Lenny ValjasDecember 1, 2011
After finishing 5th in my first World Cup sprint of the season, my weekend of racing was far from over. The next day I raced the 10km skate race on one of the toughest courses on the circuit. The weather was super windy which made it hard to ski the flat sections of the course, it felt like I had no recovery time at all. It was hard for me to warm up for this race. After such a hard effort in the sprint the day before my body felt sore and tired. During the race I felt ok, not great but ok. The hills really put the hurt on me and I really suffered out there trying to salvage my overall ranking. I finished the day in 55th spot which bumped me to 17th overall in the mini tour after two races. I was happy to remain in the top 30 leading into the final day.
The last race was a 15km Classic Pursuit start race. I had a bunch of the best distance skier starting within 15 seconds behind me so I knew it was going to be tough to keep top 30. The pace at the start of this race was pretty ridiculous, I was pretty much going as hard as I could for the first 5km. There was no way I could keep up the fast pace so I was hoping that everyone would start getting tired and slow down. For the next couple laps I skied with Kris Freeman (us), the pace was still fast but it definitely slowed down a bit. I was sitting in 30th place with 5km to go. There was a group of 10 guys about 15 seconds ahead of me, and I could hear the guys pretty close behind me. Pretty stressful… I really wanted a top 30 overall so it was go time. I started picking up the pace trying to catch that group just in front of me. As the race progressed, I started to feel better and I could see some of the other guys hurting. On the final lap, I caught up to two Norwegian skiers and was able to beat one of them to the line. I finished off the day in 29th place! top 30, Yeah Buddy!!!
Ruka triple treated me well this year.
Now I am off to Sunny Davos for the week to get some training in before the Dusseldorf city spritns next Saturday and Sunday. 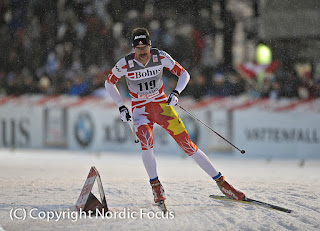