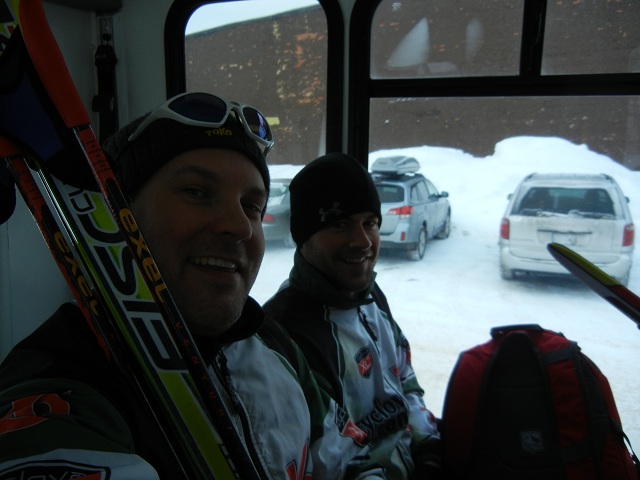 What a great time we had at the 2012 Sisu marathon!  First and foremost, it was great to make the arduous drive up to Ironwood and watch as the roads and villages became more and more utterly submerged with glorious SNOW!  In all honesty, I’ve been suffering from a few dents to my enthusiasm as this ridiculous brown winter continues to stubbornly PERSIST, but getting up to Ironwood gave me a good solid snow fix that will last me until the next big Wisconsin snowfall (which should be soon).
I have to hand out some props to Mitch and Micah who came along to do their first ever ski race and acquitted themselves marvelously (which means they didn’t have a massive crash and stab each other in the kneecaps with their ski poles at the beginning of the race).  They both successfully completed the 21 k event, and I’m pretty sure we could have talked them into doing the 42 k, but that just didn’t seem like a good choice for a person’s first ever ski race.
The above picture is Micah and I on the awesome bus that Sisu had for us to get to the start area at ABR.  My thoughts at this moment were that CyclovaXC needs a bus like this that we can use to take our intrepid skiers up for training days on the Birkie trail, etc.  I’m going to work on allocating some funds for that purpose. 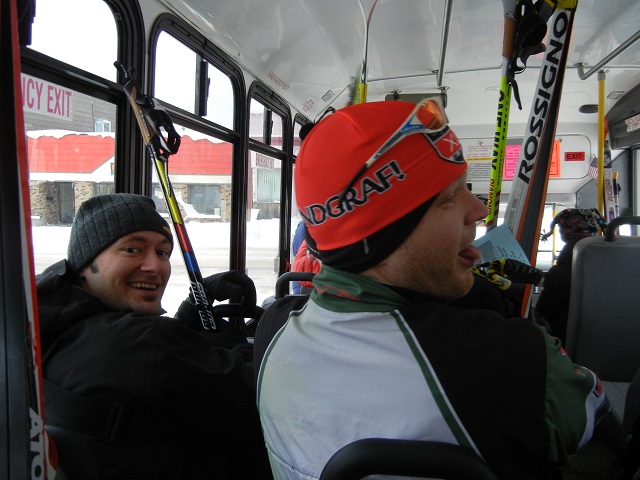 Here’s Frank and Mitch on the bus as well.  You’ll notice that Mitch is smiling here but he wouldn’t be smiling about 20 minutes later when he looked into his clothing bag only to realize that he’d forgotten his ski boots back in Frank’s car.  Fortunately, the 21 k didn’t start until TWO HOURS after the 42 k, so he had plenty of time to catch a bus back, get his boots, and come back out to the starting area.  Heck, he had so much time that he would have made it even if he’d been in the 42 k.
That was the only thing that went wrong for our immediate crew, and since he made it back with ample time to spare, it was a totally acceptable problem to have. 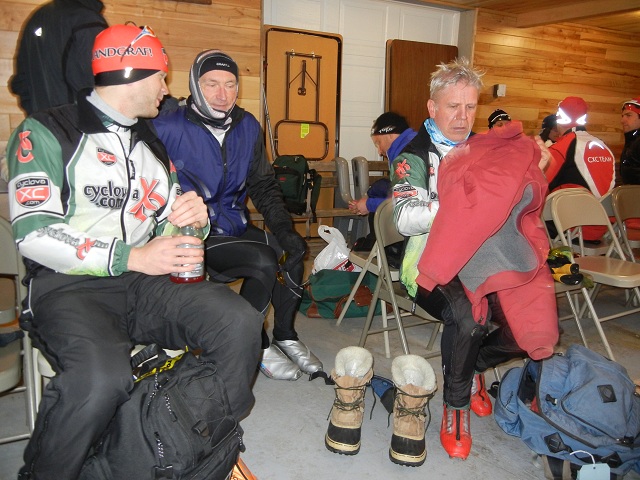 Here’s Dwayne and Frank in the ABR warming hut that I wasn’t even aware existed until they ushered us into it upon our arrival.  Dwayne had a great race despite the fact that he was running around frantically looking for his pole just before the gun (he found them with about 30 seconds to spare and kept the adrenaline pumping throughout the day I think).

The start of the classical race.  I took this picture from a distance and had to zoom in for the skiers to fill the frame, that’s why it’s a little pixilated.

More from the classical start. 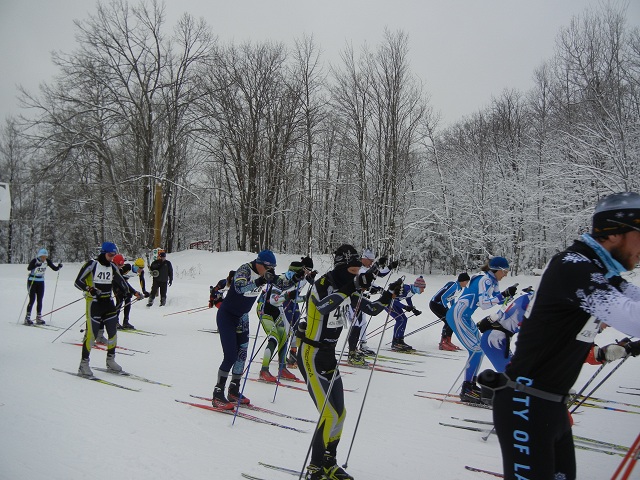 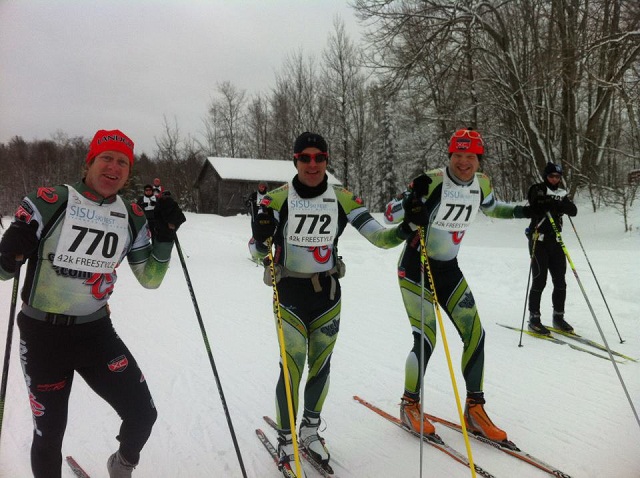 Here are Frank, Allan and Adam.  I believe we had a total of 9 CyclovaXC skiers at the race.  Great turnout!  Just a little while after this image was taken, Adam and Allan would be laying at the bottom of a massive crash with Allan’s ski pole digging deeply into Adam’s knee (they’d both get up to complete the race, although Allan would go on to break a ski, and throw 30 of the 80 lbs of equipment he was carrying to the ground in disgust).  Nobody’s saying anybody was responsible, the only explanation that I heard was that Allan “hit a soft spot.”  Frank, anticipating that something like that might happen, had lined up about ten feet away from Allan, and thus escaped the carnage to begin his race free and clear. 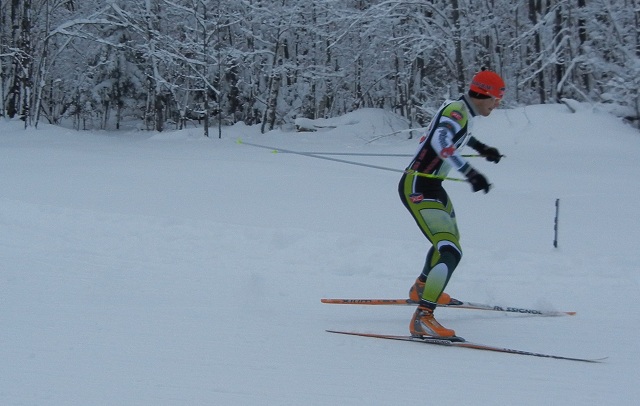 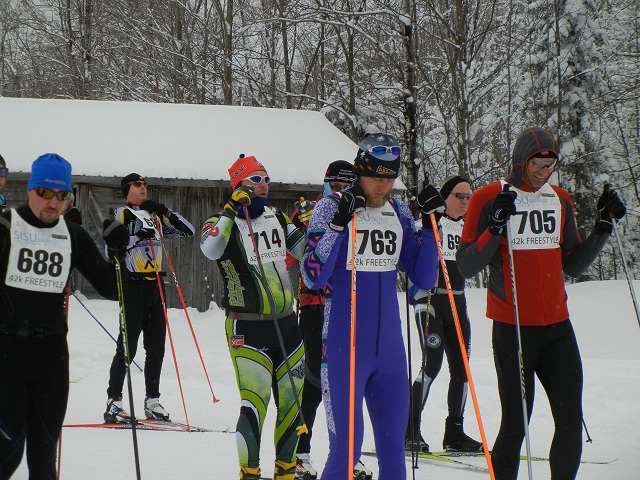 There’s me waiting for the race to begin.
All and all I have to say that the Sisu marathon is a fantastic event.  The snow was a little bit slow and the trail was just a little bit soft which made for a tough ski, but it was terrific to simply be out on snow and getting some much needed k’s under the belt.  For those of you who haven’t done the Sisu marathon, it’s really one to put on your calendar.  The first half of the trail is extremely challenging with some fairly technical descents.
If we don’t get some snow here pretty soon, we might all be headed up to ABR quite a big over the upcoming weeks.  Tomorrow I’ll tell you all about the hotel that you don’t want to stay at when you go there.