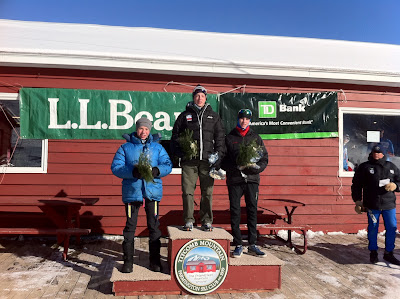 Koby on the podium with the win!

We had a great weekend up in Farmington, ME for the second Eastern Cups of the year. On Saturday afternoon, we had Katharine, Issy, and Hamish all racing in the open heats (top 30 racers overall). Despite getting knocked out in the quarters, each of them skied feisty races in their respective heats. Murph & Gino qualified for the junior heats (top 12 juniors not in the top 30) and skied well (see photo below of the two of them fighting it out in the B-final). Pip & Tess also got to mix it up with the rest of the J2s in the heats. Double pole specialist Pippin hammered around the course and skied her way into the J2 B-final. Racer of the day went to Tess who skied an aggressive semifinal, placing second, and earned herself a trip to the A-final. 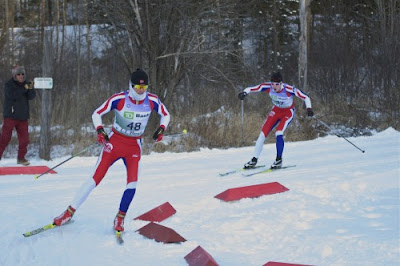 Gino & Murph rounding the turn for the finish in the B-final. 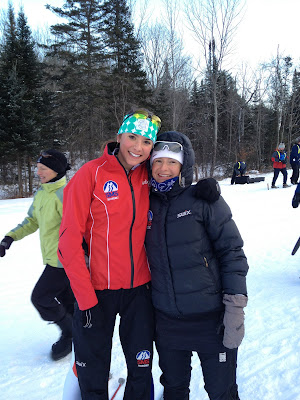 A very happy Tess after the J2 A-final.

On Sunday, for the freestyle distance race skiers did 3 (J2s), 6 (women) or 8 (men) laps around the base and up and down a steep section of Titcomb Mountain. Koby started things off on a high note for the team with his second win of the season in the J2 boys 5k. Koby skied a smooth race and got a nine second win over Ben Hegman. Hamish’s younger brother, Gavin, rounded out the podium with a great race for third place. 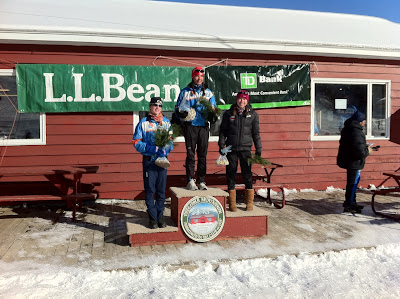 Katharine on the podium in second place.

Katharine, Tess, & Pip kept it going with 2nd, 12th and 14th place finishes for the girls. Katharine sandwiched herself on the podium between two CSU girls – Julia Kern & Zoe Snow. 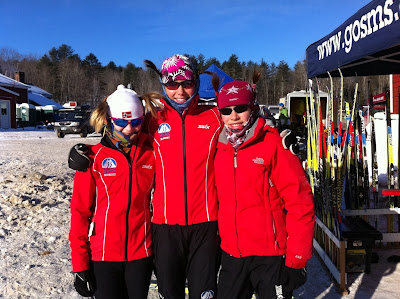 The older kids were led by Issy with a stellar 6th place result. Issy started off smooth and conservative – first lap in 30th place – and then picked it up on every lap, dropping her splits to 20th place, 17th place, and inside the top 10 for a few laps before settling in 6th as the second junior. Mollie and Kate skied well too – 35th for Mollie & 52nd for Kate (6th J1!). The field was full of the regular high school crew on the Eastern Cup circuit, plus the Green Team, a few girls from Sun Valley, and several college teams (Williams, Bowdoin, Bates, Colby, UNH).

Gino set the pace for our boys, starting off with a few blazing fast laps behind Green Team skier Tim Reynolds. He stuck a solid pace for the rest of the race finishing as the 2nd J1 (31st overall). Corky skied a nice race for 55th place – steadily pacing the 8-lap race. Calvin was feeling a little under the weather and wanted to at least start and see how things went…and they went pretty well! Calvin finished 64th (9th J1) and charged up the hill each lap. Charlie (who had to ski two laps without a pole basket) and Murph rounded out the guys team with 79th and 85th place finishes. Hamish looked good for 3-4 laps, but had his back tighten up and made the smart call to pull the plug mid-way through the race.
We were missing a few skiers this weekend due to illness so we’re looking forward to a nice long stretch of training and rest and getting everyone healthy before Stowe. Check out some nice photos of the weekend on Flying Point Road. 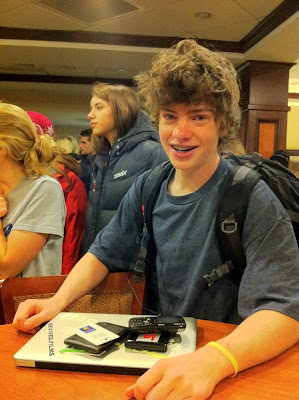 We were woken up very early Sunday morning by the fire alarm in our hotel. While waiting for the OK to return to our rooms, Tyler shows us what he couldn’t live with out: a full backpack, wallet, cell phone & the Revived Films hard drive. Don’t want to lose all that Nationals footage! 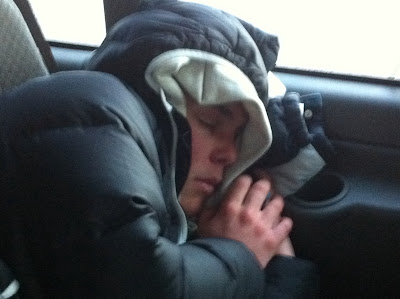 All tuckered out for the van ride home. 🙂
Heather & Paddy have their first race tomorrow in Innsbruck – 5/10K classic race. Check up on them tomorrow morning on the YOG website when you wake up! Paddy will be wearing bib 43 (out of 49 racers) for his race (11:45am start/5:45am EST) and Heather will be bib 32 (out of 40 racers) for her race (10am start/4am EST). Racers appear to be seeded by FIS points in reverse order – lowest points go last.
SMS senior Quincy Korte-King is competing for the Canadian snowboard team in Innsbruck this week and finished 5th in the women’s halfpipe on Sunday! Congrats to her!