I was interested (rather than offended) to read about Noah Hoffman’s pacing strategies in Sunday’s classic WC race. I have a limited supply of data on split times (what I do have is thanks to Jan over at worldofxc.com, though) so the following data is definitely incomplete.

Hoffman seemed determined to not start too fast, something that apparently he does quite often. Since pacing interval start races is so much different than mass start or pursuits, we’ll only look at his splits for interval start races. I only have split times from a total of eight WC-level interval start races for him (of varying lengths). Here’s a simple graph showing them all together, with Sunday’s race highlighted with the black dashed line: 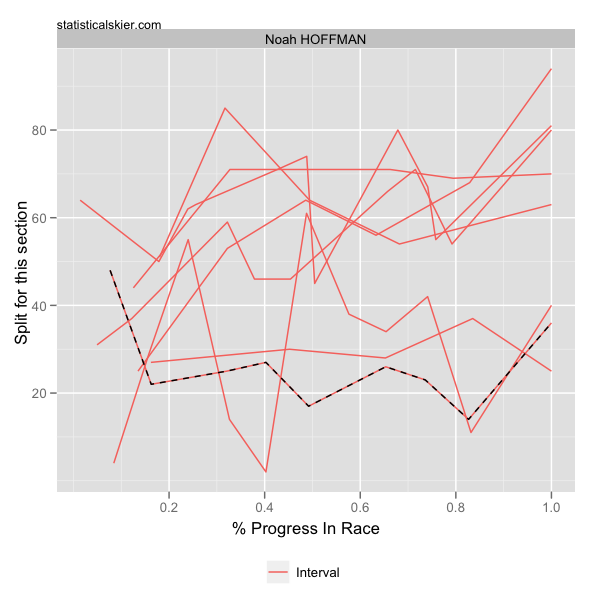 This is a very crude representation of split times, where I’ve simply plotted how fast Hoffman skied each timed section compared to the field. So, for example, the y-axis means he had the 20th fastest, 40th fastest, etc. split time on that section.

In order to compare races of different length I’ve converted the x-axis from raw kilometers to a percentage of the total race distance. (This may be dubious, since pacing strategies will be markedly different in a 15k versus a 30k. However, these data consist of two 10k’s, five 15k’s and only one 30k, so I think we’re on fairly safe ground.)

Certainly Noah’s first split was slower than his subsequent splits on Sunday. And it was the 3rd slowest initial split of the eight I have. But it seems to me like he proceeded to ski the rest of the race fairly consistently, rather than gradually accelerating. At least, until he faded a bit on the last section.

This is in contrast to several of the other lines here that begin with fairly quick initial splits, but by mid-race he’s clocking only ~60th fastest time on each section or so. So whatever he did seemed to work.

I should say that I’m fairly cautious about my ability to analyze split times. I’m sure the coaches are keeping more detailed data on this sort of thing than I have access to. But it’s interesting, nonetheless.