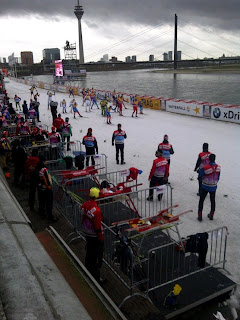 The weekend after the Ruka Triple I raced the city sprints in downtown Dusseldorf. My individual sprint went pretty poorly. My preparations leading into the race weekend were brutal. I was planning on doing my pre race intensity on the racecourse on Friday, but as it turned out, they still had not put down any snow on the course so I was forced to skip the intensity and just run instead. I felt so flat and slow in the qualifier and missed the top 30 by over a second. I hate missing the heats; it is the worst feeling ever. I couldn’t stay upset for too long because Drew and I had a big team sprint race the next day.  I was feeling much better the next day in the team sprint. In the semi final Drew and I skied smooth and easily advanced to the Final.
I had a really good feeling about the final. Drew was skiing incredibly strong all day and I was feeling much better than the day before and wanted some revenge on Dusseldorf. The Final started off really tactical. The pace was really slow and we stayed in last place for the first 4 laps of 6.  There was no need to try and make moves early on, it just would have wasted energy. On Drew’s final lap the Swedes attacked and spread the group out. Drew was able to get by a bunch of teams and tag off to me in 5th place about 4 seconds from the leaders. I started the last leg of the race quick because I knew there was a group of guys right behind me. I caught the 4 leaders mid way through the lap. One Austrian skier got by me so coming into the finishing stretch I was 6th. I made a big push and was able to pass the Austrian skier just before the finish ending our day in 5th just four seconds from the gold medal. I couldn’t have been any happier. The top 6 teams were invited on stage to the medal ceremony after the race to receive our giant cheques. I feel like Drew and I both skied well and exceeded our expectations. 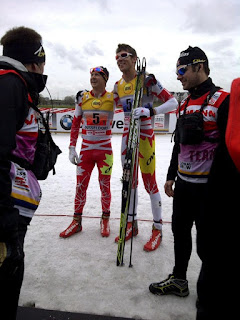 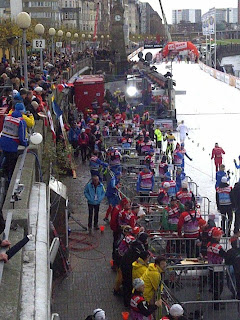 Davos:
I had some more bad luck in Davos a week later. I had no problem qualifying for the heats this time. I crossed the line in 14th place 2.5 seconds from the lead. I made sure I had a good pre race intensity.  In the quarter final I was in perfect position, I was sitting in third place with 300 meters to go. My skis were much faster than the other racers so I knew with the downhill finish I could pass at least one skier. On the tightest corner in the race I was following the leaders when a Finnish skier came tearing up the inside taking both of us out of the race. I went from being right in the fight to move to the semis, to finishing dead last…  I have never had a fall in a sprint race before. It is such a rough way to finish your day. I feel like I did everything right but just ran into some serious bad luck.
It was really awesome that my parents were able to fly out and see me race these last couple weekends. It was a treat to see them since I will not be coming back to Canada until March.
Rogla:
I was planning on doing both the 15km distance race and the sprint this weekend. On the Friday before the race, I woke up with a sore throat. This is the worst feeling to have the day before the race. I pulled out of the distance race and sat in bed Friday and Saturday. I tried to go for a run on Saturday evening, but I didn’t feel that great. On Sunday morning I was feeling surprisingly better, good enough to try the race. Warming up my energy was actually pretty good. I somehow managed to fight my way through the qualifier and make it into the heats ranked 23rd. The top 30 were separated by only 3.9 seconds. I am pretty sure that is a new record for the tightest qualifier.  In the quarterfinal it took me a while for me to feel good. I skied the whole way at the back of the group until the final 200 meters where I was able to pass a Swiss and a Swedish skier to finish 4th in the heat and 18th overall on the day. I was happy with this result considering I was lying in bed the past two days.
I will update photos asap, my internet is super sketchy.

Bjoergen Has the Power In Toblach