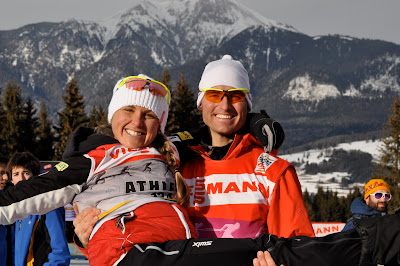 I made it to the top of the Alpes Cermis! Yehaw!
Ten years from now I can just picture myself laughing, in reflection: “Remember the time when I race the entire Tour de Ski with a broken wrist after falling on Christmas Day?!”  I can even chuckle at this feat now, as I stare at my computer over a cup of coffee.  The dust has finally settled. I have a while before another race attempt.  Rob is on a plane home (I hope to see him in April!) I am away from the team for the first time since flying to Europe mid-November. 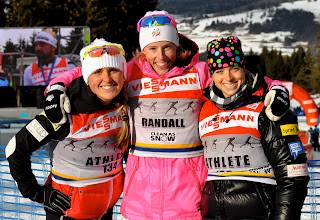 Teammates and finishers! Me, Kikkan & Liz
Yep. While the Canadian men’s team is lying on the beach in the Canary Islands I opted for my own version of R & R. Months ago I remembered getting an email from my friend Kathy announcing that her and her husband were selling everything and moving to Italy.  Back in the day I got to know Bill & Kathy when I coached their two kids at West High School.  Since then Kathy has been a member of my women’s group back in Anchorage.  Part way through the Tour I was able to track down some contact info for them (with some help!) and they agreed to let me crash out at their house for a while. I’ve only been her a few hours but it was incredible to sleep in & walk downstairs and make what I want for breakfast, when I want it. When opening their cupboards I find familiar things like Life Cereal, Organic Valley Milk & El Paso Taco Shells.  This funny mixture of Italian and American is a result of Kathy’s job working as a school nurse on the Aviano Military Base.  They have access to the commissary grocery store where I suppose, they feel the need to offer American things to the Americans working here. 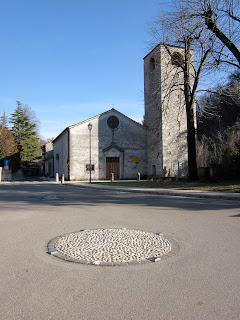 Here is the “traffic circle” in the small town that they live in…. while they’ve been going non stop since moving here, the pace of Italian life is slow – which is exactly what I need right now….
Kathy & Bill are some of the most gracious, kind people I know I am so grateful to have a “home away from home” here in Italy. There is no snow here in Aviano but funny enough, Kathy brought her roller skis from Alaska so I might take a spin on those later this week!  (You’ve gotta love those Alaska girls!)  It’s been really fun so far to take a peek into their new lives and I am incredibly thankful that they’ve accommodated me so much. It’s been fun to bit** about the aspects of Europe that are tough – for example, the inability to get anything done. Here in Italy everything is “Domani, Domani” which means, “tomorrow, tomorrow!”  When living life on the road (such as I am) you must become accustomed to a lack of productivity. For example, it may take all flipping day to figure out how and where to do a load of laundry.  Back home in the states, laundry would be one of 101 things you might get done any given day. They can relate to bad Internet, the ten hour time difference, and the difficulty of staying in touch with loved ones back at home. 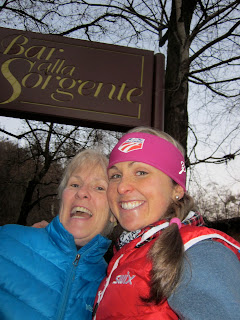 Here I am with Kathy on a walk….. mandatory machiatto stop along the way…. 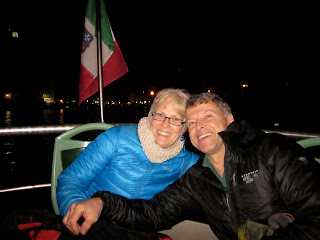 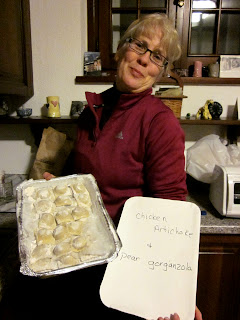 Kathy is the perfect mixture of mom and friend…. it’s so nice to be spending some time with people from home.  This night we had Kathy homemade ravioli for dinner – each ravioli made with loving care!
Enough about laundry & ravioli and back to the Tour!!
Finishing the Tour, and reaching the top of the Alpes Cermis with a bib on was a huge goal of mine.  I’m not going to lie. It was really, really tough but not as tough as dropping out would have been for me. A friend sent Rob an email telling him about a German saying that basically says, the pain of racing is temporary and the pain of quitting lasts forever. I agree whole heartily with this statement and it became somewhat of a mantra for me during the 11- day tour. 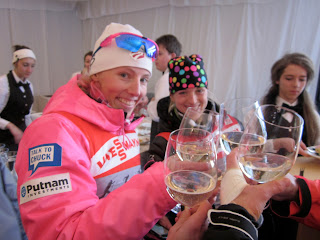 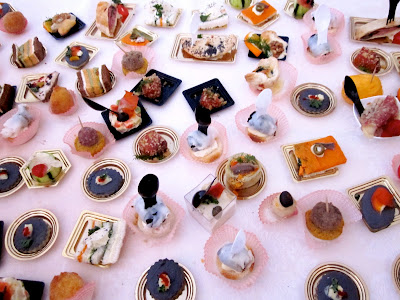 Just a sampling of the food they had in the VIP tent at the top of the Alpes Cermis!
Each day I had to put my ego aside and accept that my results weren’t what they had been earlier this season.  Each day I questioned myself, trying to figure out if I was doing the right thing. Was I hurting myself by continuing to race? Was turning in sub-par results adding or taking away from my case? All I knew was that I love to race, I have worked my butt off to be over here, racing in Europe. I knew that there were many, many other ski racers who would have loved to be in my position. There were also countless people back at home who had gone above and beyond to help me be here, racing the Tour. 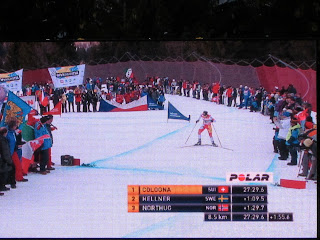 Devon Kershaw powering up the last part of the climb – in places, the grade was 28% which required everyone, even the top men to “granny skate.”
Early on, even before I had my proper diagnosis I knew that I would finish the Tour if it killed me. I owed it to myself, my family & friends, my coaches, and my teammates.  My visual through all of this is one of those little sea snails that hooks onto a rock and won’t let go, despite the crashing waves on it’s back. Even though there were some significant odds against me, I got back on the starting line each and everyday. 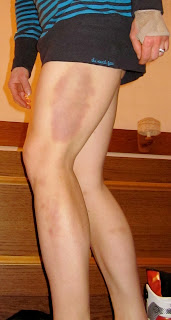 In the Oberstdorf pursuit I had a bit of bad luck…. I had a great start to the race & my skis were good. Then, literally one minute into the race the group went down a big downhill with a turn at the bottom. All the girls in front of me start “power-plowing” (snow plowing) like mad and I felt like I was going to smash into them. I quickly busted out a snow plow too – but it was too quick. I caught an edge and went down really, really hard. I got up quick but lost all my momentum and the entire field was gone. I was absolutely dead last by 100 meters. I then spent the rest of the race trying to catch the entire field that had one another to work with and draft off of.  This picture doesn’t quite do my legs justice but needless to say, they were bruised. Liz said I had “alpine bruises!”
Some days I would look at the results, and some days I would simply walk away from the finish line, choosing to reflect on my race via technique, feeling, and subjective analysis.  The objective number, place, and time back doesn’t always help.  I looked at each race as a learning opportunity. I learned a ton about new venues, new formats, and my competitors. Each time someone passed me I would take a mental note of what they were doing differently.  The last venue, at Val di Fiemme, is also the site of the 2013 World Championships. While I’m not particularly proud of my individual performance there, I have now raced the course where a new World Champion will be named next year. I now have an intimate and personal knowledge of the hills and how to prepare to take them on next winter. 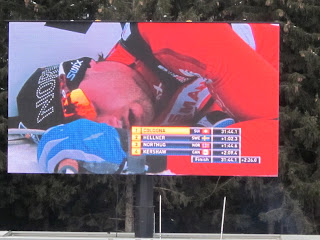 Petter was tired at the end of the climb…. I have to admit, it was fun watching Hellner pass him!
Cross Country skiing, and really most sports are full of competitive people, people who do each and every little thing in their power to “win” the race or come out on top. While we might not like to dwell on this fact, our goal is to beat our competitors and often a good race necessitates having one’s name above that of their competitors on the results sheet. 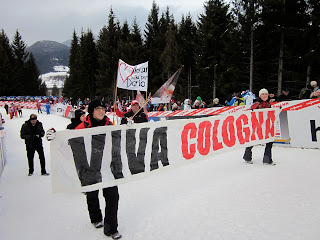 Dario, the eventual men’s winner has quite the fan club that travels from venue to venue. Once the men’s race was done his fans marched up the race tracks playing gigantic swiss bells in celebration! 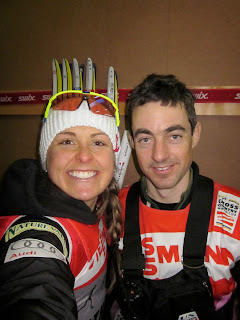 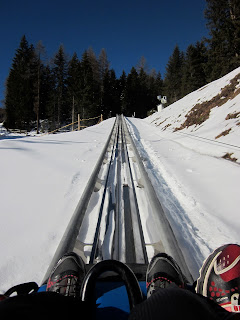 Going up the Alpine Slide 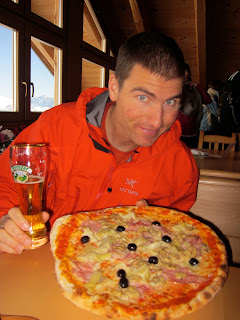 Rob with our Italian Pizza 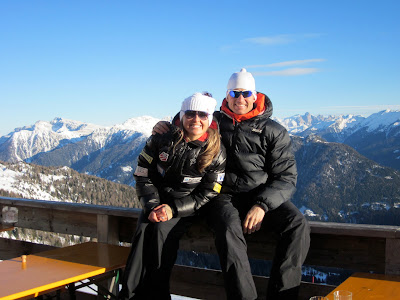 Sitting in front of the Dolomites