A couple quick notes about some sprinting results.

Kershaw’s having a heck of a season. On of the things I’m been most impressed with is how much his sprinting has improved, which is something I feel like hasn’t been mentioned much in a lot of the coverage: 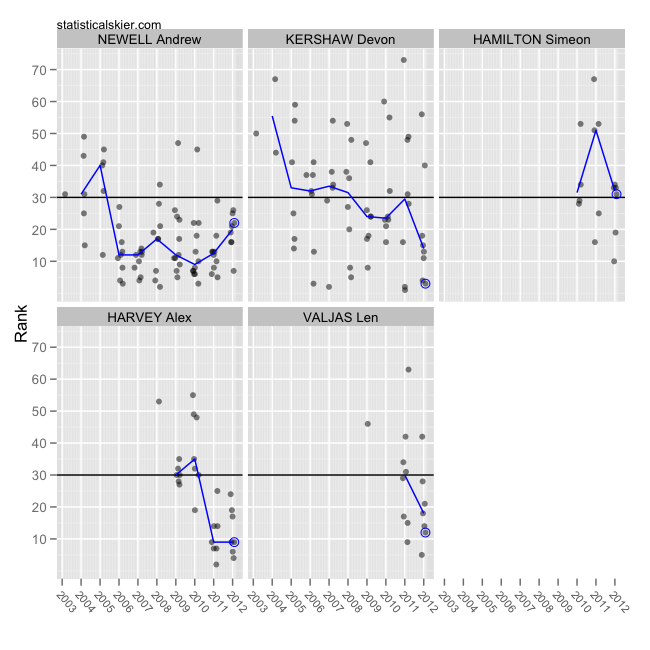 The circled result in the most recent Moscow sprint. Notice how while Kershaw’s median sprint result was improving somewhat between 2006 and 2010, his best result was actually getting somewhat worse each season. Then he had a very inconsistent season of sprint results last year. He hasn’t completely solved his occasional poor qualification effort problems, but look at how much better and more consistent his results are this season.

I threw all those other guys up there just for comparison.

I’m a little concerned about Newell. This will mark the second season in a row of his median result moving in the wrong direction. He still has no trouble qualifying, generally speaking, but for a guy with a reputation of struggling to advance through the heats, that trend is worrying. Len Valjas is qualifying much more consistently, which is a significant improvement.

I made the graph below several weeks ago around US nationals, but have been somewhat hesitant to post it. Once again, Torin Koos won a US Nationals sprint race and (kinda) won the other as well. Ever since Koos left the USST, every time he skis well domestically there’s lots of chatter from his fans about how crazy the USST was to kick him off, etc.

While I appreciate that Koos has a lot of fans (and deservedly so) I feel like a lot of the outrage I see expressed on his behalf assumes that his international results were more accomplished than they really were. Here’s what I mean: 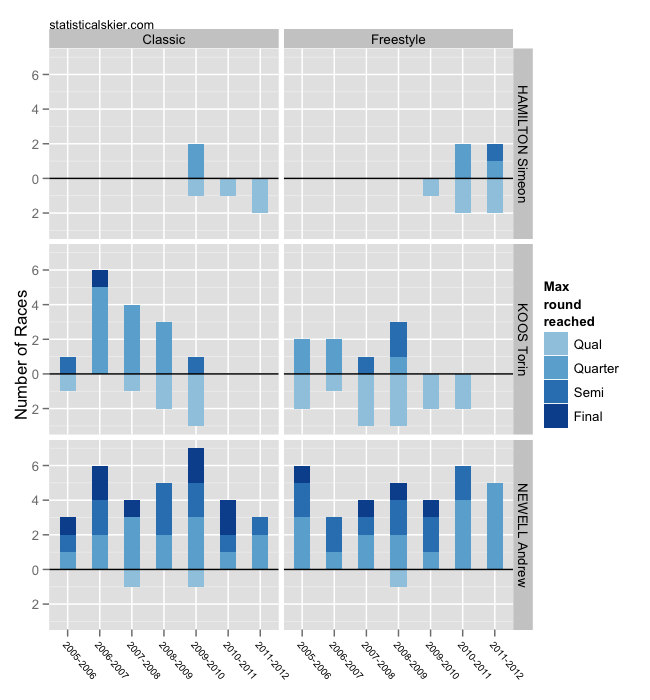 This plot show the number of WC level sprint races (truncated at 2006 to consider a single race format with 30 qualifiers) where each skier advanced to a particular round.

Newell, as you might expect rarely fails to qualify for the elimination rounds, but only occasionally reaches the finals. This season (so far) appears to be worse than usual on that front.

In freestyle sprints, Koos was failing to advance past qualification around half the time, and never made it past the semis. But the real story are his classic results, which were on a dramatic decline after 2007. As it was, it wasn’t like he was advancing past the quarters all that much.

I want to be clear here that my point is not that Koos’s results were bad necessarily, just that I don’t think they were as good as a lot of his fans think they were, and that there was clear evidence that they were trending in the wrong direction.

One of the most awkward and uncomfortable aspects of running this blog has been talking about US and Canadian skiers who have either had bad results, or who’s results are not as good as conventional wisdom would suggest, in my opinion.  Which is a little weird, because it’s not like I actually know any of these folks. But since I have swum in those general waters, we surely have friends in common, so it still feels awkward for me. I’m not sure why I point this out except that maybe it soothes my conscience a little bit.