FasterSkierFebruary 19, 2012
Sectionals is the 2nd biggest day of the year when it comes to High School Skiing here in NY. Their is a lot on the line and as usual you find out what people are made of. You could win every race of the year but when it’s on the line will you come through? This year the 2 most dominate skiers in Section 5 did just that ! Eric and Alyssa have been on top of the results list all year and Monday was no different ! They are both deserving champions and representatives of their High School programs. Lucky for us they are also part of Rochester Nordic Racing ! They have been a part of the program almost from the start and it is a testament to themselves, family, friends, and coaches that they have been able to be successful ! 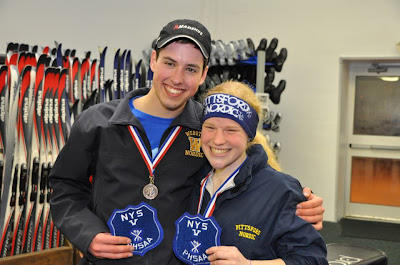 (Alyssa and Eric 2012 Sectional Champions !)
One of the reasons that Sectionals is such a pressure packed event is that you throw all the season results out the window and it’s a one day showdown to qualify for states. If you finish in the top 12 your headed to the big show if not your a spectator. You could argue that it is not fair or you don’t like it but that’s the way it is !
Luckily in a sport like nordic skiing hard work is often rewarded and this year was no different. It was pretty obvious in many ways that the athletes who have been making an effort to become better are doing better.
This year R.N.R athletes were stacked in the top 12. On the girls side Alyssa led the way claiming the over all victory Margot had a repeat performance from last year and finished 3rd, Colleen had arguably her best race of the year to finish 4th, Emmy was 6th, Jenna 10th, Maggie 11th and Hanna 12th, Just out for the 2nd year in a row finishing 13th was Katie ! Sara also had a great race finishing in 18th followed by Megan in 27th and Jenna in 29th.
The biggest story of the day was that the Mendon girls were ahead of HF-L in the team score. I’m not sure when if ever HF-L had not won sectionals on the girls side? So the overall came down to the relay the next day where HF-L was able to get the victory and secure the Sectional Title ! ! Congratulations to HF-L ! 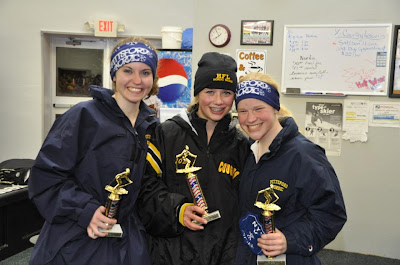 (Top 3 girls from the distance Race Alyssa, Riley, and Margot. )
The picture below is from the top 3 teams in the relay race. HF-L had 3 teams in the top 4 places but only one scores so Webster was 3rd ! I really like this picture because EVERY GIRL EXCEPT 1 attended an R.N.R Practice this SUMMER ! ! A picture is said to tell a 1000 words but this one probably reviles more than that! 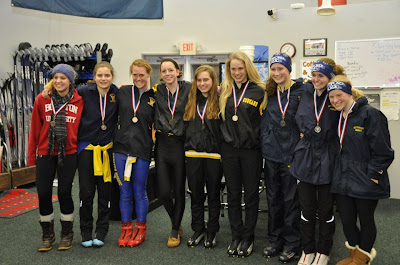 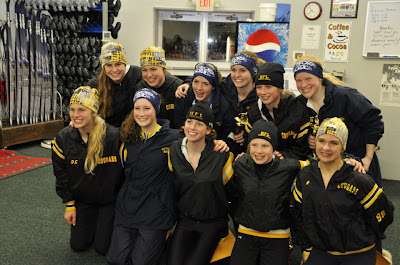 Girls State Team ! Lot’s of familiar RNR faces !
On the boys side of things Eric led the way winning the race ! I’m not sure if he is the 1st Champion from Webster or not ? I will have to ask coach Weston but Eric has brought Webster back in a big way the last couple of years ! Just behind Eric was Langton in 2nd, Gavin in 3rd, Peter in 4th, Conner in 6th, Tommy in 8th, Jack in 11th and Marco in 12th ! Yea your reading that correctly 8 R.N.R’ers in the top 12 !! YAHTZEEEEE ! The boys of the summer have been rocking all year long and sectionals was no different great to see them make the show ! Woody had a good race and was 14th less than 10 seconds out of 12th! He has had a great season and will be working hard this summer to make his way in to that top 12! Scott also had a great race finishing 19th, Mike was 29th I think he was a little disappointed but will be back to fight again at JN’s ! 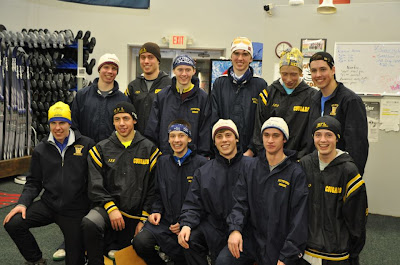 (Boys top 12)
As with the Girls the Boy’s title would be decided by the Relay and the biggest surprise of the weekend was the Pittsford Boys knocking off HF-L to win the team title ! Piitsford has been knocking on the door recently and they were able to make it happen. Congratulations to coaches Gorbold and D’Hont ! As with any high school program the coaches put in more hours than anyone and they were rewarded today ! 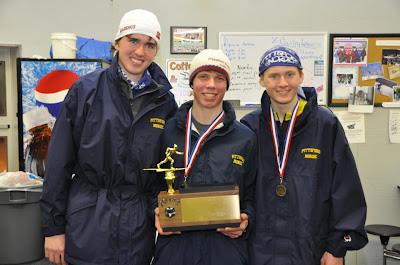 (Boys relay team bringing home the trophy ! All 3 of these guys were a part of the summer program so it was pretty awesome to see them win ! Also to note is that they all will be back to defend next year !)
I’m lucky to have the opportunity to coach all of the athletes of R.N.R and without the help and support of all the high school coaches that would not be possible. The reason R.N.R was started was to raise the level of skiing within the Mid-Atlantic division and I think we are doing that one stride at a time ! Thanks for all the support and congratulations to all of the coaches, athletes, friends and families !
Next stop Lake Placid for the State Championships !
www.rochesternordicracing.com

Remember when I said racing hurt?