Since I feel bad picking on Vibeke Skofterud twice now, I thought I’d follow that up with a look at that kind of trend among all skiers. Today we’ll look at distance results, Friday we’ll consider sprinting.

Here are the six skiers, active in 2011-2012, with the largest declines in performance (at least, as measured by this model) over the course of a season: 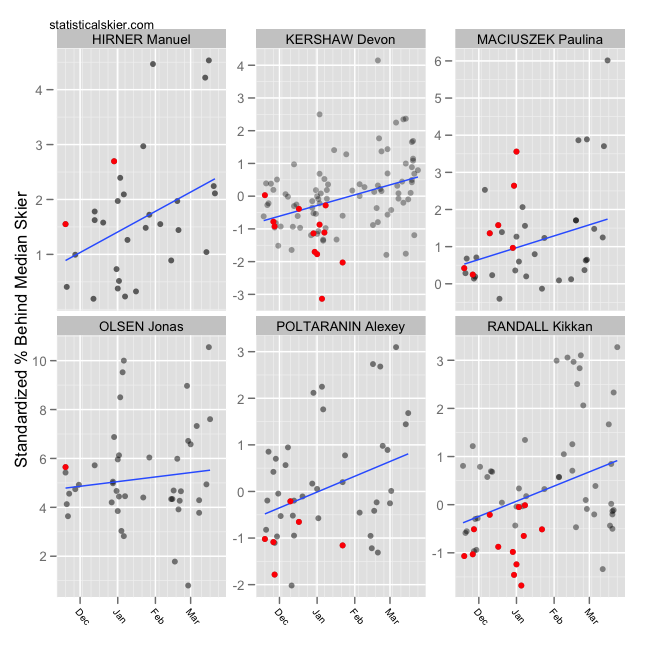 I’ve highlighted each skiers results from this season in red. Also note that while I’m using standardized percent behind the median skier, the scales on each panel are different, for readability’s sake.

Surprised to see Kikkan Randall here? Note that she has had a large number of poor races in Feb/Mar. But just as influential are the current season’s result (which isn’t finished yet). Since they’ve all been rather good, they will tend to pull down the estimate of her early season performance. Once I made this plot, I realized that it would make more sense to fit the model on only results from completed seasons. For many skiers (indeed, most of the ones I’ll show you) it wouldn’t make much of a difference, but it clearly would with Kikkan. Consider this your daily glimpse into the iterative process that is “statistical analysis”.

Notice also that Skofterud isn’t at the top of this list. So perhaps we shouldn’t be quite as hard on her for tailing off as the season progresses.

How about the folks that see the most significant improvements over the course of a season?

These tend to be skiers with considerably more races under their belts. Oxana Jatskaya is an interesting case, as her current season seems to be playing out right on cue: some “normal” early season results, followed by the terrible results mid-season. What will she pull off in February…?