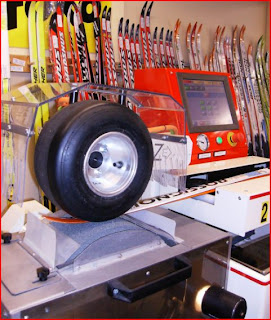 Working with machine structures on skis, there are only a few variables that can be adjusted to influence the performance of the ski. Primarily these variables are depth, spacing, interruption, and patterns.

The structure on the ski base is primarily a closely spaced lengthwise pattern of micro-grooves. Depth of the grooves varies from about 0.01mm to 0.05mm or more. Spacing of the grooves can be anywhere from 0.25 mm line-to-line and wider.

Some structures, such as those prepared on the Mantec Skinumericontrol 140, can have line spacing and depth that vary from the edges toward the middle.

Depth of the micro-grooves is critical, and can work for or against the speed of the ski. In large-grained and transformed moist snow, deeper grooves resist propagation of moisture and help to prevent the sticking due to adhesion. However, in dry fine-grained snow, deep grooves create opportunities for increased interlock friction – the fingers and features of the fine snow grains catch in the grooves. This type of friction can be imagined as being like velcro – it can be a noisy and slow experience when deep patterns are used on fresh, cold, dry snow.

Less obvious is the influence of interruptions in the micro-grooves. Interruptions in the long length-wise grooves are important to minimize capillary propagation of adhesive layers of water. In addition, the interruptions help to keep the ski from “tracking” into the snow, and help with release of the ski; this is especially noticeable on skate skis, but at the same time is more subjective and harder to quantify. 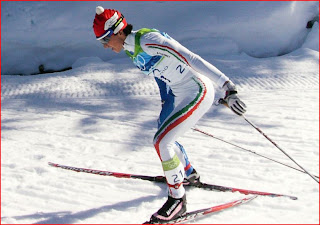 Pattern in the structure is typically the result of interruptions (also referred to as interference, or cancellation) being organized in a predictable and orderly way. Often these patterns can be visually seen as diagonal bands or chevron shapes on the ski sole. Some structures that have varying line spacing may show a curved interference pattern. Although the patterns may be at an angle, looking closely you’ll see that the bands are comprised of cancellations or interruptions in the lengthwise grooves, and are NOT diagonal cuts in the ski base.

Interruption or cancellation profiles that cross the ski horizontally and repeatedly (perpendicular to direction of travel) are a negative influence on performance. Thus, designing an organized interruption pattern is important in optimizing the glide properties. Pattern angles of 30 degrees or less are almost never seen. Also, the repetition rate of the interruption pattern affects the performance of the ski (rep-rate can be measured in spacing across the ski).

Nordic Ultratune uses the Mantec grinder . With the Mantec the variables of spacing, depth, interruption and pattern are analyzed with built-in software features. The Mantec offers unmatched precision and control.

Each winter, designing and testing structures is an integral part of my work. Within the limits of each variable, there are infinite opportunities for optimizing the structures. Testing the structures on snow is the biggest limiter in developing effective new grinds. At Nordic Ultratune, designing structures with varying spacing, depth, and groove interruptions is the key to building a set of grinds that will work in a broad range of snow conditions.

The key to fast skis is to have base surfaces prepared with with structures that are fast and versatile enough to handle a broad range of conditions.

STONE GRINDING SCHEDULE
Stone grinding work continues weekly through the whole season.   Ultratune provides same-week turn-around during fall and winter.   Skis that arrive by Thursday will be ready to ship back to you on the following Monday.

Pick a grind, fill out a work order form, and ship your skis.

U.S., Canadian Women “Show Europe That North America Can Mix It Up” In Oslo Sprint