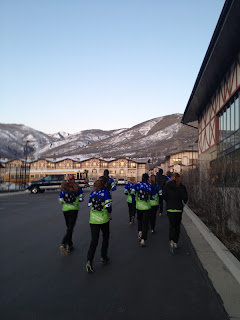 What a day!  New England came to play yesterday and took 5 of 6 golds and 12 of 18 possible podiums to tally up an impressive 446 Alaska Cup points.  Our nearest competition right now are the Rocky and Midwest teams – they skied very well yesterday and sit in second and third, respectively with 264 & 262 points.  We’re pretty psyched, but we know that all the other teams are gunning for us, so we’re ready to start fresh on Wednesday with the mass start freestyle races.
We had some nice results from the SMS crew today!  Brooke, Paddy, and Austin all took silver medals to lead the team and others on our team skied very well (made A finals, fast prelims, etc.).  I know we’ve got a few who were disappointed to get knocked out in the quarters, but they’re refocusing on the next three races.  Sprint races are tough – things don’t always work out in your favor and you have to make split second choices that might cost you a place, but every time you put on a bib you learn something, so hopefully everyone on our team, whether they were psyched or disappointed with their race, learned something that will help them later this week and for the rest of the season.
Pictures are a bit scattered – I missed most of the J1/OJ girls racing when I was shuttling J2s back and forth to the hotel, but I think we’ve got some parents who got pictures all day so hopefully we can put those up later this week. 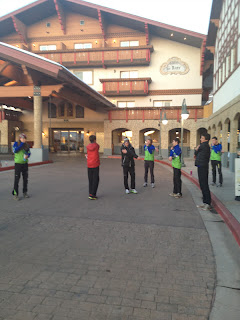 J2s started their day with a short jog and some stretching before breakfast. 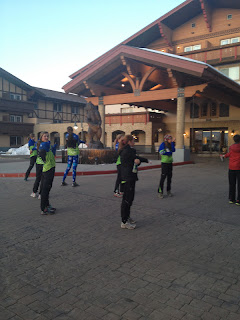 Our hotel is pretty nice. 🙂 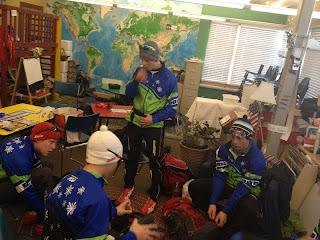 At the venue they have classroom’s for each team to hang out in between races and heats.  The J2 boys put their boots on and get off their feet before the prelim. 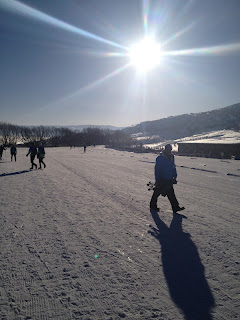 It was SUNNY yesterday.  We’re crushing it with putting on sunscreen, but we’ve still got a few people with pink cheeks. 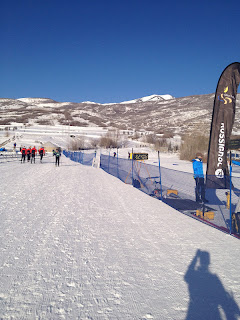 View from the start.  The sprint course went straight out and then hung left up a hill and onto a flat plateau. 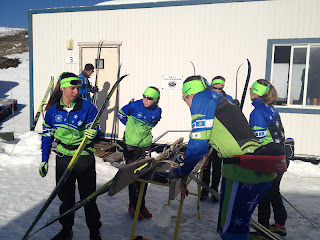 J2 girls waxing up training skis before their warm up. 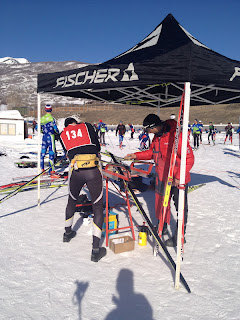 Rob Bradlee and Nick Mahood were awesome all day long touching up skis and helping athletes dial in their kick and glide in the stadium.  Justin Beckwith, Tim Caldwell, and Cam MacKugler were in the wax trailer all day long getting skis prepped and Nick Kline skied in circles all day to keep on top of what was working well so our athletes could have fast skis.  MAJOR props to the wax crew! 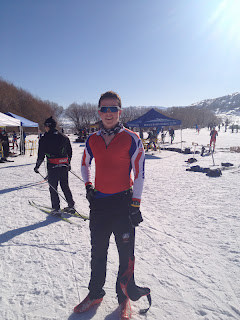 Hamish was pretty psyched to qualify 6th!  He led his teammates, Paddy & Gino, to a 6-7-8 run in the prelim.  Gino and Hamish got knocked out in the quarters, but showed they’ve got the speed.  They’re getting psyched for tomorrow’s racing. 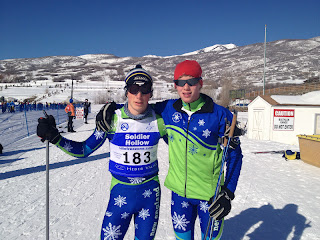 Koby and Henry Harmeyer (Mansfield Nordic) before their prelim. 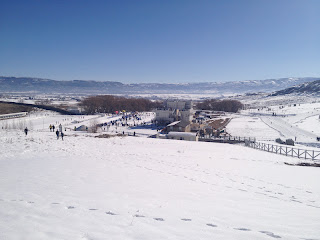 View from the top of the sprint course.  The course starts in the stadium on the left, heads straight out and then left up a short hill.  It goes across a flat section (where this photo was taken from), drops down under a bridge, up a short steep pitch and then turns left and comes down a nice long downhill (which comes into view on the right side of the photo).  Ski speed definitely was evident all day long by watching racers tuck down this stretch. NE’s wax crew totally dialed our skis and we had lots of our athletes making passes and cruising down this stretch throughout the day.  The course turns left over a bridge and then you’ve got a nice long straight away finish. 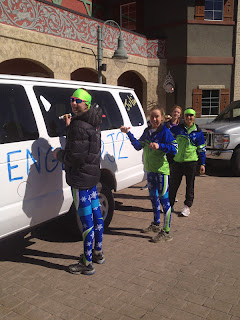 The J2s went back to the hotel to put their feet up between the prelim and heats.  Before heading back to the venue we decorated the van! 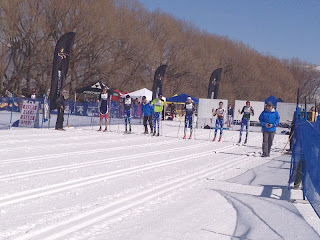 Start of the men’s OJ A final – look closely: 5 out of the 6 racers were New England guys.  Not too shabby. 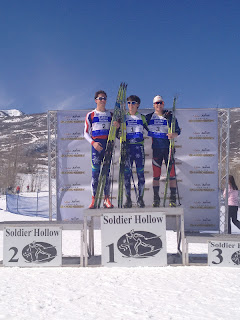 Paddy skied his way into the A final and took the silver medal – first SMS medal of JNs!  Eli Hoenig from CSU took the gold in a sprint finish to put two New England guys on the podium with Cole Morgan (IM) in third.   Hamish and Gino ended up in 13th and 14th place.  Tyler skied well – strong and snappy the whole way through – but missed the heats by finishing 42nd.  He’s pumped for tomorrow with a course that suits his strengths. : ) 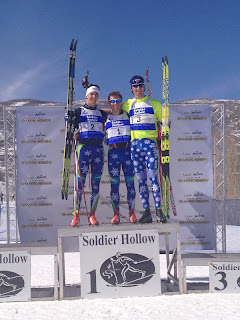 Austin Cobb (SMS alum/Middlebury) was one of five New England guys in the A final of the OJ race.  Eric Lustgarten (SLU) skied a really nice race to take the win, with Cobby in second, and prelim winner Nick Michaud from Bates taking bronze.  Silas Talbot (Dartmouth) was 4th and Hans Halvorsen (GMVS) was 6th. 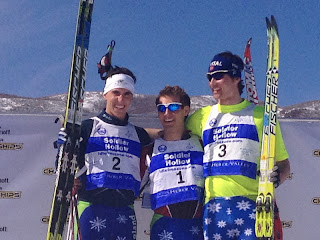 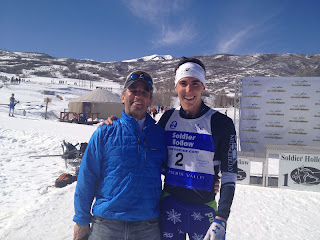 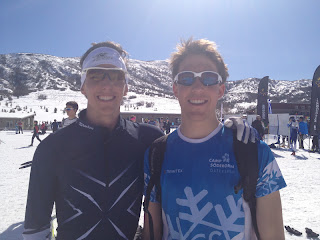 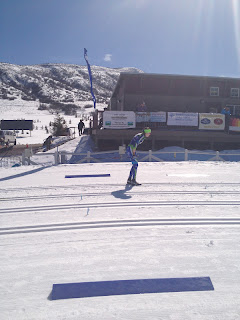 J2 girls!  Brooke and Katharine qualified 1st and 7th respectively – awesome!  Above, Brooke cruises into the finish of her quarterfinal with room to spare. 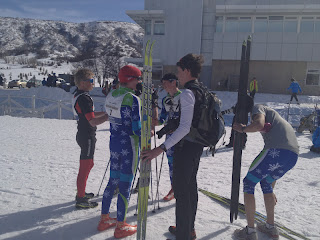 J2 boys!  Koby qualified 16th overall and skied smartly in his quarter and semi to advance to the A final, where he was matched up with his two good friends and New England teammates Henry Harmeyer and Ben Hegman. 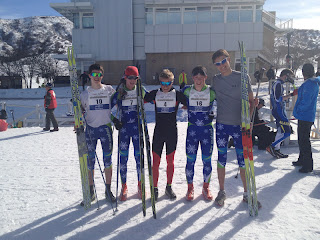 The boys skied a great race – Henry took the win, Ben was second over Cully Brown from Rocky (we saw him earlier this winter in Stowe at our Eastern Cups).  Koby was psyched with his 4th place finish!  Congrats to Mansfield Nordic for going 1-2!  Awesome! 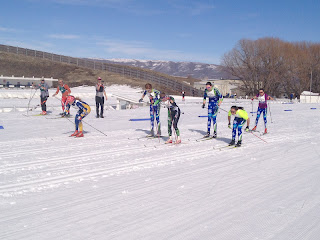 Four NE girls (Brooke, Julia, Zoe, Katharine) were in the A final! 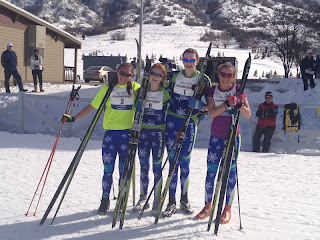 Happy teammates at the finish. 🙂  Julia took the win, Brooke was second, Zoe fourth and Katharine fifth.   Impressive racing ladies!  Brooke was second last year in this event and proved once again she’s quite speedy.  This is Katharine’s first year at JNs and I think she surprised herself with a top five result. 🙂 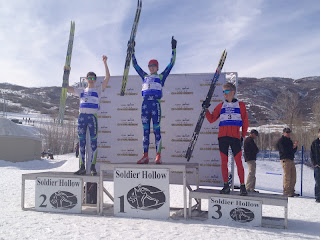 Henry, Ben and Cully on the podium. 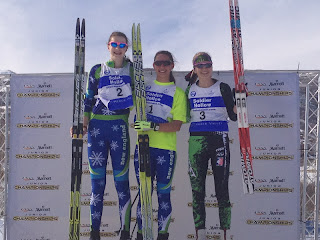 Brooke, Julia, and Alayna Sonnesyn (MW) on the podium.
I hope we can round up some pictures of our older girls racing.  I’ll try to snap some in the next few days.  In the J1 race,  Anika and Heather qualified 7th and 8th.  Anika got knocked out in the quarters and ended up 18th and Heather skied through to the A final where she finished 4th.  In the OJ girls race, Rachel and Issy qualified 3rd and 24th.  Rachel made it through to the B final where she took third in her heat to finish 9th overall.  Issy got knocked out in the quarters, but did well enough in her heat, so she improved her placing to take 14th overall.
Tomorrow we’ve got mass start freestyle races on the schedule.  J2s do 5k, women do 10k, J1 men do 10k, OJ men do 15k.   Stay tuned for more photos!