Erik BjornsenMarch 6, 2012
Thats right, I just spent a week in Switzerland. In one of the most beautiful towns I’ve been in, Fuetersoy. It was a really fun time, we had four days before our races and our goal was to ski a lot of kilometers to keep up our training. This is a great way to get good views in and around town. The trails are scattered all throughout the valley and go from town to town. We didn’t have a trail map so it was just finding a trail and exploring to see where it goes. One day Reese and I got on a trail that climbed up one of the sides of the valley. We hadn’t planned on picking a trail that climbed for two and a half hours but by the time we figured out it was just going to keep climbing we were half way up and the views were getting amazing. We figured we might as well try to get to the top. It was worth it the view on top was one of the best I’ve ever seen, 360 degrees of beautiful swiss alp mountains. 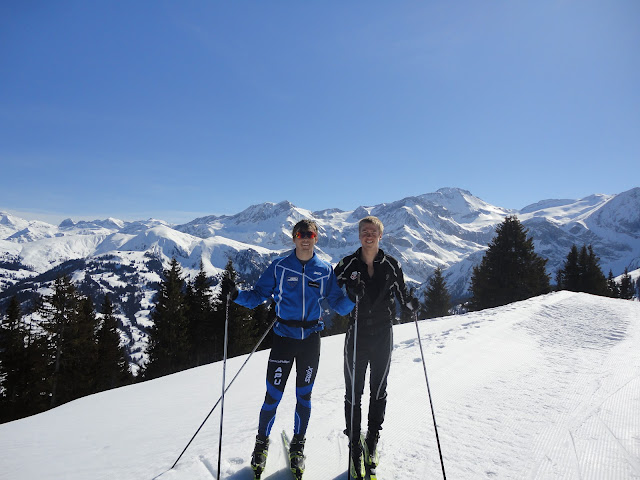 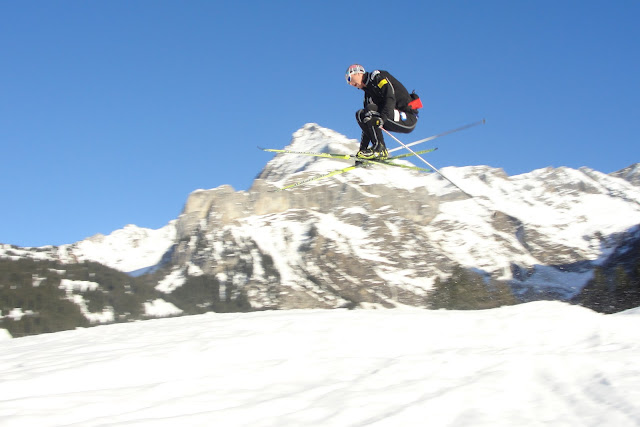 Picture 3 from long ski.
The first race was on Saturday and was a skate 10 km individual start race. I started near the back of the field with Brian Gregg, my fellow methow racer, and Tad Elliott right behind him. Tad Elliott is fresh of the American birkebeiner win. We had 30 seconds separating us, both are very good skiers and my goal was to not let them catch me. I didn’t succeed, they both caught me about the same time right around the half way mark. I got a good ride with them for about a kilometer and then I had to say goodbye and let them go or I was going to completely blow up. I finished the last kilometer strong and ended up in 8th, third American. Tad was 2nd, Brian 5th, myself in 8th, Reese 9th, and Pete in 11th.
The second race we had was a classic mass start, the under 20 guys skied 10 km so today there were about 15 guys in the field. Yes, this may sound like kind of a wimpy little local Switzerland race that the U.S guys came to boost their confidence as they beat up on the locals, but that’s not true, it was a competitive group. The field probably had more World Cup starters then most Super Tours and it wasn’t going to be easy to finish in the front half of the field, I failed to do that the first day. The temperatures were high when the men started at 10:00 am. We all lined up in a chevron behind Remo Fischer. Right as they gave the one minute warning we saw our fellow American Becca Rorabaugh finish in first. After I saw that I was determined to go out there and hold on to the lead pack, I wanted the Americans to take both the wins. For the first lap Peter Kling and I lead the charge around the double tracked 5km loop. We were using team tactics slowing down when we felt like it and boosting over the tops of hills. It wasn’t long before Remo Fischer, the world cup bronze medalist could see what we where doing and made a serge past us. For the next lap myself and two other young swiss guys chased him but we fell off about 10km into the race. The chase pack then turned into two, myself and one other swiss kid. I had followed this kids results, he was one year older then me he had beat me several time but I had just edged him out at U23 Championship in Turkey. I was determined to drop him on the last lap. He had faster skis then me but I had better kick, so I waited tell the last 3km, which was mostly gradual up hill and I slowly put time on him. I was able to finish in 2nd, 18 second behind Remo Fischer for my best ever FIS point race. Tad came in shortly behind me in 5th, Reese 6th, Brian 7th, and Pete in 9th. Pretty good day for team USA! 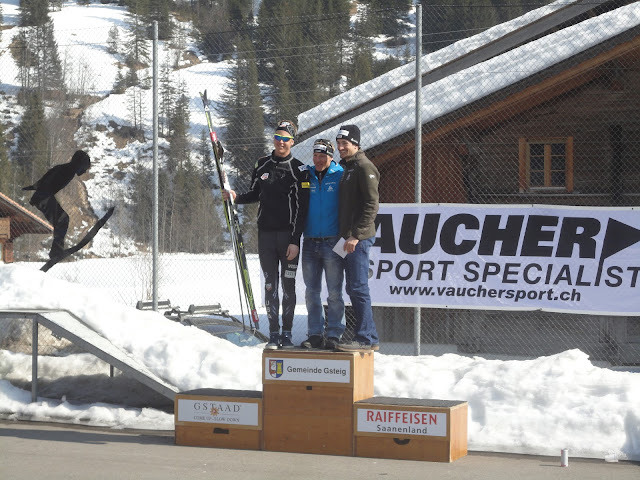 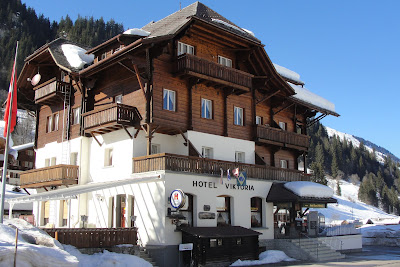 We stayed at the Hotel Victoria. 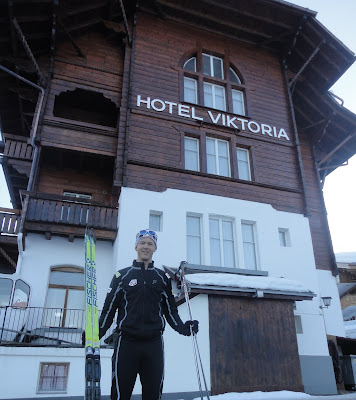 A really nice couple owned the place. They made us some amazing authentic meals. 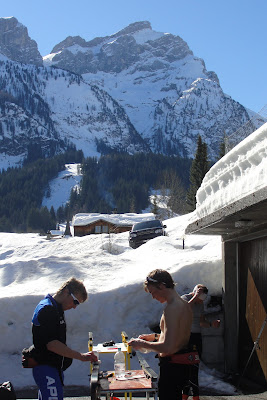 We waxed right outside the hotel, somedays shirtless. 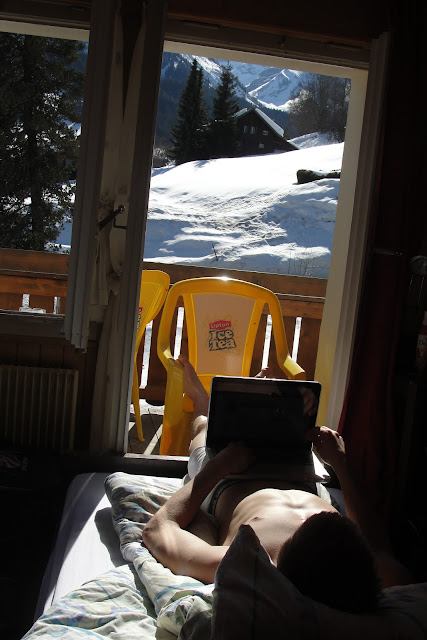 Laying on my bed soaking up some sun. 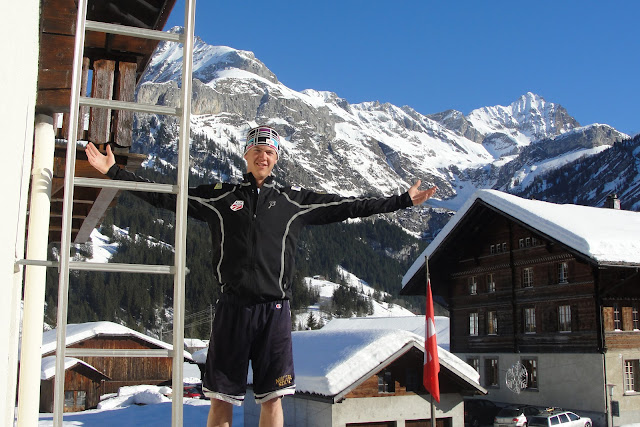 Great view from the bedroom porch. 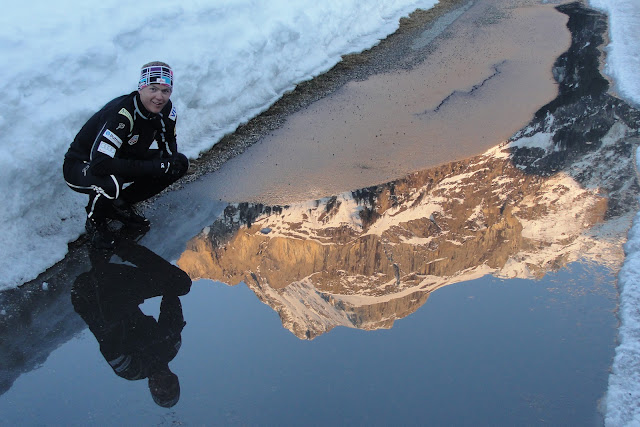 On a run in the afternoon.