Let’s start wrapping up the 2011-2012 World Cup season, shall we? First, we’ll look at skiers who made the largest jumps, either up or down, compared to last year, beginning with the men’s distance events.

As always, you get somewhat different lists of skiers as the “most improved” depending on what metric you use. My calculations actually combine 4 different measurements (finishing place, FIS points, percent behind median skier, and another more aggressively scaled version of the median percent back). But I can only really plot one at a time, so I’m only going to show you the graphs of percent behind the median skier for each athlete. Also, I’ve scaled all the metrics so that improvements at different levels are roughly comparable (i.e. improving from 10th to 5th versus from 40th to 20th). It’s a little more democratic that way.

My other reminder is that there are several ways in which a skier could “improve” in a numerical sense: their typical, or average result could improve, they could have more really good results, or they could have fewer really bad results. Not all of those are guaranteed to happen at the same time. Here we go: 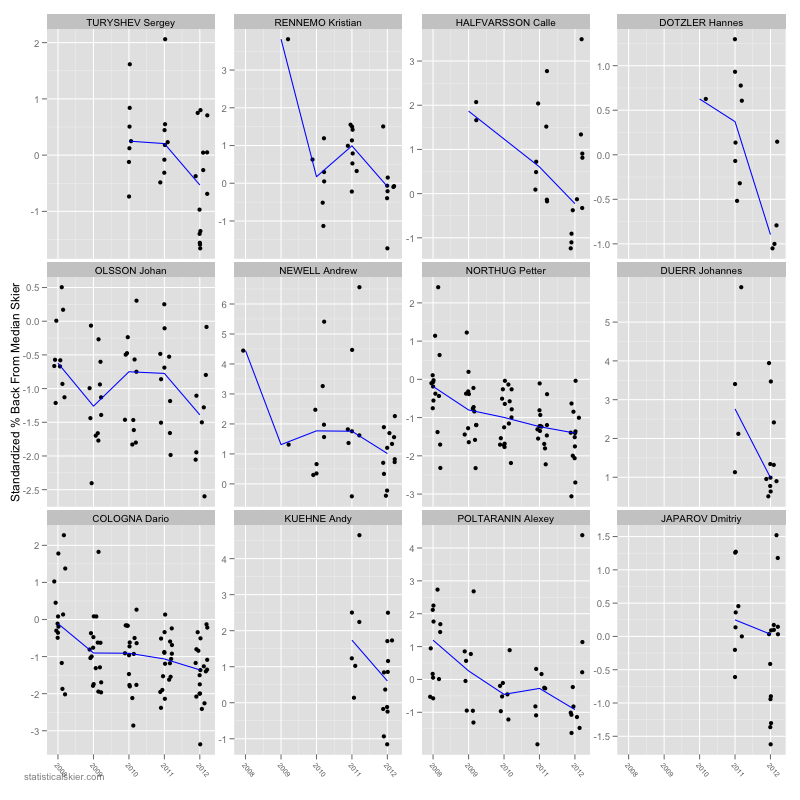 You can click through for a slightly larger version of that graph. Note that each panel has its own y-axis, in order to better see the scale change for each skier.

Calle Halfvarsson stands out as someone I noticed having an unusually good distance season. Of course, Sergey Turyshev 4 results that were head and shoulders above anything he’s done previously, so he takes the crown this year. Kristian Rennemo is a more pedestrian skier, generally speaking, but in addition to one extraordinary race (5th in the Tour de Ski pursuit) his median result also jumped considerably.

Hannes Dotzler didn’t race all that much, but went rather dramatically faster when he did. Andy Kuehne and Dmitriy Japarov are similar cases in that neither has many seasons under their belt, and had wildly variable, though much improved on average, results. Japarov in particular was sort of all over the map.

Johannes Duerr (along with Bernhard Tritscher, who’s more of a sprinter) is handily Austria’s top male distance skier his age (~25). He looks to still have a ways to go if he’s going to be a serious competitor on the World Cup level, though.

Then you have four top guys: Olsson, Northug, Cologna and Poltaranin. After two somewhat subpar years, Olsson rebounded somewhat and probably could have had a spectacular year if he’d stayed healthy. Similarly, Northug was really the only person who could have given Cologna a run for the World Cup overall, but he focused on different events, and eventually lost a good portion of the season to illness as well. But recall that in November and December he was skiing rather well.

Finally, there’s Andrew Newell, possibly an interesting inclusion in this list. Obviously, he’s more of a sprint specialist, but he did quite a few distance events this season (in part due to the Tour de Ski). While he’s not exactly a superstar in distance events, he did manage to have more strong results this season than last. Although, the overall range in his results isn’t all that different.