These are definitely less pleasant posts to write, but part of any season assessment should include what went wrong as well as what went right.

Once again, you can refer to my initial post in this series for an explanation of the general methodology.

That said, here’s the twelve men who took the biggest slide in distance events this season, compared to last: 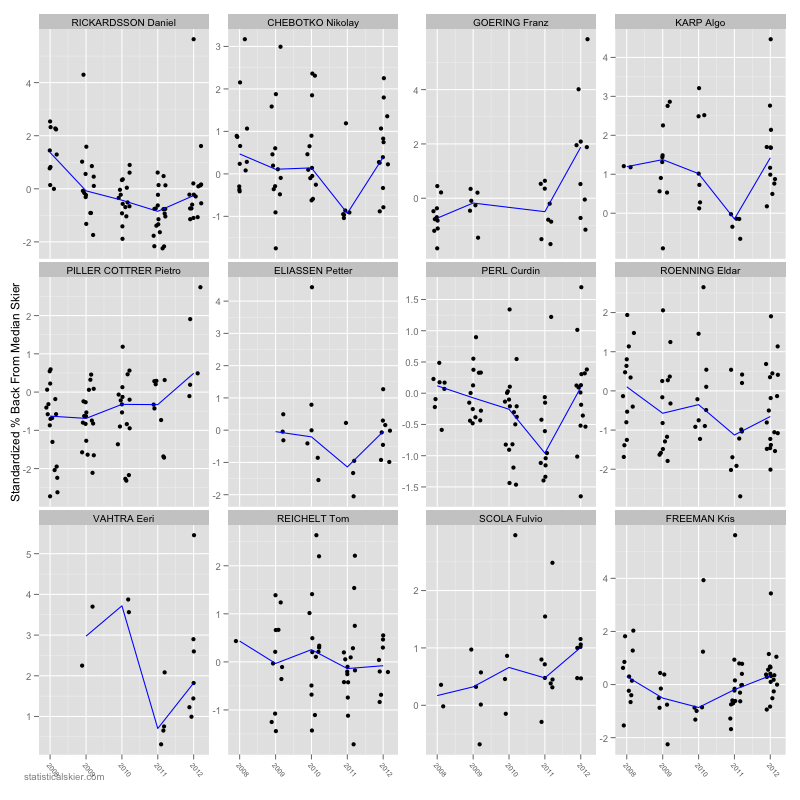 Daniel Rickardsson didn’t exactly have terrible results this year, but after several years of steady improvement 2012 just didn’t include the top level results we’d seen from him last year. You’ll note that, with two lone exceptions, he really didn’t have any truly bad races compared to his general range in the past. But he was apparently just lacking that top gear this season.

Nikolay Chebotko’s appearance on this list is something of an aberration, as it’s mostly due to an unusual set of races last season. Notice that this year’s results aren’t terribly different than what we’d seen from him in 2008-2010. Algo Karp is probably a similar case here.

In the “truly dramatic decline” category I’d probably include Curdin Perl and possibly Petter Eliassen. Perl obviously had an unusually good season last year, so some regression was probably to be expected, but he definitely fell back below where he’d been before. Eliassen is a more ambiguous case, since he has less of a racing history on the WC level.

Franz Goering also didn’t have a great season, but his was mostly a case of a lack of consistency. Four of his races were roughly on par with his past, but then his other five were all over the map.

Pietro Piller Cottrer, Fulvio Scola and Kris Freeman all strike me as somewhat similar in that I see a slow steady decline across multiple seasons. Granted, Freeman’s trend is only 2 seasons long, while the Italians have been nursing their’s for longer. But I will be particularly curious what Piller Cottrer’s future looks like. I’m not sure if he’s planning on sticking around until Sochi or not.

After Disappoining Season, Löfgren Steps Down as Norwegian Biathlon Coach