Last in the sequence of related posts covering distance events, the most un-improved women from this season: 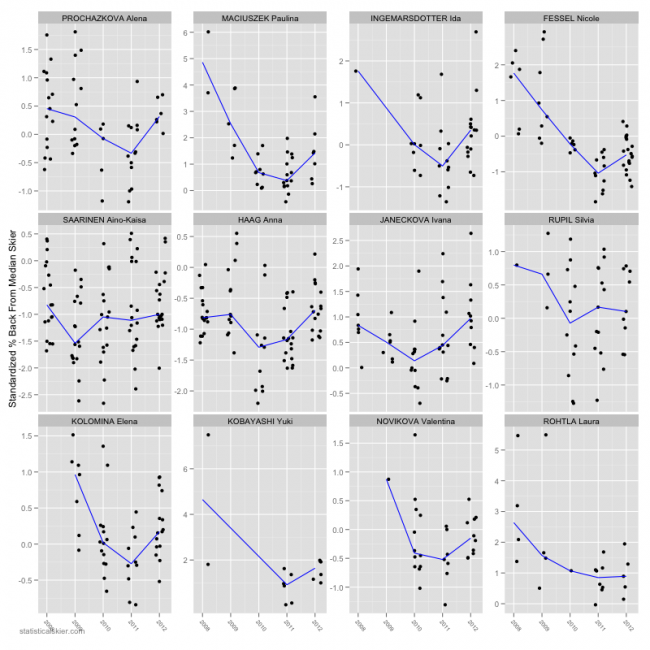 As always, you can click through for a slightly larger version.

The Slovakian Prochazkova takes the cake here with what looks like a small set of somewhat mediocre results after two fairly strong seasons. The small number of races compared to previous seasons suggests to me that she may have had injury or illness issues, but I wasn’t following her closely so I don’t know for sure.

Both Ingermarsdotter and Fessel are relatively young skiers who had seemingly breakthrough seasons last year, but seem to have come back to earth slightly this season. Finland’s veteran Saarinen, if I recall correctly, was injured early in the season, and apparently never quite got back up to speed.

Anna Haag is a sort of interesting case as she had some rather dramatically good races in 2010 (an Olympic year) but has pretty consistently slid backward in each of the following seasons. But if anything, its the 2010 campaign that seems out of place; she’s basically back to performing at the level she was pre-2010 at this point.

Silvia Rupil appears here as one of those skiers with a “decline” simply because she failed to pop the occasional outstanding race, although her “average” result has remained roughly the same.

Kolomina and Novikova are both young Russians, part of a squad that two years ago  I thought maybe was seeing signs of a resurgence, but my general impression was that they really struggled again this year.

Laura Rohtla looks like she shouldn’t be on this list at all, but remember that my ranking includes 3 other measures besides the one I’m showing here. Still, she’s probably a marginal inclusion.