Thank you NENSA and all of the past present and future GMVS skiers for making me look good! 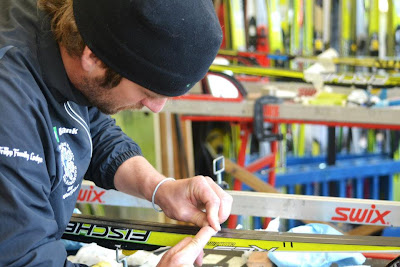 Summary:
NENSA is pleased to announce Justin Beckwith as our 2012 New England Coach of the Year!
Justin has been quietly managing the Green Mountain Valley School Nordic Program for several years now. He has coached GMVS athletes through successful junior careers and instills a love of skiing and outdoor adventure into them as well. A world class athlete himself, he knows what it takes to be a student of the sport and his program ensures that there is enough of a challenge intermixed with plenty of fun! Justin wrote via email:  “I've been really lucky to work with an impressive group of skiers over the past six years here in Waitsfield.  My goal as a coach is to make all around skiers and expose kids to adventures that create a passion for sport and competition.  Pursuing your dreams as a ski racer is an ultimate adventure and it is inspiring to help kids follow that path.  It has been awesome to watch our alums continue to ski and improve in college and beyond.

We've had five Junior National Champs and three athletes placed on the J1 Team since I've been at the Green Mountain Valley School.  We are really excited about our summer training programs with athletes like Tim Reynolds, David Sinclair, Dylan Grald and Heidi Halvorsen leading guests from throughout New England."

Justin has been coaching at GMVS for 6 years, was J1 Scando trip leader in 2009, World Junior Coach in 2012 and the New England Team Wax Tech 2009-2012. For four straight years in a row, Justin has also managed the production of 55- 65 pairs of skis per race at Junior Nationals- this is no easy feat to keep the New England train rolling! His calmness through the inevitable storms of wax testing and making the right calls, consistently put out the best skis on the best skiers day in and day out during a busy week.
Through all of this he stresses the team effort to make New England such a great ski community. In true spirit, Justin recaps his season on a recent blog post:

” Thanks for helping  make this winter a success for New England– the enthusiasm of the Nordic Community in our region overshadowed any lack of snow. It was a huge year of successes for Eastern Skiers from the BKL level,  at Junior Nationals and NCAA’s. I’m proud to be a part of this energy and I look forward to collaborating with many of you in the future.”

We congratulate Justin and wish him much success as he continues to educate and challenge his skiers to even more success in the future.