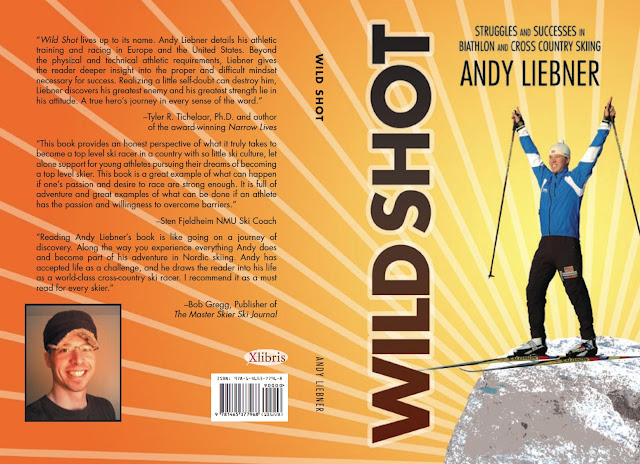 Overcome the Obstacles and Achieve Your Potential
Cross-Country skiing is more of a calling than a sport, and nowhere is that more obvious than in Andy Liebner’s skiing memoir “Wild Shot.” The book chronicles a period in Liebner’s life when he decided to throw caution to the wind and spend a couple seasons training and racing as a professional athlete in Europe and Australia. But this book is not just an athlete’s story, it is also a travel memoir and a very personal quest for self. Despite tremendous results in world class events, Liebner frequently struggles with self-doubt that threatens to overwhelm him. His ability to overcome obstacles, not the least of which are his own personal demons, is what makes “Wild Shot” a truly compelling read.
For those of us who have dabbled in sport, the attraction is clear. Where in other pursuits the result can be tainted by privilege, prejudice, or money, in a race things are simpler. The best man or woman in the event is the one that crosses the line first.
Period.
There is something pure about the knowledge that, no matter what other obstacles people put in front of you, the race will always reveal the truth.
However, in “Wild Shot,” Liebner shows how even the sanctity of the race has been compromised. Sure, once the starting gun goes off, the best competitor wins. But the race can still be rigged by not allowing some athletes to compete.
Such is the case with Andy Liebner, an aspiring Biathlete who finds he has been unceremoniously dumped by the US’s governing body of the sport (the USBA). Annoyed by the bureaucratic tape, Liebner decides to travel to Europe to train and race with the best Biathletes of the world. However, even though he is supporting his own racing and training, the USBA will not grant him permission to enter international biathlon events, even if there are no other American athletes participating.
Undaunted, Liebner finds his way into various high profile events, and as he racks up several podium finishes, he begins to achieve a stature that is beyond what the USBA can suppress.
As an avid skier myself, I was extremely frustrated by Liebner’s description of what the “system” for developing cross-country athletes is like in the US. Cross-Country skiing is a fringe sport that needs champions to increase its popularity in the US. Based on “Wild Shot,” the USBA seems to be doing the opposite.
However, Andy Liebner’s tenacious pursuit of his dream is inspiring to follow. Yes, he feels doubt along the way, sometimes even in the face of success, but it’s that tremendous human element that makes the book a rewarding read.
If you’re interested in reading something that will inspire you to achieve your fullest potential no matter what obstacles are in your way, “Wild Shot” is the book for you.