As often happens, FasterSkier gifted me with a handy topic for a few posts to kill time with over the summer by publishing a summary of USSA’s new criteria for automatic qualification for WJCs/U23s.

For WJCs, the FIS point cutoff has been lowered to 50 for both men and women (it used to be higher for women than for men) and it can come from any FIS sanctioned race between Nov 1st and Dec 31st.

Generally, I’m skeptical of the wisdom of allowing people to automatically pre-qualify based on a single race (albeit a good one). But I’ll come back to that issue in a subsequent post. For the moment, I was curious where US juniors might be able to find races with penalties under 50 during that time of year (excluding WC races, of course). So here’s a summary of all such races that fit that bill for recent seasons: 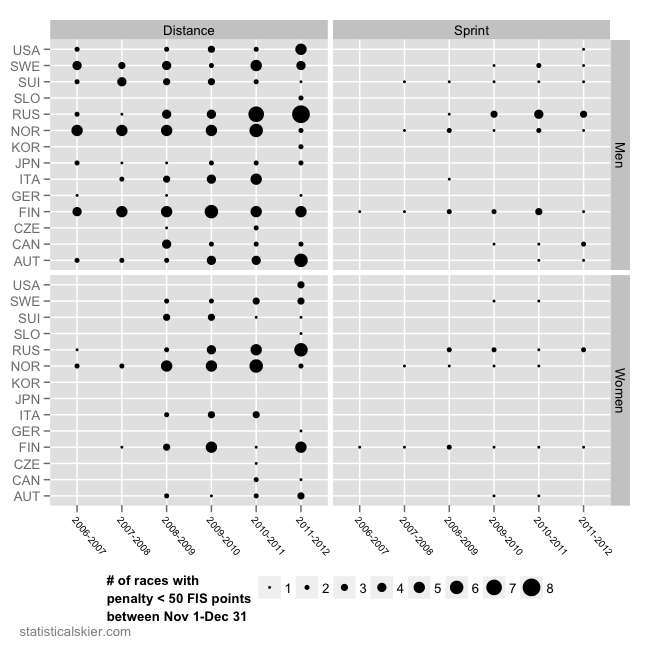 This is showing the number of FIS races in each country within those dates with a penalty less than 50. (Of course, this doesn’t reflect how many skiers in that race broke 50 points, just that someone did.) I wasn’t expecting there to be such a big disparity between the distance and sprint races, to be honest. Part of me is wondering if this rule change will favor juniors who make the effort to get over to Europe during the fall in the hopes of popping a great race. Now that I write that, it occurs to me that encouraging juniors to “go to Europe for their points” might be part of the intent here, but that’s just speculation.

Spare Rounds: USBA Staff and Coaches on the College Option