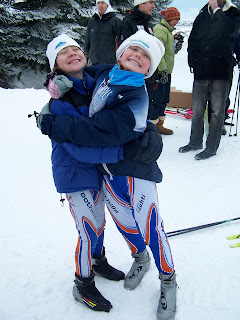 I’ll be honest, I am crazy about cross country skiing – not in an insane sort of way – but in a ‘I really love this stuff’ kind of way.  A few years ago, I had the opportunity to organize the Alberta Youth Champs in Calgary (2009) – no club had picked this event up in previous 3 years.  I didnt really know what I wanted it to be, i just wanted to make sure that it happened.  It worked out OK – I learned that hosting an event in Alberta in January can result in cold weather cancellations.
Where I really got a sense of the potential of an event like Alberta Youth Champs was when I attended the 2010 Quebec Noram Midget Champs.  Organizer Tom Silletta and his crew from Joliette really have it nailed down.  An incredible mix of kids stayiing in an ‘athletes village’, representing their ski clubs, skiing in a few races, in what was for me the biggest and best organized provincial level kids cross country ski event I had ever been to.  What Tom and company have created is not just 2 or 3 races, but an event that has created its own set of traditions, its own exciting anticipation built collectively by skis clubs primarily from Quebec, but also from Ontario, New Brunswick, and New England.  It almost feels like a mini-nationals, where kids and clubs gear up for this event, circling it on their event calendar the year before, where people are willing to sleep on school classroom floors and shower in high school showers to be a part of what is truly the most important event on the calendar for clubs from this region.
I’ve been lucky to be a part of this event twice.  I’ll tell you, Tom Silletta, was beaming when our club from Canmore won the club aggregate banner in 2010 – because I think for him it was a dream to have kids from the west joining in on this event and winning.  For our kids from Canmore, they were fired up about racing, about being in the east – I think for some it was a turning point where they said to themselves, I want to get faster and for all of those kids, they have.
When we returned to Joliette in 2012, our club kids from Canmore once again skied excellently, winning aggregate banners for the midget boys and girls – almost every skier finishing in the top 10 of single year age categories of 60-80 kids.  I was incredibly proud of them, but in the back of my mind, i realized these kids were fired up about this event and the magic that Tom and his crew from Club Defi St Therese Martin ski club and the whole of the Quebec ski community had created.  This event is bigger than a ski race – its a place where kids dream.
One of the magical moments at the event in 2012 was when Alex Harvey spoke in a short video clip and talked about how the Quebec Noram midget champs were a pivotal experience for him in his career as a ski racer – that it was a jumping off point.  You could have heard a pin drop in the room when Alex was speaking – this guy is a rock star in Quebec (and in Canmore I think).  Having been a part of the Joliette event a couple of times, I can see why so many young Quebec skiers are dominating our national level events curently – Raphael Couterier, Alexis Turgeon, Anne Marie Comeau, Emilie Stewart Jones all participated in the Noram Midget champs.  Athough it would be difficult to establish a cause effect relationship between participation in Quebec Noram Midget Champs and the rising level of Quebec junior racers at Canadian Nationals, I would say there is a strong correlation.  Kids and clubs in Quebec are fired up about racing and i think because of events like Quebec Noram Youth Champs dream of how far they can go.  At Quebec Norams its not just one club that dominates, but clubs from across the province.  They are doing some things really well in Quebec – starting with the Quebec Noram Midget Champs.
And so, setting out last year to create the 2012 Alberta Youth Champs, I set out to not replicate the event that happens in Quebec, but to try to create an event that fits for Alberta, that creates a culture that includes the same excitement, anticipation, and fun for our kids here in Alberta, because this is where we are.  We set out to create something that reflects the priorities of our ski community, that fits for here.  We have great clubs in this province, and every where i know of, people are working hard to build something extraordinary, something where kids get hooked on a great sport – cross country skiing.  My goal is to help make that a bit easier by creating an event that brings clubs together once a year, where every kid (born in the four year age group targeted by this event) in Alberta who wants to attend, can attend – no qualifications, just interested in participating – then after having participated having kids say ‘that was awesome – i want to come back’.

I have had some questions about whether children younger than the four year age group can attend (1999-2002) – I have responded with a ‘no’ – I think it OK for kids to wait, to develop that sense of anticipation of ‘I cant wait till I am old enough to participate in the Alberta Youth Champs.

In 2012, I was amazed by XC Bragg Creek ski club – here is a club that was formed in 2009 – has never had a child who attended a regional or provincial level race before.  Yet here they were, stepping up to host a provincial event.  I now live in Canmore, but I had lived in Bragg Creek for 15 years and skied on the trails at West Bragg a million times with my own family, and I had always said to myself – this would be a great venue for a childrens event – trails that are challenging, hold snow well, have great grooming (recently) and a bunch of summer camps that could be used for hosting children at an event.  they did an incredible job and hopefully provided a good example of how a small club can go about doing something big.

I wanted to let you know that we are two months months out from the early registration deadline (Dec 15, 2012) for the 2013 Alberta Youth Champs in Bragg Creek. Registration at https://zone4.ca/onlinereg.asp?id=5043 We invite you to join us at what will be a fun and eventful weekend. Our goal with this event is to create something that is perceived as a ‘big event’ for midget and minimidget age kids (1999-2002) – the sort of event that when kids get to the end of it they say “I cant wait for next year”, that kids who are not old enough to attend say to their families “I cant wait until i am old enough to attend the Alberta Youth Champs”. We think this kind of magic is exactly the type of event that will hook kids on skiing and racing.
For those of us that were lucky to be there last year, my sense is that we got a good start on this mission – to hook kids on skiing and racing. I have attached the race notice for the event here and for those of you who attended last year, you’ll recognize some familiar parts – based on some feedback from club coaches, we have altered the distances for the minimidgets in one of the races (ind skate race) – only the midgets will do the stairway to heaven climb in the skate race, the minimidgets will get a chance to challenge themselves on that climb during the wave start classic race on sunday. As event organizers we’ve heard the feedback and are making a change.
New this year we will be using Venturer Lodge at Kamp Kiwanis, a newer multipurpose building that sleeps about 60 in addition to all of the spaces we had last year – this will bring our capacity to about 200 people (including coaches and chaperones) for the 2013 event (this is why our costing is a bit higher this year).
A question that has come up often is how many coaches and chaperones need to attend. the answer is about 1 adult for every 8-10 kids.
The Alberta Youth Champs was a huge event for this age of skier in 2012 – and we would love to see some skiers from your club attending. the host clubs for this event – XC Bragg Creek and Canmore Nordic – are excited about collaborating on thsi year’s AYC. Thank you for selling this event in your club and community – you folks did such an incredible job of promoting this event last year that we had a much larger than expected turnout of kids.
It will be winter in no time – i look forward to seeing you at events over the winter!
cheers

What Skiing Can Take Away from Armstrong Saga