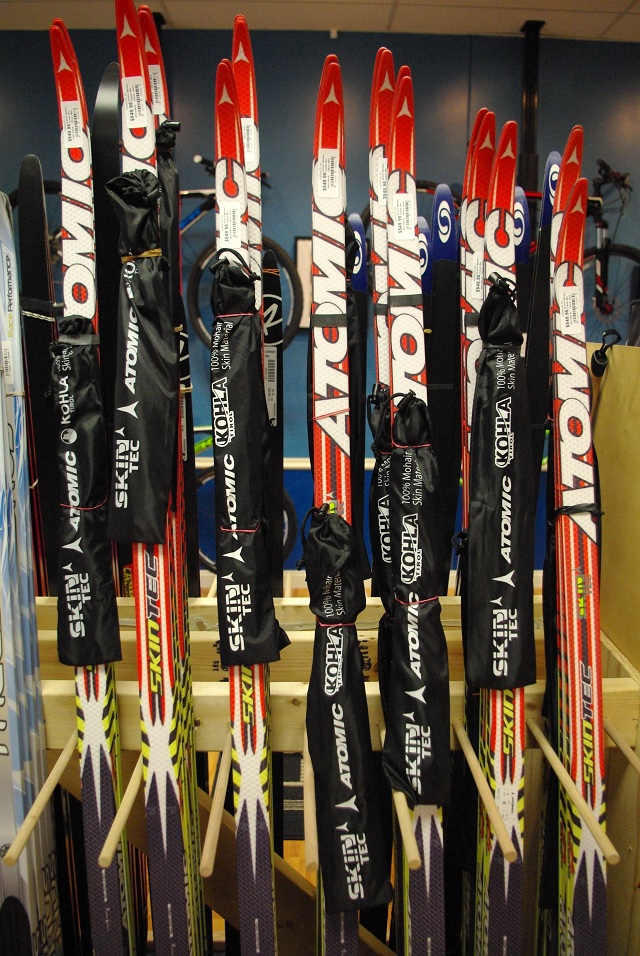 At CyclovaXC we are super excited about the new Atomic Skintec ski. The Atomic Skintec is a performance, waxless classical ski with a removable base plate that allows you to quickly and easily switch out your kick zone as follows: 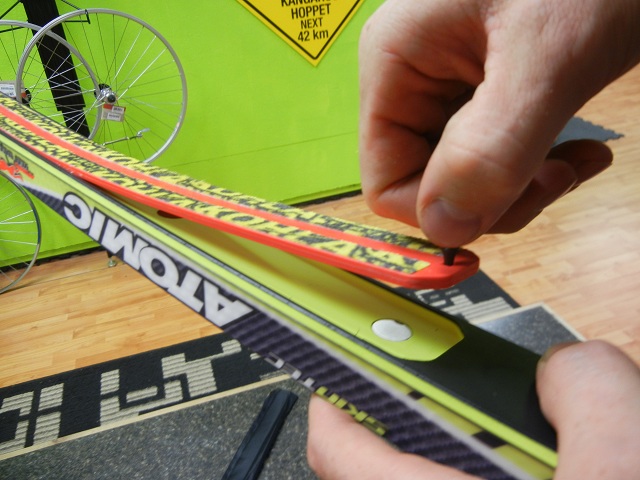 The end result is a performance, race classical ski that you don’t have to bother waxing for kick.
Until now, there has been some confusion as to how to actually fit these skis, so Frank and I spent last Saturday testing them out.  It took us half a day, but we eventually found a quick and easy tactic for getting a feel for these skis and ensuring a proper fit.
Generally, fitting a customer to a pair of skis involves sliding a card backward and forward beneath the ski to see where the pressure distribution points are. However, the traditional method is ineffective with the skintec base because the skin engages and grabs the card. The result is that sliding the card back and forth beneath the kick pocket gives a result that doesn’t feel like any other pair of skis you’ve ever tested.
The trick is that the skin only engages when you’re sliding the card from the tail of the ski towards the tip. It makes sense when you think about it, there is no resistance when you’re going with the grain (as you would gliding), but this resistance appears if you start going against it (as you would when kicking).
It’s similar to thinking about petting a porcupine. If you run your hand from the head to the tail you’re fine, but if you go tail to head you’re going to withdraw a hand punctured with quills.
So what’s the simple trick for fitting these skis?
Only run the card one way, from tip to tail.  Going that way gives you a feel which is consistent with every other pair of skis you’ve ever tested. The second you try to reverse direction, however, the skin grabs and you get a confusing result.
By running the card from tip to tail, you can see exactly where the pocket begins and ends and how it reacts when the skiers weight shifts. It’s a little more time consuming than conventional fitting, but the good news is you don’t have to mark the Skintec skis kick pockets.
We found that the pairs we had in our shop had a fairly consistent feel with the minor variations that are typical of all skis.  All in all, we’re stoked to get out on this new technology this winter! I expect we’re going to sell a TON of these skis, so now would be a good time to come to the shop and get yours if you’re interested (also…it snowed today!!!).