All things aligned: a gauzy low fog burned off into bluebird skies and the snow skied crisp along a 42-kilometer gem during the Methow Valley’s inaugural Ski to the Sun Marathon and Relay. Last year, we ran a piece exploring how the Ski to the Sun Marathon organizers were rebooting their marquee ski race. The valley’s signature race had for years been a two-day pursuit. An attractive format to many, but it eventually stagnated with a core cadre of skiers roughly one-hundred strong participating.

A rethink was in order to highlight one of North America’s premier ski destinations. Creating a must race event is not as simple as build it and they will come. Many pieces must fall into place, let alone the weather and snow conditions on a race date often selected more than a year out.

In our previous article, Kent Murdoch, who has been making the trip from Seattle to the Methow for eons, told FasterSkier that a signature event was not on the minds of the pursuit race organizers. But over time, as the valley’s considerable volunteer energy became evident, creating an event that was a regional draw for cross-country skiers became a goal.

The Methow appears to have found a formula that works.

“We went from wanting something bigger than the previous existing pursuit, and I think that we had four times the number of people,” said Pete Leonard, Executive Director of the Methow Valley Nordic Ski Education Foundation, during a conversation this January.

The Ski to the Sun Marathon, which runs this year on February 8th,  spans the valley from the north in Mazama south towards Winthrop. Before skirting across farm and ranch-land into Winthrop proper, the course takes a lovely – and heart-rate-rising- 12 k stair step climb from the valley floor to the finish at Sun Mountain Lodge. Here’s the thing: you can imagine it’s your own Tour de Ski final stage grind with it’s Alpe finish, or register with a relay team and save the ascent for a teammate. 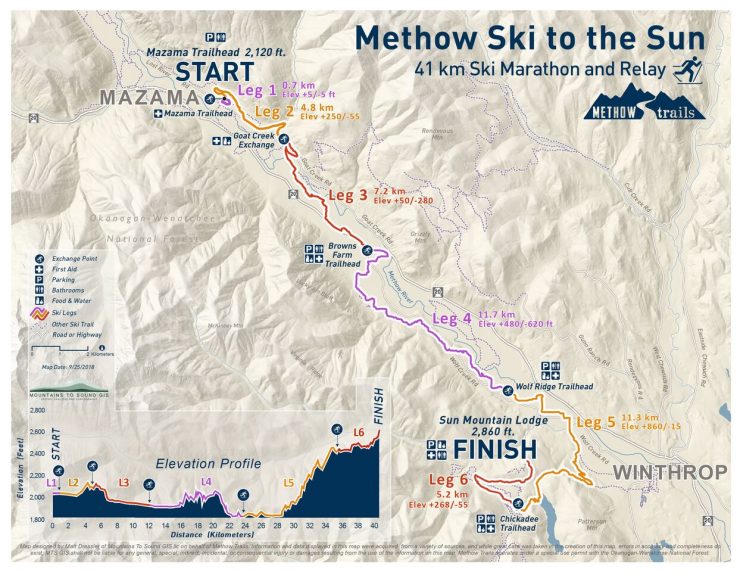 There’s something for hardened master racers and those simply seeking a cool social scene bundled into a ski race.

This year, organizers are bringing Olympic champion Kikkan Randall to the race where she will also be available for a meet and greet. Randall is also expected to compete.

What follows is an interview with two of the race organizers, Kent Murdoch and Pete Leonard. We explored what they had learned after year one of the Ski to Sun Marathon and Relay. We thought it might be useful to other communities thinking about developing a premier ski race to learn from those in the Methow as they forge ahead with creating a signature event on the race calendar.

FasterSkier: A race like this is an investment in the community, but it also takes considerable resources — both human capital and money. Can you talk about the finances?

Pete Leonard: Everybody grouped together to deal with some of the unknowns and for our race committee that was a little bit stressful leading up to the race. But everything seemed to come off and everything seemed to work out. But one item was noteworthy, we were able to balance the budget the first edition – which was no small feat.

Kent Murdoch: I would also add that we weren’t planning to actually be in the positive in the end. We were expecting to take a little hit, being the first year. But, it was surprising. Honestly, you also have to take into account that there is a ton of community volunteer work that goes into it. And I think the volunteers in the valley really pulled out the stops.

FasterSkier: You spoke about some unknowns. What were some of the unknowns besides weather and snow coverage. What did you stress about?

Pete Leonard: The logistics of a relay — those are the things we didn’t necessarily think about. With a relay happening simultaneously with a marathon, or starting 10 to 15 minutes behind, lots can go wrong. We have all these people driving down valley and using different zones to tag their partners. That took some coordination. It’s also a trail system and race course through some private land holdings. We have road crossings that can complicate race course set up. We also cross driveways and someone simply might not have their driveway plowed. Those are little things, but we were worried about them.

Another issue we learned about was limited parking at the finish. There was a big conference last year up at Sun Mountain Lodge the same weekend as the race. That was a little bit of a worry. We also stressed about accommodating all those people for dinner. And then there was the cooking and food for 300 people. Just constantly thinking how it was all going to come together.

I think sometimes that is a little bit of race organization, making sure you are pushing to do your absolute best by the racers so you give them the best product.

FasterSkier: Can you talk about the somewhat unexpected bump from 100 skiers in the old pursuit race, to a start list with nearly 400 skiers including relay participants?

Kent Murdoch: In our first year of the Ski to the Sun it took us a bit by surprise because so many people entered kind of last minute. I think that is typical for many events, but it made it more of a challenge to plan for the banquet meals. I’m not sure exactly what that is about, but I think people want to make sure they are healthy and their is going to be snow. And so it does make it hard to plan for.

For this year, we modified our fee schedule to moderate that a bit. I do not know what to expect. We did something like December 1st and January 1st fee bumps — meaning the entry fees increased on those dates.

Pete Leonard: We also have February 1st as the closing date for the relay. And then there is a very substantial fee bump if you want to wait to the last week for the marathon. We are just really trying to encourage people to make the commitment to race because that helps us deliver a better product and make sure all the pieces are there.

FasterSkier: Skiing has yet to really find the equivalent to the gravel scene in biking. How are you trying to draw more people into skiing with this event?

Kent Murdoch: The relay aspect is the biggest change we have made with regard to events we have held. And it’s an attempt to broaden the appeal of a ski race likes this. We are getting both this year and last year about a 50-50 split of those entering the marathon versus the relay. So the thing about the relay is it really opens it up to anybody, we have one leg that is less than a kilometer on flat terrain. And then we have every kind of leg that you would want. There are many relay combinations that can suit any team, and an individual can do more than one leg. That flexibility seems to have been successful so far.

To every racer those fronts matter a little but differently. For some they are tuned into one part of the event, but it still matters to them that the course is well groomed even if they are out there and they are motivated by the social part of it or the epic adventure type of thing.

I think to reach out to a broader segment, it starts with making it obtainable, which is what Kent talked about with the relay there. We had a lot of people who did the relay last year and were like ‘oh man I am going to do the marathon next year,’ because they thought that was not as hard as it was going to be.

I think one of the big challenges with cross-country skiing is reaching out to new segments of people who might know the sport and be attracted to it, but they are not going to be stoked to sign up and line up next to the Lycra clad master racers of the world because they feel they are not ready for that — but they are fit. They could be an ultra-runner, or a biker, or a rower or something like that and they are going to want to come over to the Methow. This is their experiment with cross-country racing. This is one important aspect as we build it — that we are not just speaking to the people who are already part of your tribe.

But trying to build your ski racing tribe up to with these other people and bring them into the fold.