This article has been updated with additional information about the Birkie, about all races in Vermont, and about the current state of emergency orders in Anchorage.

FasterSkier has previously reported on the significance of FIS points, points earned in races sanctioned by the International Ski Federation that can be used to compare skiers to one another even when they did not engage in head-to-head competition. Under normal circumstances, an athlete’s FIS points are used for things like selection to the following season’s national team, while team selection for international competition is generally based more on an athlete’s performance in head-to-head racing in the current season.

In this year, with all national-level races having been cancelled, FIS points are poised to take on additional significance, as U.S. Ski & Snowboard leadership will necessarily be relying more on discretion to choose teams for international competitions such as 2021 World Championships, in Oberstdorf, and 2021 Junior World Championships, in Lahti.

As U.S. Ski Team Cross Country Program Director Chris Grover told FasterSkier this fall, when it comes to comparing American performance in domestic competitions held in different parts of the country, “We know the athletes so we can easily gauge the quality of the field. If the race is a FIS race or an NRL race, we also have points to use in determining field quality. Then we simply look for stand-out performances.” Regarding comparisons between Americans racing in Europe and Americans racing domestically, the calculus was similar: “As in the case of domestic racing, it’s easy to judge the quality of the race by seeing which athletes are in the race and what the FIS points look like.”

So, FIS points are going to be exceptionally important for American athletes this winter.

So where are the FIS races going to be held? The short version of this article is just a link to this page on the FIS website. Here are the American FIS races for the 2020/21 season. Click around and take a look at it. The end.

But, like many things in life these days, these plans are subject to change. Due to the pandemic and public health considerations, to be sure, but also due to the catch-22 of fluoro use and FIS sanctioning. Accordingly, the rest of this article provides an annotated list of this winter’s American FIS races, organized by geographic region, with an attempt to include the most current information regarding race status. If, four months from now, public health considerations made it impossible to have a single FIS race in this country this winter (and there are already asterisks or outright cancellations around more than half of them), at least this article can serve as a historical artifact from a more optimistic time.

(As a brief aside, it is worth noting that athletes who are unable or unwilling to race this winter will not see their FIS points suffer, if they buy a FIS membership for this season. As USSS representative Adam St. Pierre wrote in an email to USSS members in October, “Each FIS and [national ranking list] Points list released in the 2020/2021 season will include all races since May of 2019. Your points can not get worse this season, but they can improve if you are able to race and achieve better results than you did in 2019/20. You must have an active FIS license for the 2020/2021 season in order to maintain your FIS points for the 2021/2022 season.” So if you’re sitting out this season of competition but intend to race next year, it may well be worth shelling out for a FIS license simply to preserve your standing.) 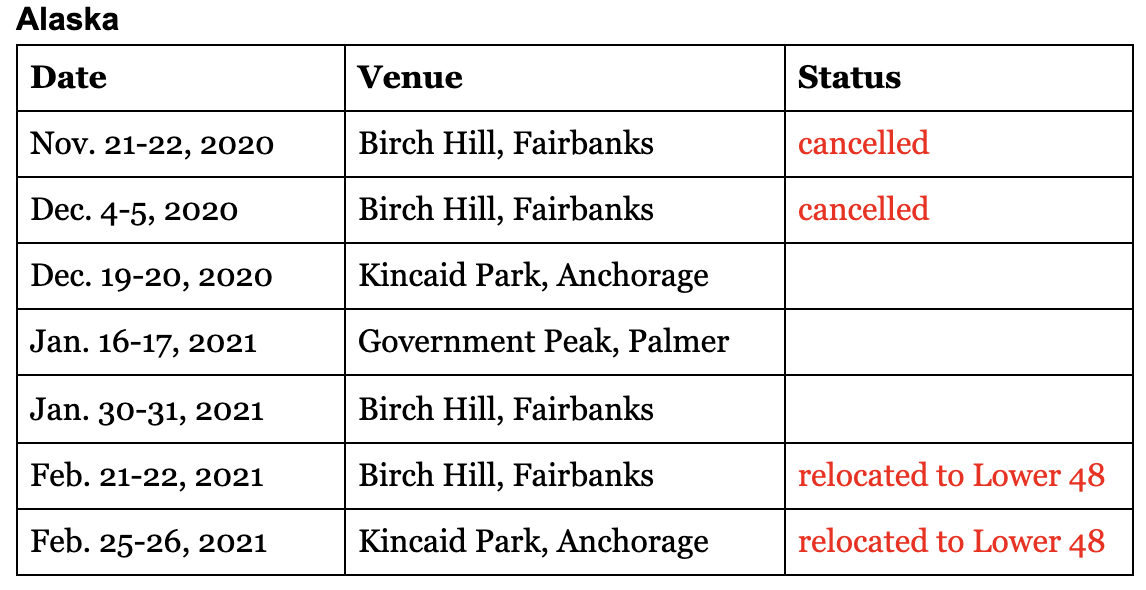 The opening weekends of racing in Fairbanks were cancelled by race organizers on Saturday, “in light of the current high rate of COVID-19 infections around the state, as well as local and statewide hospital/ICU bed capacity, and given Governor Dunleavy’s extension of the public health emergency through December 16,” according to a statement from the Nordic Ski Club of Fairbanks. In a more detailed follow-up statement posted Sunday, the ski club explained that it is moving all of its scheduled races to virtual events through the end of this calendar year. The advisory group that helped the ski club reach this decision included three physicians alongside the ski club’s race crew.

“We are disappointed to not be able to compete, though considering where Alaska is with COVID, it is a responsible decision and we support Fairbanks in their decision,” APU head coach Erik Flora told the Anchorage Daily News on Saturday.

“As coronavirus cases continue to skyrocket in the state, cracks are appearing in Alaska’s fragile health care system,” Alaska Public Media reported on Friday. Providence Alaska Medical Center in Anchorage, the state’s largest hospital, recently requested at least one mobile morgue, the Anchorage Press reported the same day. As of Saturday afternoon, two out of three civilian hospitals in Anchorage were sufficiently full that they were not accepting incoming ambulances.

The state’s next scheduled FIS race weekend, the December Besh Cups in Anchorage, does not seem to be barred by either the current Emergency Order governing the Municipality of Anchorage or its attachment covering organized sports specifically. However, the attachment explicitly bars spectators from attending sporting events, and states that “events that include participants from outside the Municipality [of Anchorage] should be postponed.” Anchorage Besh Cup races typically include multiple participants from Fairbanks and the Mat-Su Valley.

The state’s final two scheduled FIS race series, RMISA competitions in Fairbanks and Anchorage, will not be held in Alaska, but rather will be relocated to the Lower 48.

As of Sunday, Alaska as a whole ranked 14th in the country for daily reported Covid-19 cases per capita for the state overall, with 77 per 100,000 residents. A USSS document setting forth official guidance for domestic competitions advises event organizers to assess current case levels within the community, and defines “high community spread” as more than 25 new reported cases per day per 100,000. “In the event of high community spread,” USSS advises, “it is recommended you speak with your local health authority regarding ICU bed utilization and ventilator availability in the location’s level 1 medical center catchment.” Under this standard, every single venue discussed in this article is currently experiencing “high community spread,” save for those venues in Vermont.

As FasterSkier reported earlier this month, although some standard programming at the Yellowstone Ski Festival will continue, the biathlon race and FIS nordic race have been cancelled. As a representative of the ski festival told FasterSkier, “We took all of the factors in, gathered all our info, and based on the increase in [COVID] cases and what the county was recommending. With what is going on, we just felt the right thing to do for the community, and for the safety of everyone was to cancel the races.”

In response, Michigan Tech representatives emailed FasterSkier earlier this month that they would remove the FIS status from their races in order to remain fluoro-free. “By removing FIS sanctioning from this event, this allows us to place a fluoro ban for this race event, and all race events we are hosting for the 2020-21 season,” wrote Michigan Tech head coach Thomas Smith. “As US Ski & Snowboard has banned the use of fluorinated waxes from all USSS sanctioned events for the 2020-21 season, we will still maintain USSS sanctioning for this January 2-3 event with a fluorinated wax ban.”

Moving to Wisconsin in late February, the race still listed on the FIS site as “50 km F Mst” likely needs no introduction; this particular 50-kilometer mass-start freestyle race is, historically, the American Birkebeiner, a point-to-point race from Cable to Hayward. But this year’s Birkie has already undergone substantial change, and currently takes the form of a five-day event over a 46-kilometer loop course, “with limited and staged start waves each morning” for five days in a row.

Birkie representatives stated by email that this year’s race will not be a FIS race: “We are not FIS sanctioned for the 2021 American Birkebeiner, but we are sanctioned by US Ski and Snowboard.” Regarding the status of a fluoro ban at a USSS-sanctioned Birkie, race organizers wrote, “the 2021 Birkie Events will be fluoro-free.  We are working on determining how testing will be implemented and right now, our goal is to do testing on a limited number of skiers.” 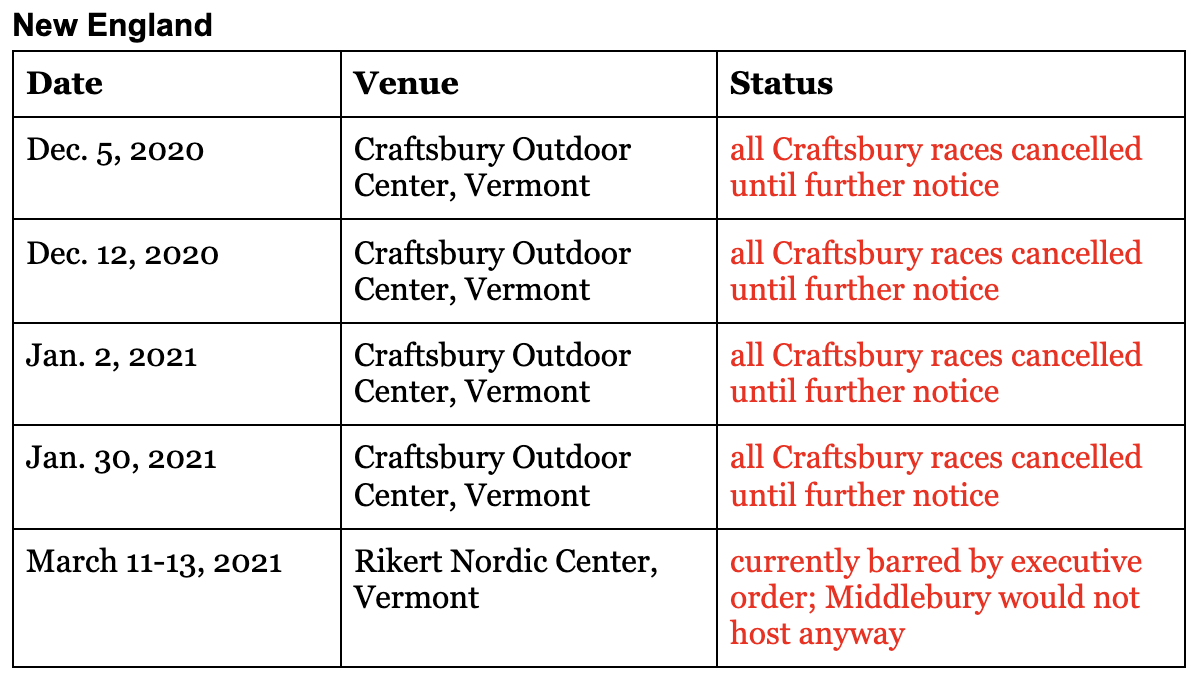 In a November 13 announcement, the Craftsbury Outdoor Center stated that all ski races on its grounds are currently cancelled: “2. Races are on hold: similarly, all ski races at the Outdoor Center are canceled until further notice.” This update came in response to a new addendum to an executive order from the state’s governor. The order, which went into effect on November 14 and continues through December 15, at which point it will be reassessed, provides that multiple-household gatherings are suspended, and that all recreational sports programs are suspended, save for school-sponsored sports activities.

If these provisions remain in place in March 2021, the NCAA Championships would not be able to occur, as it is by definition a multiple-household gathering. Moreover, there is currently a quarantine requirement for visitors coming to Vermont from beyond its borders. Finally, Middlebury (the theoretical host) announced last month that it “will not hold any athletic competitions during the winter season.” So even if NCAA Championships happen, in any form, it seems unlikely that this will be within the state of Vermont.

(While the possibility of these championships occurring at all is outside the scope of this article, the fact that both the Ivy League and NESCAC (New England Small College Athletic Conference) have cancelled winter sports – that’s the ski teams at Dartmouth, Harvard, Bates, Bowdoin, Colby, and Middlebury, among others – poses additional challenges to the possibility of nationwide collegiate skiing competition.)

5 Things to Do After the Slopes Close