Val Müstair, Switzerland and its snowfall were again the idyllic backdrops for the Tour de Ski (TdS) where the men raced a 15-kilometer classic mass start to kick off the distance stages. After yesterday’s skate sprint in which Russia’s Alexander Bolshunov took second place, it appeared the twenty-four-year-old would iron-fist this fifteenth edition of the TdS.

No doubt, Bolshunov came into the event as the favorite. The conversation trending towards how much time he wins the overall. As last year’s winner of the TdS, and finishing on five podiums in seven stages, this Russia has been here before.

Immediately as the 77 starters crowding the start tracks set off, Bolshunov was the skier to watch. No matter who strode alongside him for the first 5 k or so, this was simply a game of when Bolshunov would shatter the pack and make an exclamation point statement that his trend towards generational status skier was for real.

The TdS includes a points race, which incentivizes some skiers not contending for the overall to remain upfront to snag the prime, and perhaps collect a few more Swiss Francs at the end of the workday. With the points bonus offered at 4.5 k, Italy’s Federico Pellegrino, winner of Friday’s sprint, was right there in the front.

With four laps of a 3.3 k course which featured a long climb and sinuous downhills with techy turns, this was primarily a fitness test in the end. And the Russian team collectively appears the fittest. Along with Bolshunov, his teammates including Alexey Chervotkin, Evgeny Belov, Ivan Yakimushkin, Denis Spitsov, and Illia Semikov were a wall of red Lycra upfront.

No matter how you parse the stats or the visuals presented of the race, it certainly looked like a Russian podium sweep with the only lock Bolshunov on the top-step. At 11.4 k, Bolshunov powered ahead by 5.1 seconds ahead of hometown hero Dario Cologna with Belov, Maurice Manificat of France, Yakimushkin, Sptisov, Semikov, and Sweden’s Oskar Svensson towed through in that order. Svensson was 14.7 seconds off the pace.

The solo Bolshunov show flew ahead. Eight-tenths of a kilometer later, he secured a 19.7-second cushion. With little action out front beyond anticipating how much time Bolshunov might gain, we’ll send it straight to the finish: Bolshunov won by 23.5 seconds.

As noted, it appeared late in the race to be a probable all-Russian podium. Yet the cosmos can play tricks. The podium, in a parallel universe, maybe had a decidedly red look.

Coming into the final downhill, made more complex by a sweeping right-hand corner which had already taken out several skiers in yesterday’s sprint and today’s mass start, Belov dove into the bend first, a hair ahead of Chervotkin. As skiers warped around, Chervotkin tried to cut inside of Belov and clipped his skis. Belov tumbled as did Chervotkin right after. As the two skiers exchanged words and began righting themselves, Yakimushkin went wide left off course and out of the turn to avoid crashing. Twenty meters later, he skied back on course.

In the meantime, Cologna, remained on his feet, skirted around the tumbled Russians, and made good for his hometown and the army of Cologna supporters who no doubt were clanging oversize cowbells at home as the event did not allow spectators. As the Swiss gift that keeps on giving, Cologna placed second (+23.5) and Yakimushkin third (+25.3). France’s Manificat bypassed the carnage as he was many meters behind the crash, and placed fourth (+27.7).

Cologna has won the TdS on four occasions – a record for men’s overall titles. His second place on the stage was his best result of the season. Before Saturday, his best 2020-2021 distance result was 14th place in the Davos 15 k skate. His last podium was in the 2019 15 k skate also in Davos.

Russia locked up five of the top-10 spots, with Belov, who had crashed, missing out on a podium and placing eighth.

Notably missing from the results was Chervotkin. He was disqualified after the race for violating rule ICR 343.9 which states, “Obstruction: deliberately impeding, blocking (by not following best line), charging or pushing any competitor with any part of the body or ski equipment.”

For the U.S., Gus Schumacher was the top finisher in 36th (+1:53.8). New to full-time World Cup skiing, Schumacher has been on the road since mid-November as he begins to learn more about certain World Cup venues, the vagaries of life on the road, and the speed at which skiers like Bolshunov hammer about.

Today, the twenty-year-old from Anchorage, Alaska was 23rd (+8.2) at the 4.5 k mark skiing in a thick soup of skiers: 30th place was 10.8 seconds back. As the race broke apart due to the surges ahead at 11 k, Schumacher fell back to 33rd amidst a group of skiers including Sweden’s Calle Halfvarsson.

“It was fun to race a mass start again,” Schumacher emailed. “I thought it would go out fast and then cruise but it went out quite slowly, which was a little frustrating in the belly of the pack. The second lap also seemed pretty relaxed, and as the pace quickened through halfway I was feeling like I was skiing well and moving up. And then near the top of the climb, the wheels fell off and I just flooded hard. Thankfully there was a big downhill to recover, but I really lost my momentum. So not perfect pacing, but it was fun to ski closer to the front for a little while.”

As his first Tour de Ski, the prospect of an eight-stage slog can be daunting. Decidedly, Schumacher is taking each stage one by one, each a unique opportunity to learn and grow.

“I definitely approached the day as a singular race, just with the goal of doing as well as I could,” Schumacher wrote. “The risk that I could’ve taken would be double poling on skate skis, but I figured that would not be a good move with the idea of an 8-race tour.”
He added that the race was a reminder to strategically pace at altitude.

“Across the board, it was a disappointing day for the guys, just call it what was,” said U.S. Head Coach Matt Whitcomb after the race. “Gus probably showed the most signs of promise today, he skied within the top-20 for the parts of the race and top-25 before he was kind of running out of gas. He was pretty cached on the fourth lap. We will just make sure he continues to fuel well it is one of those places where if you go a little too hard on any one lap which is my guess as to what happened, you end up having a pretty heavy tax late in the race. It comes back to bite you and sometimes you get away with it. I am not one who likes to see people ski a conservative race I like to see people aiming for the bull’s eye and he did that and that is how to get faster.” 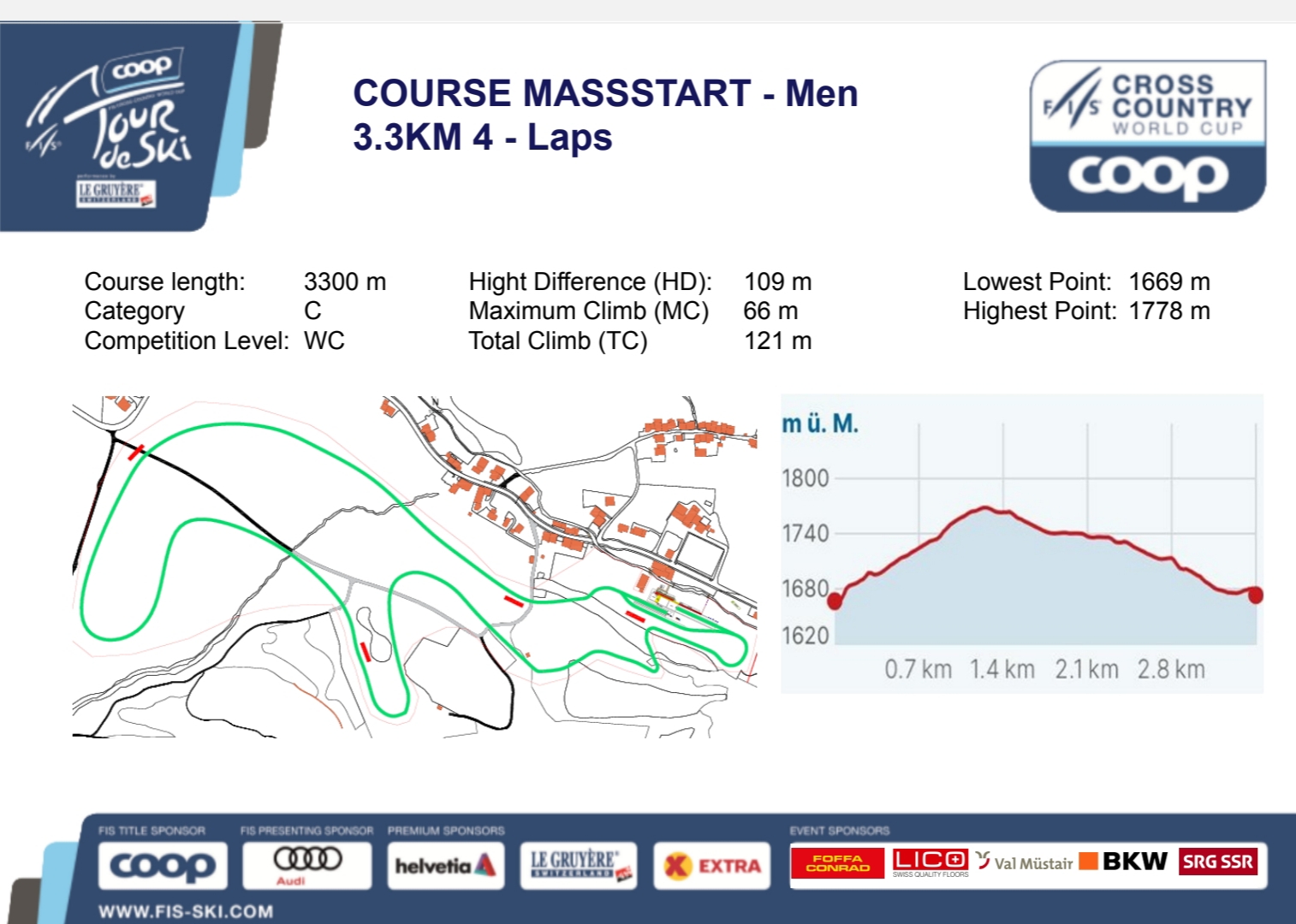