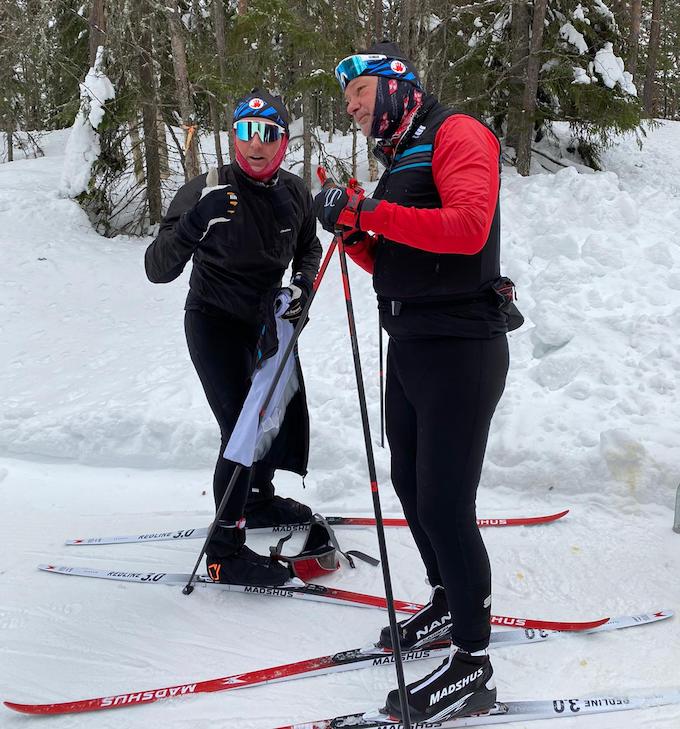 The corona virus forced Vasaloppet to organize this year´s events differently. One of the changes was keeping the Vasaloppet track groomed and open for 23 consecutive days in order to spread out the participants and avoid crowning.

“With the corona situation being what it is, and the Vasaloppet arena open for such a long period, this was a unique opportunity to do something nobody has done before,” Skog says.

Madshus caught up with Skog at the end of the eighth day.

How does it feel to ski 90 kilometers a day, ten days in a row?
“It doesn’t feel good at all, but we’re able to do it. Once you settle into a routine it actually gets easier,” says the 65-year-old former Swedish cross-country national ski team coach.

For Skog and Möller, 46, the routine was getting up and having breakfast at 4:45am. Then they made their way to the start in Sälen and spent the next eight to ten hours on the course to the finish line in Mora. Shower, change, eat and massage, set out clothes and supplies for the next day, then hit the sack and repeat the next day.

“Consistency is the key. We finished the course in about the same amount of time every day, about seven hours, give or take half an hour, says Skog, explaining that holding back is the hardest part.

“You have to keep the intensity low. If you go after this like a race, you won’t make it ten days in a row. You will grind yourself into a pulp in no time,” says the seasoned ski coach, who holds a university degree in overtraining.

Why did you want to do this?
“The purpose of the exercise is to raise money for the Viggo Foundation, established by Måns Möller. The Viggo Foundation puts on camps and activities for kids with various neurodevelopmental disorders and challenges such as autism, Asperger’s and ADHD, and provides funding and support for clubs, teams and associations that include these kids in their programs.”

What were some of the highlights of the stunt?
“Our skis were amazing. Thanks to Håkan Norrbäck at Madshus and Swedish national team wax coach Urban Nilsson, we had the best skis of anyone on the course in all conditions,” Skogs says with a huge grin, pointing out that they encountered every perceivable kind of conditions from Arctic to nearly tropical.

“In the beginning it was really cold. On the first day, the temperature was -26 C. The second day we had -24 C. When we got up to -18 C, it felt pretty comfortable. Then we had a few days with just perfect winter and stable temperatures from -5 C to -10 C, and toward the end we had rain, wind and suctiony klister conditions,” Skog says.

“But we’ve been really fortunate with the weather. Temperatures are manageable. If there was a blizzard for ten days straight, we would never be able to complete the challenge.”

Harder than any previous challenge
Skog explains that skiing Vasaloppet ten times back-to-back is physically much harder than any other challenge he has taken on.

Previously, Skog has biked from California to Florida in 24 days. Another time, he biked from the Ural Mountains to Portugal in 29 days and making it to the Guinness Book of World Records. But according to Skog, skiing Vasaloppet ten times in ten days is much harder than any of his cycling adventures.

“On a bike, you can draft a good portion of the time, which allows to recover during the ride. When you ski you have to do all the work yourself all the time,” Skog explains.

How did the overall project of skiing the course ten times in a row challenge affect the way you approached each individual event?
“You can’t approach this as a race. You really have to keep the intensity down, otherwise you will not make it the next day.”

How did you prepare for the 10-day challenge?
“When we stepped up to the start line in Sälen the first day, we had both skied more than 1500 kilometers this winter. We were equipped for all kinds of conditions, and had a strategy for how to approach the overall project.”

Did you get any physical problems?
“Yes, plenty. After a while, pretty much every part of your body hurts. I had to put tape and second-skin all over my feet every night because of the blisters. But again, you get stronger as you go, and as long as your aches and pains aren’t too serious, you sort of don’t really notice,” Skog says.

What was the biggest challenge – physically and mentally – and what did you expect the biggest challenge to be?
“I was worried we wouldn’t be able to eat enough. We were burning about 11.000 calories a day, but we managed to stay fairly well-fed. The clue is to eat real food. When you ski 90 kilometers day after day, you can’t rely on bars and gels. We stopped for a hot meal three times between the start and the finish, which added an hour and half to our finish times every day, but you can’t focus on the time.”

Will you do it again or recommend it to anyone else?
“The human body is extremely capable of adapting to the challenges presented. So, I think this is attainable for a lot of people given proper training and preparations, as long as the intensity is kept low enough.”