With a cohort of some of the best U23 skiers in the country, the program is setting a trend for young American skiers pursuing international-level and college skiing simultaneously.

How close? Well, all within 100 points in the NCAA team scoring system – which doesn’t mean much.

Team NCAA scoring is hard to comprehend. It is best described as archaic and arcane; a cumulative score between alpine and nordic across genders, and disciplines, over two days of racing (with no sprint race to be found).

You can understand it in archaic terms then – the four big programs that have historically dominated NCAA skiing all went into the final day with a notion that they might just add another title (UU, CU, DU, and UVM account for 63 out of the 69 titles awarded in NCAA history).

Then, the 15 k women’s skate mass start went off.

What happened within the first kilometer was anything but arcane. Three skiers, all clad in the white and red of the University of Utah pulled away as if they were out for a team interval session.

The sight of that trio, together, has become an international force over the past couple of seasons. Sophia Laukli, Novie McCabe, and Sydney Palmer-Leger earned a Junior Worlds relay medal for the US together in March 2020. They’ve since climbed into top tens on the World Cup together, also done a lengthy FasterSkier interview together as well.

Coming into this particular NCAA race, Laukli and McCabe had just come home from representing the United States at the 2022 Beijing Olympics, while Palmer-Leger came in looking for a third NCAA championship title in only her second year on the circuit.

The only question then, was which UU skier would take the race. As Sophia Laukli broke away from McCabe and came across the line to do just that, she checked yet another of the boxes for accomplishments all three had now achieved. Before McCabe and Palmer-Leger had NCAA Championships, then McCabe, Palmer-Leger, and Laukli did. It only added emphasis to the dominance of UU in NCAA skiing beyond that one race.

The UU nordic women had contributed roughly half of the points required to win UU’s third straight NCAA Team Championship, despite making up just a quarter of the team.

“I can’t take credit for building that, I’m just keeping it going” said UU Head Nordic Coach Miles Havlick in a call about the UU women’s dominant performance. “They’re a special group, unlike anything the NCAA has seen as long as I’ve been involved with it.”

Havlick has seen a lot. As an athlete for UU in the early part of the 2010s, he put together an NCAA career that was remarkable in the heights it reached – Havlick won two NCAA Championships in 2012 and 2013 – as it was in its pound-for-pound consistency over four years.

After a post-grad stint professionally racing for Sun Valley SEF and a couple seasons developing his coaching in the US, in Norway, and in Australia, he returned to the NCAA circuit, and to UU, in 2018. Havlick first stepped in as Assistant Coach before taking over the position of Head Nordic Coach in 2019, working with veteran ski director Fredrik Landstedt to bring the UU program to new heights.

Havlick may be quick to dismiss his influence in building the UU program, but there are implicit hints talking to him that his coaching is perfectly contoured to athletes wading through top-level racing while managing their development as a person.

“I like to think I use my racing experience, especially having raced a lot of these specific races…college is a challenging time where you’re developing, living on your own for the first time, and adjusting…and that’s without also managing an international racing career. Hopefully, I can relate and provide some wisdom to our skiers on how to do that.”

The particular knack for balancing skiers making their way onto the World Cup and wanting to pursue collegiate skiing became particularly important this season. Before the NCAA season had even started, the UU team was spread far-and-wide racing the World Cup.

“Sydney, Novie, and Sophia all were racing the first period of the World Cup. It was awesome they got that opportunity, and they all made the most out of it. It’s so easy to forget how young they are, and they were able to take whatever results they had with a grain of salt and just focus on skiing and learning as much as they can wherever they are.”

As rising juniors and seniors, Palmer-Leger and McCabe, and Laukli will be back at UU next year, and with their World Cup results this year, are all but sure to also be continuing to race internationally as well.

That, along with an equally talented core of male skiers, including NCAA All-American Sam Hendry and US Olympian Luke Jager, positions UU to continue its run of NCAA titles in the coming years. Something that Havlick says the UU team doesn’t take for granted. “I’m sure we have a huge target on our backs. It [would be] easy to coast and get stagnant. As long as we keep an attitude towards improvement and working hard, and on my end continuing to be smarter in my decision-making, I think we can stay as the top college program for years to come.”

That improvement in decision-making will include all the facets of coaching familiar to nordic coaches – waxing, training, team atmosphere – but at UU, it will also be precedent setting.

Along with UVM’s Ben Ogden, the NCAA titles of McCabe and Laukli this year marked the first time in NCAA history that American-born athletes won every race. The collegiate race circuit, long a gauge of where young US skiing stood in relation to international talents, saw that gauge blown wide-open in 2022. The bar for US skiers is now being set by other US skiers, with McCabe, Laukli, and UVM’s Ogden all making breakthroughs at the World Cup and Olympic level. With their success, the relationship between the collegiate circuit and national team is set to evolve too.

Positioned in Salt Lake City, just 90 minutes from the headquarters of US Ski and Snowboard in Park City, with four athletes who have already worn the US suit on the World Cup, the US Ski Team athletes at UU and Havlick are cognizant that they will determine what that evolution looks like:

“The strength of the American Juniors on the world stage was shown in the last few years, and now we’re starting to see that push through to the college age, especially here. I’m hopeful that we can continue to build on the relationship we have here with the national team, and that the trend we’ve seen, where the national team is realizing the benefits of college skiing, continue. That helps skiers in the US, and the US skiers who do go represent us [on the international stage].

“I’m not sure what she would say, but I think Rosie Brennan was a big influence, a good example.”

As a young athlete, Brennan pushed against the wishes of US Ski and Snowboard to compete for the US national team while skiing for Dartmouth with teammates like Ida Sargent and Sophie Caldwell. After completing her degree in 2011, she became a persistent domestic skier for Alaska Pacific University (APU), bouncing on-and-off of the national team while pursuing graduate-level education. Then, in 2020, a decade into her post-undergrad career, Brennan won a World Cup, and since has been one of the top skiers in the world. 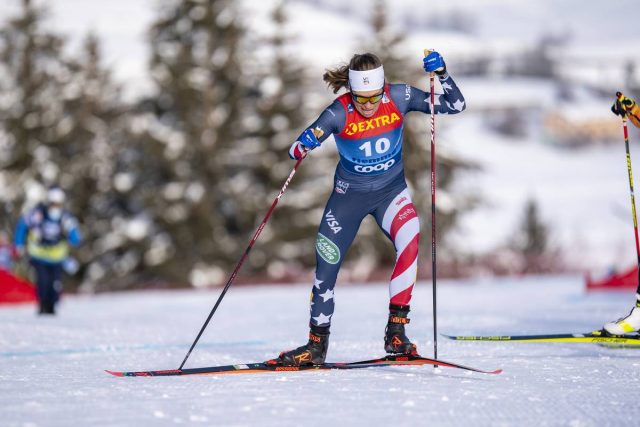 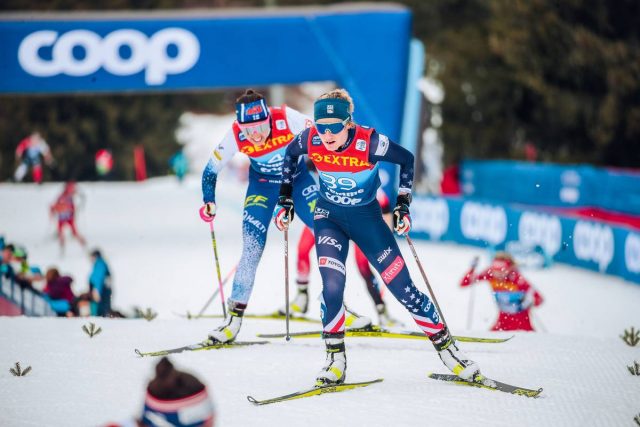 That success saw US Ski Team Head Coach Matt Whitcomb reflect to FasterSkier Reporter Nat Herz that US skiing’s previous stance towards collegiate skiing “[was] not realistic, because you’re not taking the American culture into consideration.”

(Read more about the shift in perception on NCAA skiing’s role in athlete development here.)

Building upon Brennan’s example, the international and domestic performances of athletes exploring the NCAA-World Cup duality demonstrates that American skiing culture is now pliable as to where its top skiers turn for development in their skiing, and in their lives.

What that balance of collegiate and international skiing looks like will be set by the phenomenally talented skiers who are currently at the top of the collegiate ranks, with support and collaboration from both their NCAA and US Ski Team coaches.

At the University of Utah, that influence is a central feature of the program, rather than an exception. McCabe, Laukli, Palmer-Leger, Jager, and their coach Havlick have already broken the precedents of US skiing and are looking ahead to next season with expectation and a simple approach, as Havlick says “We’re proud of this year, for sure. We’ll let those results be though as we start training…I just want to keep one thing – the culture of hard work and process.”