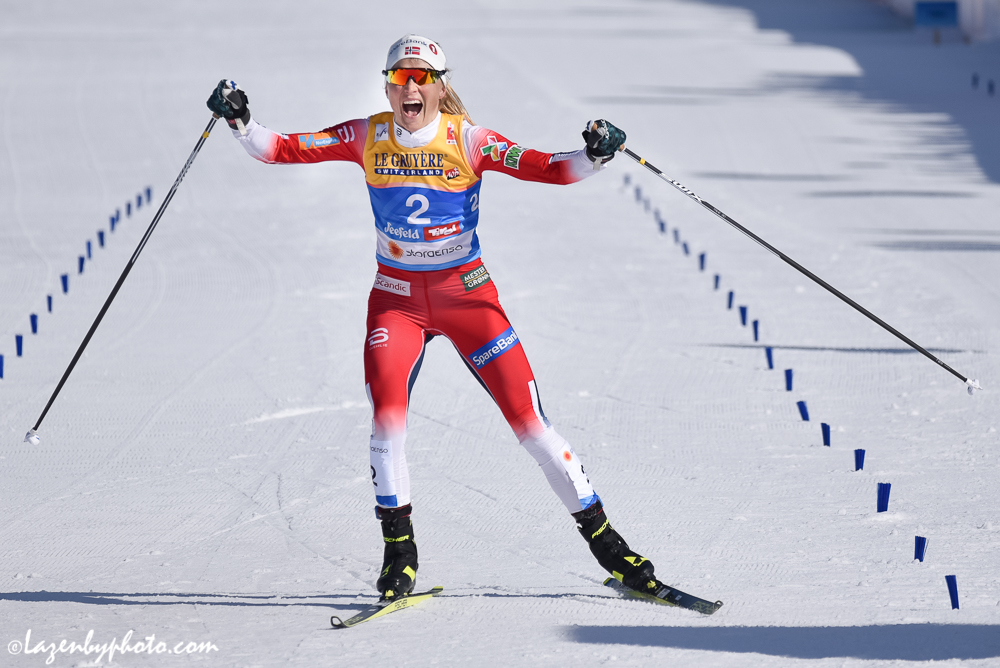 An emotional Therese Johaug of Norway stood atop the podium after the 15-kilometer skiathlon in Seefeld, Austria. While the race seemed to be decided during the second of two classic laps where Johaug began to pull away, the title has taken much longer to achieve. This moment was one she has been hoping for since she last earned the title during the 2015 world championships in Falun, Sweden. Johaug was unable to compete in the 2017 championships in Lahti or the 2018 Olympics in PyeongChang as she was serving an 18 month suspension after using a medicated lip balm containing the banned steroid clostebol.

“It’s been a big dream for me to come here to Seefeld for a long time now,” Johaug told the International Ski Federation (FIS) as she held back tears. “I’m looking forward for these championships for two years. The last time I was in the World Championships was in Falun, it’s four years ago now. I’m training so much and working so much for this. All the team around me have helping me everytime, so I’m really happy. The waxer team they were awesome today, I had so good skis, I could just fly out there.”

This victory was not unexpected; the well-decorated Norwegian has won each of the eight distance race that she has entered this season by a large margin and has over 50 world cup victories to her name. She adds this gold medal to a collection of three others in the skiathlon, a gold in 2015, silver in 2013, and bronze in 2011, and is now tied with her former teammate, Marit Bjørgen, for the most world championship medals in the event. 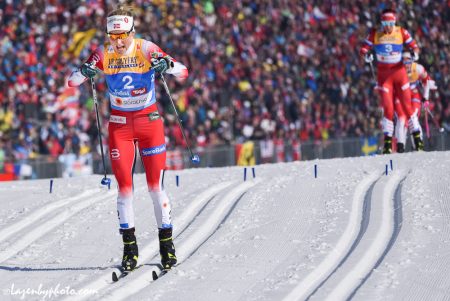 The day’s winner, Therese Johaug of Norway, at the start of her second classic lap during the women’s World Championship 15 k skiathlon in Seefeld, Austria. (Photo: John Lazenby/lazenbyphoto.com)

Johaug commanded the race from the gun, her powerful and flawless technique driving her ahead at a pace no other skier could match. At the exchange, she switched into her skate skis calmly and confidently, exiting the zone smoothly in just seconds. At this point, Johaug had nearly 30 seconds on the women chasing her, and 7.5 k later when she stopped the clock at 36:54.5, she was nearly a minute ahead. 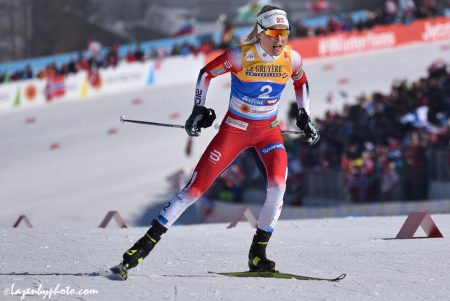 Therese Johaug of Norway during the skate leg of the women’s World Championship 15 k skiathlon in Seefeld, Austria. (Photo:John Lazenby/lazenbyphoto.com)

It was not until a final climb brought the trio to a hairpin turn before descending into the stadium for the final sprint that Østberg moved to the front and began to make her run for second place. She crested the hill with a small gap ahead of Nepryeava, with Jacobsen not far behind. Østberg flew into the stadium in a no pole skate, switching to V2 as she clinched her position in second place (+57.6). She crossed the line and into the awaiting arms of her teammate, Johaug, where she collapsed and began to let out shrieks of joy and relief. Her silver is her first individual world championship medal. 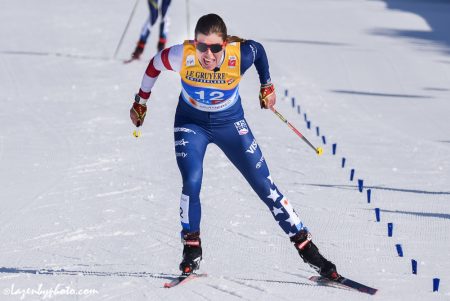 With added variables and little experience in the event, it can be difficult for athletes to set expectations in a skiathlon. Today’s outstanding results came as a bit of a surprise to the American women who went in optimistic, but without positive experiences to look back on.

“Skiathlons are tricky because we just don’t do that many so you never really know what’s going to happen or how you’re going to feel, especially once you switch skis,” Brennan told FasterSkier in a call. “Last year the skiathlon at the Olympics was literally the worst race of my life, so it’s been a while since I’ve had a good one, so I was a little nervous.” 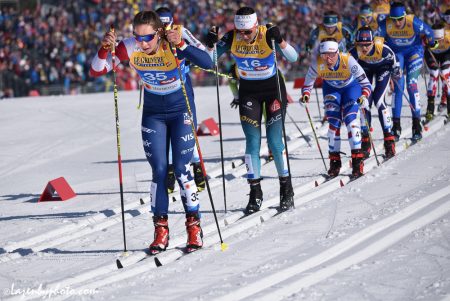 It was the second skiathlon Kern had completed; she was not happy with her result in the first and in the most recent one she entered at U23’s, she had to drop out due to illness. Her top-20 finish exceeded her expectations today.

“I had no idea what to expect, but I was really excited,” said Kern in a call. “My goal was top-40 and on a good day maybe a top-30, but I didn’t really know what to expect and my goal for today really was just to ski hard and see what I could do.”

“My goal was just to stay in the pack and be as relaxed as possible and see what else was left once we switched [to skating],” Brennan shared. “I’m really happy with how I skied tactically, I think it was one of the better races I’ve done tactically, that’s not usually my forte.

“The only regret I have is that I kind of forgot that in skiathlons, once you switch skis, that first k or so it’s super important to find the right group, but it’s also the most nerve-wracking k because you never know how your legs are going to feel once you switch skis,” she continued. “And I actually felt pretty good, so I wish I had pushed that first k in the skate a little harder to be in the front end of that chase group instead of the back end because I kind of wasn’t paying attention when that pack broke up. And the skate leg was a lot faster and flatter, so it was a little challenging to ski away from people, so the group you got in in that first few k really determined where you would be in the end.”

After the split mentioned, a group containing 2018 Olympic gold medalist Charlotte Kalla and Frida Karlsson of Sweden, Heidi Weng of Norway, Krista Pärmäkoski of Finland, and Anastasia Sedova of Russia pulled ahead of the remainder of the pack. These women finished fifth through ninth.

“I found myself in still a good group, and so I realized pretty quickly that it was going to be hard to ski away,” Brennan explained. “But I didn’t really want to sprint with four people, so I tried to make a move on the far hill and I think it dropped one girl, but it wasn’t really what I hoped for. So then I decided that then I would settle and have faith in my sprint finish. And I had really great skis, so I was able to draft well off the sprint downhill into the stadium and kind of play a good tactic into the finish and bust a move on that last little climb. So I was really psyched with how that worked out and how I skied that section.”

Brennan’s result is her second top 10 finish of the season, her first coming in the 10k freestyle race in Davos. The APU skier also raced in the World Championships in both 2015 and 2017, but today was her best result in an individual race. This progress is especially rewarding after a season hampered by illness. Brennan was diagnosed with mono at the end of the 2018 race season after a slew of less than satisfying results.

“I’ve been really psyched. After last year, I didn’t know if I would ever be able to ski fast again or even if I was going to keep skiing,” Brennan reflected. “So it was kind of an interesting summer, but I was able to have a really good training group at home and just focus in on what I needed to do, and that was really successful. I started feeling better and better as the summer went on and started getting more and more confidence and hopes for what the season to come would bring.

“And knowing that I was not on the national team and had to earn all my start spots, I wanted to come into Period 1 ready to race,” she continued. “I was really happy with that [plan], I did that really well and each weekend got better in period 1, so that was super successful. Then, because I had done that, I felt like I needed to take a break and do another training block to be ready for the championships since they were so late [in the season]. So I took some time and did quite a bit of training. I think that made me a little flat in the first two world cups when I came back, so I was a little nervous that my form had left me, but I was feeling good and my training had gone well, so I guess I had a hint of optimism. But I’m glad to feel like my form did come back and I’m racing at the level that I was in Period 1, so I think my plan worked really well. I’ve been really excited with all of that.”

Kern started the race with a slightly different plan than Brennan. The beginning of the race played out differently than she anticipated, but she quickly adjusted her tactics.

“I had a feeling it was going to start out pretty hot since I figured that Johaug would push the pace early, so things would string out,” explained Kern. “My plan was to start out fast and settle in, but I ended up – it was hard to pass people in the start, so I kind of just stayed relax the first climb, then in the second lap began to push the pace a bit. Once I got through the transition, I saw it as a new race, just skating.” 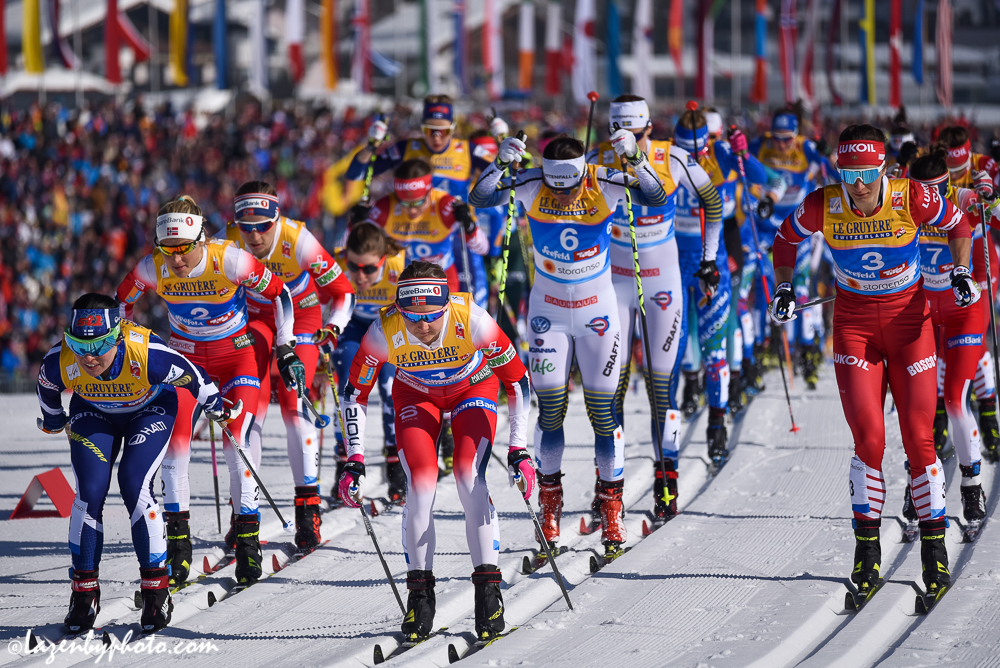 While her start was not as fast as she expected, she took advantage of her confidence and speed on downhills to move ahead in the second half.

“I had the absolute fastest skis out there –  they were insanely fast, the techs did an amazing job,” she said gratefully. “So even on the uphills if I would get dropped a little, I skied the downhills super well. A lot of people were skiing the downhills scared and my skis were so fast that I would catch and pass people every downhill. So it was this sort of cat and mouse game where on the uphills I would try to hang on and keep it as close as possible, then on the downhills just shoot by people. So it was really fun skiing knowing I had insanely good skis and that the techs had given us the best skis out there, so I could just focus on hanging on as long as I could on every climb.”

It was Frankowski’s first start in a World Championships. Earlier in the season, Frankowski won a pair of 10k’s while racing domestically on the Super Tour, one in classic and one in skate, and took second at the 20k skate at US Nationals.

“It was fun out there today,” wrote Frankowski in an email. “I felt much better in the skate portion of the skiathlon, but would have preferred a but slower conditions – there were some scary downhills. A big thank you to the techs for some good skis and the weather gods for bringing out the sun again for the race.”