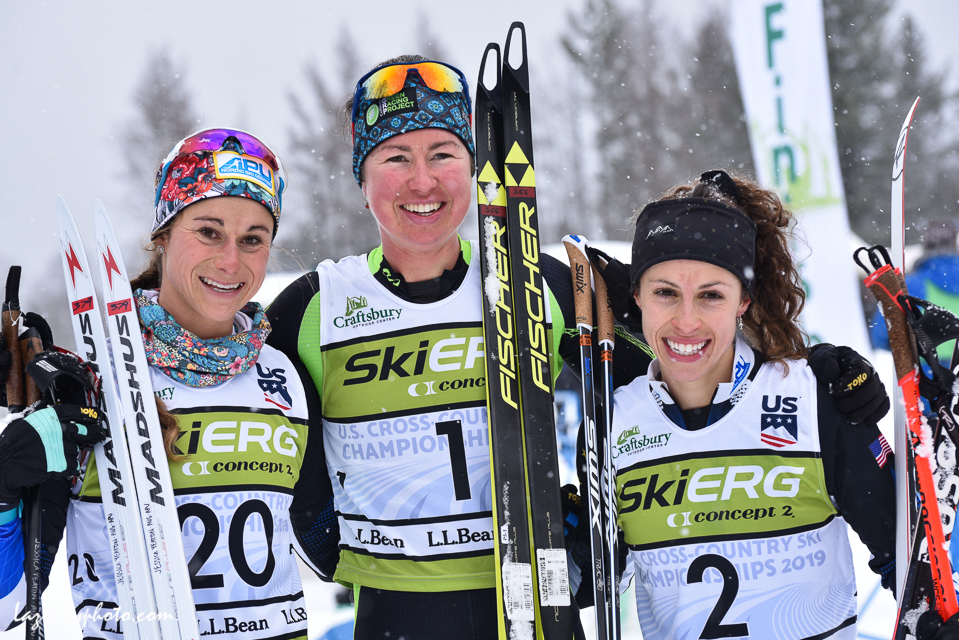 Another distance race at U.S. Cross-Country Nationals in Craftsbury, Vermont and another win for Caitlin Patterson of the Craftsbury Green Racing Project.

Count them up: eight U.S. national championships for the twenty eight year old. And in as many days at her home course, Patterson has further solidified both her legacy and the fact she is the distance racer to watch and match as the start gun fires.

On Thursday of last week, Patterson opened U.S. nationals with a win in the 10 k classic. Today, in a time of 59.23.1 minutes, ticking off k after k, Patterson won the women’s 20 k skate mass start.

“For the first [5 k] lap Rosie Frankowski and I traded off the lead a little bit,” Patterson told FasterSkier in Craftsbury. “She was leading the climbs and I was leading the downhills, but I could already feel it stretching on the downs. On the second lap when I pulled away on Kirby’s downhill heading towards like about 3 k into the loop, then the climbing was fairly good too, I just decided to keep charging and pull away. I skied a lot of the race by myself.”

By 10 k, Patterson had eeked out a lead over Frankowski (APU), coming through the mid-race time check in 29:34.1. Frankowski came through 14.5 seconds later. 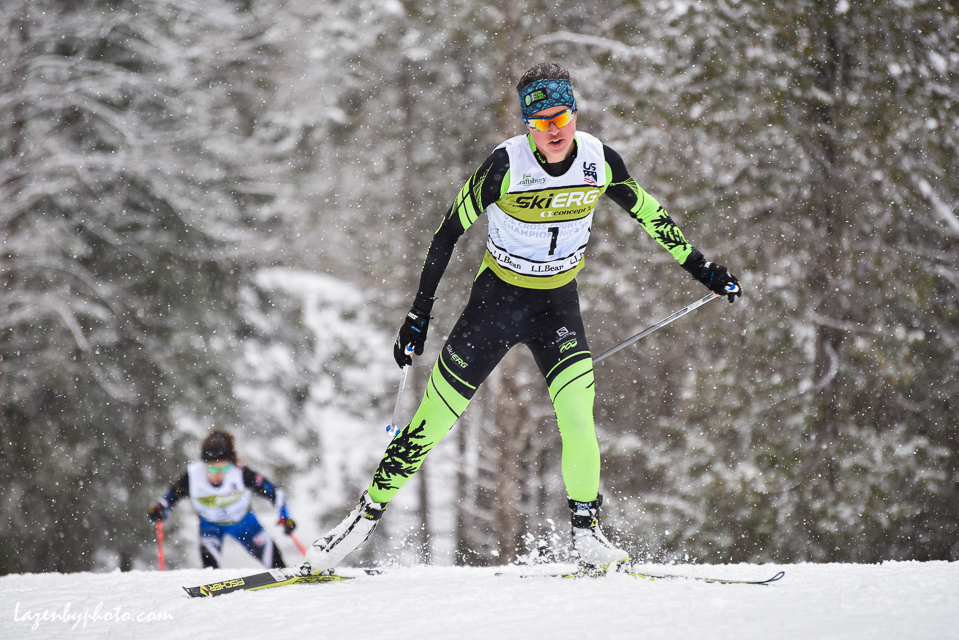 “I was getting some splits that it was stretching, but Frankie is definitely a really strong climber so I didn’t want to let up,” Patterson said. “I needed to keep myself moving on those uphills. I was moving along well and pushing the pace but also feeling like I was fairly confident that I was going to be able to hold it.”

Frankowski, a 2018 Olympian who placed 21st in the women’s 30 k classic in PyeongChang, remained true to her reputation as a gritty skier and thoroughbred climber.

“It was hard from the gun honestly, the plan I kind of had was to just go as hard as I could and make it so it wasn’t a giant group because I don’t like skiing in a giant group,” Frankowski told FasterSkier. “I knew that breaking Caitlin would be really difficult to do and the only place I could probably do it was on steep uphills.”

For the first 10 k, from Frankowski’s perspective, she attempted to execute her plan of attacking on the hills. Patterson could not be broken.

“I tried to take some uphills and punch them,” Frankowski explained. “It didn’t really work. So the last 10 k I was on the solo train just like dying.”

Catching glimpses of Patterson from time to time up ahead, Frankowski knew she wasn’t bleeding massive time to the eventual winner. Conversely, she understood skiers like Jessica Yeaton, an APU training mate, were seeking to link up from the back.

“I could hear them getting cheered for,” Frankowski recalled. “And then on the last 5k my leg cramped up on the big uphill and I was like ‘oh my god’ I just have to try and finish. It was hard to motivate. I was trying my best, it was a hard head game for 10 k.”

Frankowski was never caught, and her “head game” ended with a second place and a finishing time of 1:00:03 hours.

Yeaton, who skied the later part of her race with Hailey Swirbul (APU) and Evelina Sutro (UVM), was able to distance herself and take third overall, 6.7 seconds behind Frankowski.

“It was really hard work out there, the first lap I went out hard and then died a little,” Yeaton said. “So I’m really happy I was able to hang on and pull up third place in the end because there was a lot of fighting for position in the middle of the race.”

Yeaton also placed second overall in Thursday’s 10 k classic. She is an Australian national, as a result, Swirbul, the day’s fourth place skier, took third on the American podium.

“It was really fun, my first 20 k but I have done a lot of 15s,” Swirbul said. “It was familiar territory in that way. But it was really a lot of highs and lows. The pace went out hot and stayed hot I think the whole time, for me at least. But it was really cool to be able to ski with teammates like Jess.”

Racing continues at U.S. nationals with a skate sprint on Tuesday.