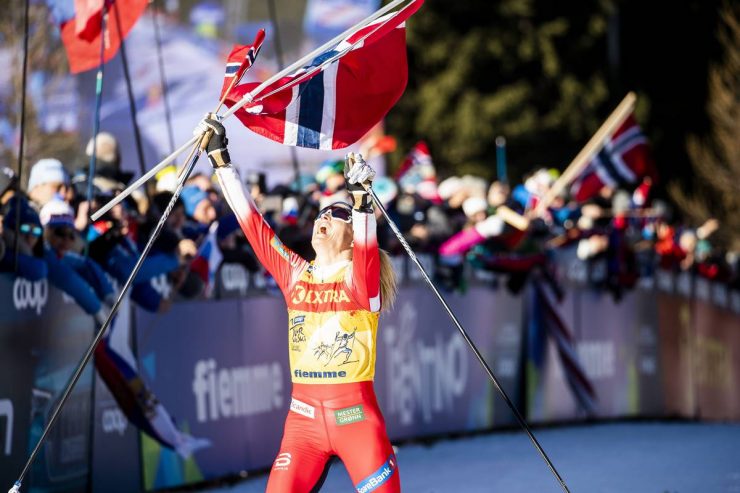 The fateful Alpe Cermis. The 10-kilometer capstone of the Tour de Ski, athletes complete the 1.5 k sprint loop before following the river valley down to the base of the alpine hill, climbing steeply for nearly 400 vertical meters to the finish. Bodies aching with the cumulative fatigue of the tour, racers are totally spent at the finish of the event. Crossing the line, they collapse with their faces pressed into the snow gasping for air and writhing in lactate-induced misery.

And so it was today.

First, a look back on Tours of the past. Unlike in the men’s event, the fastest skier up the Alpe Cermis has been the overall tour winner over the last four years.

Last year, Ingvild Flugstad Østberg was the fastest up the hill climb in 35:15.0 to take the overall win. Østberg was 42 seconds faster than the next skier, Krista Pärmäkoski of Finland. In 2017 and 2018, Heidi Weng was the first up the mountain by a similar margin. And four years ago in her most recent tour performance, Therese Johaug dusted the field, winning the day by a margin of 1:25.9. That’s nearly double the already large differential of her teammates.

Dubbed by Devon Kershaw an “once in a generation athlete,” Johaug has over 100 career podiums to her name, over 50 of which have been wins.

With this insight, it seemed safe to bet on Johaug in the final stage. However, the Norwegian superstar has proved to be beatable in this tour, much to everyone’s surprise.

Johaug was out-sprinted by Østberg in the final meters of the 10-kilometer classic pursuit in Stage 4, and the next day, she missed her first distance podium since she took 5th in the 5k skate in Toblach during Stage 4 of the 2016 Tour de Ski. (Johaug missed the 2017/18 and 2018/19 seasons while serving an 18-month ban after testing positive for the anabolic steroid clostebol, which was contained in a lip cream she used after sustaining a severe sunburn.)

Heading into the final stage, the overall standings looked like this: Norway’s Astrid Jacobsen trailed Johaug by three seconds. Natalia Nepryeava lurked 14 seconds back, and Ingvild Flugstad Østberg was 23 seconds back. Ranked as the top American, Sadie Maubet Bjornsen sat in 8th (+1:58), with Jessie Diggins 11th (+2:53).

Historically, the event has been run in pursuit format: the first person to the top of the hill wins. This round features a mass start format; racers will need to drop and gap their chasers to earn time in the standings. Identifying rank in the overall standings required lots of quick math to follow the flux in deficits; eleven seconds between Jacobsen and Nepryaeva heading into the final stage, nine seconds between Nepyraeva and Østberg, and so on.

One final note before we begin: Ebba Andersson of Sweden, who was ranked 6th in the standings (+1:07), withdrew from the Tour before the final stage.

As expected, the pace went out conservatively around the sprint loop. Racing on a narrow band of man-made snow that frequently contrasted the bare ground and asphalt beside it, Johaug stepped to the front, a string of her teammates that included Heidi Weng, Østberg, Jacobsen,  and Nepryaeva.

As they hit the hill, Johaug put her head down and got to work. She quickly created a gap to Heidi Weng and Østberg, who at first were willing to match the effort early in the climb, but quickly laid off, unwilling to succumb to temptation and risk flooding their legs with lactate too early.

It became a race for second place and a race against the clock. In the lead, Weng pulled Østberg and Nepryaeva up the hill, a gap to the next skiers. 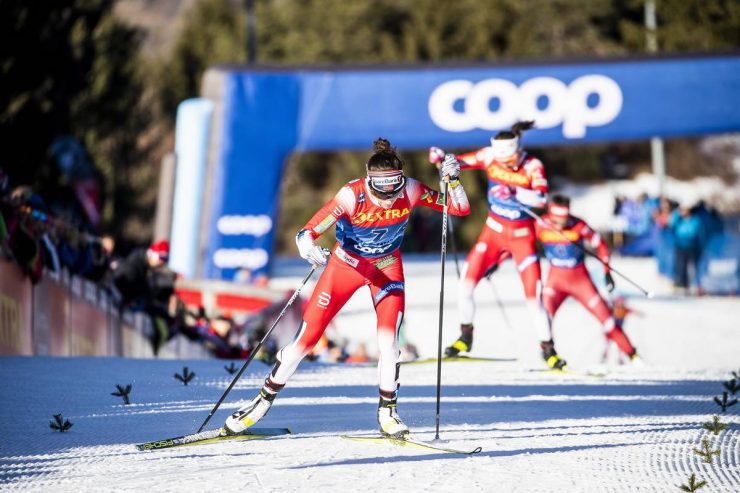 Heidi Weng (NOR) races for second place up the Alpe Cermis with Ingvild Flugstad Østberg (NOR) and Natalia Nepryaeva (RUS) chasing. (Photo: NordicFocus)

With Jacobsen nowhere in sight, Nepryaeva and Østberg fought for podium positions. At 9 k, Weng led Østberg by roughly four seconds, followed by an equivalent gap to Nepryaeva. Though Østberg matched Weng stride for stride, the Norwegians were not able to pull away from the Russian.

Meanwhile, Johaug steadily chugged up the hill, on her own by over a minute. As the grade mellowed in the final 200 meters, she had energy left to ski V2, her technique masking the fatigue she must have felt.

Waving the Norwegian flag high, Johaug shrieked with joy and relief as she stopped the clock at 34:21.6. 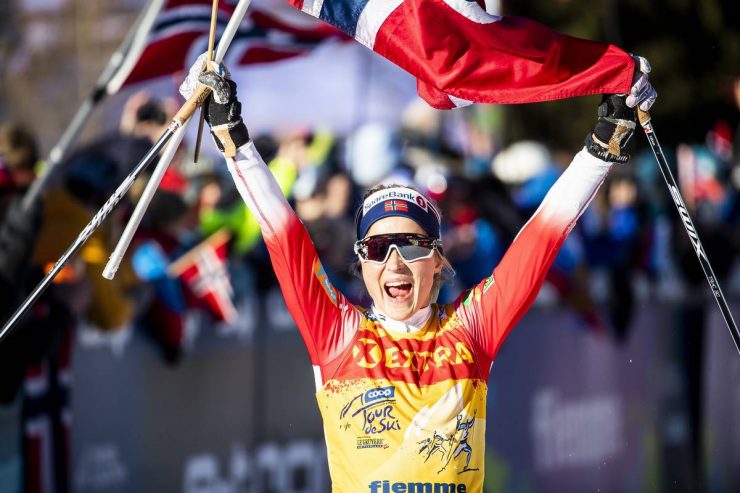 Therese Johaug celebrates her stage and overall victory at the finish of the 2019/2020 Tour de Ski. (Photo: NordicFocus) 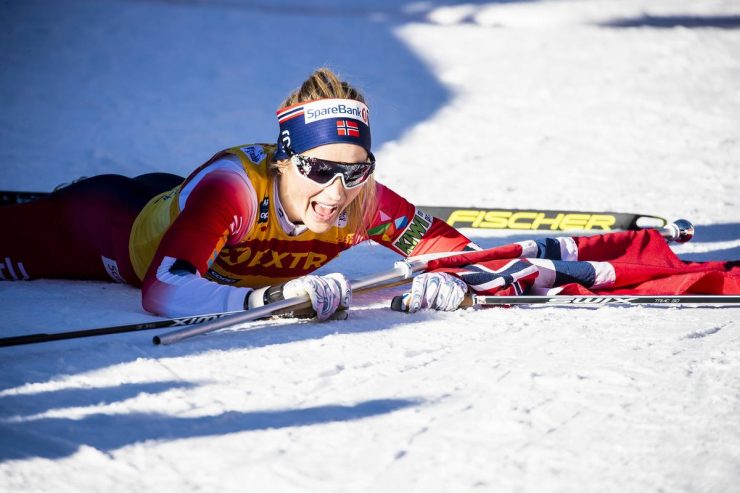 A hard earned rest for Therese Johaug after winning the hill climb and taking the overall victory in the 2019/2020 Tour de Ski. (Photo: NordicFocus)

Firing on all cylinders, Heidi Weng crested the steep pitch, powering through the gradually ascending final meters for second (+50.3). Østberg followed in her wake for third (+54.5), followed by Nepryaeva in fourth (+57.1). 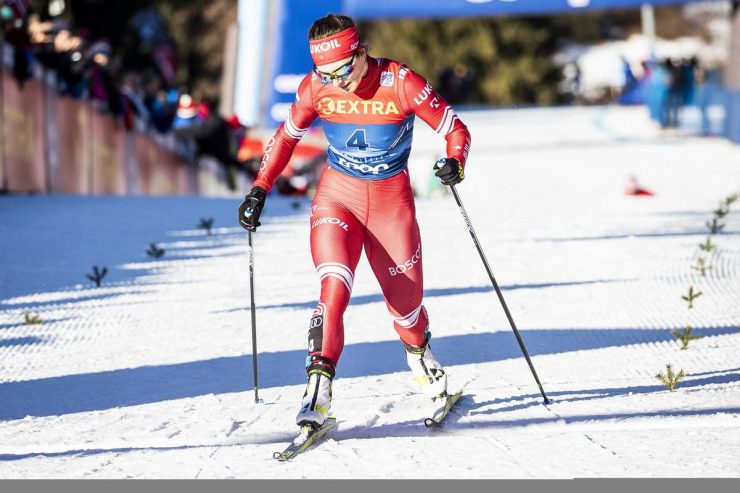 Throwing a boot to minimize her time back, Natalia Nepraeva finished 4th in the hill climb and 2nd in the overall 2019/2020 Tour de Ski. (Photo: NordicFocus) 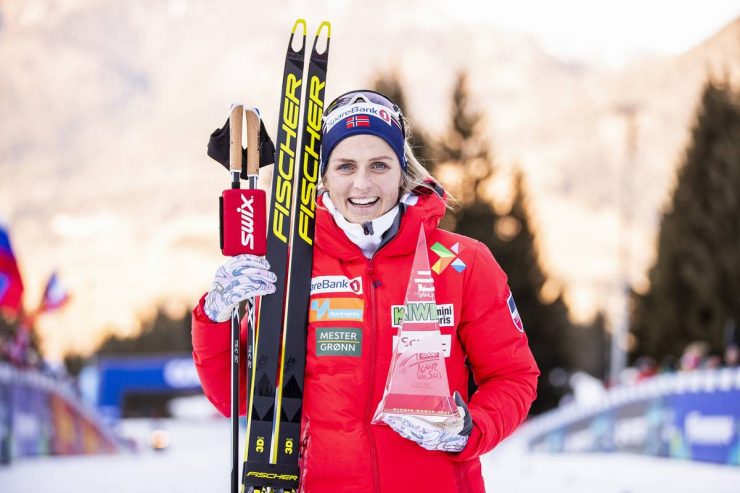 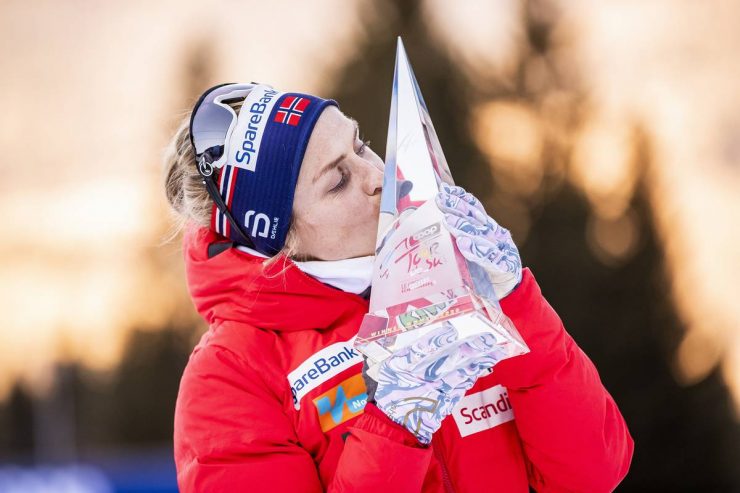 First to the top of the Alpe Cermis, Therese Johaug (NOR) takes the overall victory in the 2019/2020 Tour de Ski. (Photo: NordicFocus)

Winding along the Marcialonga in the lead group, Diggins kept her position in the top ten throughout the day. At first, she trailed Jacobsen, Theresa Stadlober of Austria, and Charlotte Kalla of Sweden as they began the climb, but Kalla and Jacobsen fell off the pace.

Losing contact with Stadlober, Diggins was in the unfortunate position of skiing alone. Despite having no one to chase, she climbed steadily, sitting in 6th at 9 k with her teammate Rosie Brennan closing from behind. 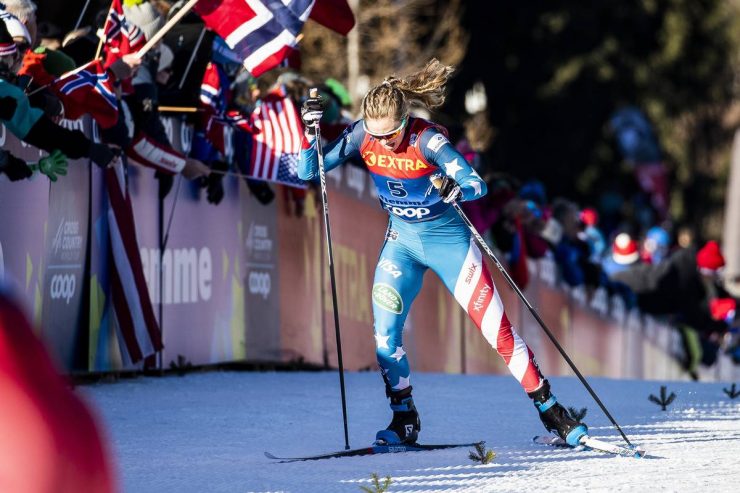 Holding her position, Diggins crossed the line for 6th (+1:51.1), chipping time off her deficit in the overall standings. With the hill climb, Diggins leapfrogged into the top 10, finishing 9th in the overall (+4:44.1).

“Today I was happy with my climb; I think I managed to pace it right so that I could keep moving up the hill steadily without blowing up – a line that is hard to find, but pretty crucial to get right! I had good energy and it’s nice to know that my fitness is in a good place even at the end of the tour,” Diggins wrote.

“Overall, this tour has been challenging in that I had many races where my fitness and effort weren’t reflected in the results. But I was proud of how I carried myself, contributed to having a positive team atmosphere and stayed positive without ever giving up, on the days when I had competitive skis but more important, on the days when I did not. It took a lot of positive energy, but now I can leave the Tour really proud of my mental toughness and ready to soak in all the hard work I put out there!” 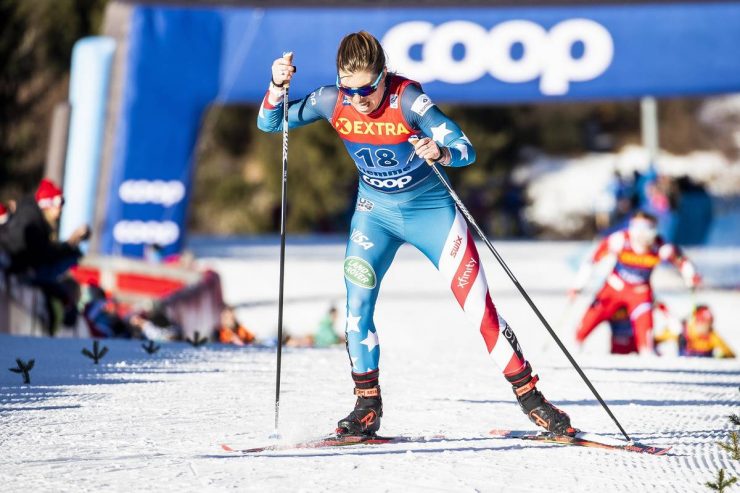 “Wow, it feels good to make it to the top of that climb,” Maubet Bjornsen emailed. “I think it is safe to say, making it up that alpine slope after six hard days of racing is quite possibly the most physically painful thing I experience. Just crossing the line is such an achievement. This is only my third time I have made it, so it still feels just as exciting as the first one!

“This tour has had its ups, downs, and painfully near misses. Despite the rollercoaster, I feel like I gained confidence in my fitness and my skiing throughout the process. Not only that, I had my best ever Tour de Ski finish, ending in 7th place.
“No doubt I will come away from this tour both physically and mentally tougher!
“Thank you to the support crew who allowed it to happen, and thanks for all the cheers of encouragement both on the tough and wonderful days!” 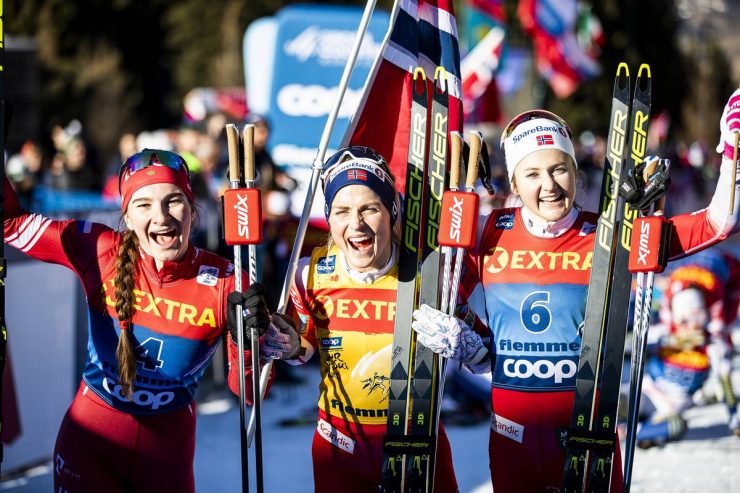 The 2019/2020 Tour de Ski podium:
Therese Johaug (NOR) took the win ahead of Natalia Nepryaeva (RUS) and Ingvild Flugstad Oestberg (NOR) in third (l-r) . (Photo: NordicFocus)