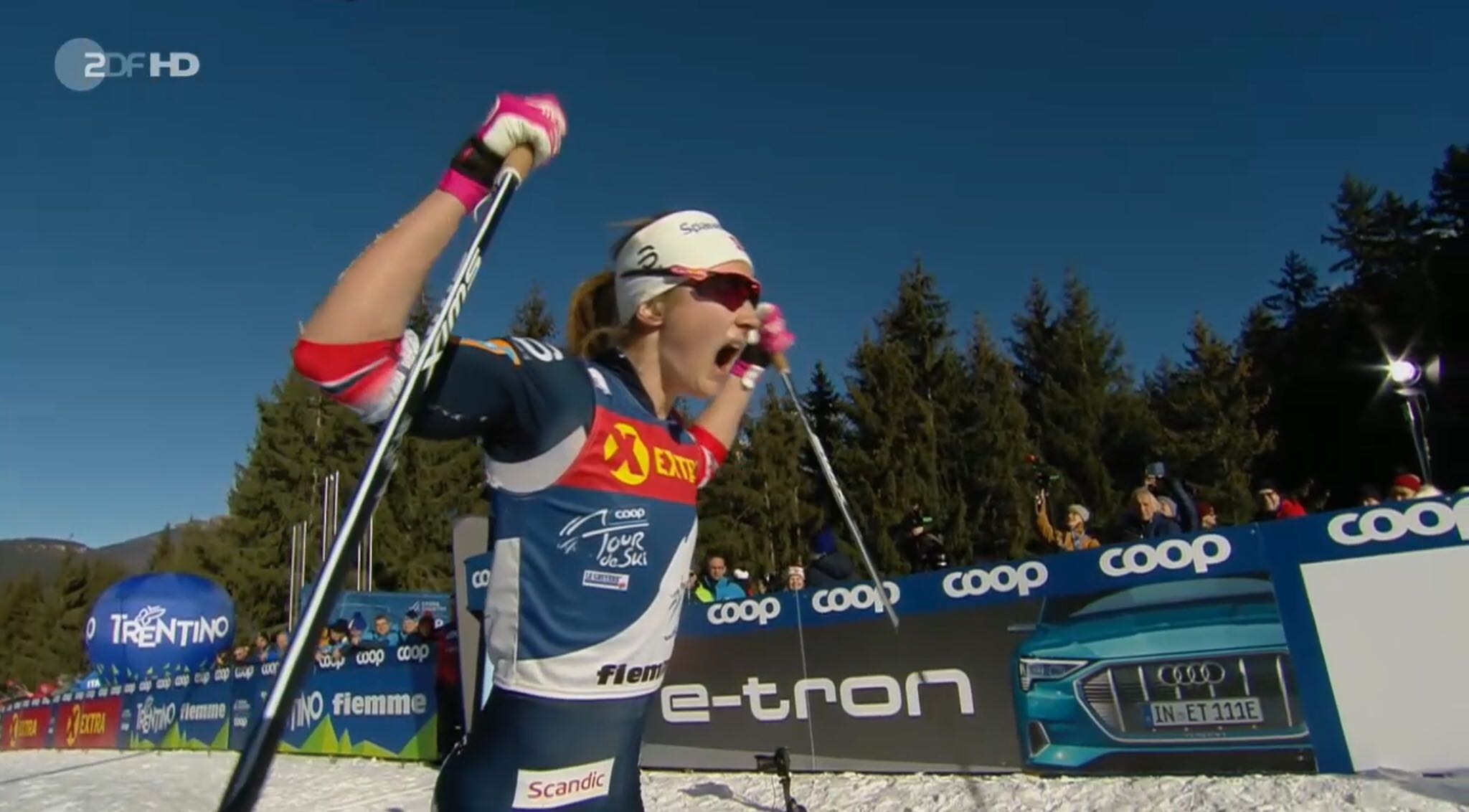 With the ascent comes the end.

The basic Alpe Cermis stats are stout: the slope approaches a 30 percent grade in sections, and averages 12 percent,  and climbs 420 meters in 3.5 k. It’s a lung-buster.

After the 60.67 k seven-stage Tour that began on Dec. 29 in Toblach, Italy, Ingvild Flugstad Østberg won her first career TdS. Like several of the wins Østberg took in this iteration of the TdS, she was off the front with a solo effort. The winner of Stage 4 through Stage 7, Østberg was in command for her Alpe Cermis ascent.

“It was a great day for me, and a big dream,” Østberg told German broadcaster ZDF after the race. “I am very very happy. Incredible. I wasn’t sure that I was going to win until the last kilometer. I had to work really hard, and it was a really really tough one. My legs were already tired when I started the climb so that I was able to cross the finish line first is unbelievable. So yeah, a big dream come true.” 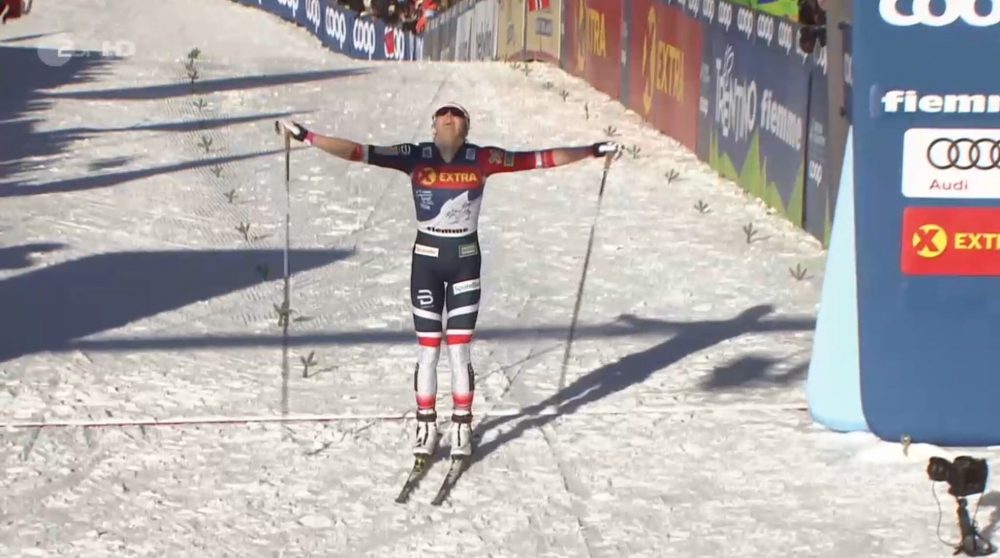 For the twenty-eight-year-old Østberg, the Tour winning dream had been snuffed out in recent years. Last year, Østberg came into the final Alpe Cermis stage in the leader’s bib, only to be passed by Heidi Weng on the climb. Østberg placed second overall. In 2016, again Østberg was passed by Norway’s Therese Johaug on the Alpe. Østberg was the overall runner-up.

The general pattern at recent Tour’s has been a flip-flop in the standings: the second overall skier starting Stage 7 has claimed the Tour title atop the Alpe. Of the last five Tour’s, before Østberg’s win today, Norway’s Marit Bjørgen in 2014/2015 was the last skier to wear the leader’s bib up the Alpe and still claim the overall. Østberg shattered that trend.

Russia’s Natalia Nepryaeva was the day’s second starter, starting 53.4 seconds after Østberg. Nepryaeva kept her bib 2 position intact by the finish, sealing a second place on the podium by finishing 2:42.0 minutes back in the overall standings.

With her second place in the overall, Nepryaeva becomes the first Russian women to step on the TdS overall podium.

Finland’s Krista Pärmäkoski placed third overall (+2:55.0). On the stage, Pärmäkoski skied the second fastest elapsed time, 42.8 seconds behind Østberg, while marking the third fastest time on the course’s climbing sector. It is the second career TdS overall podium for Pärmäkoski – she placed second to Weng in 2016/2017 Tour. 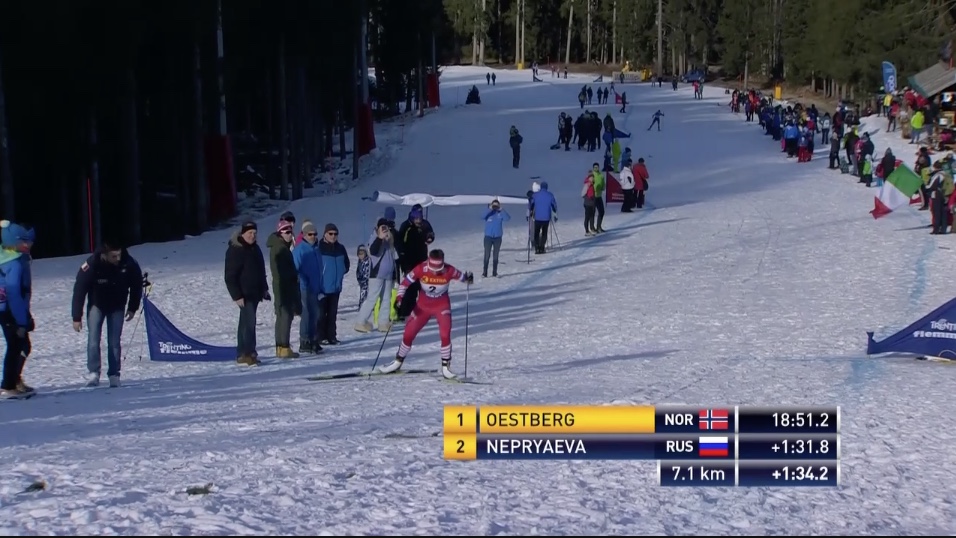 Østberg’s display of fitness on the Alpe was even more remarkable when considering no leading skier gained time on the Norwegian. Intent on winning her first TdS overall, Østberg’s effort only further distanced her rivals.

Diggins may have dropped off her career-best third overall in last season’s TdS, but this Tour brought with it three different podiums and the leader’s bib as she started Stage 4 in Oberstdorf, Germany. (Last year, Diggins earned two TdS podiums — the Stage 4 sprint was canceled due to inclement weather.)

“The older I get, the easier it is to remember to look at the big picture and remember that what makes a “good” race is determined by factors you don’t see on the results board,” Diggins emailed. “And for me, I was really proud of this tour because I had a lot of “good” races where I raced with grit, determination, and fought like crazy to do the very best I could with what I had in my body.” 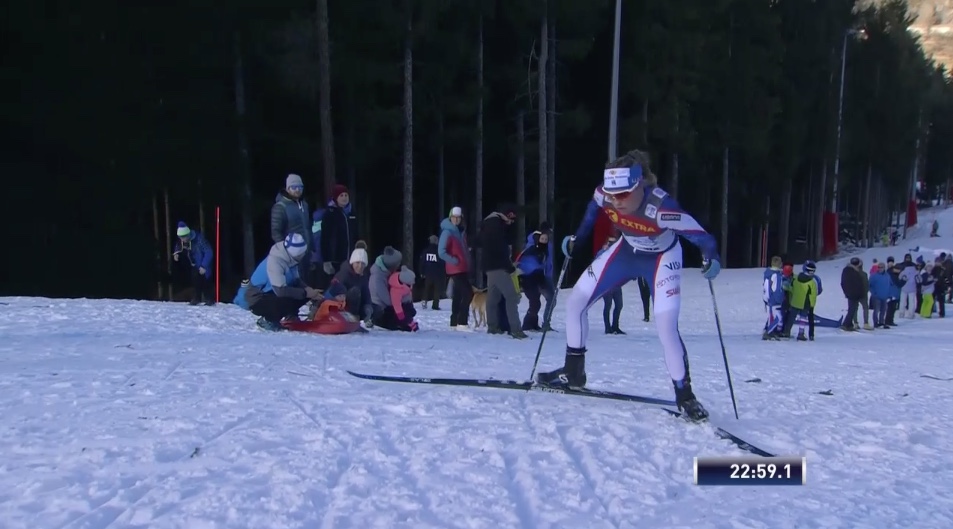 The blip for Diggins this year was related to wax. On Stage 4, a 10 k classic mass start, Diggins most certainly was strong. Her kick wax on a tricky day for kick, was lacking. Yet, despite kick that was tough to muster, she lost just less than one minute on the stage. Not a massive loss, but coupled with Diggins’s massive efforts over the TdS and her sapped energy, a come back for an overall podium spot was not a reality.

Diggins comes out of the Tour fifth in the World Cup overall, with 601 points. Østberg leads with a commanding 1152 points as the second period of the World Cup concludes.

“Today, like yesterday, my body was feeling run down and incredibly tired,” Diggins wrote in an email. “But I was proud of my effort and for never giving up, fighting my way up that crazy mountain! It’s really hard to describe the bone-deep tired feeling you get when you’ve been pushing your body so hard for so long, and it’s insane how painful it is when you finally reach the top of the final climb. It’s also one of the most satisfying feelings in the world, because you know you’ve just done something so amazingly hard.”

Now it’s time for Diggins to rest and determine her World Championship race schedule — Diggins raced the full complement of cross-country events at the 2018 Olympics.

“For me, what I really wanted to get out of the Tour in the big picture was the fitness boost that I get every year from doing something so incredibly hard and then resting and recovering well,” Diggins Explained. “So for the next 13 days, my focus will be on resting up, enjoying my time with my family in Seefeld, and then preparing for Otepää. I’m skipping Dresden to make sure I absorb all the Tour races well but I’m excited for the rest of the season, and super excited to cheer on our sprinters! … For Seefeld [World Championships], the jury’s still out on how many races I’m planning to do, but it’s definitely a more condensed schedule than the Olympics, so I’m going to be looking at where my energy is that time of year and which races have the most potential if I can’t do them all.”

U.S. Ski Team Coach Matt Whitcomb reflected on this year’s Tour and looked towards the future.

“First of all, I think next year we would likely see more Americans finish the Tour whereas on a championship year, three out of four years, we play things a little bit more conservatively, and this really went to plan not with regards to result but in regards to when people pulled out of the tour,” Whitcomb said. “We knew Sophie [Caldwell], Simi [Hamilton], and Kevin [Bolger] were going to pull out after three stages. We had good exit plans, you know, you look at things geographically, how do you actually exit? … So with regards to our exit strategy things went to plan; those three taking off after the three stages, Sadie [Bjornsen] and Erik [Bjornsen], I guess Erik got sick, but the intended goal was to have Sadie and Erik pull out after stage 5, and then to have Ben [Lustgarten] and Jessie finish it. So we got close, with the exception of Erik falling ill in the middle. You look at the athletes specifically, what intensity stimulus is going to be best for World Championships? Is it three races, five, or seven? And then is it possible to actually exit the Tour and get to the camp without having a seven-hour drive.?”

This year’s schedule and geographic proximity to Seefeld, allowed those exiting the TdS early to take a relatively short drive to the site of this year’s World Championships for a training camp.

Whitcomb also commented on the ups and downs of the Tour for Diggins, and how each day comes with challenges that might not be resolved as planned.

“It was by some measures a great success, she knew that she needed to have for an incredible Tour with about half of the races being podiums,” Whitcomb noted. “But the other half of that is that we needed to nail the skis seven days instead of just six and that makes a real difference. And to go with that she also had the last couple of days where she felt like she was out of energy and wasn’t able to finish the Tour as strongly as she did last year. … But you know, you start looking for answers and you can get lost in a wormhole pretty quickly. As far as I’m concerned she got tired two stages too soon and there’s nothing to worry about. She’s healthy and she’s going to go to Seefeld which has about 25 feet of snow right now and she’s going to feel like a little kid playing in the snow for a couple of days, recover for the better part of four days and then get back into some easy distance training again. So I think from a Seefeld perspective, I feel really good about things. Yeah, it would have been fun for her to finish on the podium in the Tour, she’s certainly good enough, but it didn’t happen. It’s a fickle sport that way.”