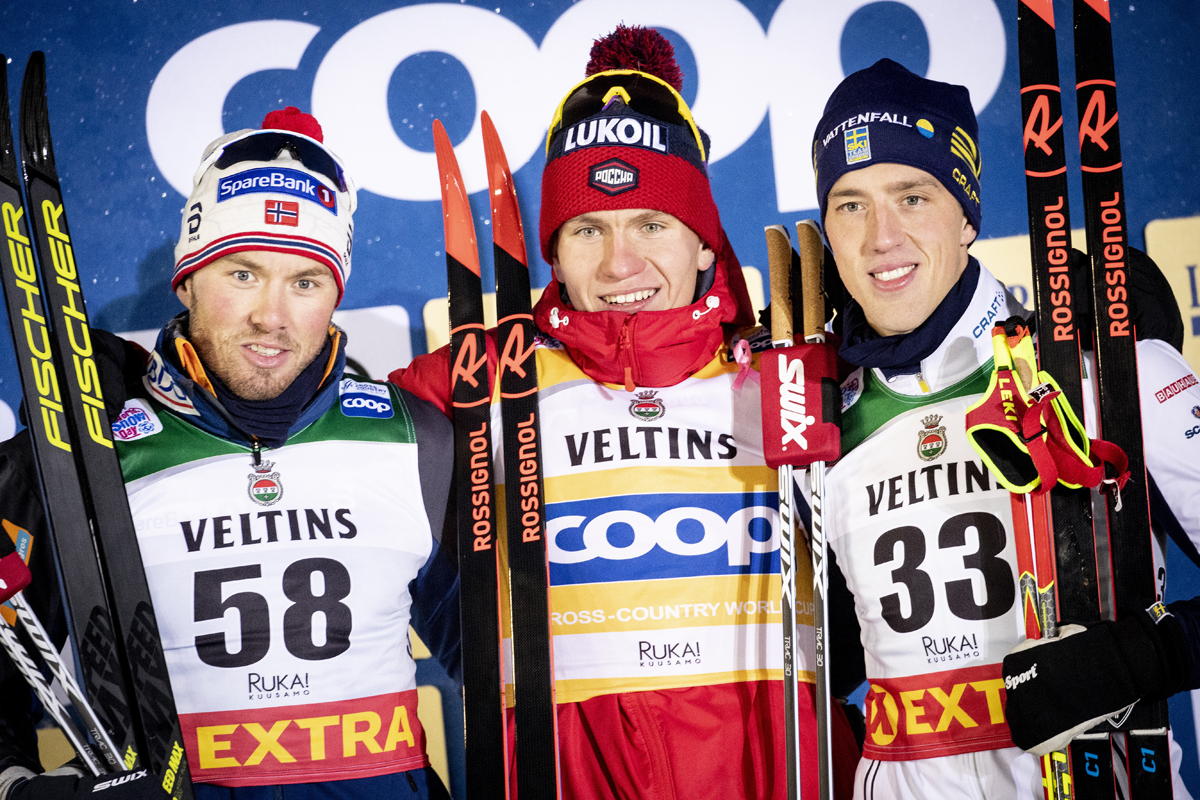 “I have no secrets,” Alexander Bolshunov told FIS in regard to his back-to-back wins in Kuusamo, Finland. On Saturday, the Russian had won a drag race with Norway’s superstar Johannes Hoesflot Klaebo during Saturday’s classic sprint.

Bolshunov had a commanding victory in Sunday’s 15-kilometer classic race. He stopped the clock with a winning time of 36:17.8 minutes. Early in the race, Bolshunov’s splits mirrored those of Norway’s Emil Iversen during which the two skiers’ times never deviated more than one second apart. 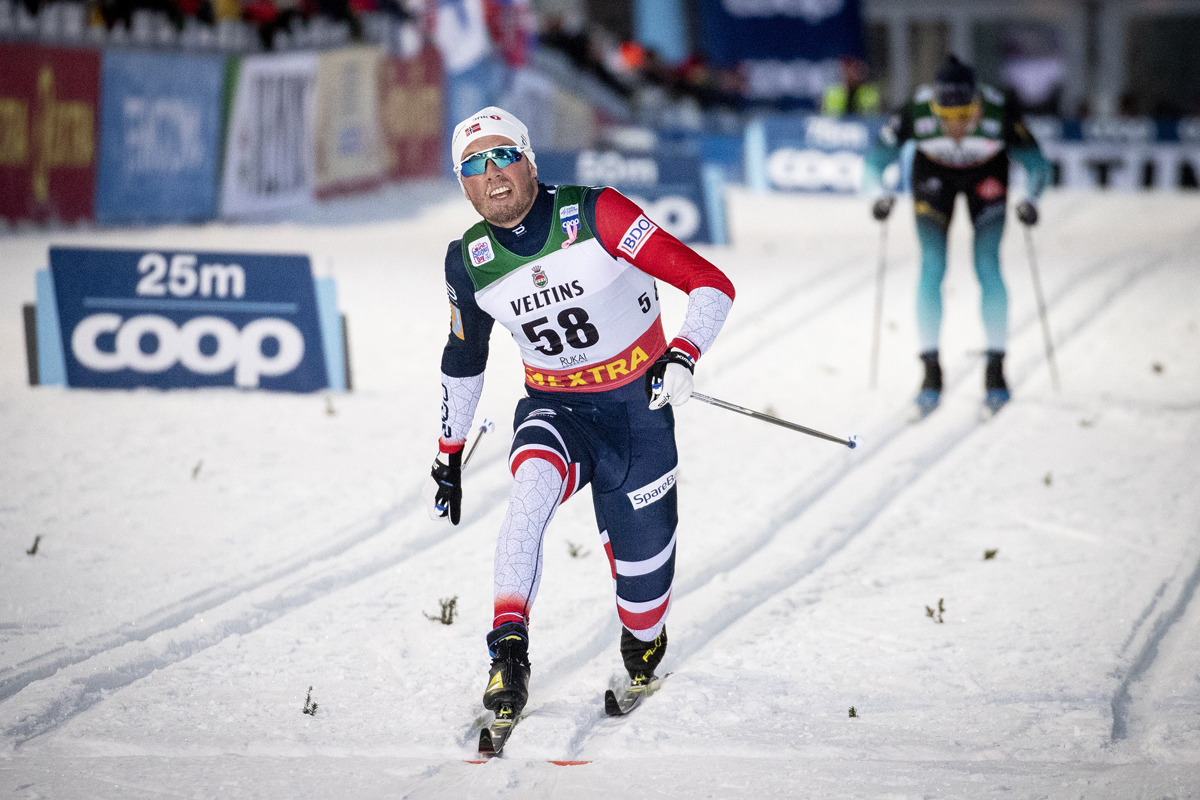 In his final two laps, Bolshunov began to pull away from the field, putting 19.6 seconds on the second place Iversen before the finish. Sweden’s Calle Halfvarsson took the third podium spot finishing 21.2 seconds back.

In a press conference, Bolshunov was asked whether anyone could stop him this season. He responded through a translator, “ It’s just the start of the season. It would be good if no one would stop me but we’ll say about it later.”

Iversen, who finished 9th in the World Cup standings last year said he was encouraged by his race today. “I have high expectations, I want to try to beat that result. Have to do good work all winter to do that, but good start for sure,” he said in the press conference.

Alex Harvey was the top North American skier finishing in 22nd (+1:13.9). Harvey had a strong start but slowly moved backward in the standings, which he attributes to poor early season pacing.

“I started way too hard today for how early I am in the season,” Harvey said via Skype. “The first lap I was going great everywhere, then second lap just a bit lesser, third lap worse, fourth lap worse.”

Despite a disappointing result on the day, Harvey is feeling positive about his racing in Kuusamo and is encouraged about his fitness at this point in the season.

“I wasn’t expecting much from the sprint and the sprint was actually really good from me,” Harvey continued. “It’s actually a PB [a personal best] for me here in Kuusamo. Today, just a bit disappointing, but I really feel like the pace I kept to the split at the first 1.1 k – I was third – so that was way too fast for me. I’m not a quick starter on any given day, especially before Christmas I need to pace a bit better than that. So a bit disappointed with the distance pacing, but happily surprised about the sprint day.”

In his first lap during Sunday’s 15 k classic, Harvey’s fast pace challenged Halfvarsson to push harder as well, which ended positively for the Swede. Harvey shared this as the highlight of his day, “I took Calle Halfvarsson to the podium today. … He lapped his second lap when I started so I caught him. … I was kind of disappointed in myself in the changing tent afterward and he came and just said ‘hey, thanks man, you brought on the podium today, so I have to thank you.’ So that was my highlight.”

Harvey also expressed his gratitude for the effort that went into creating the high-quality conditions expected at World Cup. This year has seen a lack of snow in Kuusamo. “It’s good to see that Ruka again did a really good job… they’ve had it rough this year, everywhere in Europe and in Scandinavia. I think they did a really good job managing to give us really good racing conditions for the weekend.”

Leading the U.S. men, Erik Bjornsen finished 31st (+1:50.0), just outside of the points. (The top-30 on the World Cup score points.) Bjornsen raced with consistent lap splits, maintaining a position between 29th and 34th at checkpoints throughout the race.

“It wasn’t the start to the season that I had hoped for, but I don’t think it was too far off,” Bjornsen wrote in an email. “Today, I didn’t feel great. I felt a little stiff, never able to open up and glide out there. I’ve always found the snow to be a little tricky here in Ruka. Hopefully next weekend I’ll feel a little more snap in the body. The goal is to be consistently skiing in the points.”

“I think he [Bjornsen] should feel good about skiing a really consistent race, being in the mix with some incredible skiers, and I thought he was attacking hard from lap one through four,” Whitcomb told FasterSkier in a phone call. “I think he’s in great shape.” 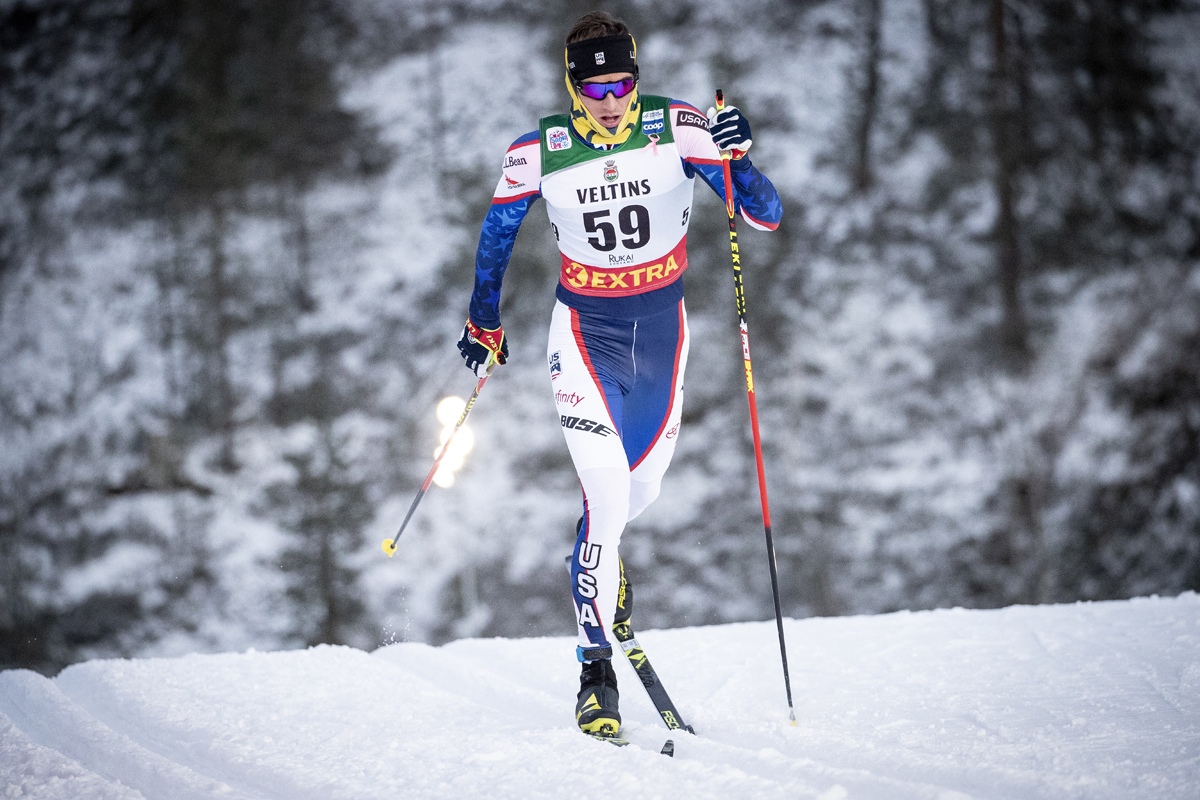 Next for American skiers was Adam Martin (CGRP) in 53rd, followed by Scott Patterson (USST) in 57th, David Norris (APU) in 59th, and Kevin Bolger (USST) in 63rd.

Whitcomb added that if the team was looking for stronger results, they would have arrived in Kuusamo sooner so the skiers could adjust to the conditions and time-zone. “We showed up and there was a Russian team that had been already skiing for 2.5 weeks in Finland,” he said. “So, each week they spend on the ground is worth, just sort of an automatic 30 or 60 seconds, just in these early season weeks, where you get your feet under you. When you’re coming from a place that is as far away as Russia or the U.S. or Canada or Australia, it takes a long time to settle.”

Whitcomb continued, “This year is better than any year that I’ve seen since 2006. And I think what the guys have really been missing over the years is some semblance of a stronger team, and they really have that now. So I think it’s gonna produce, with time, stronger results.”