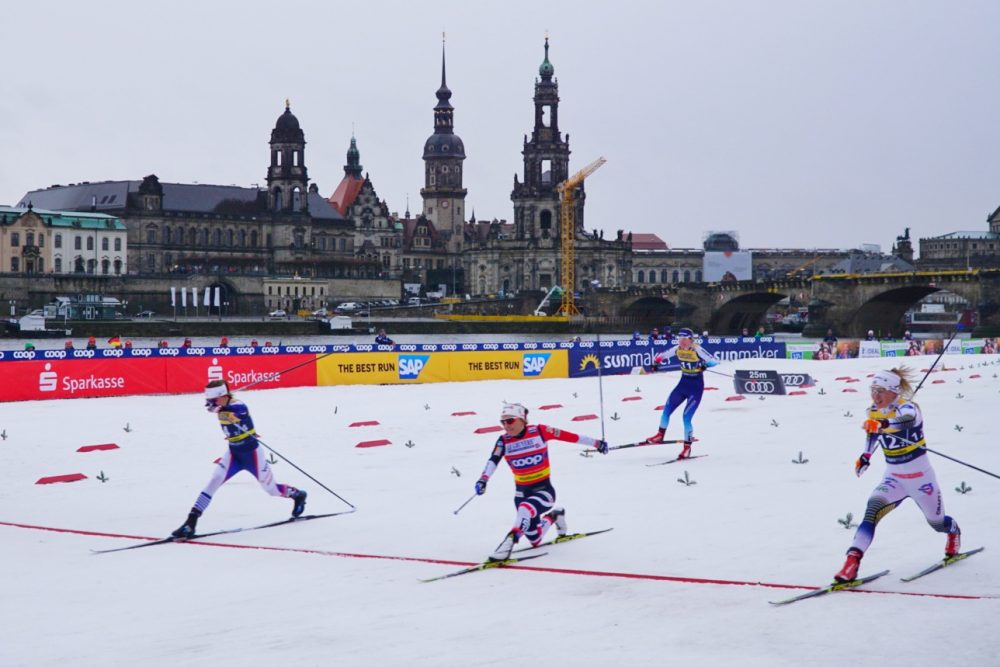 If the Grand Prix were to host a ski race, it might look like the Team Sprint in Dresden, Germany. With 10 teams racing the 6 x 1.6-kilometer final and the racetrack style, three-lap loop situated in the city’s center, the tactics of a Formula One driver seemed employable on the relatively flat course. For most teams’ skiers, that meant patience; staying in one’s lane and in contact until the last lap.

Norway’s Team I of Mari Eide and Maiken Caspersen Falla, the U.S.’s Team I of Julia Kern and Sophie Caldwell, Sweden’s Team I of Stina Nilsson and Maja Dahlqvist, as well as the Swede’s Team II of Ida Ingemarsdotter and Jonna Sundling remained the teams to watch heading through each exchange.

By the time she started her third and final leg, Falla appeared to have played the conservation game. When on course, she had taken a few pulls at the front, though for the most part, left that work to Sweden’s Team I and Team II second leg skiers, Dahlqvist and Sundling. With the brunt of the pace-setting work having gone to the Swedes, Falla’s engine seemed primed for a jumpstart to the front. 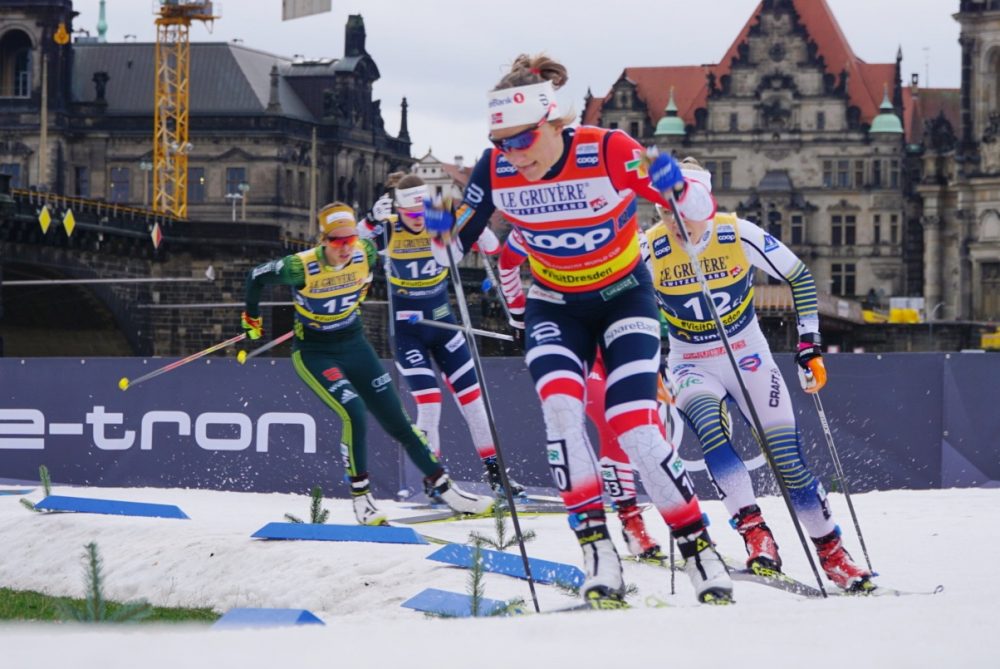 Just a few meters before the course’s hairpin turn, which shuttled racers back to the finish, Falla made her move. She pushed around both Sundling and Dahlqvist to take over the lead. A hard pressing Dahlqvist led the chase on the Norwegian’s ski tails, which included herself as well as Sundling and the U.S. Team I’s second leg skier, Caldwell.

Sporting the red leader’s bib, Falla looked in good form. Any challenge for the win would need to come from behind and the the opportunity to do so–in correlation to the course’s chances of survival in Sunday’s steady drizzling rain–was dwindling.

The quad of skiers, led by Falla, headed toward the sole, brief, gut-punch of a climb. Dahlqvist pushed to the inside right of Falla and using two powerful V2 strokes, the Swede had reached the top of the short uphill and the pinnacle of the city’s modernized race course.

What unfolded next was an aged battle: Sweden and Norway duking it out for the win.

Dahlqvist inched ahead. Descending toward the finish, it was Sweden leading Norway followed by Sundling and Caldwell. 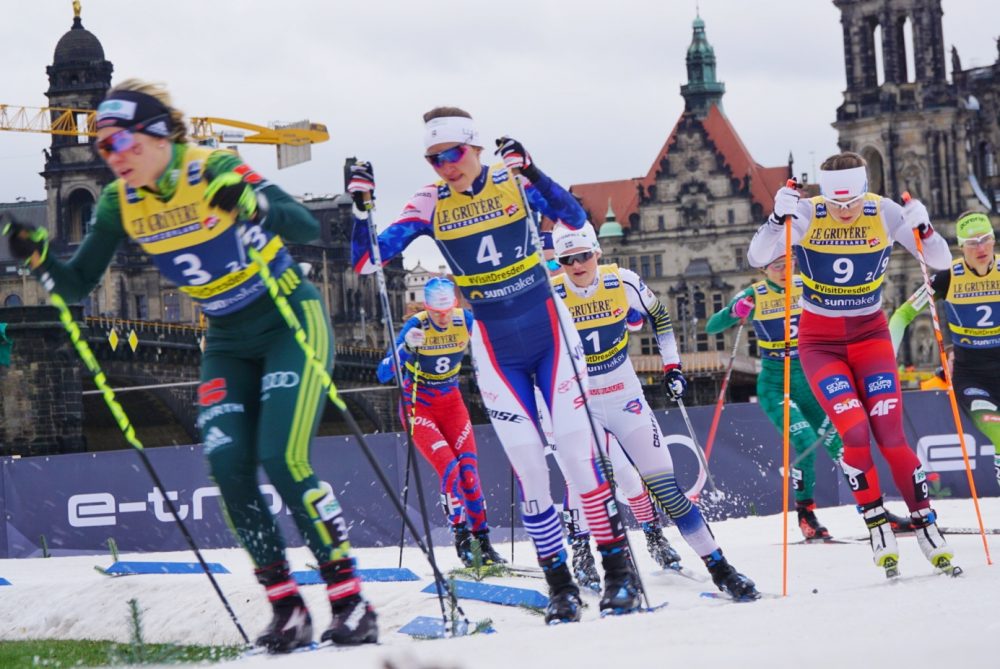 By the time the group rounded the last corner to the finishing stretch, Dahlqvist had increased her lead. Skating in a tuck, Falla scrambled to make up lost ground. The pressure for Norway in the race’s final moments quickly became less about overtaking the win and more staving off Sweden II and the U.S.

Crossing first to secure the win for Sweden’s Team I was Dahlqvist in a time of 24:02.45. In a three-way lunge to the line, Sweden’s Team II snagged second place (+1.11), while Norway claimed third (+1.11). Caldwell crossed fourth (+1.11) according to the International Ski Federation’s (FIS) photo finish.

“Today was a really fun day. Julia and I have never team sprinted together before, so we didn’t really have any expectations going into the day, but I knew we could be fighting in the final if we had a good day,” Caldwell wrote in an email.

In last year’s Team Sprint in Dresden, Caldwell teamed up with Ida Sargent and finished in third behind Sweden’s Team I and Team II. This year, Sargent raced on the U.S.’s Team II with World Cup rookie, Hannah Halvorsen. Sargent and Halvorsen finished Sunday’s race in 11th, just outside of advancing to the finals.

The fourth place finish for U.S. Team I on Sunday, was what Kern described as “bittersweet.’ The difference between Caldwell’s ski boot and Falla’s in the final lunge to the line barely discernible.

“The photo finish did end up being extremely close and I so badly wanted to get that podium for Julia’s first World Cup podium, but podium or not, I think it was still an awesome day for us,” Caldwell said. “We’re club teammates as well as national team teammates and are pretty familiar with how we each ski and have a lot of mutual respect for each other, so it was really just an awesome opportunity to go out there and get to show what we practice for all year!”

Both Caldwell and Kern ski for the Stratton Mountain School T2 club team. Though mere fractions of a second away from her first World Cup podium, Kern was focused primarily on the opportunity she had gained to race with Caldwell on the U.S.’s Team I.

She found out Saturday evening, after the women’s 1.6-kilometer freestyle sprint–in which Kern finished 19th–that she would be partnered up with Caldwell for Sunday’s Team Sprint.

“It was a dream come true,” Kern said of being selected to race with Caldwell on the U.S.’s Team I. “Going in to the weekend it was not what I expected, but after my qualifier heats yesterday, it was definitely on the table.”

Prior to the start of the race, Kern gave the camera a smile and wave, expressing outward excitement for her first Team Sprint World Cup start. Despite being slotted against the likes of Nilsson, Ingemarsdotter and Eide, Kern said she did not feel nervous.

“I think going into the race today, I tried to be really confident and wasn’t afraid to ski in front of Stina or didn’t really feel out of place because I needed to ski big and confident to hold my position,” Kern said. 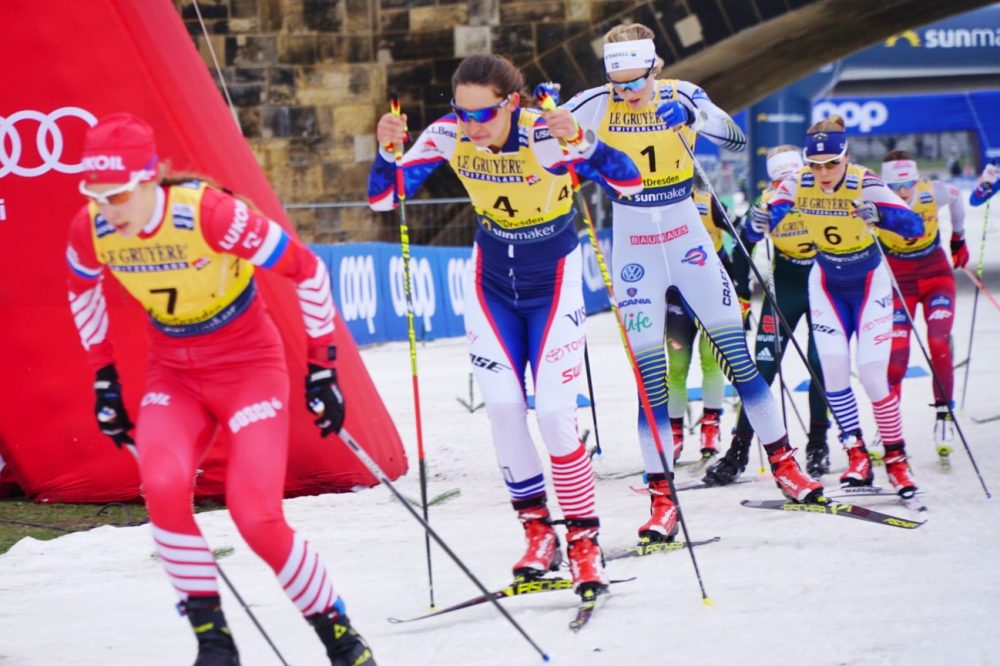 The biggest goal for Kern on Sunday was to maintain her position and as she put it, “stay out of trouble.” While on course, she narrowly avoided a crash between Russia’s Tatiana Aleshina and Slovenia’s Alenka Cebasek that occurred just after the second exchange.

“I just stayed relaxed and made my way around, which I was very happy to avoid that,” Kern said of the crash.

“In the final things got much more aggressive than in the semi-final. There was a lot more jostling around for position and pretty much everyone was skiing over each others skis,” Kern said. “You kind of had to ride that fine line were you were playing it safe so you weren’t risking falling or getting you pole broken, but also holding your line.”

Kern, as well as Halvorsen and Hailey Swirbul, who raced in yesterday’s freestyle sprint, will now head up to Lahti Finland as they prep for U23 World Championships slated to take place there from Jan 20. to Jan. 26.

“I had a blast racing my first world cup weekend,” Halvorsen wrote in an email to FasterSkier on Sunday. “I am happy about how things turned out because I put down two really solid races for me and didn’t make any big rookie mistakes.

“While I am grateful things went smoothly, it was a wake up call of how many things I have to learn,” she added. Especially racing in the team sprint, my inexperience became apparent where one or two people would somehow pass me on every turn or transition. I would have to work hard to regain my position, and I learned how important it is to hold your line.

“In both races I learned the importance of working every section, and how easy it is to lose time by not accelerating out of a corner or not pushing hard enough over hills, etc,” she continued. “I loved getting to see how well the U.S. World Cup coaches and athletes work together and was beyond excited to take a part in it. Thank you to everyone who made this possible for me!” 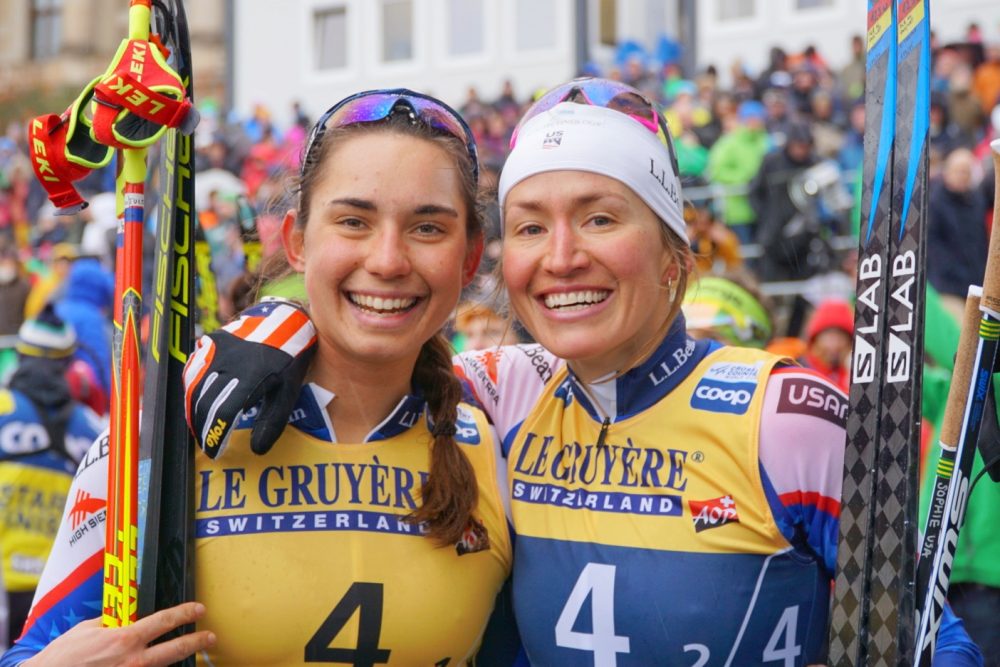