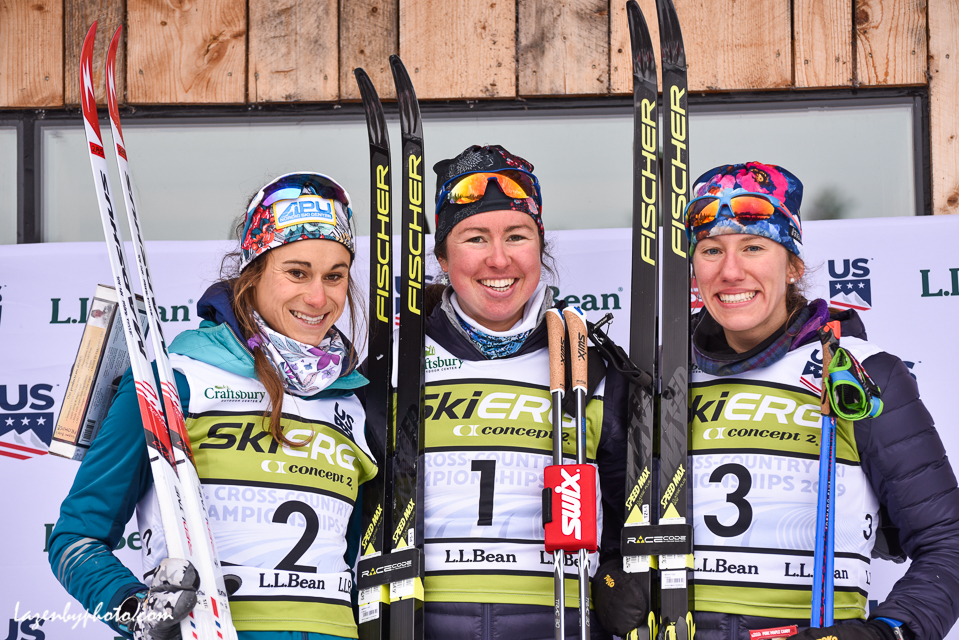 The attention of the domestic racing scene has focused on Northen Vermont’. Thursday was the first day of racing at the Craftsbury Outdoor Center which featured a 10-kilometer classic interval start for the women.

The home club, Craftsbury Green Racing Project (CGRP), had athletes take first and third in the women’s race. Patterson won in a time of 30:44.7 minutes.

At twenty-eight-years-old, Caitlin Patterson won her seventh national title on Thursday. This comes on the heels of last season’s nationals where she won outright three of four events on her way to securing a spot at the 2018 Olympics. At those 2017 championships in Anchorage, Ak., Patterson won the 10 k skate, 1.3 k skate sprint, was second overall in the 20 k classic mass start (but the first American), and won the 1.3 k classic sprint.

As a local who trains and lives in the off-season in Craftsbury, the course was a familiar and welcome sight despite the shallow or non-existent tracks.

“It was really fun, it was a good race, really fun,” Paterson told FasterSkier after Thursday’s race. “Definitely kind of messy conditions out here, we got about four inches of snow last night, really powdery stuff, and then based on when they groomed I don’t think all the snow got groomed in. When 300 men went by, the tracks were obliterated. So it was a lot of double pole and then a lot of just running the uphills. I’ve never seen that here at Craftsbury with so little tracks left —  just little snippets of tracks here and there.” 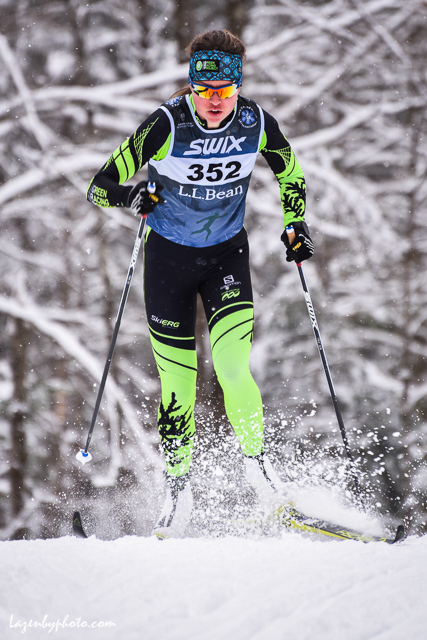 Caitlin Patterson (CGRP) on her way to winning the women’s 10 k classic at the 2019 Cross-Country Nationals. (Photo: John Lazenby)

Patterson was a discretionary pick to ski the distance events during the World Cup Period 1 races. She competed in seven individual World Cup distance races this season including a 4 x 5 k relay start with the U.S. team in Beitostølen, Norway where the team placed fifth.

Upon her return to Vermont, Patterson raced last weekend at Craftsbury which allowed her to better understand how to gauge her effort today.

“I raced an Eastern Cup last weekend, which was coming back down to sea level after a little bit of time at altitude, and so it feels like I can push harder,” Paterson said. “So trying to use some of the info that I picked up last week and just remember that I can push really hard at all parts of the course and there are a few places that you can kind of rest out there. I was thinking ‘make every second count, transition really well, take a little bit of rest when you can get it but mostly just hammer the whole race.’ I think that I have an internal sense of pacing, it’s not like I’m really consciously holding back in something like this, more like just ‘go harder.’

“Everything just came together,” Yeaton told FasterSkier in Craftsbury. “I know it was tricky conditions out there. It went well for me. … I went into it hoping to double quite a bit and actually it worked out pretty well because it was fast and the tracks were blown out a lot. So I was able to push the double pole a lot and just run out the tracks on the uphills and that seemed like it worked.”

In third place, also from CGRP was Kaitlynn Miller. Miller stopped the clock in 31:22.1 minutes. Like her teammate Patterson, Miller raced this season’s World Cup for Period 1 as the overall SuperTour leader last season.

“It went really well today, and I mean it is nationals so you take some calculated risk and I went out hard,” Miller said. “And I just hung on for the second lap. … Definitely, within reason, I paced the first lap a little bit but definitely pushed it pretty hard. And the just really sent it on the last lap and tried to have a strong finishing section and I’ll mention that it is really exciting to win the race, to have a teammate up there on the podium.”

Julia Kern (SMS-T2) was fourth overall and the third American. She finished in 31:33.9 minutes. Kern has raced domestically this season and prior to nationals was leading the overall SuperTour.

“It was a tough day, really nice snow, but really mashed-potatoes tracks,” Kern said. “It made it really hard for skiing — a lot of herringbone running which is very tiring but it was fun racing, fast and furious. Definitely a lot of hard work out there.”