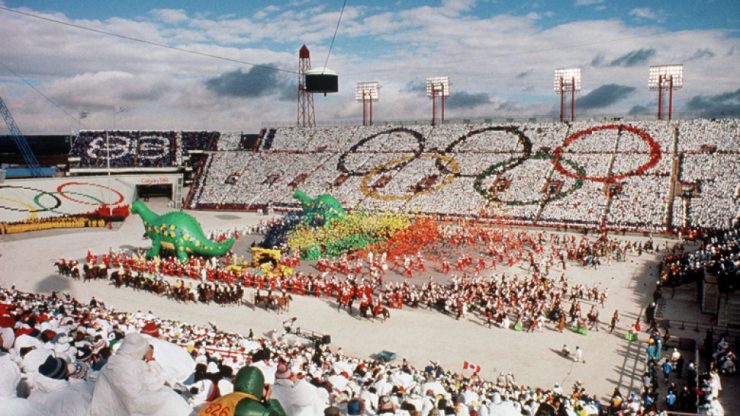 The Opening Ceremony at the 1988 Winter Olympics in Calgary, Alberta. Calgary is in the final three for hosting the 2026 Winter Olympics and Paralympics. (Photo: Olympic.ca)

(This evening, the CBC reported that voters opposed to Calgary’s bid for the 2026 Winter Games won 56.4% of the vote. According to the CBC, these are unofficial results.)

The Olympics are a global spectacle, but all politics is local. And when the two truisms go head-to-head in today’s plebiscite vote in Calgary, Alberta, local threatens to win. At stake is the future of one of three remaining host cities for the 2026 Winter Olympic Games, a status that has perhaps lost some of its former luster.

There were once seven cities that had progressed to the “dialogue stage” of potentially hosting the 2026 Games, including Calgary; Graz, Austria; Erzurum, Turkey; Milan–Cortina d’Ampezzo, Italy (joint bid); Sion, Switzerland; Sapporo, Japan; and Stockholm, Sweden. (Other boldface names, such as Lillehammer or Innsbruck, had previously expressed some interest but then withdrawn.)

Then Graz, Sapporo, and Sion withdrew, followed by Erzurum. As of Tuesday morning, there are three cities still in the running: Stockholm, Milan–Cortina, and Calgary.

But Calgary might not be on the list too much longer. As the New York Times headlined its story on today’s vote, “Does Calgary Really Want the Winter Olympics? Does Anyone?” The article begins, “Hobbled by a reputation for gross expense and corruption, the International Olympic Committee has become a mendicant, shuffling from nation to nation, shaking its cup and asking if anyone might be interested in bidding on the 2026 Winter Games.”

Calgary’s plebiscite, which is synonymous with a referendum vote, is technically non-binding – “but a majority ‘no’ vote would make it almost impossible for the project to continue,” noted GamesBids.com. The Calgary City Council has final say on whether the city proceeds with its bid. Today’s vote will help guide the council’s decision.

GamesBids.Com added, “More than CAD $2 billion (USD $1.5 billion) of Olympics funding promised from the provincial and federal governments is contingent on a satisfactory ‘yes’ result on Tuesday. The total taxpayer costs are estimated at almost CAD $3 billion of the entire $5.2 billion project.”

Here’s GamesBids.com on the “standings” of the other two remaining cities if the results of today’s vote lead Calgary to withdraw its bid at next week’s city council meeting:

Stockholm remains in the race to bring the first Winter Games to Sweden, but the Capital has failed to rally any government support for the project and it will need approvals in place before a January 11 IOC deadline.

A joint Italian bid between Milan and Cortina d’Ampezzo emerged just last month, but it lacks federal government funding.  The Italian Olympic Committee (CONI) has said that the regional government representing the two cities will foot the bill, and last week IOC President Thomas Bach confirmed in Rome that this plan would be accepted.

If Calgary voters say ‘no’ Tuesday, it will be the Italian bid with the best chance of being elected as 2026 host city when the IOC takes the vote at the end of June.

The site also notes that the last eight cities to proceed to a referendum vote have seen voters reject the chance to host the Olympics… but that all those cities were in Europe, and that the last two Canadian cities to take up this question, Quebec City and Vancouver, voted in favor.