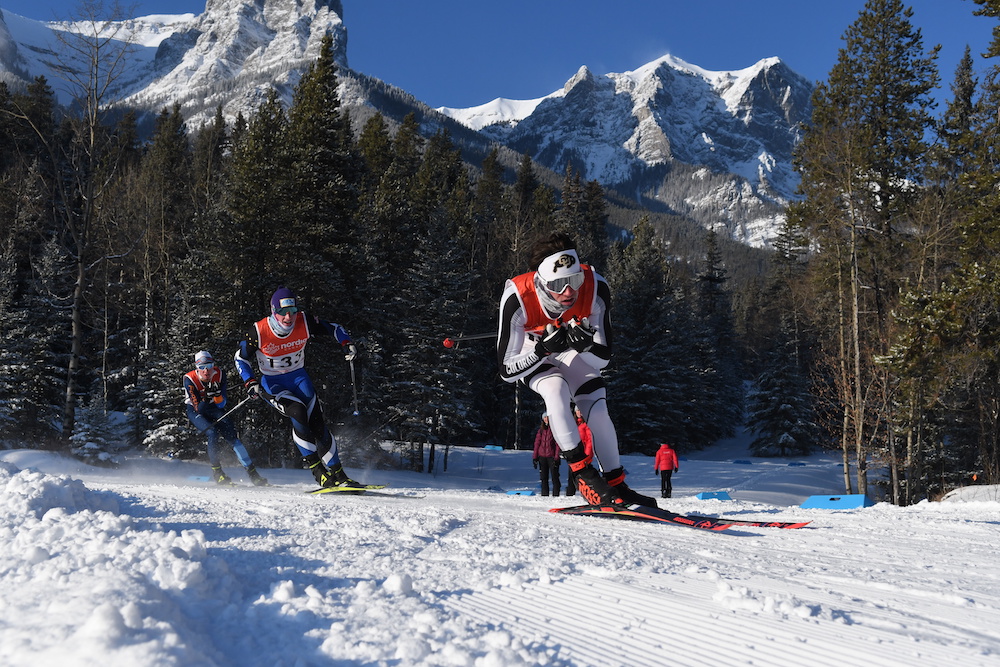 The first three race days of both the NorAm and SuperTour series are complete and the athletes and coaches are digesting the lessons.

It was free sprints Friday,  classic distance Saturday, and interval start free technique distance on Sunday. The men started the Sunday with a four lap 15km followed by the women doing a 3 lap 10km.

CGRP’s Ben Lustgarten nailed the pacing to win Sunday’s race in 42:56.0, just 0.8 seconds ahead of AWCA’s Jack Carlyle and 8.0 seconds clear of APU’s Hunter Wonders. Lustgarten was 37th at the first split and 10th after one lap before getting the fastest 3rd and 4th lap. Carlyle won the first two laps but faded to earn the 10th fastest final lap.

For the women, Caitlin Gregg showed that she is still on the top of her game, easily winning the 10km in 29:55.6. Saturday’s winner Katharine Ogden (Dartmouth) was 23.4 seconds back to complete her medal set with one of each. National team member Katherine Stewart-Jones was third at 1:00.6, after scoring second on both previous days.

This was Gregg’s second race weekend after the birth of daughter Heidi ten months earlier and a hamstring injury that caused her to miss the NYC Marathon in November. 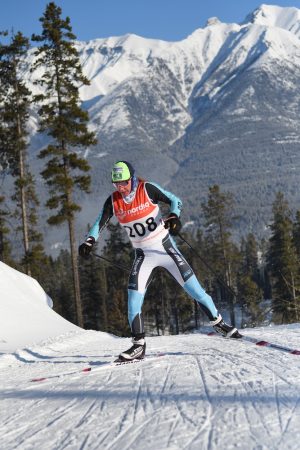 “Today was good confirmation that my fitness is on track after having a baby 10 months ago,” Gregg wrote to FasterSkier. “My goals are still day by day and week by week but I would love to represent the USA at the Theodore Wirth World Cup in March and of course the Birkie is always a big focus of my training.”

Gregg has always lived outside the normal development system, earning her first World Championship medal before her first national team nomination. This is Gregg’s year to get training priority, while husband Brian works full time as a financial advisor and takes the supporting role, with daughter Heidi leading the sleep-deprivation program.

The day by day goals are the result of Gregg’s hamstring injury, which is a complete rupture of the hamstring tendon from the ischial tuberosity (sit bone).

“All 3 muscles have detached but I have had an amazing team of doctors, surgeons and PT’s who have made the impossible possible this season!”

Medical consensus is that the hamstring will have to be surgically reattached, resulting in months of very limited mobility. Gregg’s hope is to delay that until after SuperTour finals and the Vasaloppet.

Stewart-Jones was the top Canadian all three days.

“Overall I am pretty happy with the racing, especially the sprint: I’ve worked really hard at improving my skate technique and I felt way more smooth than last season,” she wrote at the end of the weekend. “I felt really tired today but I pushed as hard as I could considering.”

That tired result was third place, after taking second on Friday and Saturday.

Russell Kennedy raced Friday and Saturday as part of his preparation for Europe.

“I am feeling good. I am fit but not peaking just yet. I have a lot of racing under my belt and a good sense of what is fast and what isn’t. Now just need to put the pieces together in Davos,” he wrote.

“I was working on my pacing on Saturday and it’s close. Davos is high and a steady course. I need to be ready for a hard last lap but also be able to hang on a good ride. I am hopeful with one more race on Thursday I will be in form for Davos.”

Kennedy’s Davos teammates Dahria Beatty and Emily Nishikawa skipped the Canmore races to test themselves at an OPA Cup in Slovenia. Beatty took bronze behind Slovenia’s Katja Visnar in the skate sprint Saturday while Nishikawa was 10th in the 10km free won by Italy’s Elisa Brocard on Sunday.

One of the primary goals of combining NorAm and SuperTour races is to gather a deeper, more competitive field.

A secondary goal for Canadian Head Coach Erik Bråten is to find out if there is “a lot of sea between the boats.”

“It’s not just a number,” Bråten explained, “not even to see if we are winning or not, but to see where are the gaps. Is it two people at the top, then a huge gap to the next Canadian?” 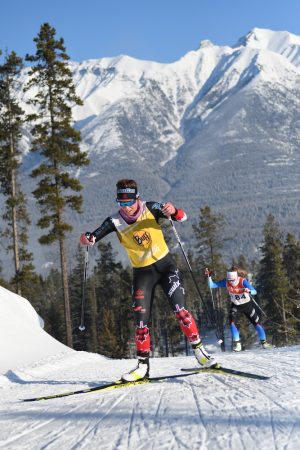 Katherine Stewart-Jones tightening her hold on the NorAm leaders bib on her way to a third consecutive top Canadian result. (Photo: Doug Stephen)

In the top-30 of the women’s sprint qualifier, there were 12 Canadians, 13 Americans, and five Europeans. Cutting it another way, we have four U20’s, four U18’s, and eight NCAA athletes. Counting full time students is more difficult, but it is probably about 12.  After removing the 71 U20 and U18 athletes from the qualification results, there are only 37 senior athletes competing for 30 places in the heats. If these were divided into separate NorAm and SuperTour events, every athlete would automatically qualify for heats.

For the men’s sprint qualifier, there are 14 Canadians, 12 Americans, and 4 Europeans. There was a single U20, two U18’s, and six NCAA athletes. There are 80 U20 and U18 athletes and 71 seniors, which creates a lot more pressure for the men to perform in the qualifier.

AWCA’s Jack Carlyle had good results moved down the sheet by the invading SuperTour athletes, with his 5th and 2nd places scoring 2nd and 1st on a virtual Canadian-only podium.

“I’m a big fan of the combined Super Tour/NorAm weekend,” Carlyle wrote. “High level competition is always a good thing, and having the best of Canada and the US is the way to do that.”

Stewart-Jones has spent more time on the NorAm podium than Carlyle, but had a similar answer about the bigger challenge.

“I love it. It’s always fun to have more competition.”

While you might expect junior national team member Anna Pryce who qualified 4th to want to ‘race up’ in senior heats instead of winning all three heats in U20, the choice was not hers, as Nordiq Canada’s Jeff Ellis explained.

“We currently have the option to let juniors race up and if they qualify for the Open heats they would race up.  If they failed to make the top 30 they would still have the ability to race in the U20 heats.  In Canmore we did not offer that option because the U20 category contained the athletes trying to qualify for the [Youth Olympic Games].”

At NorAms that aren’t explicitly part of a trip qualification, allowing the fastest U20’s to ‘race up’ creates closer more competitive heats for both age groups.

Attentive readers will notice that Canada has officially shifted away from named age groups in favour of the FIS-preferred U20, U18, etc. As habits are hard to change, the old names including ‘Junior Women’ and ‘Junior Girls’ are still visible in places. These names will eventually disappear, possibly as slowly as Kuusamo (Ruka), Ladies (Women), Cross Country Canada (Nordiq Canada), Lab City (Menihek), and SilverStar (Sovereign Lake).

The ‘B’ finals are also gone for this season. They were added back after the World Cup eliminated them, with the rationale that it would give a third heat to six more athletes in the four categories. As with the World Cup, nobody wants to watch a B final, few athletes want to race one, and eliminating four ‘B’ finals makes a shorter day for the officials and volunteers.

Doug Stephen has photo galleries for sprint, classic, and free. Athletes can download full-resolution images for their use if they credit ‘Doug Stephen’ or @vr45photography. 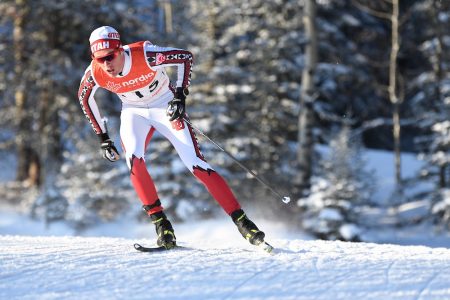