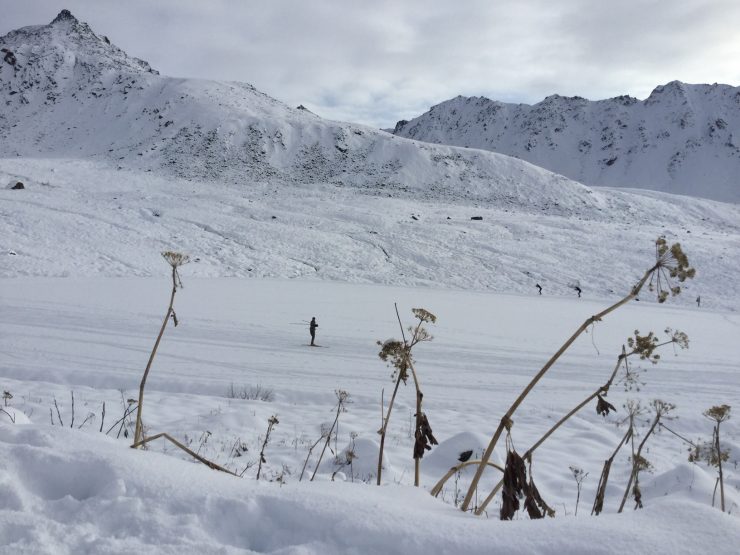 Skiers are framed by cow parsnip in front and mountains behind on the groomed trails at Hatcher Pass, above Palmer, Alaska, on Oct. 6, 2019. (all photos: Gavin Kentch)

HATCHER PASS, above Palmer, Alaska — The phrase “early season skiing” tends to evoke several things for your average skier: Dark. Cold. Rock skis. November. And so on. Think a training opportunity to be endured as much as enjoyed.

Happily enough, none of these things was in evidence Sunday morning at Hatcher Pass, elev. 3,500′, in Independence Mine State Historical Park in the Talkeetna Mountains above Palmer, Alaska. The sun was out. The views were expansive. The tracks were set; the coverage was good. It was literally Extra Blue conditions for classic skiing, with air temps in the 20s. No one could remember ever being this warm at Independence Mine for early-season skiing. Oh, and it was October 6.

As snowfall flirted with webcams over the past week, and the Mat–Su Ski Club moved its equipment into place and announced potential plans for the season’s first grooming depending upon accumulation, local skiers passed around weather reports like samizdat.

Then, Sunday morning, following roughly 10″ snowfall over the past few days, the pilgrimage to an area once described as like “skiing through an Old West ghost town turned collectible Christmas village” began. The parking lot filled with vehicles bearing themed plates expressing a love for moving across snow, whether on skis or dogsled runners. SKI4VR. XCMOM. IDT105. (An Iditarod Finisher license plate with the IDT prefix is available only upon presentation of one’s Iditarod Trail Committee finisher number to the Alaska DMV.)

A range of jackets and drinkbelts accumulated at the unofficial drop spot in the middle of the mine loop, the universal sign of a bevy of skiers out training somewhere nearby. There were many branded jackets, with Alaska as a common theme: Alaska Winter Stars, Alaska Pacific University, Alaska Nordic Racing, University of Alaska Anchorage, Team Alaska.

The skiers present had roughly the qualifications you would expect for a group of athletes logging a 2-hour on-snow OD over hilly terrain on October 6. The juniors had Besh Cup podium finishes and Junior Nationals starts for Team Alaska; the seniors had SuperTour wins and national championships and World Cup and Olympic starts; the masters had Birkie age group wins and Masters World Championships medals. The median age was somewhere south of 25; the median VO2Max, somewhere north of 50; the SPF of the sunscreen, at least 30. And everyone, young or old, training or touring, was smiling very, very broadly as they made their way around the historic gold mine buildings.

Then eventually, as morning stretched into afternoon, the sky turned first scumbled, then leaden. A light snow began to fall. It was time to go home.

Whether winter is already upon you, or is just a glimmer of hope somewhere on the horizon, please enjoy these pictures from opening day at Hatcher Pass. 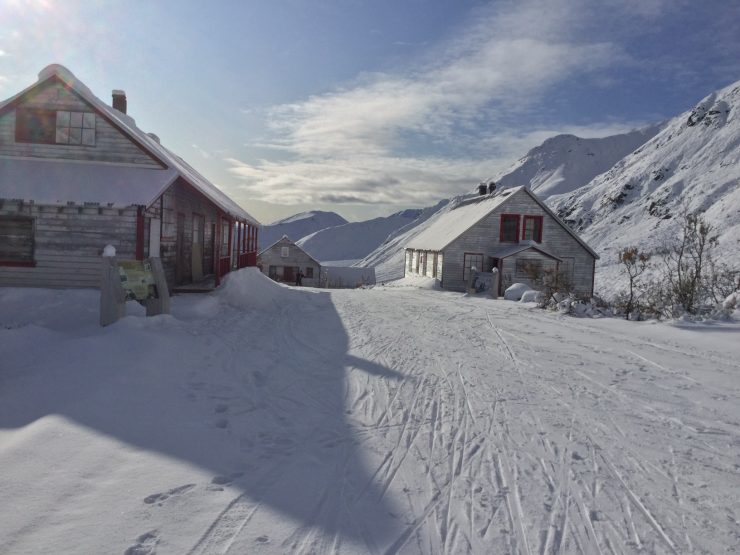 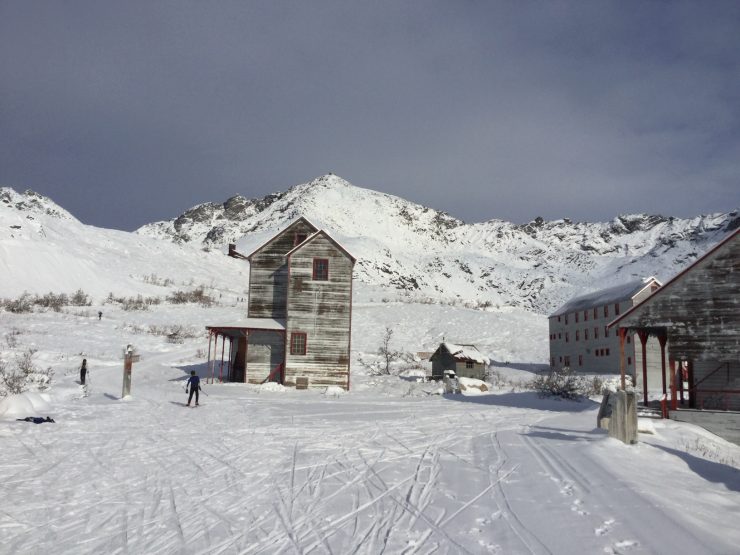 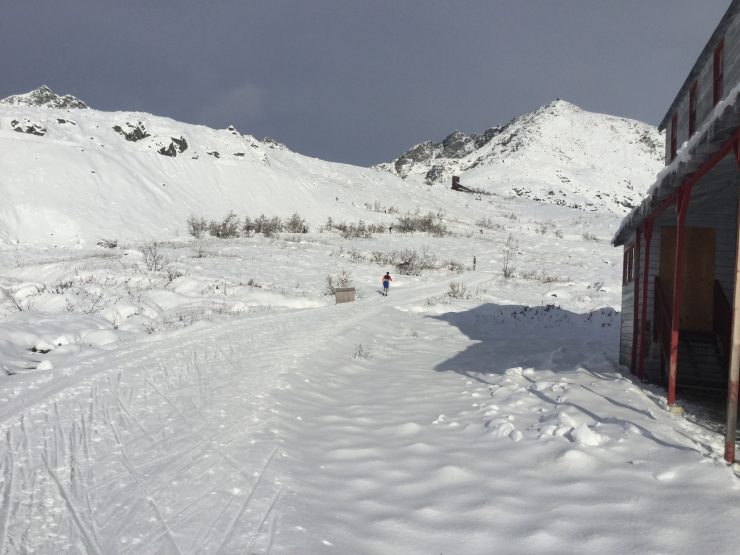 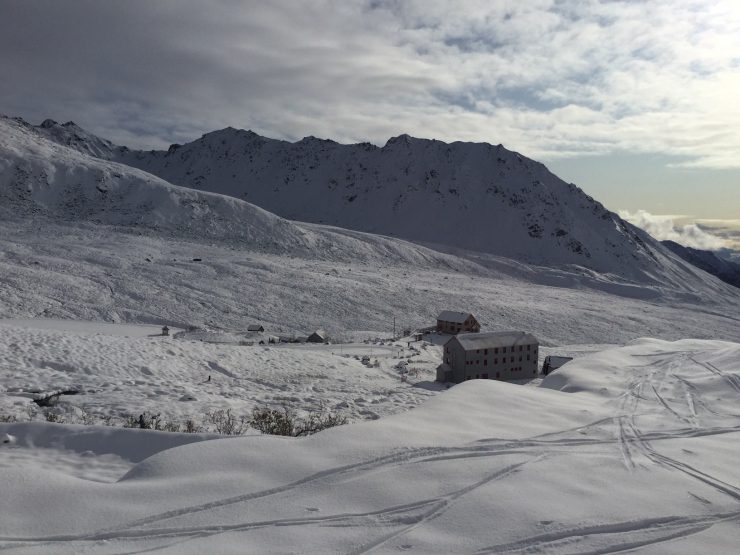 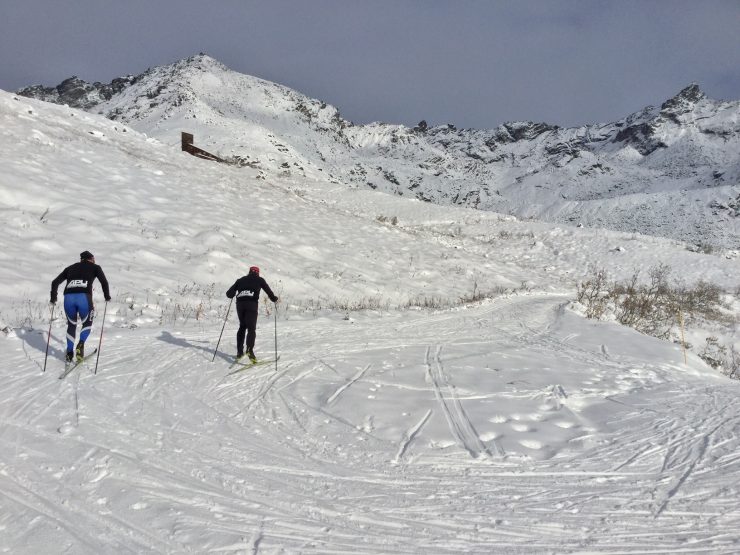 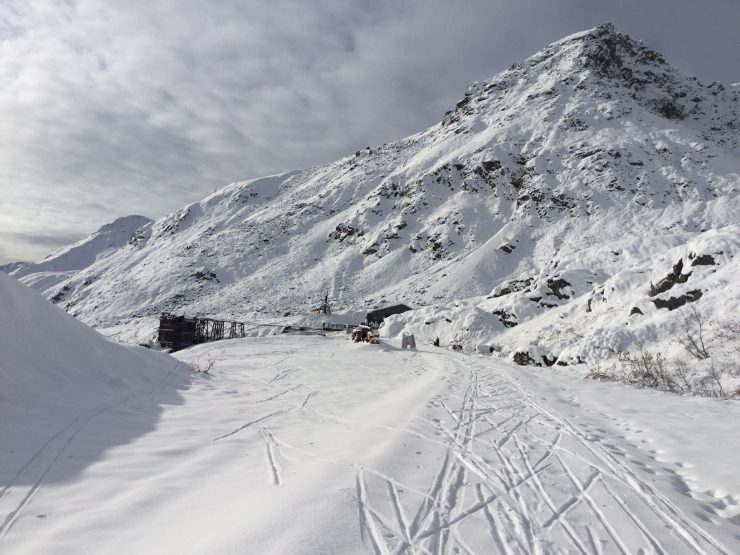 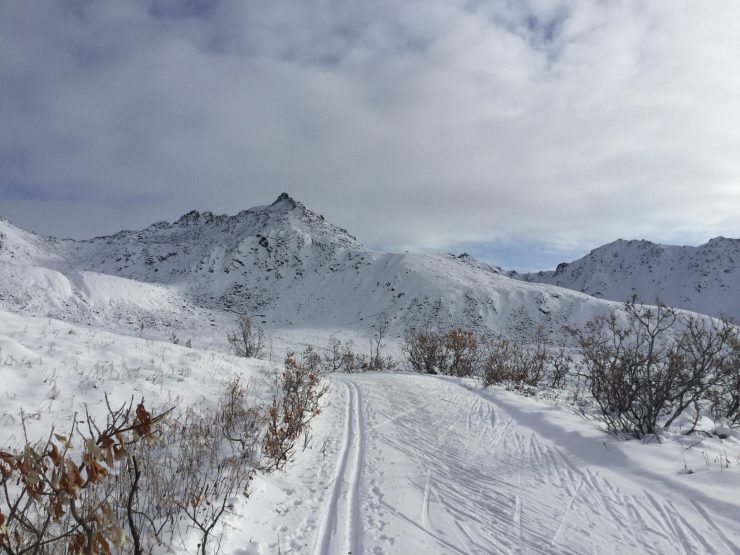 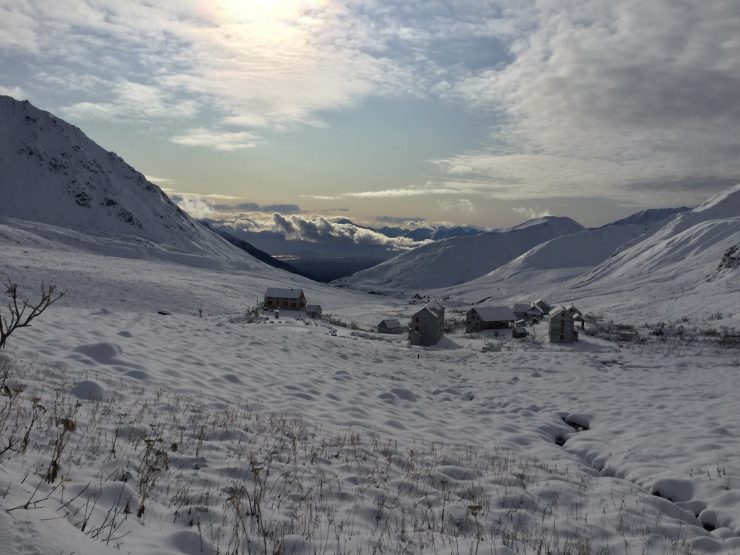 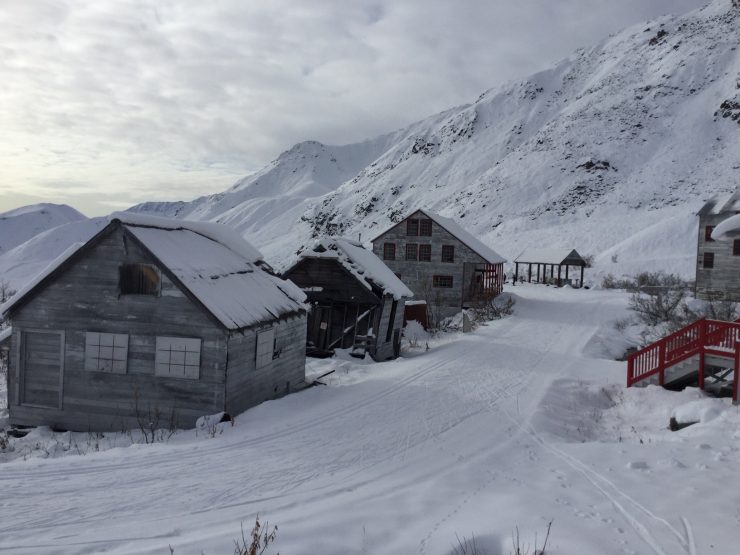 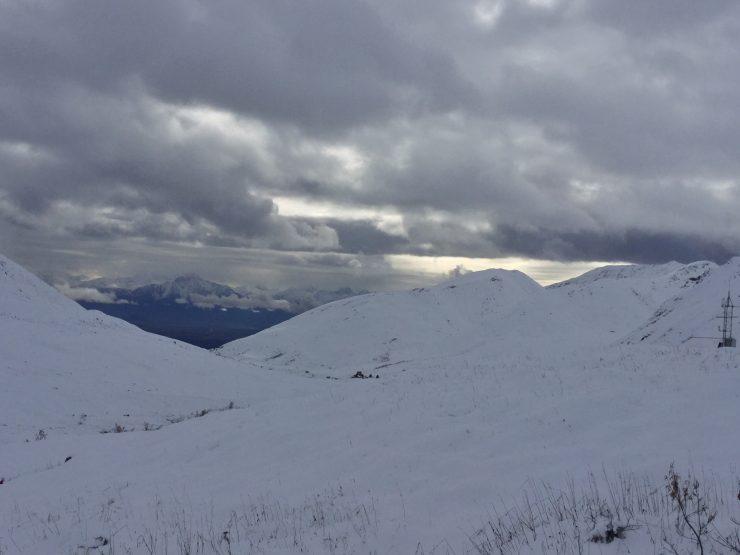