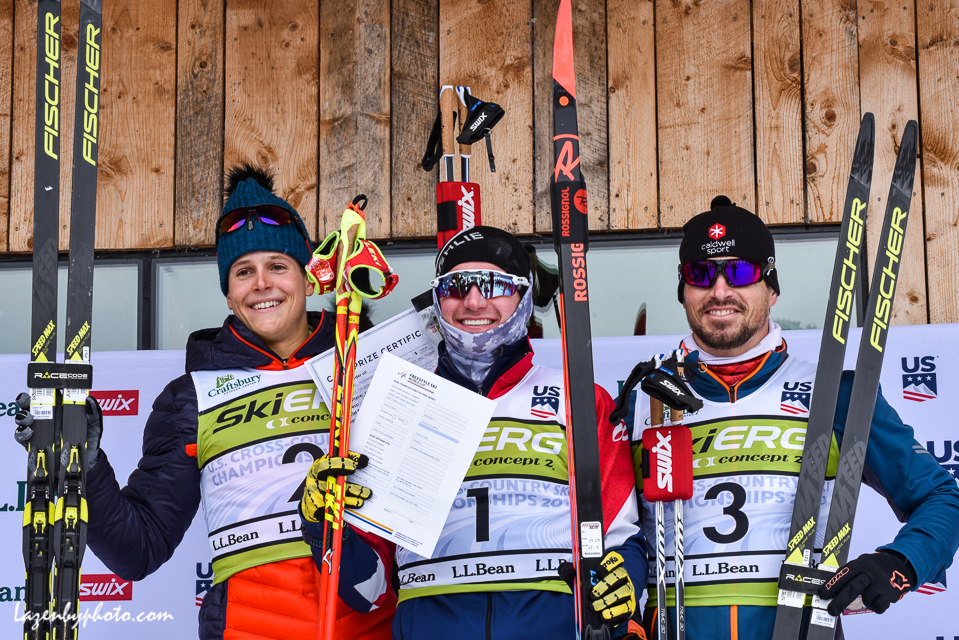 If there’s one skier on the U.S. domestic circuit who knows how to time his wins, it’s Kyle Bratrud. The 25 year old now has three U.S. Cross Country Championship titles to his name–his most recent coming on Thursday in the men’s 15-kilometer classic race in Craftsbury, Vt–with all of these wins simultaneously falling on Championship years.

In 2015, while still a senior at Northern Michigan University, he earned his first national title by winning the men’s 15 k freestyle in Houghton, Michigan. Thanks to that performance, he went on to qualify and compete at the World Champs held in Falun, Sweden later that season.

Two years later, as a member of Central Cross Country’s (CXC) Elite Team, he earned his second U.S. nationals victory, taking the men’s 15 k skate race on the Soldier Hollow trails in Midway, Utah. A little more than a month after that win, he competed at the  2017 World Champs in Lahti, Finland.

With starts for the 2019 World Champs in Seefeld, Austria on the line for competitors at this years U.S. nationals, Bratrud once again appears to be on the right track for qualifying after his win on Thursday.

The most notable changes for the Minnesota native this season has been his switch to the Stratton Mountain School and its SMS T2 group from CXC.

“It is always an upgrade when you train with Olympians, [an] Olympic Gold medalist,” Bratrud said during an in-person interview after the race, the Olympic Gold Medalist he referenced being Jessie Diggins, whose club team is SMS T2.

“It has been great and living out East, the roller skiing is great, the running is great, and working with coach Pat I think it was making a difference,” he added.

Patrick O’Brien has been the SMS T2 head coach for the past five years, working with the likes of Andy Newell, Sophie Caldwell, Simi Hamilton, and Jessie Diggins.

Both of Bratrud’s national titles prior to Thursday were in the freestyle discipline. His most recent victory in the classical discipline came a little more than four weeks ago in the Sovereign Lake NorAm 15 k classic race.

“SilverStar was my first  SuperTour classic victory so I am turning into a classic specialist these days,” Bratrud said.

Bratrud has a number of FIS regulated classic race wins. He won Thursday’s race in a time of 41:41.8, the next closest finisher being Adam Martin, who finished in a time of 42:12.8 for second place.

“I didn’t get a lot of splits on the first lap, but second and third laps I was getting consistent splits some were a little confusing,” Bratrud said. “But I was getting consistent splits that I was twenty seconds up. I know I had to keep the hammer down because that can disappear pretty quick on a course like this. It was certainly encouraging to get leader splits. I just tried to finish as hard as I could.” 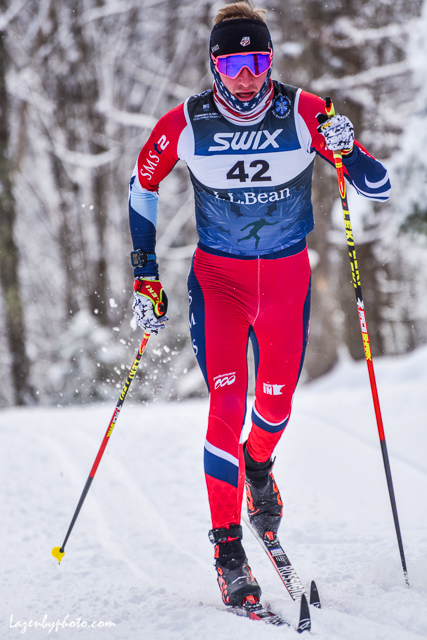 Kyle Bratrud racing to a win in the men’s 15-kilometer classic race on Thursday at U.S. nationals in Craftsbury, Vt. (Photo: John Lazenby)

For Martin, who trains with the Craftsbury Green Racing Project, the podium is his third at a Championships event. He placed third at the 2016 U.S. nationals 15 k classic in Houghton and second in last year’s Spring Series 50 k.

“The course is awesome I am psyched to be racing at home in Craftsbury,” the 24-year-old Martin told FasterSkier during an in-person interview. “I know how much work our groomers did, all the volunteers, to get snow on this course and put this race on. So I am really psyched to be here.”

The slower conditions on Thursday were no hindrance to the Wausau, Wisconsin native.

“We got three or four inches of snow overnight which whitened everything up and slowed things down a bit so I was super happy about that,” Martin said. “For me this course is pretty flat and fast for the first 3 k and then it is hard at the end. So I had to try pretty hard to go fast at the beginning.”

Rounding out the podium in third place on Thursday was four time Olympian, Kris Freeman. The 38 year old formally announced his retirement earlier this spring, though still poses a threat to anyone looking to land in the top three. He completed the 15 k in a time of 42:27.6 for third.

“Race went really well,” Freeman told FasterSkier during an in-person interview. “I felt good I had good energy and as always Caldwell Sport gave me great skis so it was fun.”

“I went out pretty conservatively and Akeo Maifeld-Carucci was my 15-second man and when I caught him I was definitely a little faster than him but not that much.” Freeman continued. “I decided to work with him for the second lap and that really saved a little bit for me in the last lap, I had something left in the legs. I moved up over the ranking over the last few K.”

Freeman has a total of six individual U.S. national wins to his name alone.