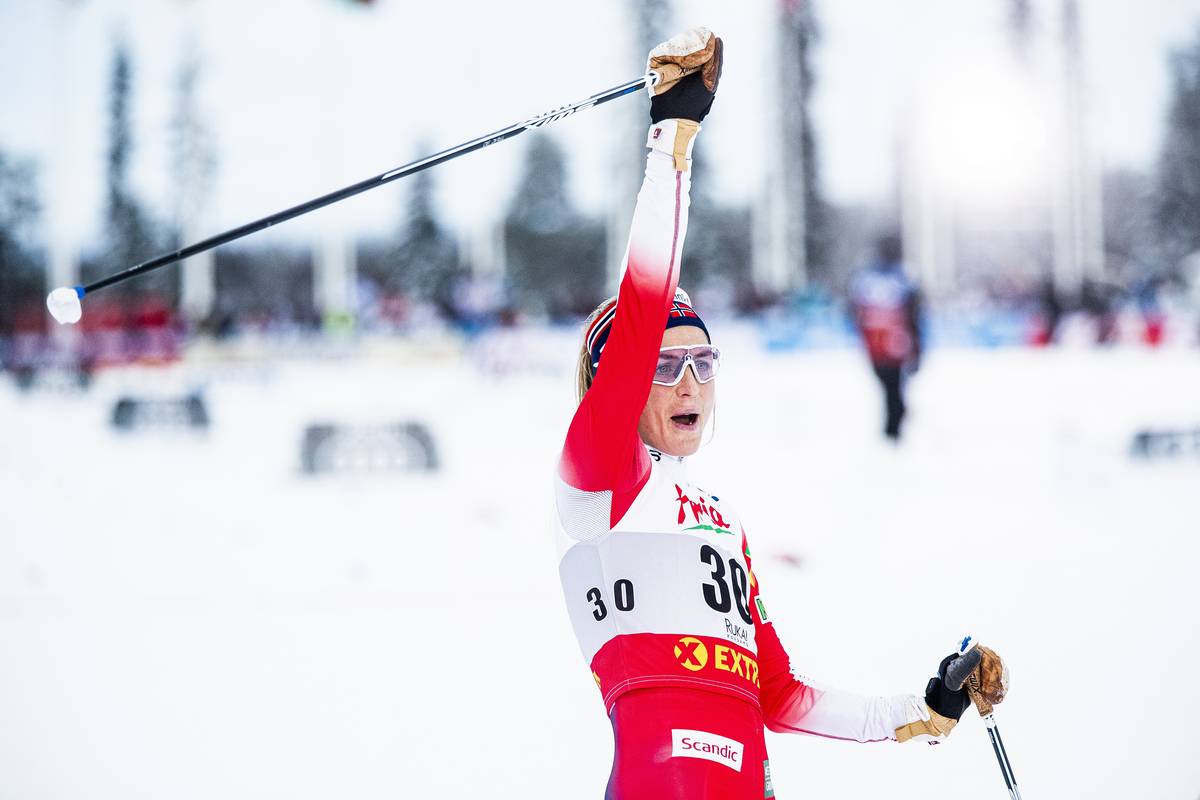 It was an elemental form of racing to open the distance events on the World Cup: the 10-kilometer interval start classic. No spoiler alert needed here. Norway’s Therese Johaug won in 26:47.5 minutes.

Johaug comes into the season having won the distance overall last year and steamrolled to two distance race victories Beitostølen, Norway last weekend. Those races were the opening Norwegian national races, but were stacked fields.

During another day with flurries, high humidity, and temps in the mid-teens, Johaug led at every checkpoint beyond the first at 1.2 k. Sweden’s U23 star Frida Karlsson took that time split by 0.8 seconds. At 3.1 k, Johaug had settled in and was already up by nearly ten seconds. Case closed.

Johaug will be heavily favored to take tomorrow’s 10 k freestyle pursuit. It would be Johaug’s third 3-Days Tour overall win. Finland’s Krista Pärmäkoski, who was caught by Johaug in the closing moments, placed second today 30.1 seconds back with Russia’s Natalia Nepryaeva in third, 44.4 seconds behind. 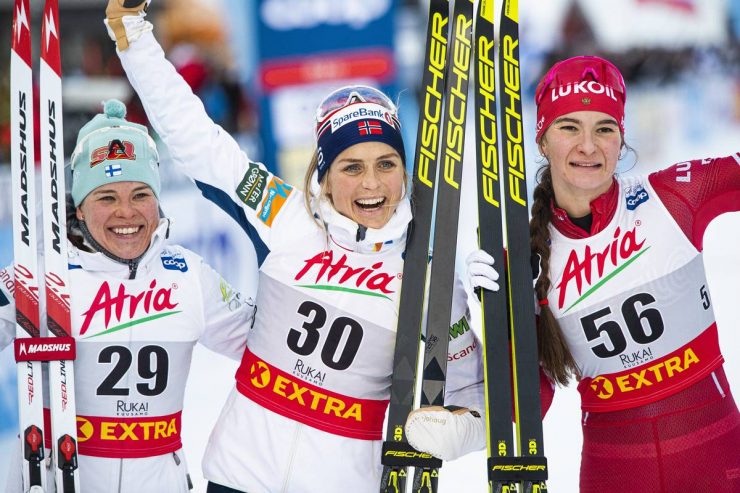 The U.S. Ski Team had three skiers in the top-13. Sadie Maubet Bjornsen, with yesterday’s third place in the classic sprint a confidence booster, set herself up for a fourth place today. She missed the podium by 1.3 seconds in an effort that saw her pacing build. After an initial 32nd fastest time at 1.2 k, when time differences are often tighter due to the limited distance covered, she pushed into the top four. Last year, Bjornsen placed 11th in this event, earning her first podium the following weekend in Lillehammer, Norway’s skate sprint where she was third overall. 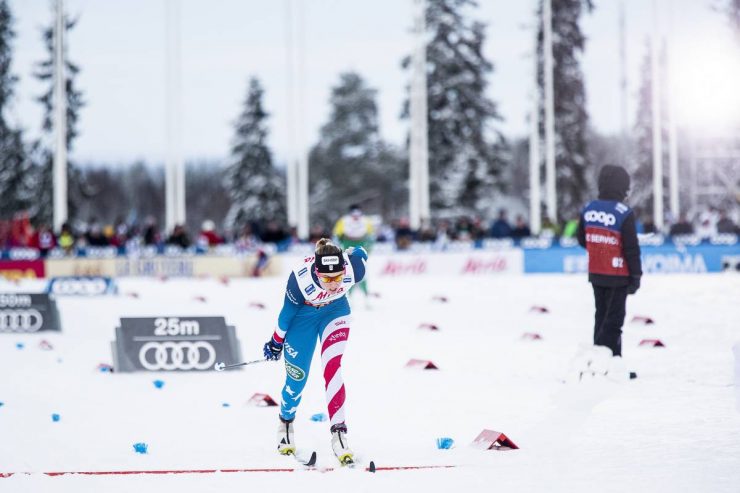 “Another dream day here in Ruka, just barely missing the podium by 1 second to finish 4th No regrets though, because I gave it my all today,” Maubet Bjornsen emailed to news outlets. “I have always loved the courses here in Finland, but it just feels like things came together for me. I managed to pace myself well, which was important after yesterday’s hard effort. On top of that, I once again had awesome skis out there to work with!”

With her third and fourth places in Ruka, Maubet Bjornsen now wears the yellow bib indicating she is leading the World Cup overall.

“I am the first American woman to have done so, which is so cool! The season is still young, so there is a lot to come, but over the years, I have worked very hard on my consistency among all the events in our sport,” she explained. “Last season I achieved the mark of winning a medal in all four disciplines we compete in, and now this is just one step further in excitement. I will save that yellow bib forever to remind myself that at one point, I was the most consistent in the world. Let’s hope I can meet it again!” 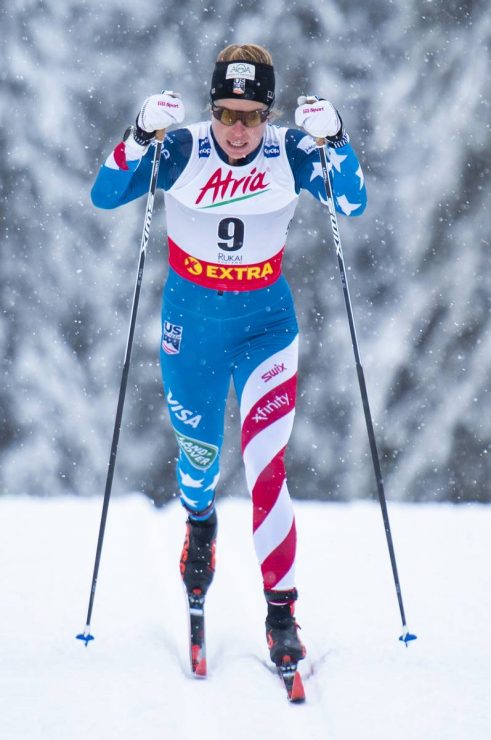 Rosie Brennan (USST) is no longer a surprise to push into the elite end of the standings. Today she matched a career-best sixth place on the World Cup. Her pacing and effort marked the time to beat for the lengthy list of racers finishing after her. Before the likes of Johaug, Pärmäkoski, and Nepryaeva, Brennan spent considerable time in the leader’s chair as she was an early starter in bib 9.

“I wasn’t feeling terribly confident in the warm up with the super steep hills here in Ruka so I had pretty low expectations,” Brenna emailed to several outlets. “I also have had a tendency to go out a little hot here and then slowly fade so my only plan was to start conservative and push the flats. I got to the first split, just over 1k into the race and I heard I was race leader…so much for a plan. After that, I just kept trying to make up time in all the small spots. It worked well and I was greeted at the finish with a long stint in the leader’s chair which is always a great way to start the season. I feel I’m in good shape but I wasn’t quite expecting that good of a result so I’m very excited and feel I have more to give in the coming weeks.”

Jessie Diggins (USST) skied to 13th place (+1:15.4). It’s barely worth mentioning she carries the weight of massive expectations up every hill. She placed sixth overall in the World Cup in 2019 and second in 2018. 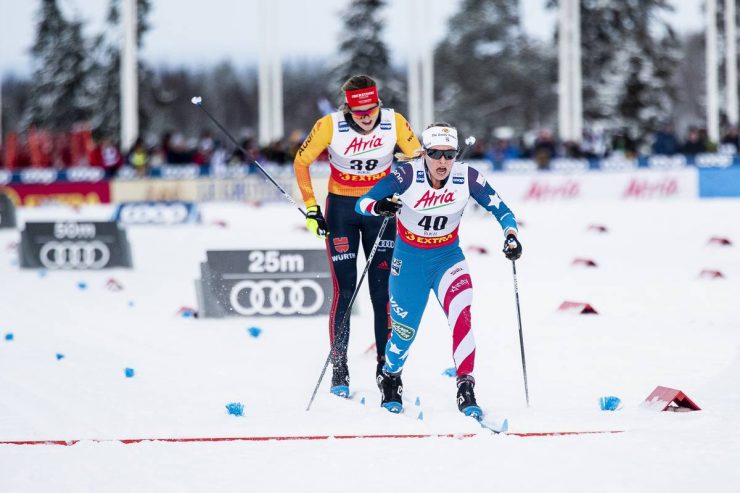 Racing concludes in Ruka tomorrow with a 10 k skate pursuit. 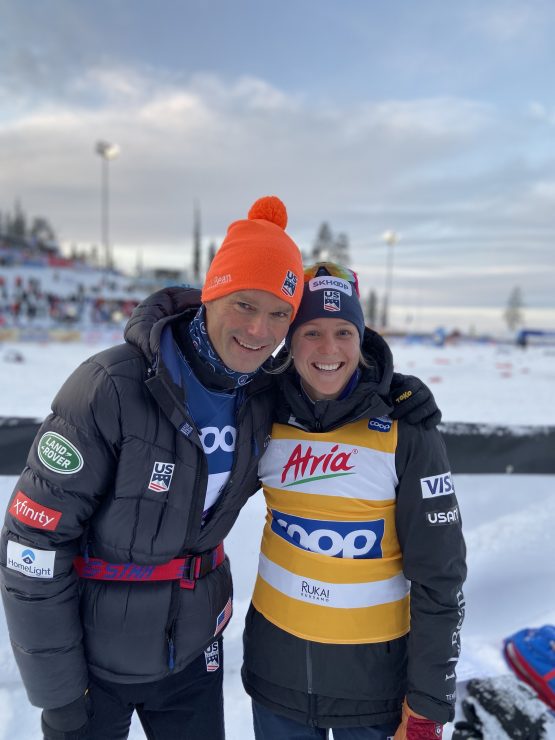 Sadie Maubet Bjornsen in her yellow World Cup leader’s bib and her new wax tech, Per Erik Bjornstad of Norway.