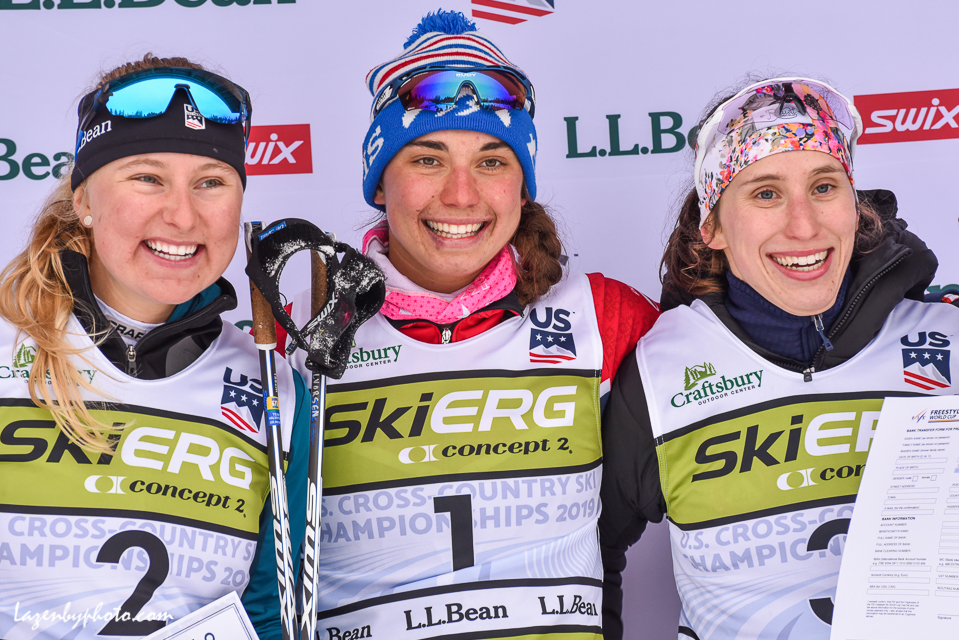 Julia Kern’s young season has been rife with success. Two SuperTour sprint wins, and a second place in this Craftsbury nationals in the classic sprint are among the twenty-one-year-old Kern’s peaks since 2018/2019 elite level domestic racing began in West Yellowstone days after Thanksgiving.

As much as her season so far has been without pitfalls, her pathway to the women’s 1.5-kilometer finals was, for Kern, a test of her patience and will. As the second fastest qualifier, Kern was a marked skier.

In the fourth quarterfinal, she placed second behind Canada’s Katherine Stewart-Jones.

“I learned that a lot happens the second half of a race,” Kern told FasterSkier in Craftsbury about how her strategy evolved while she advanced. “I was in sixth, dropped at the top of the hill [in the final] and then I just got my mind back into it. And put it all out and I realized I had the finishing speed. I just need to be able to hang on and then get into that zone of just going for it in the finish. I think there is a lot in the last quarter of the race to be had.”

“The final was really hard,” said Kern. “I think everyone was really tired from a fast and hard week of racing. Things really spread out on the uphill and then it was just kind of a fight for what you have left. And on the last hill I just got into a zone and just put my head down and hammered.” 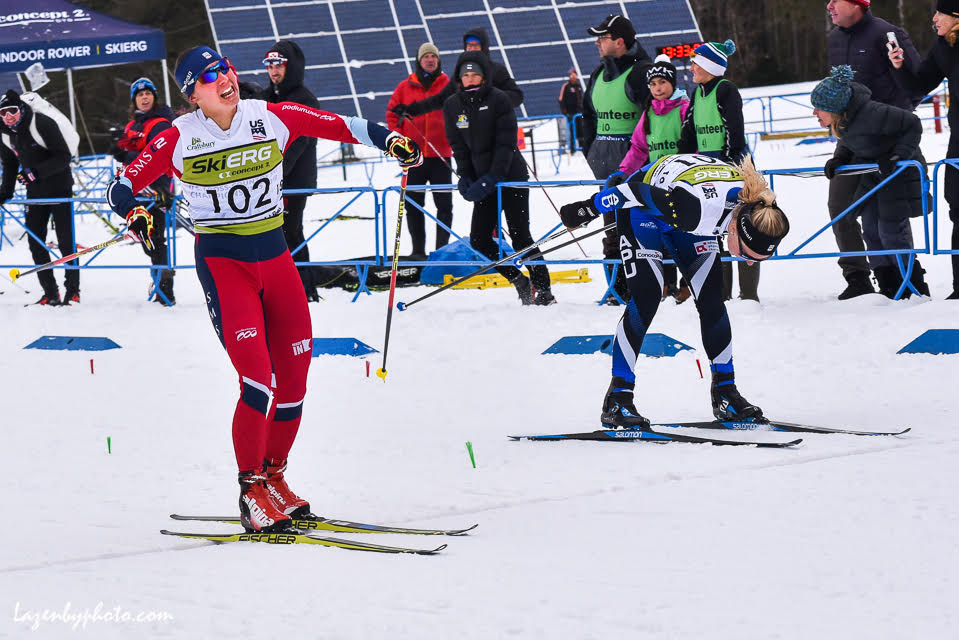 Like in Thursday’s classic sprint when the two were in a photo finish, Kern and Halvorsen were side by side coming into the line during the final.

“I think I had been smiling a little bit because it is so fun to go head to head,” said Kern. “I was almost laughing in my head and was like ‘oh, is this going to come down to another lunge?’ that would be pretty funny. I think we are going to make each other faster. Competition is the best to make you better and it makes it really fun to see us both on top of our game and duking it out head to head at the finish.”

It was Kern’s first U.S national championship. She secured her first career U.S. nationals podium in the classic sprint last Thursday, in which she placed second to the winner Ida Sargent (CGRP/USST). Halvorsen, in that race, place third also for her first career podium at nationals.

“I have been learning a lot from Julia actually in quite a few of these races,” Halvorsen said when asked about her thoughts on the day. “I had a good quarters and semis and I was able to take control and feel confident. And in the final I tried to take the lead and tried to win it but Julia came in from behind and she was stronger. She definitely pushes me and she took it today.”

For Phinney, the day brought her first career podium at a nationals.

“In the quarterfinal I was hoping to just rest as much as possible,” Phinney said about the start of her heats. “I was in the fifth quarter and then the second semi, so I had the disadvantage of less rest throughout the day. I had fallen in the classic sprint so it was a little dicey in the quarter and I took the lead at the climb just to stay safe. I think the biggest thing I learned was just that I was skiing with good energy and was felt really good in the second half of the course so that gave me a lot of confidence going into the final. But I think anything could have worked as long as you skied safe. It was a long enough course so that there were some opportunities to either do really well or blow up.”

In the final, Patterson made the initial move to break the group and gain an advantage.

“So it was a little exciting,” Phinney said of Patterson’s move. “I worked really hard to get back up to her on the big climb. And then I maybe burned myself a little bit and wasn’t able to hold the finishing pace of Hannah and Julia when they came around. It is my first national podium. So I am happy with that. But I would have loved to fight for that win.”