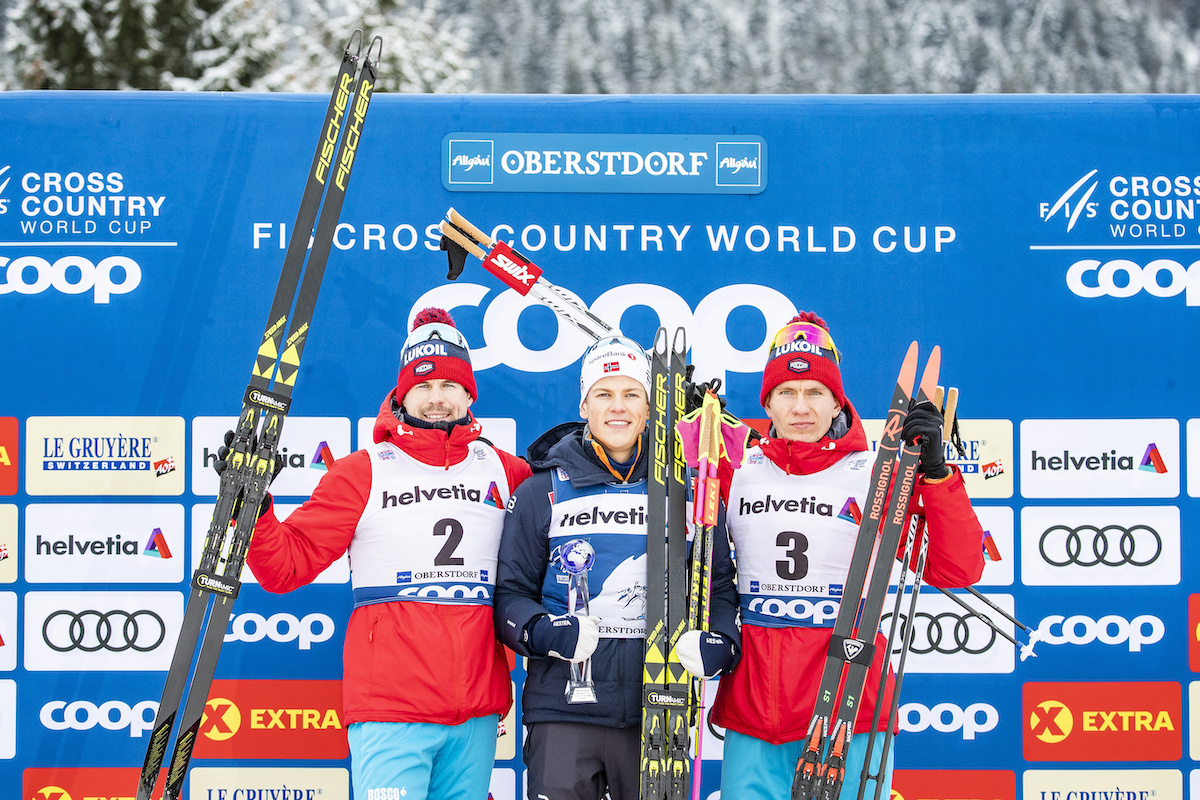 The crux of today’s Tour de Ski (TdS) Stage 5 15-kilometer freestyle pursuit came down to a simple yet taxing pulse of energy. That move occurred well into a race as the day’s main narrative was established by the two charging off-the-front.

Norway’s Johannes Høsflot Klæbo began the pursuit in the blue bib as the Tour’s overall leader. Under overcast skies, free from the snowstorm that pummeled Stage 4, Klæbo started 15 seconds ahead of the Tour’s second overall skier, Russia’s Sergey Ustiugov. With fewer than 2 k clicked off, the Klæbo-Ustiugov link up had occurred. Rather than get bogged down in a slowed down cat and mouse tactic, the two worked together, most often with Ustiugov pulling Klæbo along, to gain time on the chasing field.

The closest any skier came to the two leaders was Russia’s Alexander Bolshunov — he started in bib 3, 46 seconds back. The twenty-two-year-old Bolshunov skied alone for the race, never making ground on the two skiers ahead and keeping an approximate 30-second buffer from those trying to suck up from behind.

Over six laps of the 2.5 k course, Klæbo and Ustiugov kept the pacing just high enough to ensure Bolshunov could not gap-up and just “cat and mouse” enough as to test one other here and there with bursts of speed and slow tempo dances of pacing. 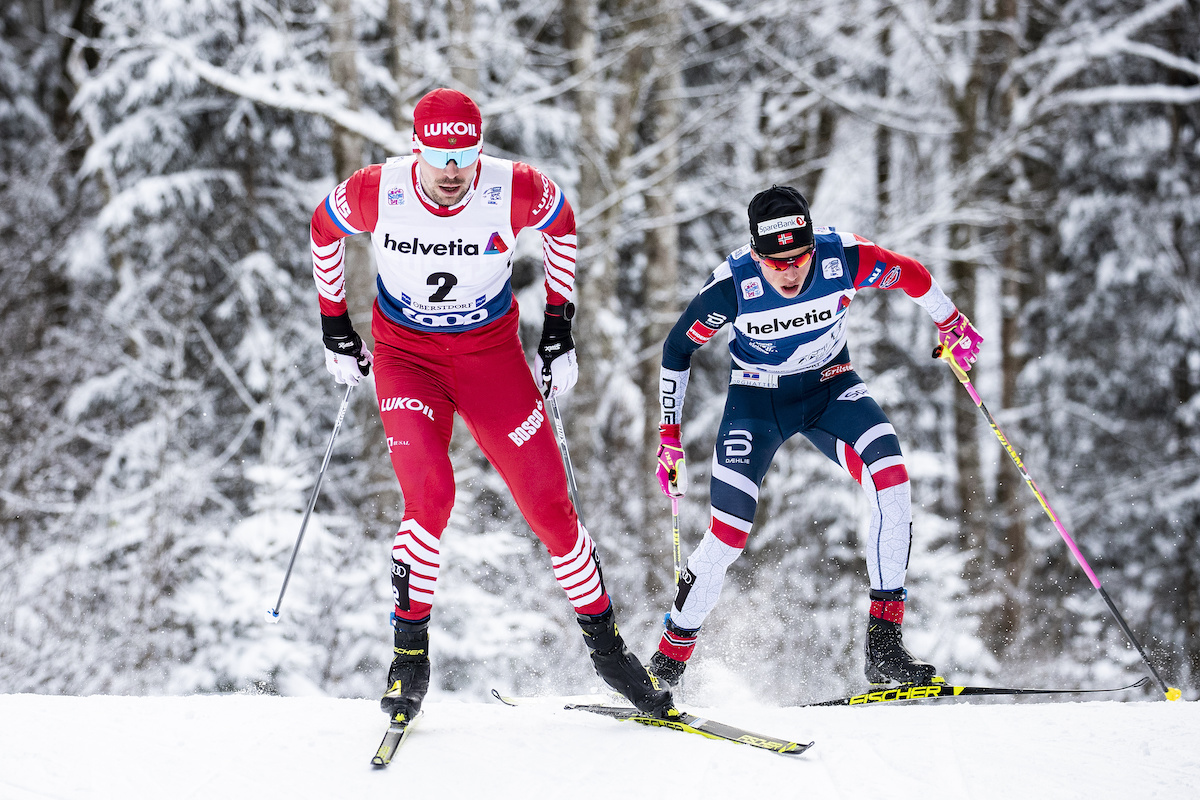 Nothing shook out for either skier until Klæbo shifted into a higher gear over the top of the final hill. The move was a burst, but didn’t initially look like anything decisive; just a classic work over the hilltop effort every junior skier has burned into their synapses by a vocal coach.

Over the top, Klæbo simply looked like he would carry slightly more speed into the descent then Ustiugov. The gap was five meters, sometimes slightly more, but nothing insurmountable for the Russian as the finish line approached.

Klæbo put in an effort in the final 100 meters –  Ustiugov V2’d in an attempt to close down on the Norwegian while Klæbo free-skated. There was time for Klæbo to turn around and give Ustiugov a stare before sliding across the line, taking the win in 35:07.5 minutes.

It was Klæbo’s third stage win of the TdS after winning the Stage 1 and Stage 3 skate sprints. 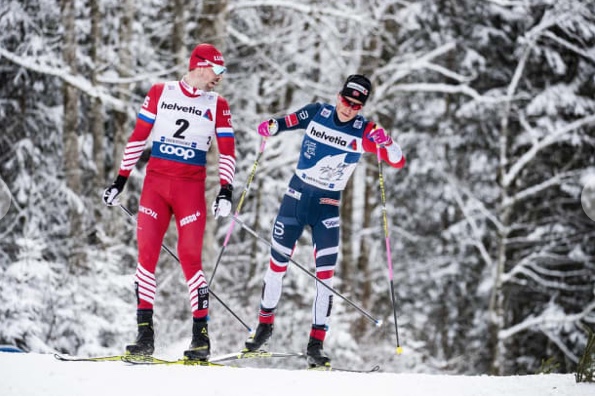 “It was really tough,” Klæbo told the International Ski Federation (FIS) after the race. “Sergey is in very good shape and I think we were going very fast all the way. And in the third lap, I was really tired, but I think he was too. I am very proud to be able to win 15 k in skate, it is my first victory there so I am very happy. Both of us were so stiff in our legs, it was really hard. So we tried, and we stopped again, and we tried some more. It was really tough on the last uphill there. A really cool race and a nice fight between me and Sergey.”

According to FIS, the 15 k skate has been a non-podium event for Klæbo. On the World Cup, his best 15 k skate placing was a 10th place during the 2017 season in Toblach, Italy. That 15 k skate was an interval start format. (Klæbo also placed 12th in this season’s TdS Stage 2 15 k skate individual start race.) 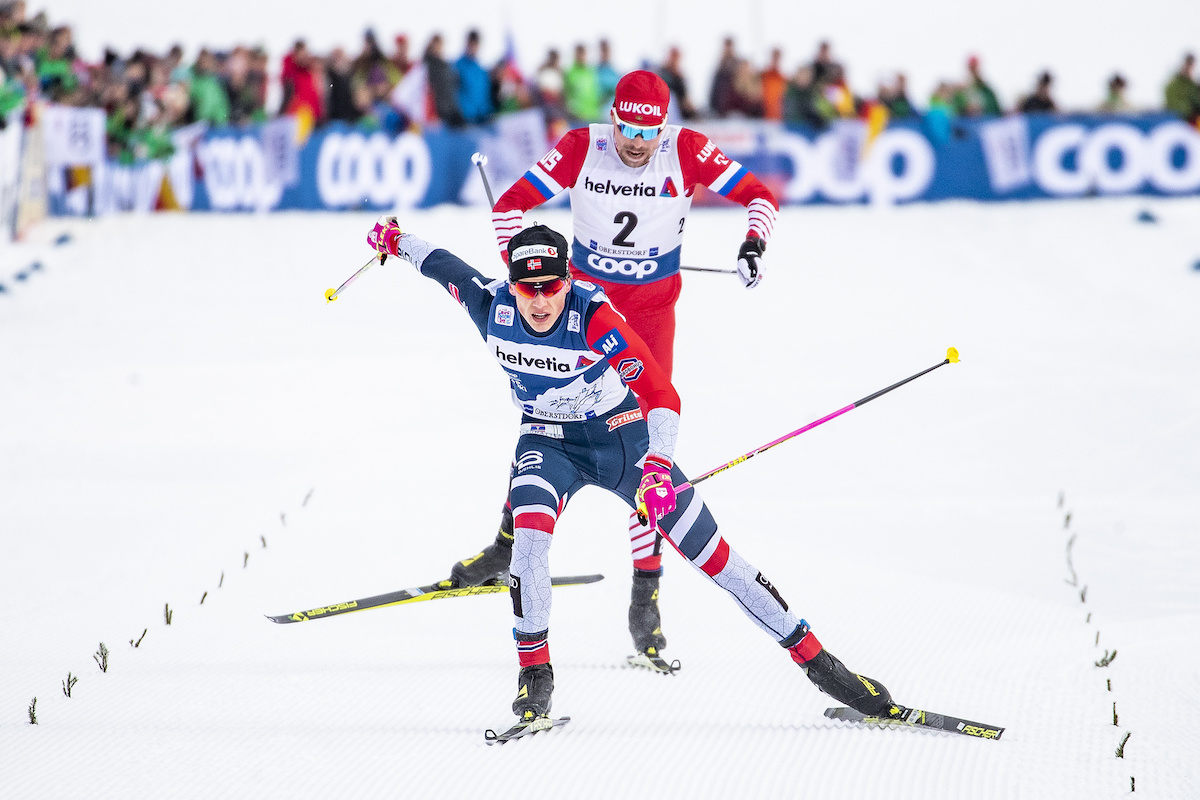 In his first career TdS, Klæbo will be heading into Saturday’s Stage 6 15 k classic mass start with a 5.4 second lead over Ustiugov, who sits second in the TdS overall standings. The final stage of the TdS will be Sunday’s traditional Alpe Cermis climb in Val di Fiemme, Italy.

Bolshunov remains third in the overall, yet he moves farther back in time to Klæbo after today’s stage – 1:18.2 minutes now separate him from the Norwegian.

By 11.9 k, Harvey had lost contact with the Cologna/Sundby group. Harvey ended his pursuit in 22nd, 3:11.6 minutes back. 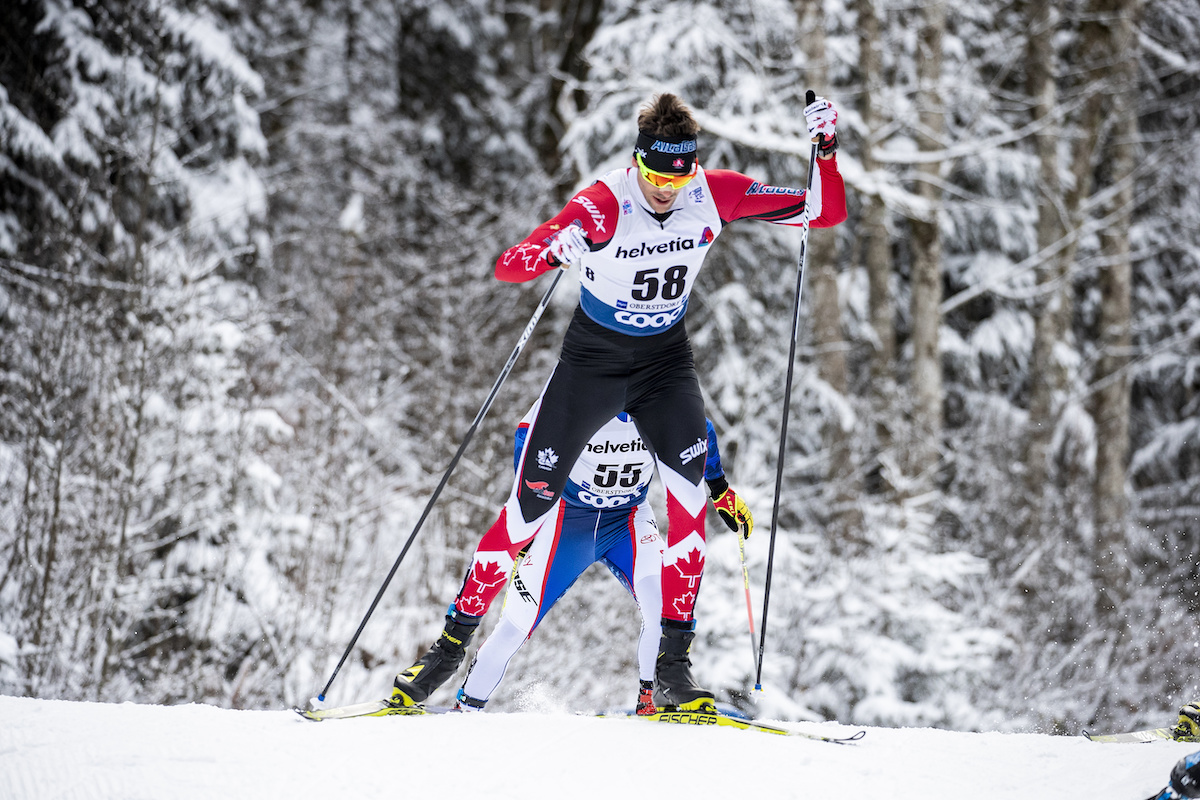