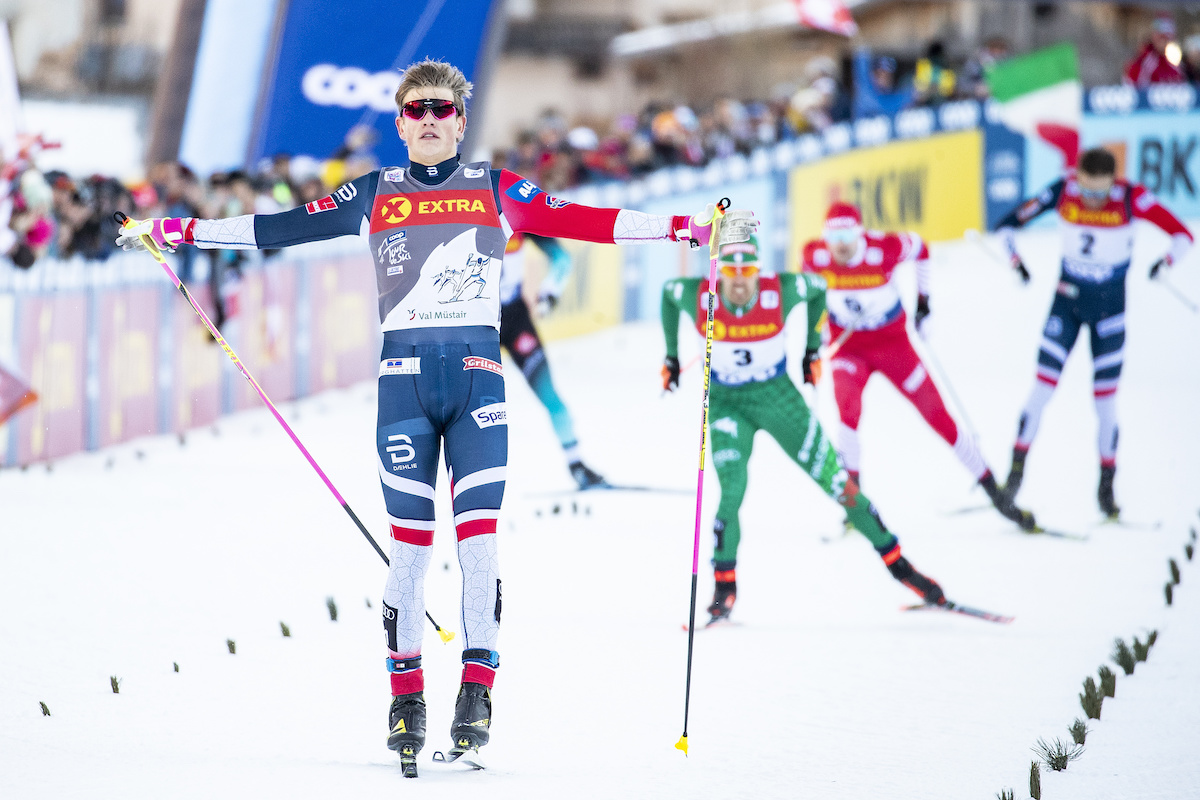 Today’s 1.4-kilometer freestyle sprint course in Val Mustair, Switzerland was not lacking in short, steep climbs, fast, tight corners and rollers that knocked even the best skiers around. Going into Tuesday’s races, Johannes Høsflot Klæbo of Norway was third overall in the Tour de Ski (TdS).

In the first two stages of the TdS, Klæbo took the first stage’s sprint win and placed 12th in Stage 2’s 15 k skate. After his racing today, Klæbo moved from third overall in the TdS, to first. He leads the overall by 12.0 seconds over second place skier from Russia, Sergey Ustiugov.

Klæbo was the fastest qualifier in today’s race with a time of 3:04.69 minutes before going on to win the finals. This is the first time a male has won back-to-back sprint stages in the Tour de Ski.

Klæbo won both his quarter and semi-finals and won the final in a time of 3:03.78. In all three races, he led the steep punchy climb on the second lap and created sizeable gaps by the time he crested the hill and glided into the downhill. Italy’s Federico Pellegrino challenged Klæbo in the finishing stretch of his semi and the final. But in both races, Klæbo prevailed. This is Klæbo’s tenth sprint victory since the beginning of last season.

“I’m very glad [Sergey] Ustiugov did this fast speed at the second lap and, I was just trying to push all in and I’m really happy to be in first.”  Klæbo told the International Ski Federation (FIS) after the race. “Now it’s a little bit of rest and then you start over tomorrow. So we try again tomorrow. We’ll see.”

Pellegrino finished today’s sprint in second place, 2.35 seconds behind Klæbo. Pellegrino qualified third, he won his quarterfinal and came in second in his semi-final to Klæbo by 0.14 seconds. After today’s race — the fifth sprint of the World Cup season — Pellegrino sits second overall in the World Cup sprint standings and seventh overall(+1:19.4) in the TdS.

Sergey Ustiugov of Russia finished in third (+3.07) in the Stage 3 sprint. This is Ustiugov’s second podium of the Tour de Ski, he won Sunday’s 15 k skate race 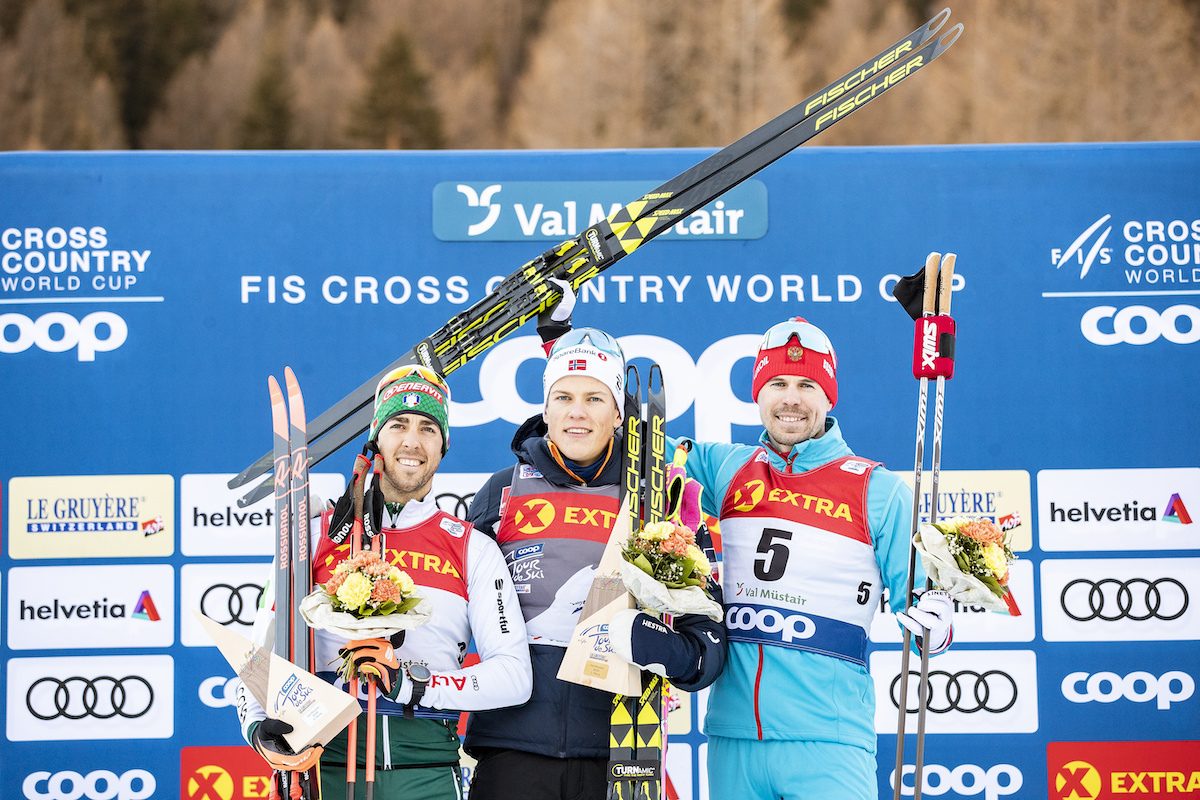 Simi Hamilton of the U.S. Ski Team (USST) was the only North American to qualify for the heats in today’s race. Hamilton qualified in sixth (+4.30) and ended his day 13th overall. Hamilton finished third in his quarterfinal, .68 seconds behind winner Pellegrino, and did not advance.

“There was a big headwind, so I focused on settling in and drafting on the first lap and I felt like I was in a good place,” Hamilton said of his quarterfinal matchup. “But Pellegrino and Chanavat put a surge on and I couldn’t match it. I’m a little disappointed, it’s a little bittersweet. I felt good, but it was a bummer not to move on. I’m psyched for Jessie [Diggins] and Sophie [Caldwell], the team’s energy is great right now. It was another fun day of ski racing!” 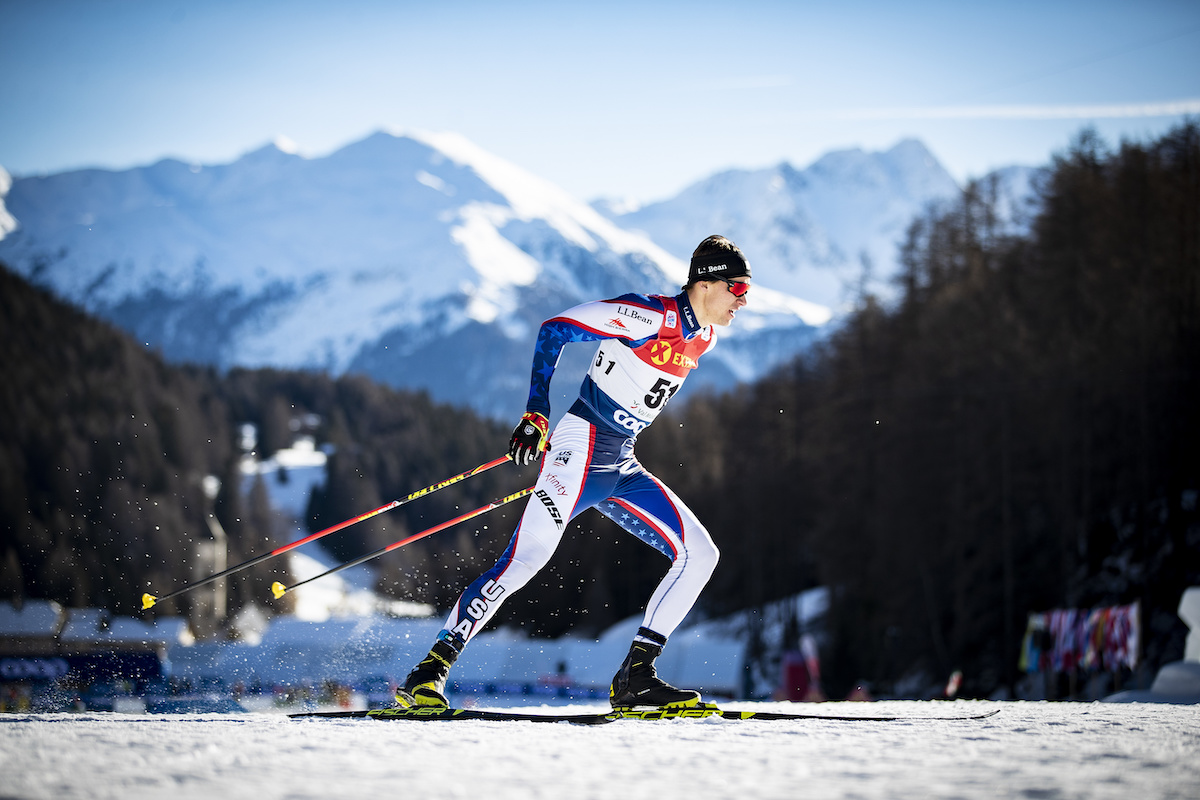 Kevin Bolger of the U.S. Ski Team during his qualifier, Stage 3 of the Tour de Ski. (Photo: Fischer/Nordic Focus)