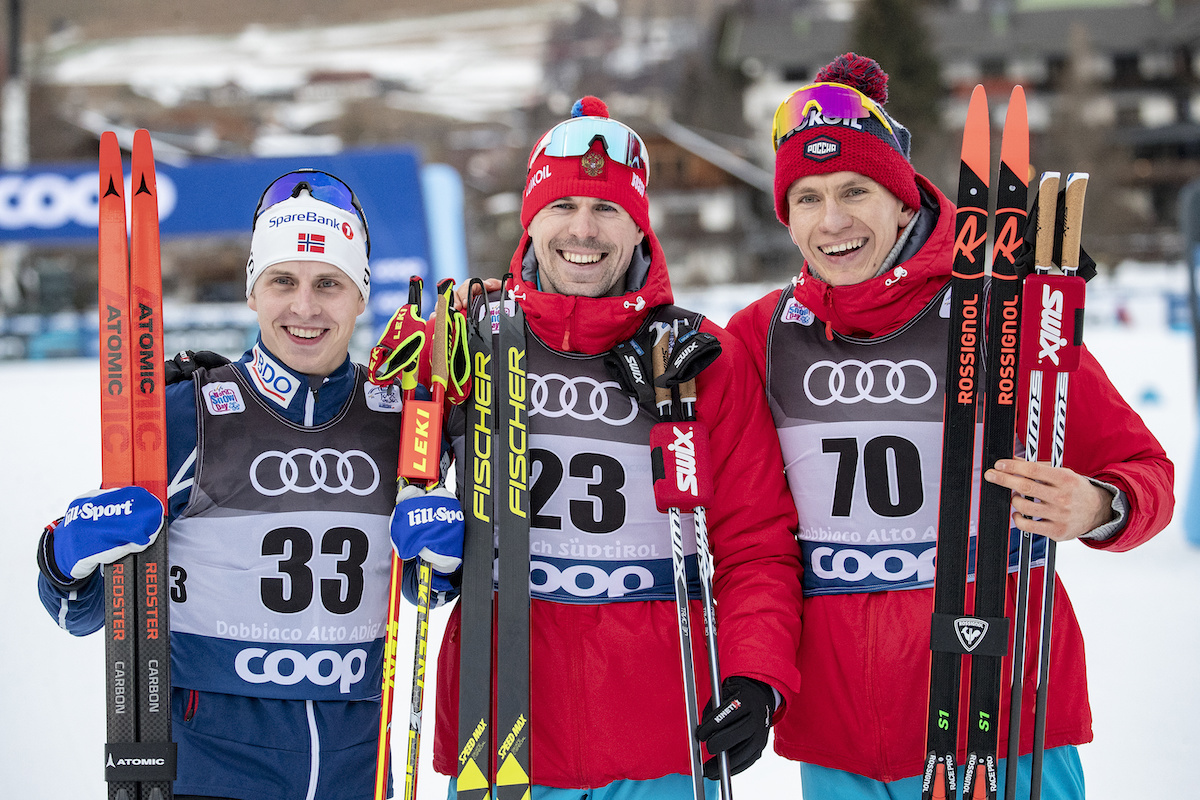 The men’s podium from the second stage of the 2018/209 Tour de Ski. From left to right, Simen Hegstad Krüger of Norway was third, Sergey Ustiugov from Russia first, and Alexander Bolshunov, also from Russia, in second. (Photo: Fischer/Nordic Focus)

For the World Cup seasons 2016-2018, along with Norwegians like Martin Johnsrud Sundby and Johannes Høsflot Klæbo, the name of Russian Sergey Ustiugov was a regular at or near the top of the results sheet. In 2016 Ustiugov marked 11 World Cup podiums. He had another 11 in 2017, and five last season along with the Tour de Ski (TdS) overall title.

Ustiugov didn’t exactly suffer a shattering fall from grace. His five podiums last season the result of an abrupt cessation from World Cup racing after the 15 k skate mass start in Seefeld, Austria last Jan. 28. He placed eighth in that race.

Ustiugov simply disappeared from the World Cup scene as he was associated with doping in Russia. There one day, gone the next, only to be replaced in the Russian pecking order by an upstart Alexander Bolshunov.

Although considered a pre-Olympic medal favorite, the International Olympic Committee (IOC) included Ustiugov’s name on a list of athletes banned from the Games.

The Russian Olympic Committee (ROC) stated in response that Ustiugov had not been involved with doping. 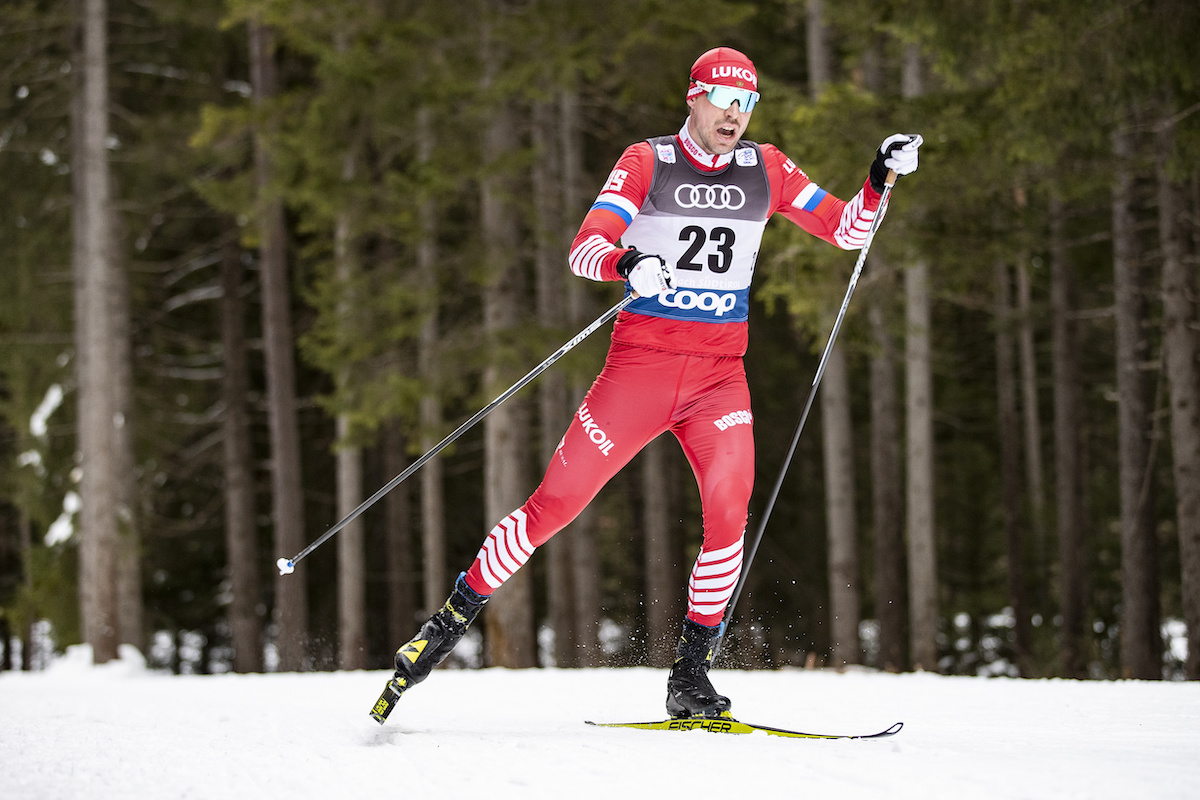 It has been a perfect calendar year to the day since Ustiugov last won a World Cup event. He won today’s Stage 2 of the TdS, a 15-kilometer skate interval start in a winning time of 30:34.1 minutes. To further highlight his rise from the ashes, Ustiugov had primed his World-Cup-sized engine in a single World Cup race this season prior to yesterday’s TdS start. He placed 25th in the Davos, Switzerland 15 k skate.

At the 11.75 k time check on Sunday in Toblach, on an uphill where many skiers were forced into a steady V1, there was Ustiugov with a tick-tock metronome-timed massive V2.

At that time check, Ustiugov had served notice that his splits would be the marks to beat —   he notched the fastest split at 11.75 k. Norway’s Simen Hegstad Krüger had the second fastest split at 9.7 seconds back. (Krüger, although overshadowed by his Norwegian teammates, was the 2018 Olympic Gold medalist in the 30 k skiathlon and placed second in the Olympic 15 k skate.)

Rewinding a bit to today’s 5 k time check, the Russian marked the fastest splits at every checkpoint onward. His leads were never mathematically insurmountable, but certainly, by the powerful style with which Ustiugov skied on Sunday, his time gaps would not diminish by the finish. Ustiugov settled into the leader’s chair as the later starters all failed to knock him off the TdS 15 k skate throne.

Krüger placed second in the race, 12.2 seconds back, while Russian teammate, Alexander Bolshunov was third (+21.9). Another Russian, Andrey Melnichenko was fourth (+27.4).

This is the TdS. Seven stages long, where each k, each stage, leads to the next day’s race. Two stages in, the top-10 skiers in the overall are separated by 59.1 seconds.

“I think it is a step in the right direction today. The result is good, the body is feeling decent too and that is positive for a distance race,” said Harvey according to a Cross Country Canada press release. “I was looking for a bit better, but I am really happy with that last lap. I emptied the tank and gained about six spots so that was good. I need to make sure I’m a bit further up the ranking (heading into the final lap) so I’m able to fight for the top-five or 10.

“I was hoping to be a bit further up the rankings right now, but that’s where I’m at and it is trending in the right direction,” added Harvey. “Recovery is key in a stage event. I just have to make sure I continue to eat well, change the clothes quickly, get therapy and massage, go for light jogs at night and flush the legs. There is nothing special that is needed, but it is important to do all the little things right.”