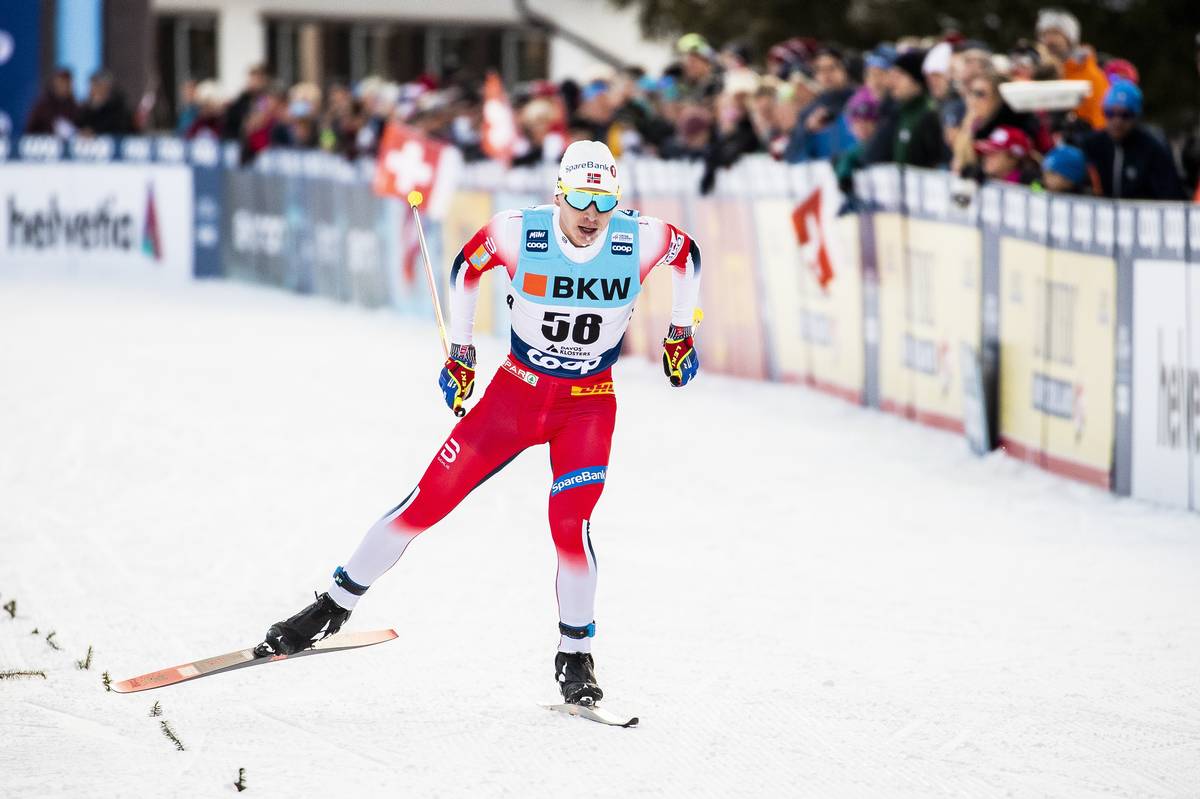 In contrast to yesterday’s open valley sprints, Sunday’s 15-kilometer interval start freestyle was tucked and nestled on the shady side of the valley. Firm snow and less than optimal oxygen concentrations greeted athletes. Davos sits at just over five thousand feet in altitude.

As far as the race narrative, so much for fairy tales in lovely Davos. Dario Cologna, the Swiss ski star sat for a time in the fur-lined leader’s chair. Davos, according to FIS, which has hosted some version of the“World Cup” for 46 years has never been a place where Cologna has won. Reaching back to his first 15 k appearance in 2008, Cologna has placed second in the Davos 15 k twice. On Sunday he was third. 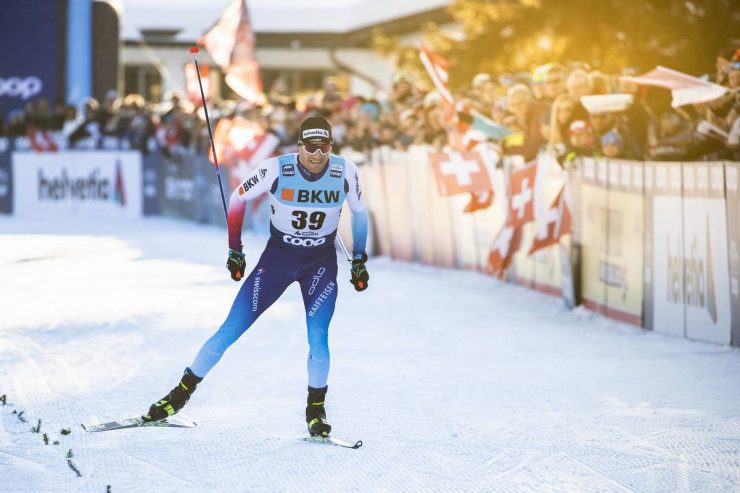 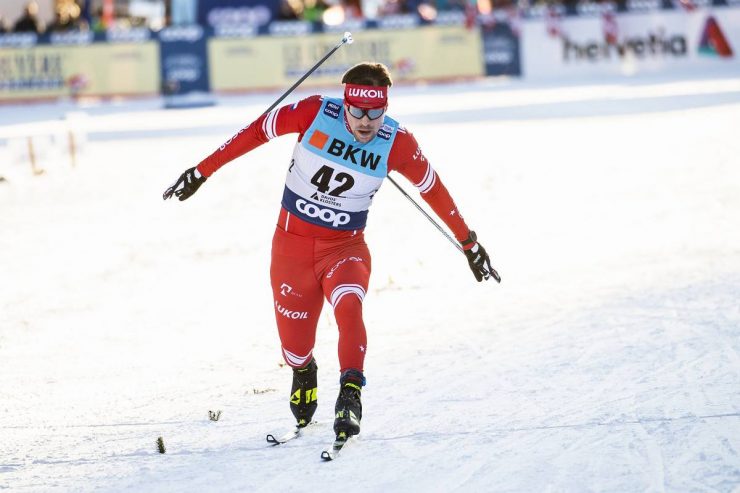 Sergey Ustiugov of Russia toes the line as he places second in the 2019 Davos, Switzerland 15 k skate. (Photo: NordicFocus)

Russia’s Sergey Ustiugov bumped Cologna from the leader’s chair by 1.0 seconds. The Russian was ultimately displaced by Norway’s Simen Hegstad Krüger. Krüger won in 33:59.3 for his second career World Cup victory. Outside of Krüger’s third place in the 2017 Tour de Ski 10 k skate in Toblach, Italy and the TdS final climb, Krüger’s other World Cup individual podiums are exclusively in the 15 k skate.

“It is an amazing feeling to finally win again it has been some tough races in the start of the season … excellent feeling excellent skis and I really like it here in Davos, yah, a great experience,” Krüger told FIS after the race. “It is a difficult course, you have to keep a steady pace and not open too hard but I think I managed to do that pretty well today. Really satisfied.”

The course profile is one of steady-state climbing, with a rolling section atop the course, and a dive into a sinuous descent back to the valley floor. With the men racing three laps on this 5 k loop, proper pacing is critical.

At 10k, after his second time up and down the course, Krüger was 14.1 seconds up. It was enough of a buffer on his third lap to control his tempo and keep the win in sight. Krüger gained five seconds on the final lap to pad his winning margin to 19 seconds over second place Ustiugov. Cologna was 20 seconds behind in third. 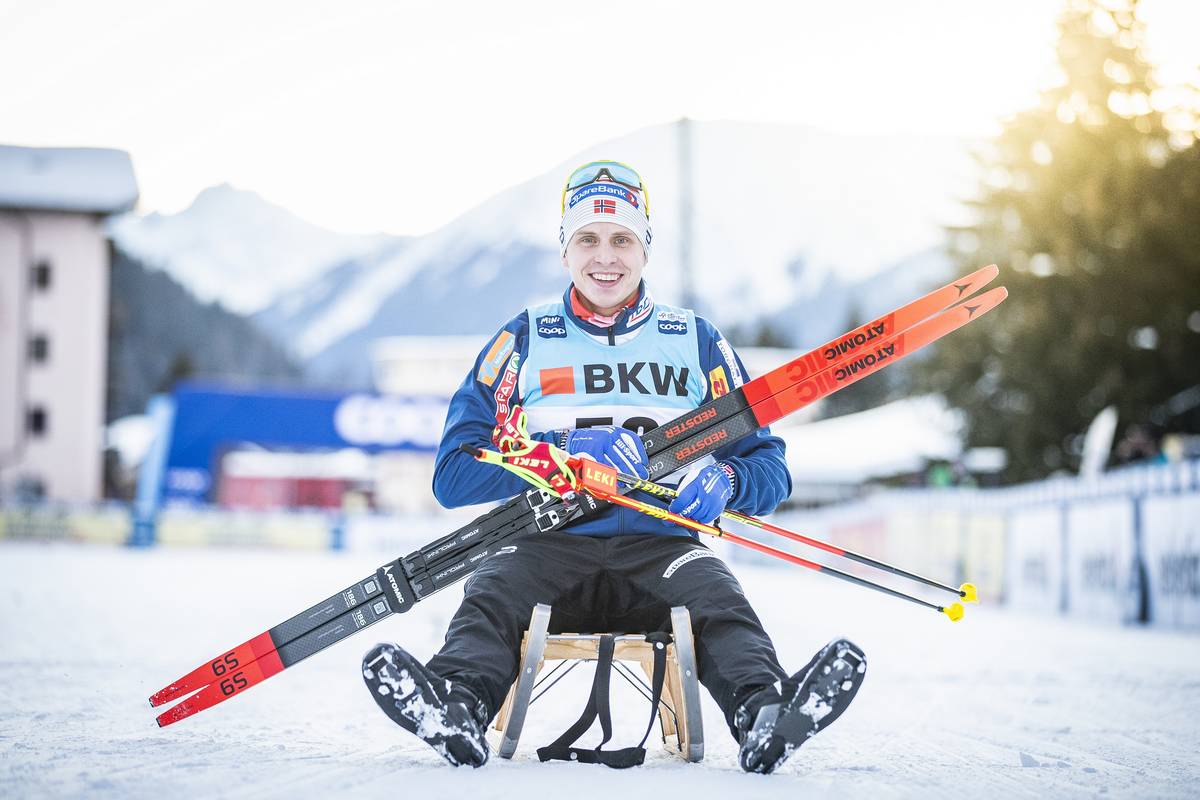 Bratrud began his day on the conservative side of pacing, sitting in 65th after 5 k. By 10k, he bumped up to 46th. Finishing in 38th, Bratrud was a bit over ten seconds outside the points. 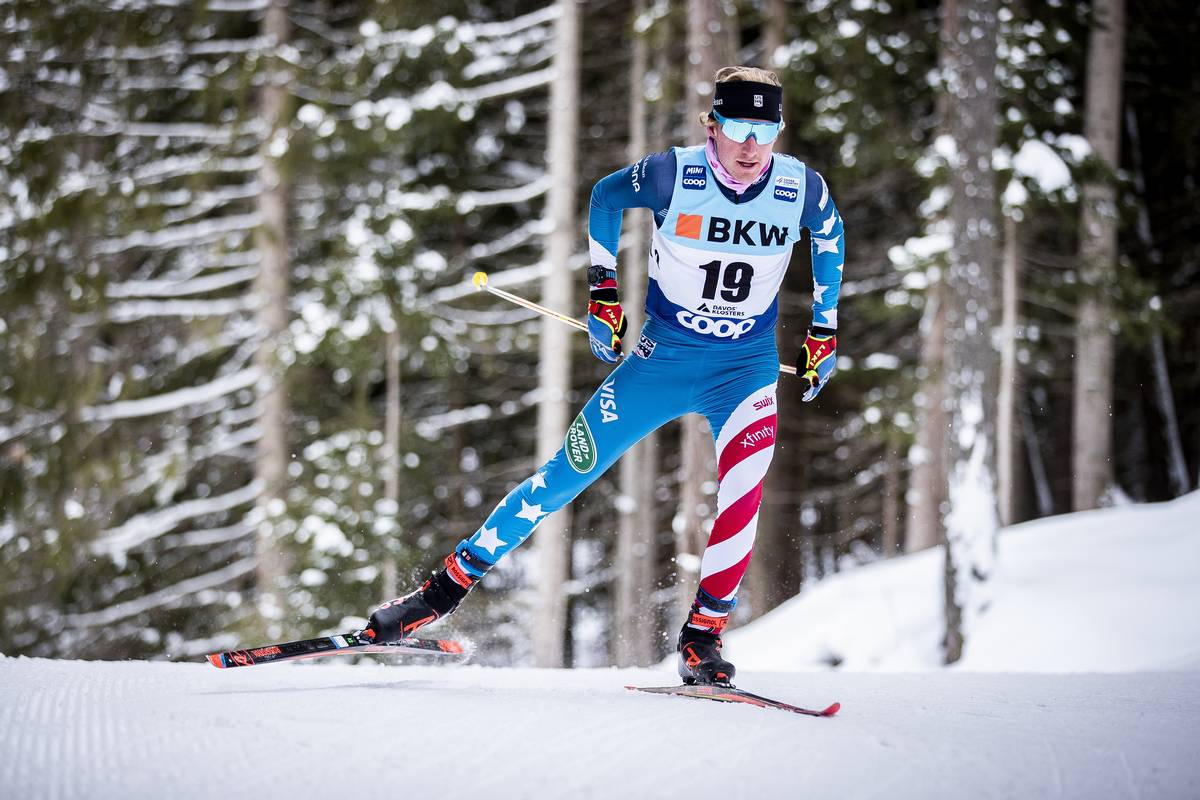 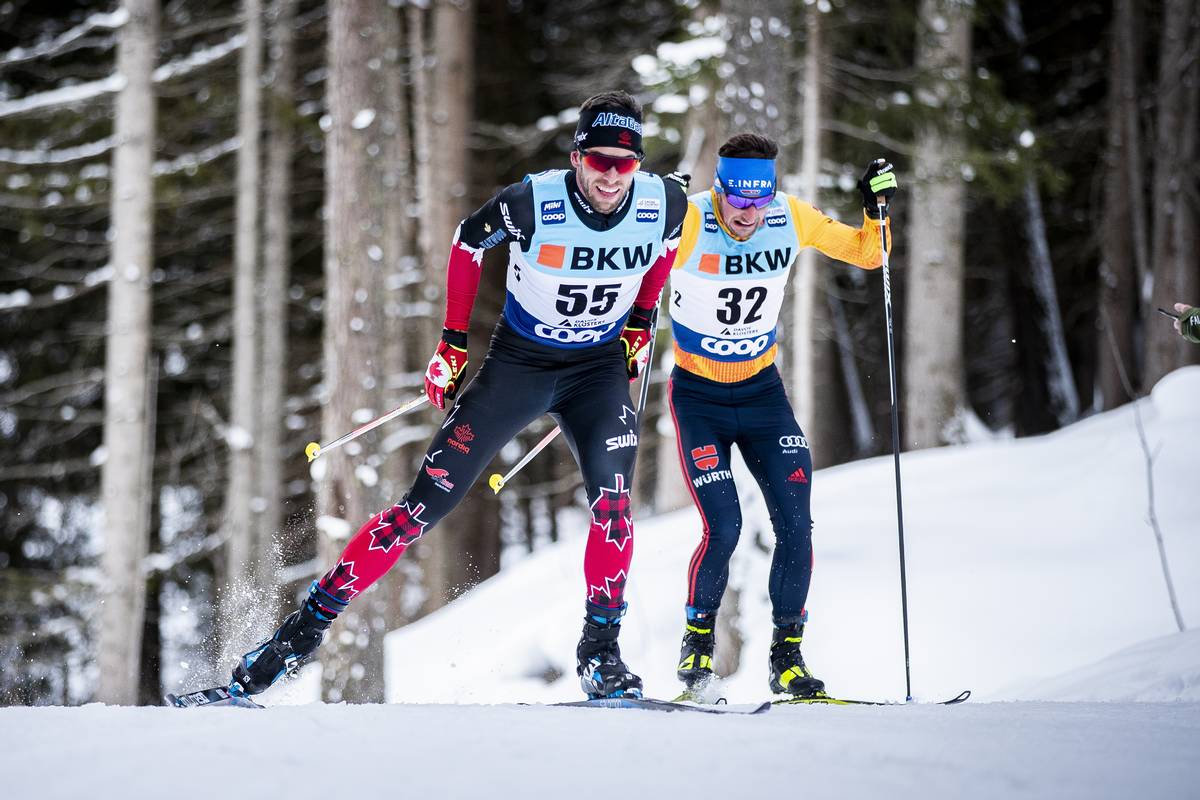 Heading into next weekend’s racing in Planica, Slovenia which features a team and individual sprint, Norway’s Johannes Høsflot Klæbo, who sat out Sunday’s Davos distance race, leads the World Cup overall with 520 points. Emil Iversen is the closest competitor, 72 points behind. Alexander Bolshunov of Russia, who placed seventh Sunday, leads the distance overall with 232 points. Iversen is second with a five point deficit.

Davos concludes Period I distance racing on the World Cup. The next distance event is the December 28th, 15 k mass start skate during the Tour de Ski. 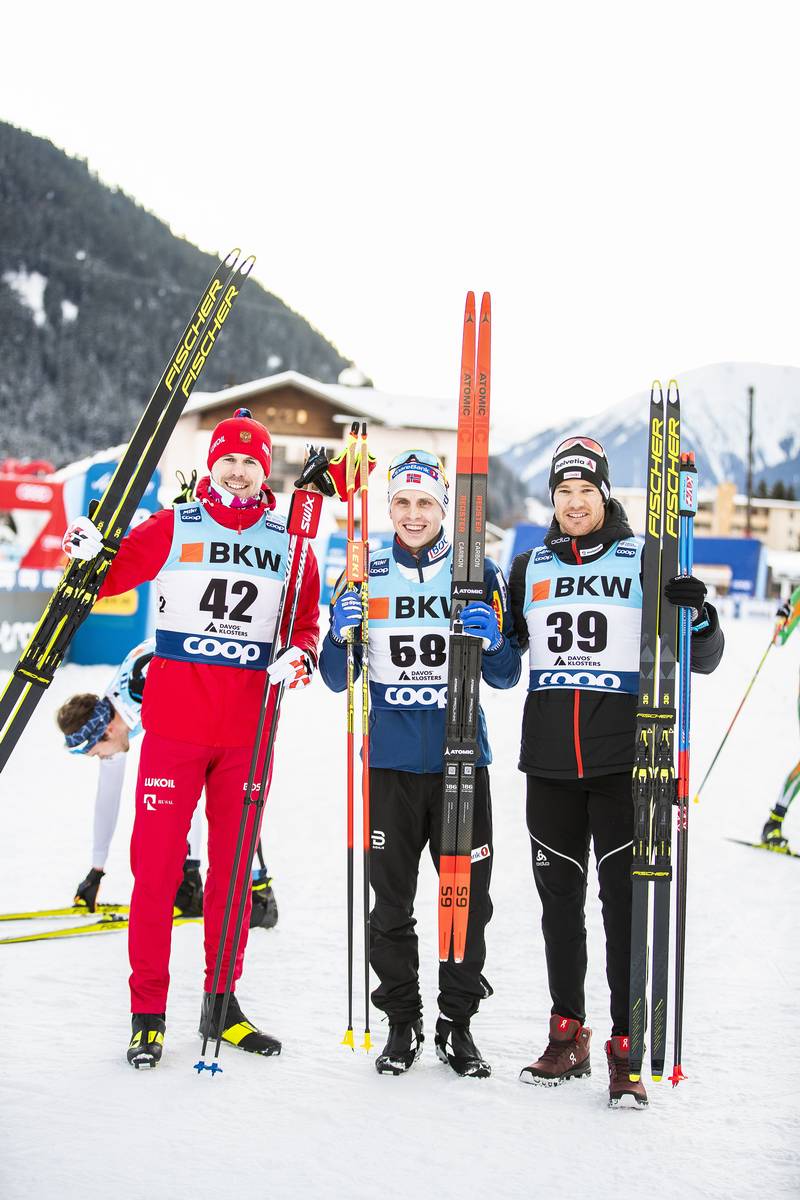