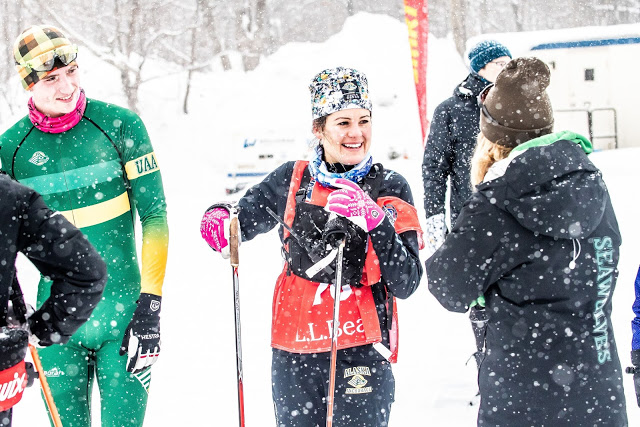 On April 1st, the University of Alaska Anchorage athletics department announced that interim head coach Marine Dusser-Bjornsen had been named Nordic Coach of the Year by the Rocky Mountain Intercollegiate Ski Association (RMISA) after her first year in the role. Despite stepping into the position last minute, Dusser-Bjornsen proved her readiness for the role and led the Seawolves to an outstanding season.

The men’s team finished the season in second place in the RMISA standings and the women finished third, combining to a third place overall finish. One of her athletes, JC Schoonmaker, also took 13th in the freestyle sprint at World Juniors and earned his first World Cup starts in Dresden.

Though only one event — the 5/10-kilometer skate — took place before the event was cancelled, the Seawolves were off to a promising start at the NCAA championships. The top three UAA men finished 4th, 7th, and 10th, and the top female took 10th with the second women less than a second behind in 12th. The men’s team was ranked second overall behind the University of Vermont, and the women were not far behind in 4th. 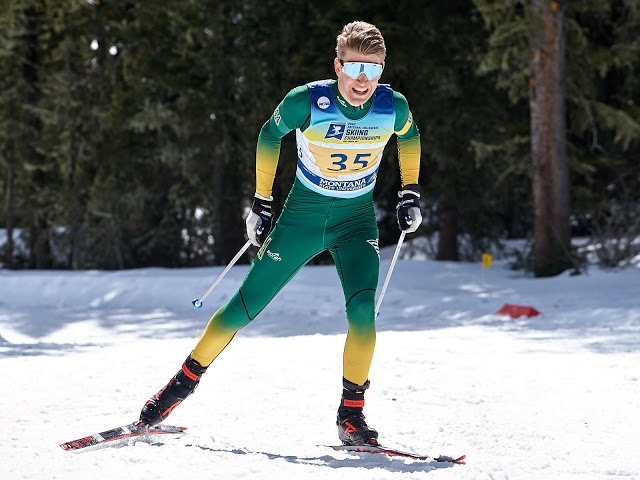 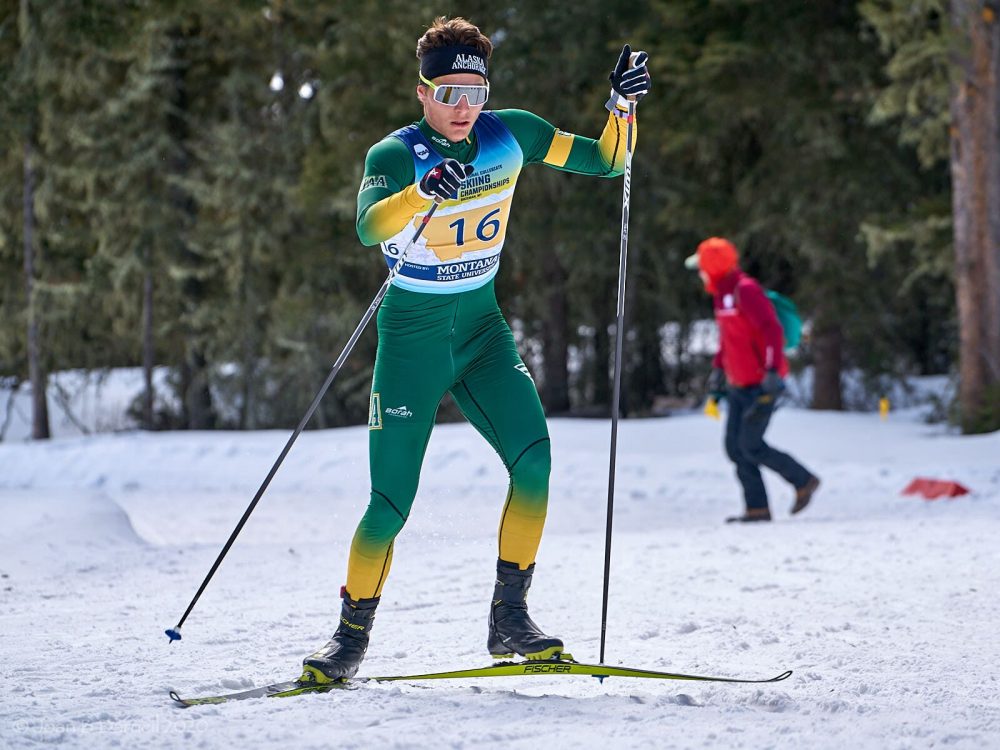 Before transitioning to coaching, Dusser-Bjornsen racked up an impressive resume in both biathlon and cross-country, which included winning the French National Junior Championships in biathlon six times and taking home three medals at World Junior Championships. During her two years as an athlete at UAA, Dusser-Bjornsen landed on the RMISA podium nearly every weekend, and earned two podium finishes at the NCAA championships in her first season. She again landed in the top 10 in her second year at NCAAs, earning a total of three All-American honors.

In the conversation below, Dusser-Bjornsen explains how her experience as an athlete has transferred into her coaching philosophy.

“In my biathlon career, I had a lot of struggle,” Dusser-Bjornsen recalled. “Biathlon is a sport where you have to struggle, because it’s very mental because of the shooting part of it. It’s not because you are the best at one race that the next race you are going to win. You can be first and then the next you can be last. So you have to start over everyday. It’s very difficult on your mind — you have to ask yourself a lot of questions. In that sense, biathlon really helped me — I am a better coach because to me that psychology aspect is very important.”

Dusser-Bjornsen has been the assistant coach for the Seawolves since 2017 and was slated to assist returning head coach Trond Flagstad this season, though complications prevented him from resuming the role last minute. After stepping into the position in his stead, Dusser-Bjornsen hired her former athlete Toomas Kollo as an assistant. Kollo graduated in 2020 and had begun graduate school. She also continued to utilize longtime volunteer assistant coach Adam Verrier, who has taken on a variety of roles with the UAA program over the last 20 years.

In an email, Verrier explained that in recent years, he has participated in the majority of practices and traveled to most races, including every NCAA Championship since 2009. Consequently, he has watched Dusser-Bjornsen transform gracefully from athlete to coach, and he vehemently expressed her talent in both capacities. 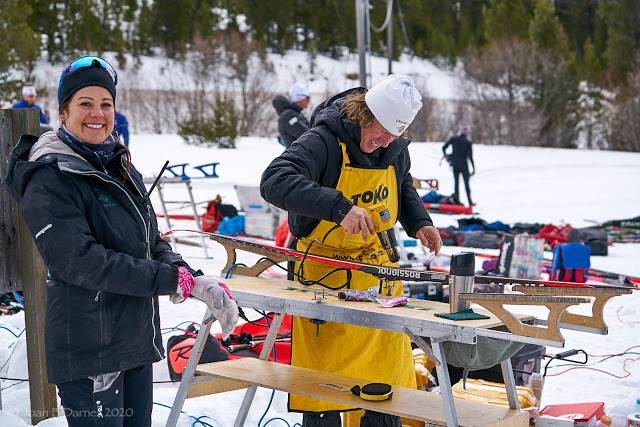 “Over the years, I’ve observed that she has an ability to see through the noise and static, to find the important thing that needs to be addressed,” wrote Verrier. “As an athlete, she came to us from a biathlon background, and needed a little technical help getting her classic skiing together. But she was able to quickly understand the heart of the technical requirements for fast classic skiing, and was on the podium by her third RMISA classic race. As a coach, she’s good at figuring out what may be impeding an athlete’s ability to realize their potential or to make a change in their training.  She’s good at isolating a problem in order to fix it. For example, I remember a time this fall when one of our men said, ‘I’ve been trying to correct this technique problem for years because I’ve known I need to, but nobody’s really been able to help me fix it. But Marine told me to just think of it this way….. and I’d never thought of it like that before. And just like that, I’ve corrected it. She was really able to see it clearly!’”

Verrier explained that Dusser-Bjornsen maintains high standards for herself and holds clear expectations for those she works with, which he attributes to her success as a leader this season.

“I think our UAA teams have done better when the athletes know that the coach expects really good skiing, and doesn’t have much time or patience for mediocrity. Our athletes know that Marine expects fast skiing, and I think they feel they have a responsibility to bring their best preparation and performance to training and races. Marine’s not afraid to give her opinion and to say what she feels. If you show up at practice without your skis properly prepared, you’re going to hear about it!” 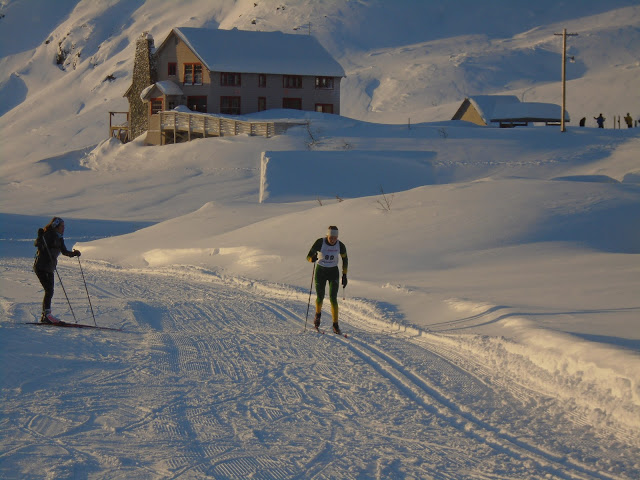 Marine Dusser-Bjornsen encourages her athletes during the opening race of the season, the Alaska Cup weekend in the Susitna Valley. (Photo: Adam Verrier)

Verrier concluded by emphasizing Dusser-Bjornsen’s grace in managing the abrupt and unexpected promotion to her role, and explaining how she was effectively able to delegate in order to focus on creating an optimal training plan and environment for her athletes.

“She was a little bit on her heels from the start. In this line of work, it’s very difficult to play catch-up during the season because things happen so fast, so it’s been a very stressful season for Marine with the unsettled nature of the assignment. And I think it’s natural and not unexpected that she would feel a lot of pressure to perform, given her situation coming into this season. She was fortunate, I think, to be able to recruit Toomas Kollo because he came in with a really impressive capacity for hard work throughout the entire racing season.  Toom’s solid presence, his ability to relate to the athletes (he was one of them last year) and his willingness and capacity to do so much of the grunt work, week after week, gave Marine a little bit of breathing room, I think, to make the perceptive tactical decisions that contributed to her coaching success this season and to her being selected as RMISA coach of the year.”

In the conversation below, Dusser-Bjornsen provides further insight into her transition and philosophy in working with the UAA athletes. She also discusses being a minority as a female head coach in the NCAA and how the Women’s Ski Coaching Association (WSCA) has supported her transition, and her future with the UAA program. Thanks for listening.