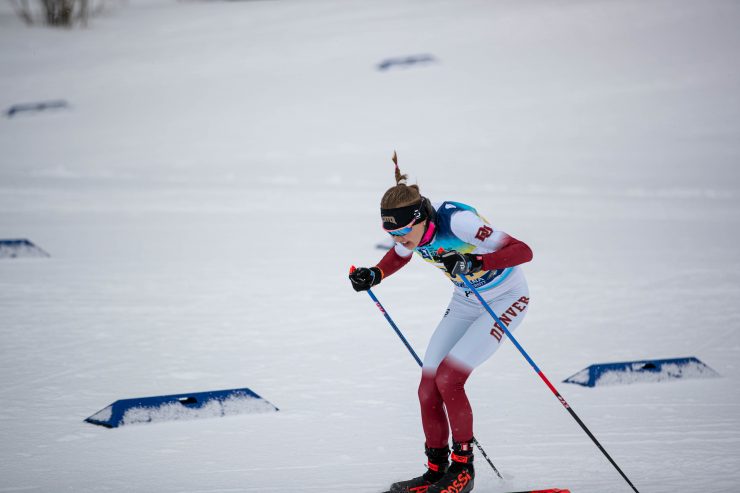 BOZEMAN, Montana – Thirty minutes after the conclusion of today’s nordic podium ceremonies, the NCAA announced that all winter and spring championship events were cancelled due to the COVID-19 pandemic, effective immediately.

An incredible day of racing suddenly turned sour as the news reverberated throughout Bozeman. There would be no slalom at Bridger Bowl tomorrow, no mass start cross-country races at Crosscut on Saturday, and no ceremony to crown the overall team champions. In a single press release, the 2020 NCAA Ski Championships came to a heart-breaking halt.

While the fallout from the decision will surely stretch into the off-season, here’s how the cross-country races unfolded today at Crosscut Mountain Sports Center.

The day dawned cool and cloudy, with low overnight temps making the snow firm and fast. With occasional peeks of sunshine through the cloud cover, it looked like it could be a classic Montana March day.

Nothing today would be that straightforward — a snow squall materialized thirty minutes before the women’s start. Although just half an inch fell, the course was totally transformed and slowed down dramatically.

Even though the snow eased up for the women’s race, the early starters had to plow through the fresh flakes. Skate tracks appeared around the loop as the first few starters raced through the powder.

Crosscut’s course is mostly rolling, but features brutal climbs at about the 1 and 4k marks. The climbs are long, steep, and demanding, especially because of the venue’s location 6,100’ above sea level. The new snow made the climbs sloppy, with a few inches of sugary powder sucking speed on their upper pitches.

Starters were reverse seeded based on regional rankings. Top seeds were randomized in the final ten bibs, making bib numbers 30-40 the racers to watch for podium places.

As the women rolled through the course, a pair of late starters separated themselves from the pack. Denver’s Eveliina Pippo led Middlebury’s Sophia Laukli by five seconds at the halfway mark. Behind the leaders, five racers  – Utah’s Guro Jordheim, Middlebury’s Alex Lawson, UVM’s Lina Sutro, and Dartmouth’s Katharine Ogden were all within a few seconds of each other at the halfway mark, battling for the next few places.

Laukli continued attacking the course with her signature high tempo, showing the form that earned her fifth in the Junior Worlds 15k mass start last week in Oberwiethensal, Germany.

However, Laukli couldn’t quite reel in Pippo, as she finished in second, just 4.8 seconds back. Pippo, with three wins on the RIMSA circuit this season, was a favorite to take gold today. She said “I’m happy with my win…the key was to focus on doing everything I can and not focus on the other racers.”

Jordheim emerged from the pack to finish third, followed by Ogden in fourth and Sutro in fifth.

The Middlebury trio of Laukli, Lawson, and Annika Landis has been on a tear throughout the EISA this season. Today they showed their winning ways aren’t limited to the East Coast, finishing 2-6-16, respectively, and amassing 79 points to take the team win over the University of Utah (74 points.) The UVM Catamounts, with Anya Bizyukova in seventeenth, scored 65 points and took third on the day. 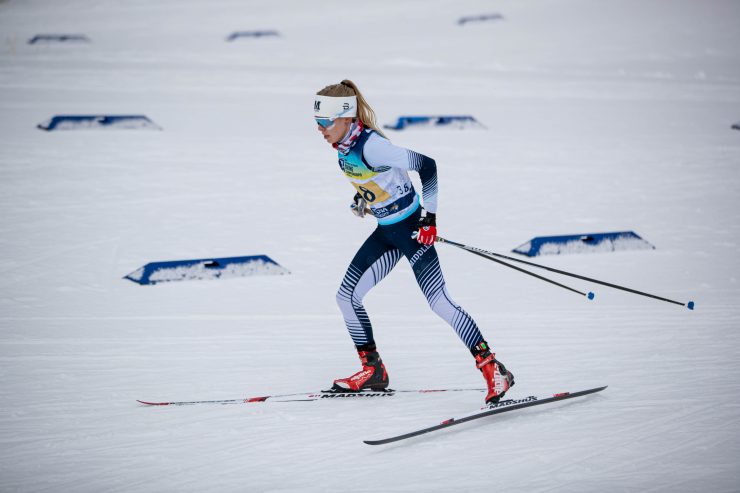 As the women cooled down and the men warmed up, the sun finally stuck around. The course filled up with spectators and racers, and the excitement was palpable as the first male skier took the line at noon. Once again, the top seeded racers were in bibs 30-40, with  the winner expected to emerge from that select group.

Ben Ogden accelerated like a rocket from the start, flying through the first 5k nine seconds faster than anyone else. Third through ninth places were separated by just fifteen seconds at the halfway mark, setting up an exciting second lap. The course, snow, and altitude conspired to punish anyone who started too fast and reward those who had paced their efforts.

Utah’s Sam Hendry started reeling Ogden in, coming back from a seventeen second deficit at 10k to a three second margin at 7.5k. Ogden came into the final climb and entered into a tunnel of Catamounts, with teammates, friends, and fans screaming on both sides of the trail. 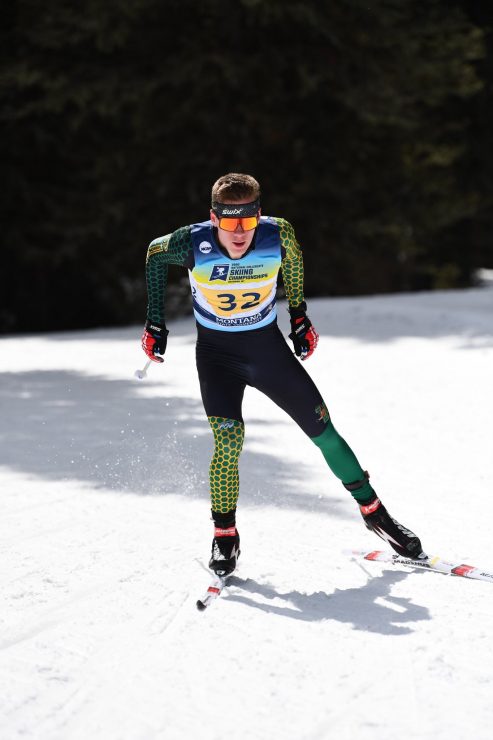 Ogden, charged up by the Catamount faithful, powered to the line and took his first NCAA title by just 3.1 seconds over Hendry. With a second-straight gold medal in the relay at Junior Worlds last week, Ogden may need to invest in a bigger trophy case. Ogden was thrilled with his result, saying “I’m ecstatic! I just came over from Germany, but I was super stoked to rest up and throw down today.”

Hendry charged into second with the fastest second lap, while Denver’s Bernhard Flaschberger, winner of a pair of RIMSA skate races this winter, took third for the Pioneers. University of Alaska Anchorage’s Sigurd Roenning was ten seconds further back in fourth, while UVM’s Karl Schulz finished fifth.

Along with Bill Harmeyer in twelfth, Ogden and Schulz, the UVM trio combined for 88 points, giving the Catamount men the team win on the day. Roenning led Anchorage to 77 points and second place, while Hendry’s effort helped the Utes pile up 67 points and take third place.

Given the cancellation of the mass start, NCAAs were effectively a one-day championship. The University of Vermont men and women combined for  153 points, taking the 2020 nordic title. Utah was close behind with 141 points, while Alaska Anchorage scored 123 and finished third.

Complete nordic results are on Summit Timing.Team scores are available on RIMSA.

You can read the NCAA statement on championship cancellation here.