Nature has a lovely way of being, well, natural. In other words; marginally unpredictable, sometimes downright uncomfortable, and finicky. Prior to the Ski Tour 2020’s Stage 4 weather forecast and on-the-ground big-wind gust reality, the stage had been scheduled to pulse 38-kilometers from Storlein, Sweden to Meråker, Norway in a point to point event. Cool, right? An international border crossing during a race, with a single sanctioned coaching/feed zone for athletes around the 25 k mark. A think-out-of-the-box format with a nod to the old-school days of Norwegian countryside racing.

Nature interfered. Or at least the predicted inclement weather scheduled to pummel the rolling mountains featured in the point to point race was enough to scare off race organizers. 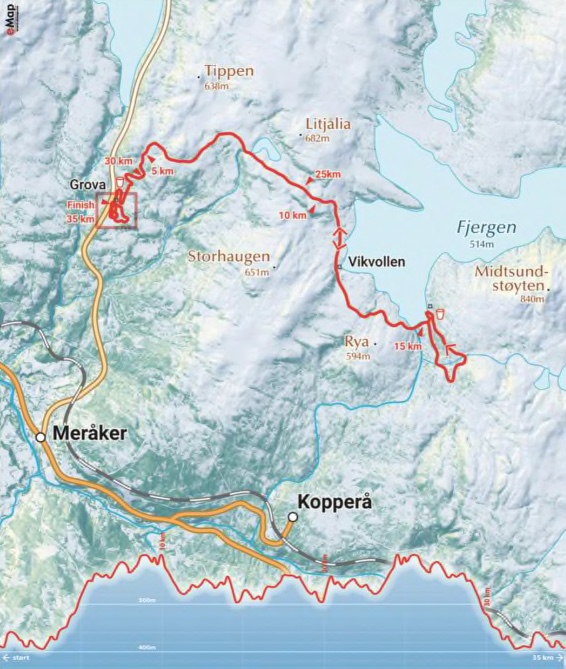 An updated map and course profile for Stage 4 of the Ski Tour 2020.

The stage was rerouted the stage. Stage 4’s freestyle mass start streamed from the start/finish area in Meråker, to the original coaching feed zone at approximately 15 k, where athletes skied a several k loop, and then routed onto the main course back to the Meråker ski stadium. In total, the new route was 34 k, with approximately 30 k consisting of an out-and-back. Organizers maintained a single feedzone policy. (Thus, you’ll see several athletets with hydration belts. Most notably, the Norwegians.) 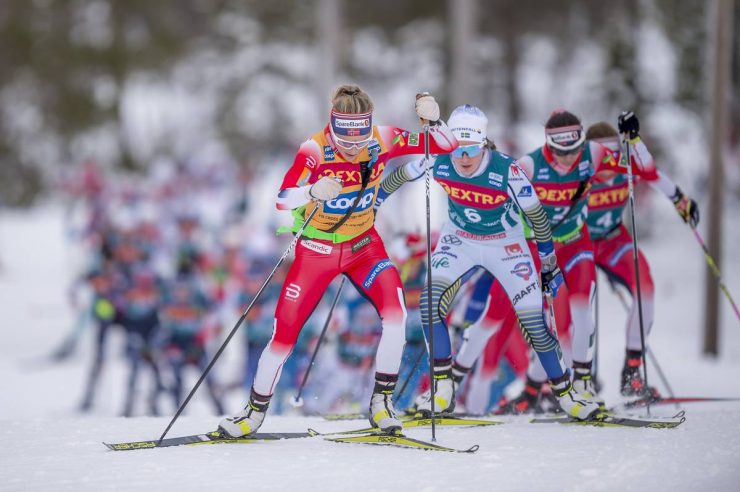 Prior to her breakaway on Stage 4, Norway’s Therese Johaug began to stretch the cord to the pack. (Photo: NordicFocus)

This was no surprise, as she has dominated World Cup distance events with a few second-place efforts here and there, to prove maybe she is human after all. Analyzing her results, it’s clear she is a record-setter. And another record of sorts fell today as Johaug won in  1:26:32.8 hours. It was Johaug’s eighth individual distance World Cup victory in a row. A streak that outdoes her run of seven consecutive wins, which the Norwegian has strung together on two occasions — once between January- March of 2016, and again between March-December 2019. 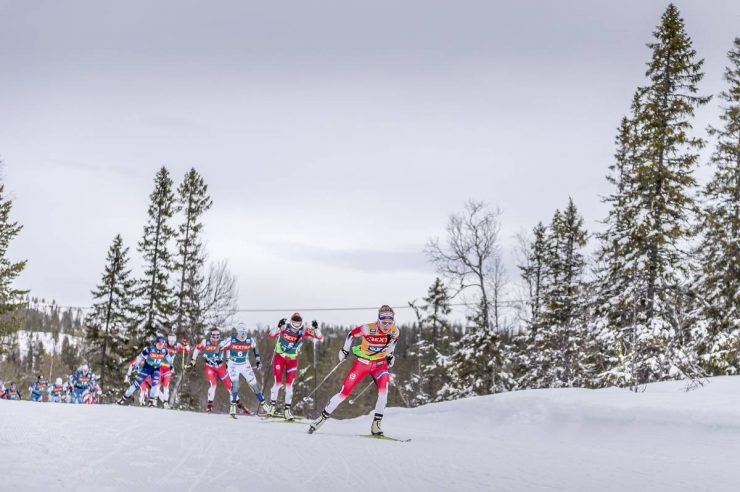 Johaug on her 34 k journey. It’s early, the pack is still in contact. (Photo: NordicFocus)

The day was not a singular Johaug show. Her teammate Ingvild Flugstad Østberg kept the racing on the front-end honest for the overall win.

Earlier in the race, it did appear like a Johaug runaway. At 14 k, she had gapped the second place Østberg by 28.0 seconds. Chasing in a line through the time check along with Østberg were Norway’s Heidi Weng, and Sweden’s Ebba Andersson. American Jessie Diggins led a group, 1:24 back, including Austria’s Teresa Stadlober, and Krista Pärmäkoski. 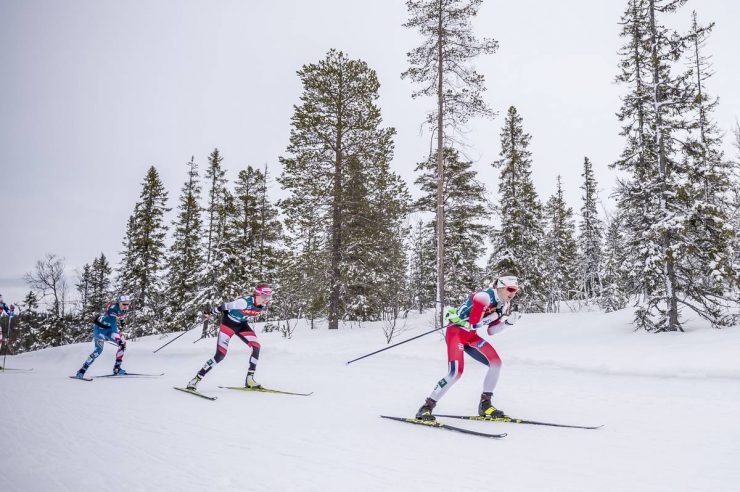 Through 20 k, those gaps remained relatively firm. However, out on course, the winds were evident with swaying treetops. A solo effort can take its toll with no draft to exploit. No matter how you look at it, either Johaug slowed or Østberg sped up, the time between the two skiers diminished between 20 k and 30 k. At the 31 time check, Johaug’s lead had shrunk to 7.9 seconds over Østberg, who had snapped away from a hard to shake Weng early in the race. Weng paced through the 31 k mark in third (+51.0), Andersson in fourth (+1:37.3), and Diggins in fifth (+3:01.2).

Have no doubt, despite Joahug’s singular dominance, this was a hunted Johaug. Her effort in the closing Ks never waned, as Østberg proved a worthy foil. As much as Østberg wanted to will the 30-40 meter span to Johaug away, Joahug was able to keep four seconds between herself and the fearless Østberg at the finish. Weng came through solo in third overall (+1:21.6), with Andersson in fourth (+2:00.5). 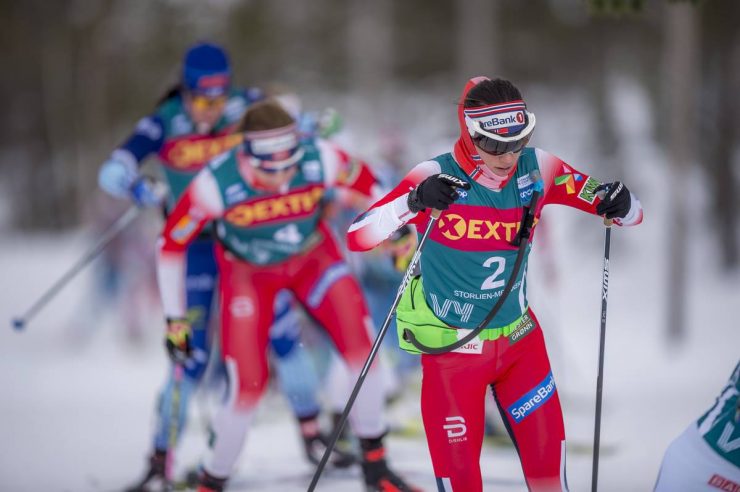 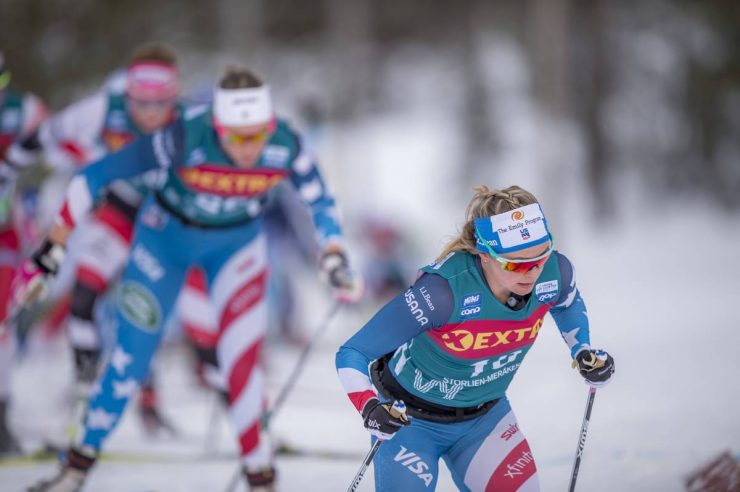 “It’s been an adventurous couple days here in the ski tour,” emailed Brennan. “A lot new things, a lot of surprises, and a lot of last minute changes. Our point to point race was changed due to high winds but we still managed to to an out and back in the same trail starting and finishing in Meråker. It was really windy still making it challenging to ski alone out there. Knowing that I did all I could to stay in my group. There were a few kilometers that I was dangling and unsure if I could hang, but I was fortunately able to find another gear climbing and work my way back up to my group. , unfortunately,y missed the first break on the way back but was able to pick off some people all the way to the finish. I am really happy with the race as 30km has been a struggle for me in the past. I am still feeling strong in the tour and am going to do all I can to hold on to a top 10 in the closing stages.” 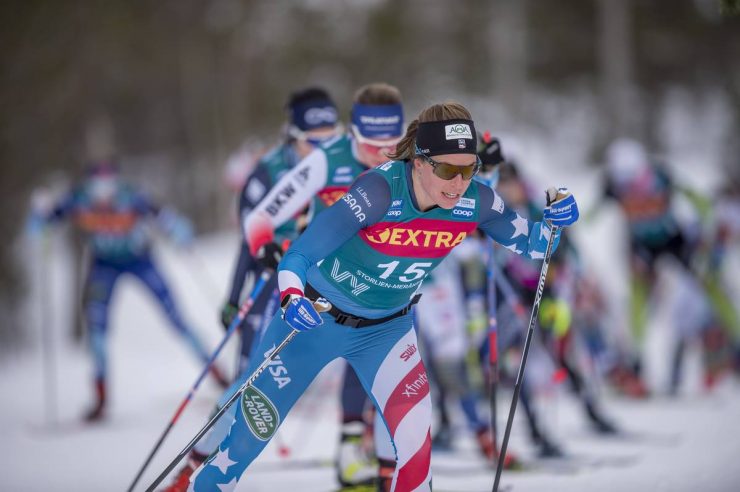 “It was a thrilling day of ski racing today, with lots of course changes, weather delays, a long2-hour bus trip to the start, and a total ‘unknown’ in front of us with this long race,” wrote Maubet Bjornsen.
“I have finally felt my body feeling better, and I just kept my mind excited to take on whatever was coming.
“It was windy as heck, which made the course super tough, but still beautiful. I didn’t look around a ton, because I was so focused, but in the few chances we went down a hill, and I got a glimpse, I just felt so lucky to be part of this fun experience. It is so different than any race I have ever done, and the total ‘unknown’ put the cherry on top.
“I’m so excited to find my strength again, and put together a race that is more representative of where I am at. 11th in a long distance skate race is huge for me!” 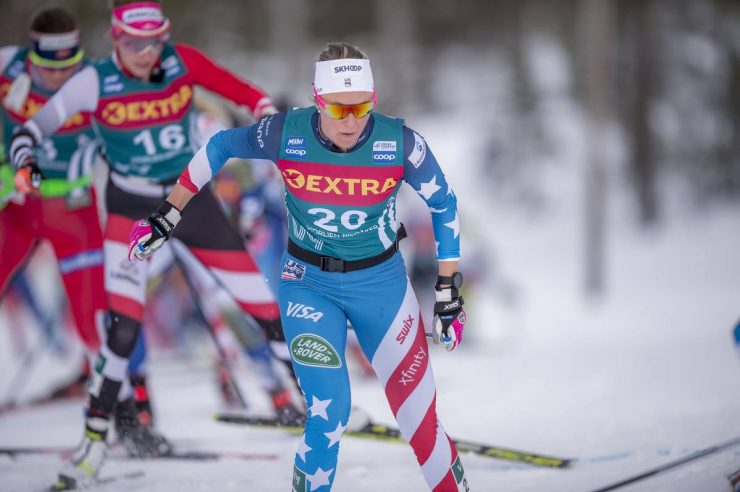 In the Ski Tour overall, Johaug looks unstoppable – she has won all four stages thus far. Her elapsed time, which factors in a 60-second time bonus for her sprint stage win on Tuesday, and three 15 second intermediate time bonuses on the course Thursday, is 2:16.33. Østberg sits in second (+2:06), Weng third (+2:39). Diggins was the best-positioned American in sixth (+6:02).

Racers have a rest day Friday, with racing starting up in Trondheim for Stage 5’s 1.5 k classic sprint. 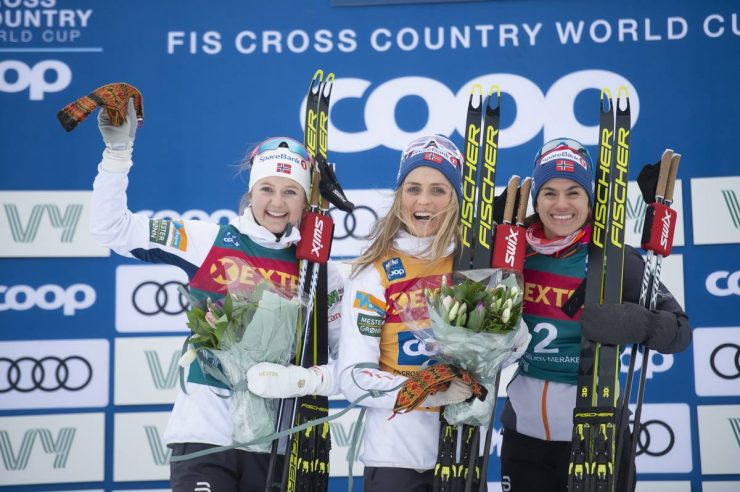