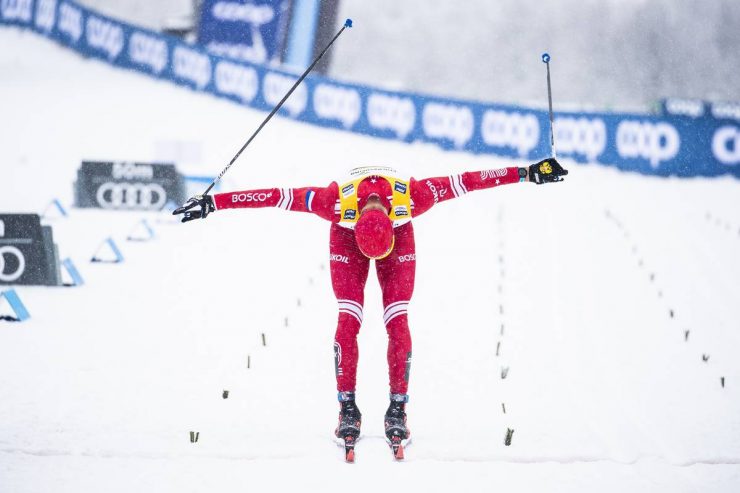 More snow. More fans. On Sunday in Nové Město, Czech Republic, day two of a pursuit weekend unfolded amidst trees draped in snow and a 5 k course with portions lined with fans. With snow falling, the men raced a 15-kilometer classic pursuit.

Rewind to yesterday’s first portion of the pursuit format, a 15 k interval start skate, which established the time-back start positions for Sunday. Russia’s Alexander Bolshunov won that race by a margin of 24 seconds over Finland’s Iivo Niskanen and 40 seconds over Norway’s Sjur Røthe.

In a race where the chasers could coalesce into working groups hunting down time on Bolshunov, and on a day when the body might not feel perfect, or the skis begin to slip late in the race, one could posit several scenarios where Bolshunov was reeled in. 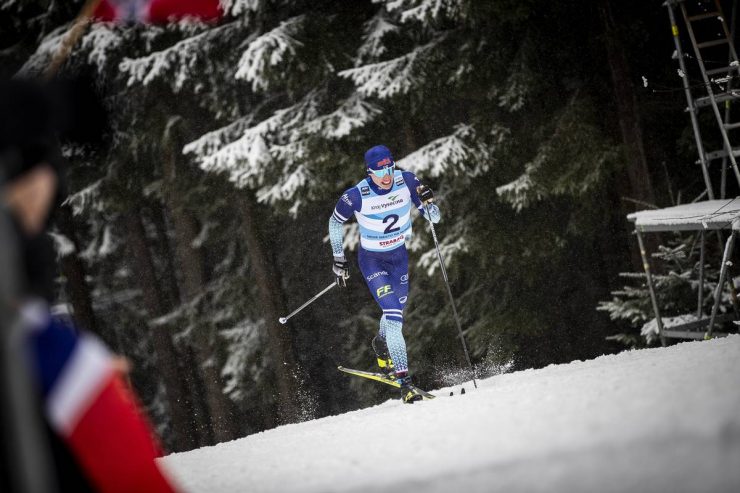 Whatever imaginations the chasers had of keeping Bolshunov in sight, let alone close enough for the catch, were illusions. Bolshunov proved on Sunday that his fitness is out of reach for the moment. He won the pursuit by adding time to his initial 24 second lead over Niskanen. The finish time stopped for the Russian at 37:01.3 minutes. 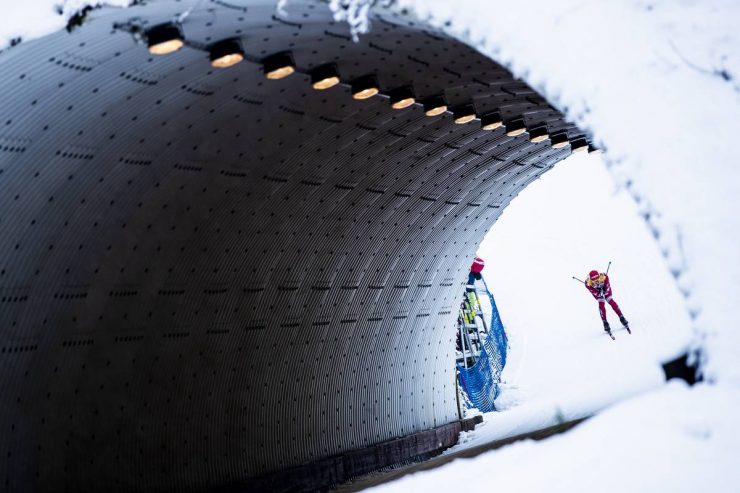 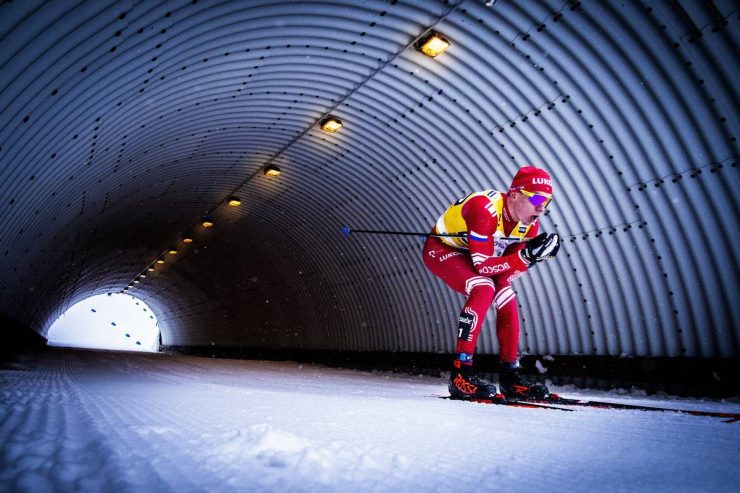 “It was a good race but also very hard because the full distance was very long,” Bolshunov told FIS after the race through a translator. “Fortunately, for the full distance, everything was under control. Lots of coaches told about the gaps and I was able to keep these gaps and make the best at the finish.”

The tension for the win never developed. However, the positioning behind Bolshunov for the remaining podium spots was spicey. Back in seventh and eighth place were a tandem that became the principal animators on Sunday. Johannes Høsflot Klæbo in bib 7 and Simen Hegstad Krüger in bib 8, began 1:12 and 1:13 back, respectively. 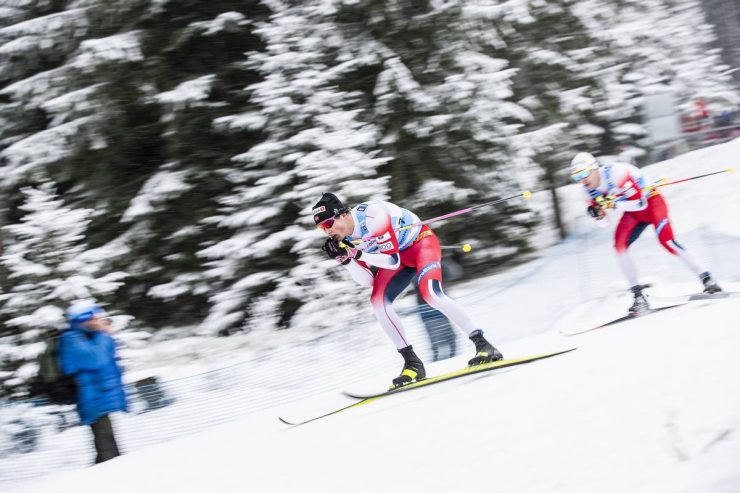 Early into the race, the duo began making time. At 3.6 k, they had closed the gap to first to almost a minute back. This was less a threat to Bolshunov, and more a signpost to those sandwiched between the leader and their chase; Klæbo and Krüger were hunting.

Lapping through at 5 k, they had moved into fourth and fifth and 20 seconds behind Røthe. Stride by stride eventually the time was swallowed as were Røthe and Niskanen. Klæbo, Krüger, Røthe, and Niskanen came through the 10 k check together. Five strong, this group had no real threats from skiers gapping up from behind. They could settle into a hard driving pace as they covered the final 5 k lap. (Bolshunov, maintaining his solo off the front, had a 46 second lead on this group at 10 k.) 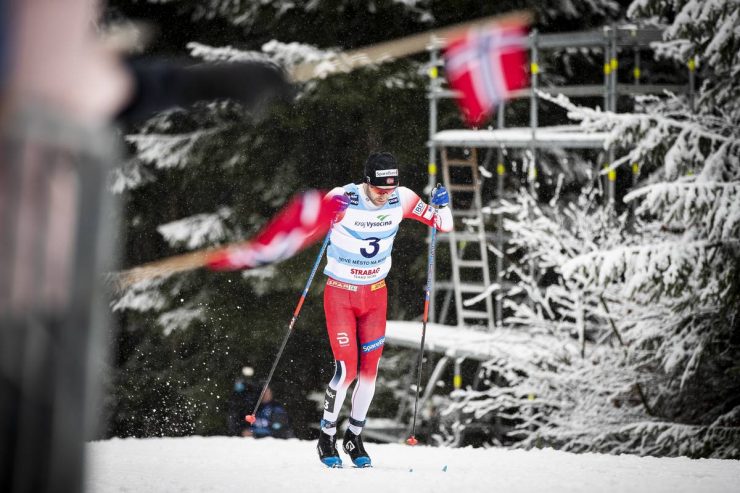 Sjur Røthe of Norway. Shown here during the 15 k classic pursuit, a race he placed fourth in. (Photo: NordicFocus(

At moments, the Norwegians looked as if timed by a metronome; their limbs synched as they moved efficiently uphill. Niskanen, the lone outlier, remains a formidable 15 k classic skier. Yet, at the 11.1 k time check, the Norwegians pulled through striding in the tracks, while Niskanen ran outside, keeping tempo, but perhaps working just that much harder to keep time.

Krüger is known as a skate specialist who, on this day, illustrated he could find his classic skiing groove. He drove the pace, leading the line of striders, through the hill at 13.6 k. Again, Niskanen ran up the side. The Finn was able to catch a draft on the next downhill, but trending into the next uphill, he popped off the Norwegian train. 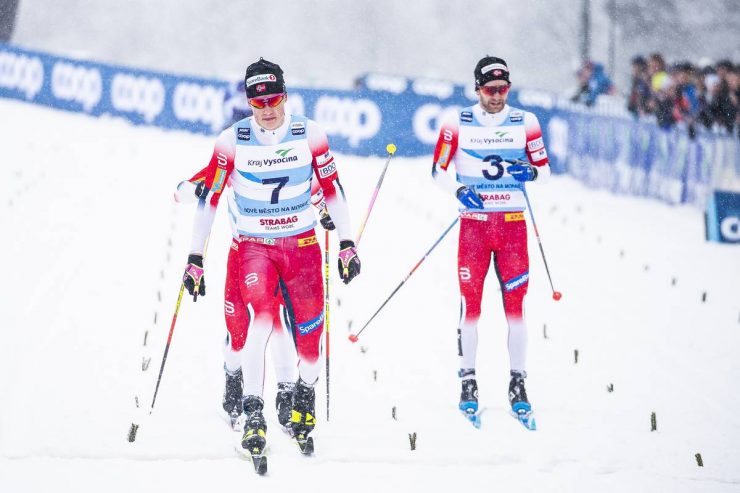 David Norris (APU) slid into 30th (+3:43.8) for the day. Norris began in bib 27 and skied much of the race with a group of five other skiers. With a fall near the finish, Norris was able to right himself and retain a top-30 in the pursuit. Norris raced the 31st fastest time of day. 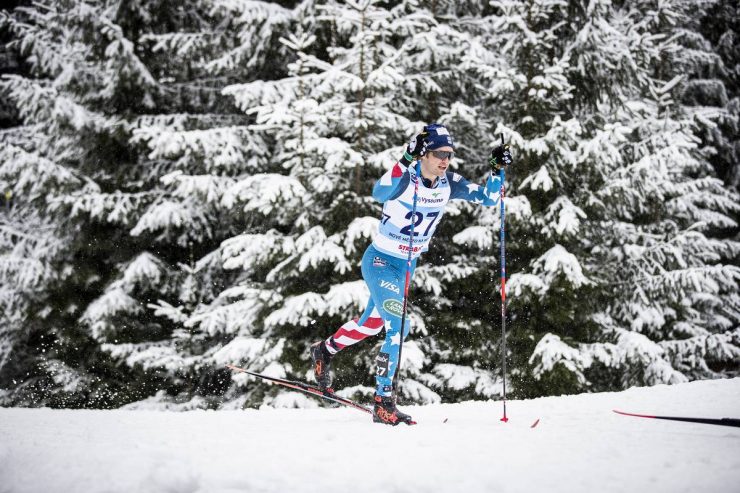 “This weekend went well overall,” Norris emailed. “After the Tour, I was unsure how I would feel. Fortunately, I had good energy and was able to dig deep all weekend. Today I finished a little disappointed because I felt comfortable skiing with a group that had established, but at some point splintered and I found myself in the chase pack. These moments are the toughest for me. But, I’m improving. There were also plenty of other points throughout the race that I can find encouragement from.

“The skis were great in these tough conditions. I’m very fortunate to have the awesome ski service on days like today. Big thanks to the USST wax techs and coaches.” 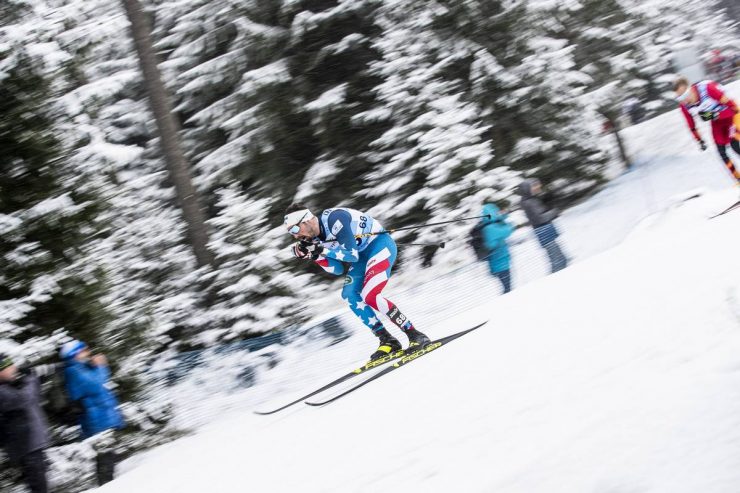 Racing continues next weekend in Oberstdorf, Germany with a skiathlon and a classic sprint. 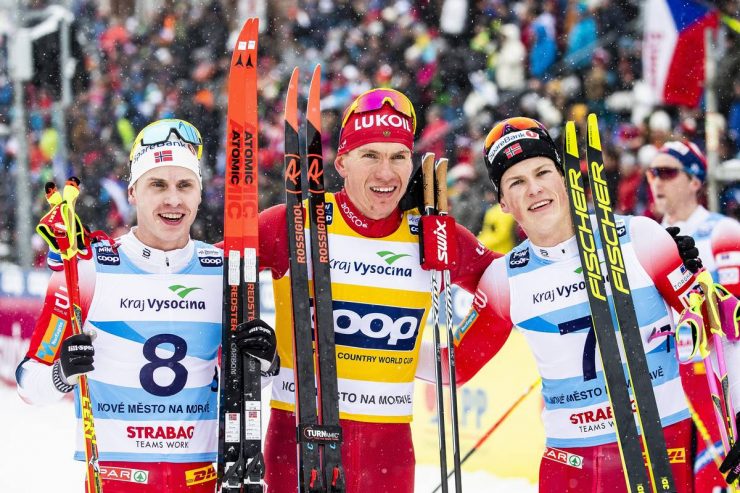