While many skiers were blowing the dust off of their rollerskis, hitting the track or trail, or looking for crust to cruise on May 1st, Erik Bjornsen and his wife Marine Dusser were previewing the race course for the Fossavatn Ski Marathon, or Fossavatngangan, in Isafjördur, Iceland. 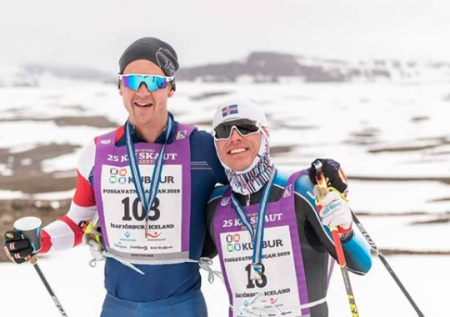 While it might seem odd to begin a new season by racing a 21 k followed by a 42 k just two days later, Bjornsen and Dusser agreed that they did not go into the race with performance goals, rather to experience a new place and to enjoy the sport they both love.

“I feel like we went on vacation and we made a race out of a vacation,” Dusser explained in a call. “We like nordic skiing and we both like racing, but we didn’t really put any pressure [on ourselves].”

Though the Fossavatn has only been a member of the World Loppet series since 2015, the race dates all the way back to 1935. In addition to the 50-kilometer marathon distance, which is always classic technique, the event features a 25 k skate and classic race and a 12.5 k classic in the days preceding. There are also 1 k and 5 k children’s races. Typically, each of the courses are one loop, but because it has been a low snow year in Iceland, this year the course was rerouted and distances were scaled back as the longest available loop was 21 k, which the marathoners skied twice.

“It was kind of like skiing on the glacier [in Alaska],” Dusser shared. “You have no trees and pretty mellow terrain. No steep hills, but it’s up and down. Erik was able to double pole the classic race, but for me, it was too hilly, so I was classic skiing.” 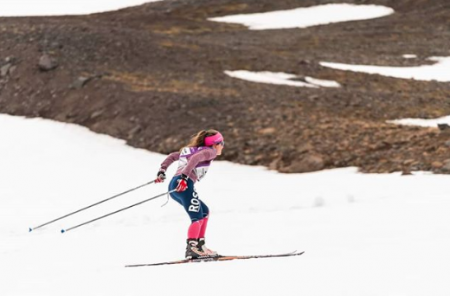 Marine Dusser on her way to a second place finish in the 21 k skate at the 2019 Fossavatn in Isafjördur, Iceland. (Photo: Instagram @marinedusser)

While they may not have approached the race with goals, both walked away with strong results. Dusser won the 42 k classic and placed second to Caitlin Gregg in the 21 k skate, while Bjornsen was 7th in the classic and 2nd in the skate.

A glance at the results over the last few years shows names like Iivo Niskanen, Riita Lisa Roponen, and Petter Northug, just to name a few, which begs the question, ‘At an odd time in the year, what is drawing top names to the 66th north parallel for a marathon?’. The duo explained that the race manager, Bobbie Sigujónsson, had contacted Bjornsen about traveling to Iceland for the event, and has enticed other top athletes to do the same.

“I think he has been pretty good with marketing and communication, and this race is pretty sexy because it’s very pretty there and it’s so different than anything that you can see [elsewhere],” Dusser explained. “And it’s also in May, so it’s easy to get good athletes because people are on vacation. And I think that they are pretty curious about Iceland, so it’s easy to get big names because people can make a vacation out of the race.”

The couple enjoyed having the opportunity to spend time around the other top athletes attending while away from the World Cup setting.

“We got to spend some time with [Nikita] Kryukov and [Alexander] Panzhinzkiy and Iivo [Niskanen],” said Bjornsen. “I mean all those guys have Olympic gold and silver medals, so it was pretty cool to spend more time around them. We were in the same hotel as Kryukov, so we actually got to know him quite well and that was fun.”

In addition to complimenting race organizers and noting how much fun people were having in the race itself, both Bjornsen and Dusser recommend the event to anyone looking for a novel experience.

“There was a big dinner – a “fish party” they called it – where they have live music and an announcer and really good food and stuff,” said Bjornsen. “So I’d just say that we highly recommend it to everybody. It was a really fun experience and if people get the opportunity, it’s a really cool one to do in the spring at the end of the year to have a fun end of the season.”

While the names at the front of the pack might seem intimidating, Dusser added that the Fossavatn race series is inclusive for skiers of all ages and abilities.

“There were a lot of masters and I think this race is really open for all of them,” said Dusser. “Because it’s not very all-terrain either — you don’t have very long uphills. I think it’s pretty attractive for all levels. You can see every age and every level can go and have fun, so it’s not just for athletes, so it’s kind of cool.” 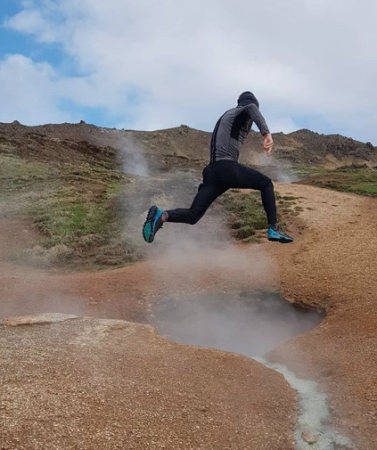 Erik Bjornsen leaps over a geothermal spring during a trail run in Iceland. (Photo: Instagram @ebjornsen1991)

Capitalizing on the opportunity, the pair used the week before the race to explore and see other parts of the country, which was new to both of them.

“We flew into Reykjavik and based out of there for three days, and explored all around that area for day trips,” Bjornsen shared. “We’d head an hour out of town each direction each day and saw different parts of southern Iceland. It’s not a huge place, so we were able to see quite a bit around Reykjavik in those first three days. Then we drove five – 600 miles to the northwestern part of Iceland [for the race]. It was in the west fjords and it was the biggest town in that section of Iceland. So it was really cool. I feel like we saw half of Iceland, or quite a bit of it, and of course snippets of the area along the way.” 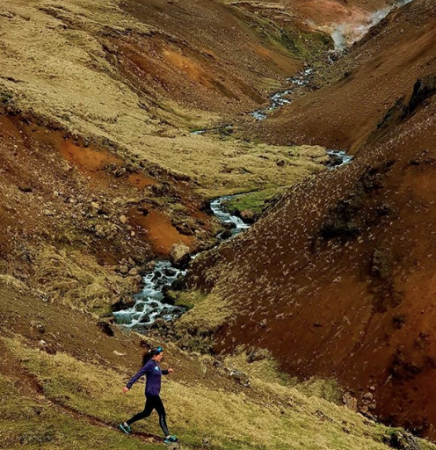 Apart from the more obvious features that contrast their coastal Alaskan home – lower mountains and turquoise blue hot springs – they were taken aback by how much closer to the sea they felt there and also by the size of the waves.

“On the drive up there [to Isafjördur], we actually spotted some whales,” Bjornsen recalled. “You’d drive for an hour and you basically wouldn’t see anybody. We were driving through these fjords and it was a day where there wasn’t a lot of wind, so the sea was pretty quiet, and there were three or four whales that were swimming 150 or 200 meters from the road. We just turned the car off right on the road and watched. In Anchorage, it’s a bit different. You have to drive a ways. We’re in the Cook Inlet right now, and there is a lot of glacier silt, so it’s never very deep. There are some whales that are around but you rarely… it’s just a different feel around here.”

Looking ahead, Dusser, who has coached for the UAA Seawolves the last two seasons, will be continuing her work with the Alaska Biathlon Association, including coordinating the upcoming spring training camp. In her own ski career, Dusser was a member of the French National Biathlon Team. During that time, she won three medals at the Junior World Championships in biathlon and was the French Junior National Champion six times.

“We have a camp the first week of June and usually we try to invite a bunch of biathletes,” Dusser explained. “Last year we had a biathlete from Switzerland, she actually won the World Junior championship, and Tim Burke is coming as well to help coach, so that should be fun. It’s pretty busy organizing that camp, it’s pretty big every year, so it’s nice.”

Bjornsen, who this season advanced to the USST A-Team, will be continuing to work toward the upcoming World Cup season, but is also looking forward to upcoming non-ski-related events this summer.

“I’m getting back into training,” Bjornsen stated. “Doing a similar camp schedule that I’ve done in the past, so I’ll be heading down to Bend here in about a week, definitely Eagle Glacier this summer, then I’m headed to Norway, and a fall camp with the ski team. My sister is getting married [in July], then we’re having Marine’s parents come to town and my parents are coming of course, so it should be a fun summer.” 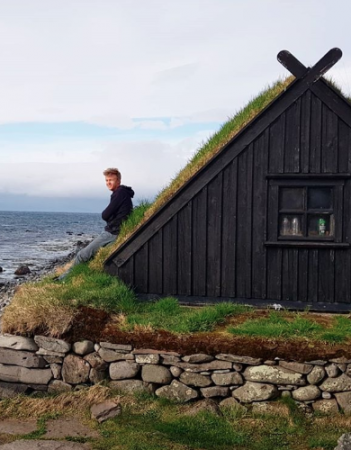