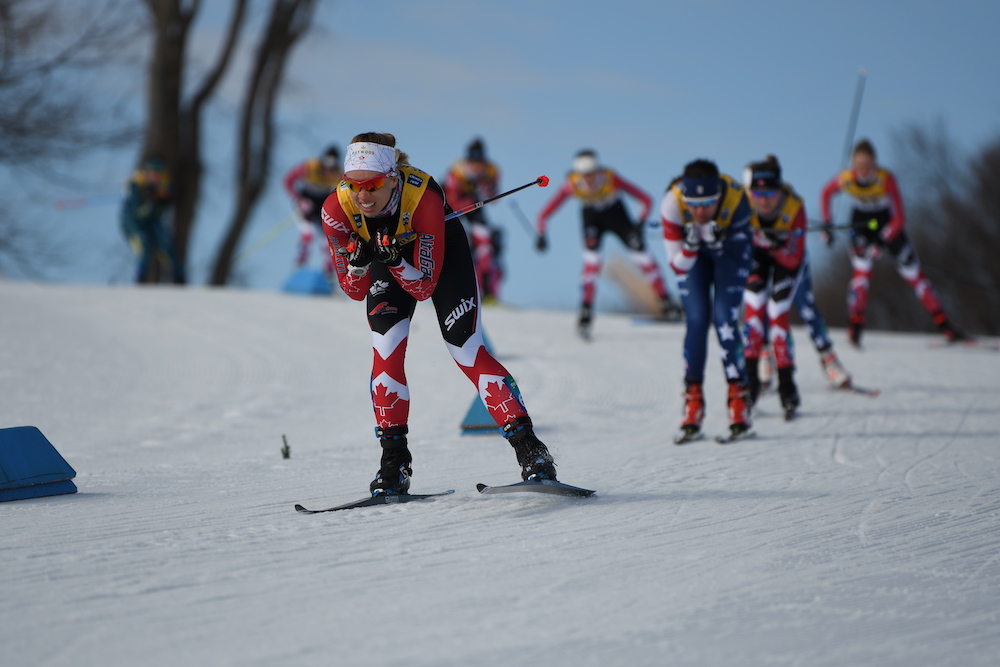 Canada is moving into a new era in skiing. An era with less World Cup podiums and more emphasis on developing future podium athletes.

“Train at what you want to be good at. If its climbing, climb. If it is chess, play chess. Ski training has many elements of course, but in the end the best training to race fast is to race.” — Erik Bråten, National Team Head Coach

In the near future, more Canadians will spend more time racing in North America. The trip criteria is clear that any athlete who wants to stay on the World Cup all season has to demonstrate multiple top 12 finishes. Team selection follows the same path.

For this season, there are six World Cup race days in North America. Canada gets ten Nations Group start positions for the five race days hosted in Canada plus a bonus of another ten Nations Group starts in Minnesota. With these starts available, Nordiq Canada (NC) seems very comfortable skipping the first two World Cup weekends in Ruka and Lillehammer. Three Canadians, however, Emily Nishikawa, Dahria Beatty, and Russell Kennedy, will race in Davos and Planica. Smaller than usual teams are expected again in the new year.

The overall picture is three less World Cup weekends than last season, and fewer athletes all the way through. That doesn’t mean less racing, but it does mean less travel.

The era when the top US skiers came up to Canada to improve their FIS points seems to have ended. At that time, US skiers were excited to find more competitive events to push them harder. For the last few years, it has been Canadian skiers who are happy to get pushed out of the top five by foreigners.

For the last few years, Canada and the US have cooperated to increase the level at select weekends with joint NorAm/SuperTour events. While this adds work for the organizers, the athletes have universally been excited to reach across the border. Both NC and US Ski & Snowboard (USSA) seem happy with the development potential.

“It’s a lot cheaper to race south of the border than fly to Europe”, NC’s new Events Coordinator Jeff Ellis told FasterSkier, explaining that it was cheaper for both athletes and the team. The shorter trips also allow more days training at home where the athletes have a higher level of support.

“Merging a select few Canadian and American Continental Cup events helps strengthen the competitive field,” USSA’s Bryan Fish wrote in an email to FasterSkier. “Both the Scandinavian Cup and Alpen (OPA) Cup have eight nations involved in their respective Continental Cup series.  Their robust competitive fields are a strong method of preparing their next generation.”

For 2020, NC decided to hold nationals right after the World Cup Finals in Canmore. Scheduling nationals three days later and six hours drive away at Sovereign Lake makes it possible for all the top Canadians to attend which raises the level of competition and gives younger athletes more exposure to senior level speed.

The same factors were also important when USSA was planning SuperTour finals.

“Most of North America’s strongest World Cup athletes remain in Europe for a majority of the season so they have the best chance to succeed at the World Cup level,” Fish wrote. “This is critical for their success on World Cup, however that can leave a gap in competitive strength in North America.”

Combining SuperTour finals and Canadian nationals into a single event will raises the level of competition. It also creates another opportunity for younger athletes to combine in a single trip a full week of racing and the chance to be trailside at the World Cup.

In the future, NC may revisit other European series as a way to add more rungs to the ladder to the World Cup. “Having development trips to Europe, and doing other kinds of racing could be interesting: If it’s OPA cup, or Scandinavian cup, or whatever it is.” Bråten said.

Kikkan Randall (bib #52) might have had her first classic day of the season on a race course, but the real action was in the younger categories.

There is also a push to add more races in every region. Tier 2 events like the Sovereign Open, might draw a few big names, like Caitlin Gregg, on their way to the opening NorAm/SuperTour the following weekend in Canmore. But, the main goal of the event was to provide one or two extra race days for 300 young regional skiers.

The National Team is committed to a hands-on approach. They are modeling best-practices and enhancing institutional knowledge by working directly with clubs at lower levels of the development pyramid.  Recently, Bråten, along with some National Team athletes, assisted with club youth and masters programs during an  on-snow camp at Sovereign Lake before the NorAm/SuperTour kickoff. High Performance Manager Joel Jaques, who is also the waxing lead for Canada, hosted a waxing talk and demo for the local coaches and athletes. (The FIS announcement claiming they will implement a fluoro ban next season came four days before the demo and changed the planned content, as applying powders will not be required next season.)

Another (apparent) first this season is having full National Team members who are outside the Canadian system. Sam Hendry attends the University of Utah and Rémi Drolet studies at Harvard. 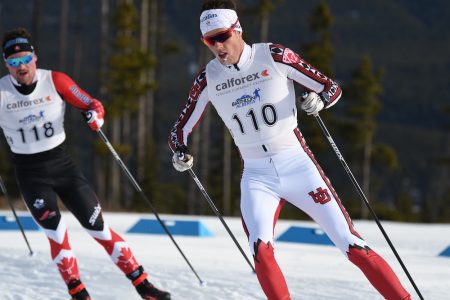 “This has provided me with some awesome opportunities and an incredible team,” Hendry wrote during Nordiq Thunder. “It was really nice for me to have the chance to come home and ski on snow in Frozen Thunder especially with the lack of snow in Utah.”

Utah is a perennial powerhouse — winning the NCAA team title in 2017 and 2019. Utah is (relatively speaking) close to Canmore, which makes it easier for Hendry to connect with his home team.

“Sam is at Utah, so he has a personal coach, but I’m communicating with Miles [Havlick, Utah’s coach],” Bråten said, “and we have a good relationship.”

Harvard might be a top school for physics, but it is less well known as a skiing centre. 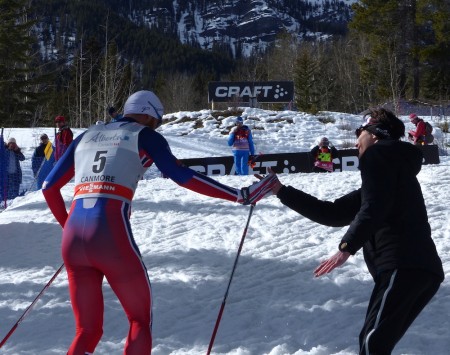 “On paper, Rémi is by far the best skier [at Harvard],” Bråten told FasterSkier, “but I think he sees that value of having that team around.”

Those paper results include ranking 7th of 23 North Americans in the 2019 World Cup final mini-tour in Québec, narrowly edging out American Gus Schumacher as the top overall junior.

“At Harvard, we are lucky to be led by head coach Christopher City and assistant coach Jefferson Tucker, ” Drolet said. “They are fantastic people, as well as coaches, and I have very much enjoyed working with both of them this fall. I am also continuing to work very closely with my coach at Black Jack, Dave Wood, and I am also talking regularly with Canadian National Team head coach Erik Bråten. I have to say that it is interesting to be working with four different coaches, but things have been going well so far, and everyone seems happy to collaborate in making sure my preparation for the season is as good as it can be!”

While Canadians view Harvard as a more expensive education than local universities or full-ride scholarships at NCAA schools, Drolet explained the reality at one of the top-ranked physics programs in the world.

“As an Ivy League school, Harvard College offers neither academic nor athletic scholarships. However, they do offer financial aid scholarships which ensures that all Harvard students pay what their families can afford without going into debt.

“This program has worked out very well in allowing me to pursue an education, which from the outside, is often viewed as having an excessively high price tag.”

Drolet has an ambitious racing calendar, which doesn’t include Nationals even though it is just four hours drive from his hometown.

“The college racing circuit starts for real in mid-January with the Harvard Carnival.  Afterwards, I will be racing at the UVM Carnival/Supertour in Craftsbury, followed by the Canadian World Junior Trials Races at Mt. Sainte-Anne.”

The easiest path to qualify for World Cup starts is a top result in Mt Ste Anne, as that weekend has two routes to selection.

“If all goes well at trials, I will hopefully be headed to Germany for the World Junior Championships after racing at a few more Carnivals,” continued Drolet. “I would also be very happy to qualify for some more World Cup starts during the North American circuit at the end of the season, and if there is time for it all, I would love to go to the NCAA Skiing Championships in Bozeman, Montana.”

While this might sound easier than the full NorAm/SuperTour schedule, it’s coupled with demanding academics.

“Training long hours at university while attempting to stay competitive with all of the students who may not have such a major commitment outside of school is certainly a challenge, but it is one that Harvard has allowed me to meet successfully so far.”

Asked about the National Team working with US schools going forward, Bråten had a simple answer.

“This is one of the questions where I will be most likely listening more than I’m speaking when we take a decision.”