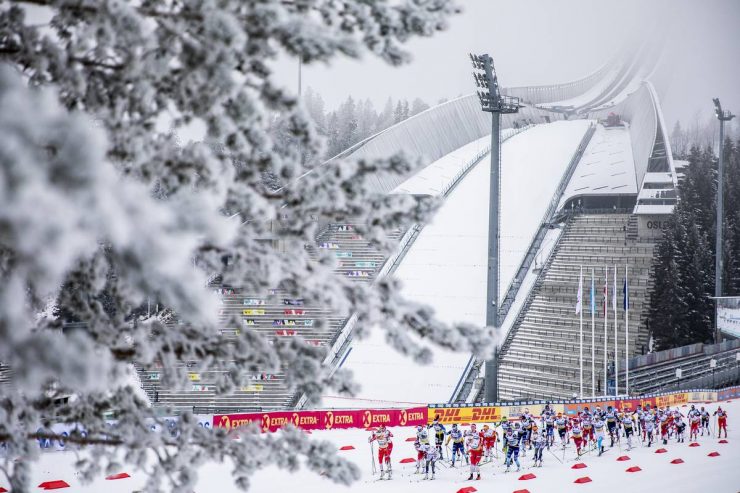 A quieter and more serene Holmenkollen stadium area with fans banned from much of the course. (Photo: NOrdicFocus)

Racing the Holmenkollen without spectators is a bit like not getting a white Christmas. It does not change the end result, here racing a 30-kilometer mass start classic race on the famed tracks above Oslo, Norway. But the experience loses some of the magic.

Race organizers announced Thursday that spectators would not be allowed to attend the race due to the increased risk of spreading COVID-19. On a typical year, crowds in numbers up to 100,000 per day take the tram from the city center to the venue, where they either pay to sit in the grandstands or they post up in the woods, often drinking and cooking over a fire.

Though the stadium was empty, some spectators did choose to watch the event from the woods, but their numbers were not close to the norm.

Matt Whitcomb, U.S. World Cup Coach, however, wrote this in an email, “The Holmenkollen stadium, which can at times boom so loudly we can’t hear our own shouts to the athletes, was a ghost town today. But the people did not stay home; they moved to the forest. The woods were as loud as I can remember. It was a great fan turn-out.” 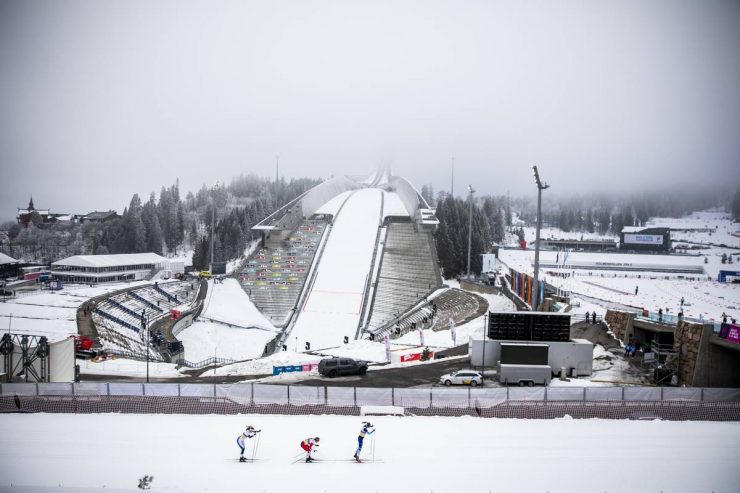 A empty feeling through the main stadium. (Photo: NordicFocus)

If you’ve ever skied the tracks at the Holmenkollen, you’ve probably uttered a humbled and exhausted expletive somewhere along the way. The climbs are long and unforgiving, and the downhills can be lightning fast.

Unsurprisingly, Norway’s distance champion Therese Johaug looked to be running away with the race. Within the first 10 k, Johaug gapped the field with flawless technique by 25 seconds. She took the maximum of 15 bonus points at each checkpoint, which happened at 3.7, 9,9, 16.1, and 22.3 k. 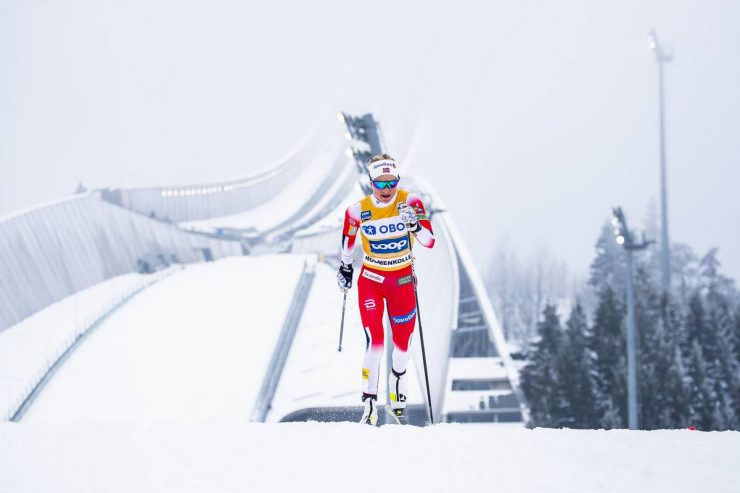 Therese Johaug off solo, it what looked like a typical runaway win for the Norwegian. (Photo: NordicFocus) 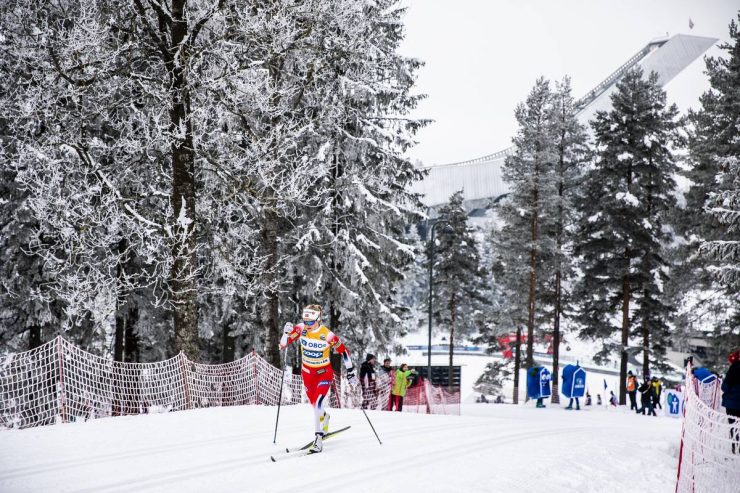 Therese Johaug and her off-the-front move that looked like it would stick. (Photo: NordicFocus)

Behind her, a large chase pack worked together in a race for second place. With less than ten k to go, the top-20 were within 8 seconds of one another. As the final round of bonus points drew near, Sweden’s Ebba Andersson and Frida Karlsson surged to the front and broke away, steadily cutting Johaug’s lead in half by the 26.3 checkpoint.

They had chosen to switch skis before the final lap, and it was evident that their kick and glide were superior to those around them. Johaug, however, had not changed skis or taken her last opportunity for a feed. 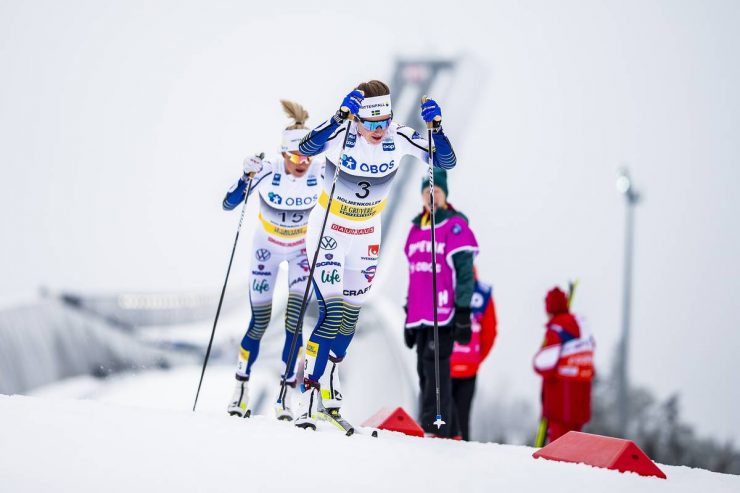 This is where things got interesting. After skiing alone for 28.5 k, suddenly a figure appeared in the screen with Johaug. That figure was Karlsson who was closing hard from less than ten seconds behind.

It became a matter of real estate. After another kilometer, Karlsson was only five seconds behind. But there were only 2 k left.

Up the final long climb and inside the final k, Karlsson marked Johaug from the tails of her skis, switching lanes near the crest of the hill and dropping into a tuck to take advantage of the speed of her skis. Johaug stayed in her draft, sneaking back around before the final roller.

But Karlsson had the superior speed in the final sprint, leapfrogging the Norwegian and creating a gap in the lanes to win the race in 1:22:19.1. Johaug crossed 1.9 seconds behind and immediately congratulated her young opponent  on her effort. 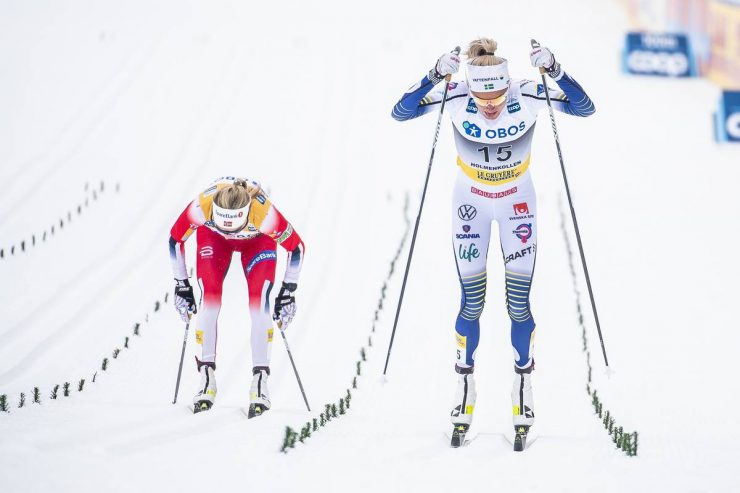 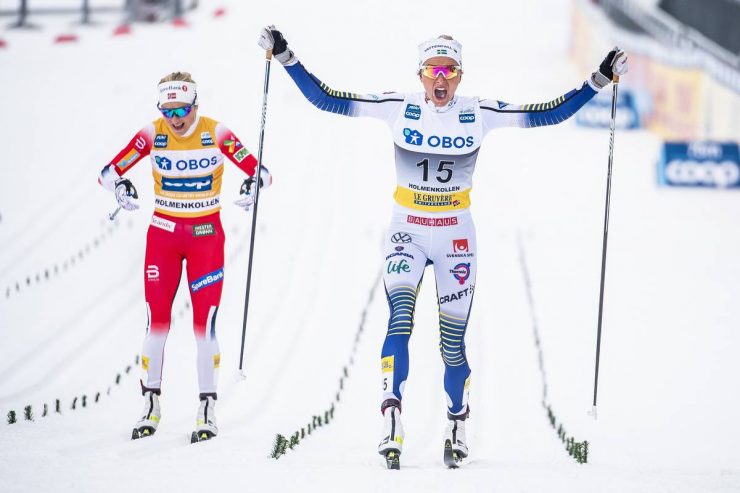 Karlsson for the win. (Photo: NordicFocus)

Karlsson’s excitement about her performance was clear as the 20-year-old hugged her teammates and jumped into a coach’s arms, somewhere between laughing and crying.

“I felt so good today,” Karlsson told FIS emphatically. “I had great skis and I think it was a winning concept to change skis and have new fresh ones. I felt so strong in the end and I was hunting and heard I was taking time on Therese. In the end, I felt like ‘now I am going all the way’ and it was a success.” 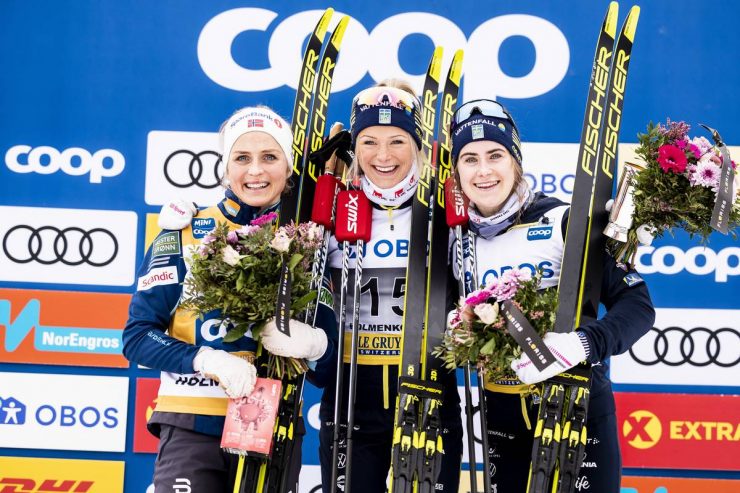 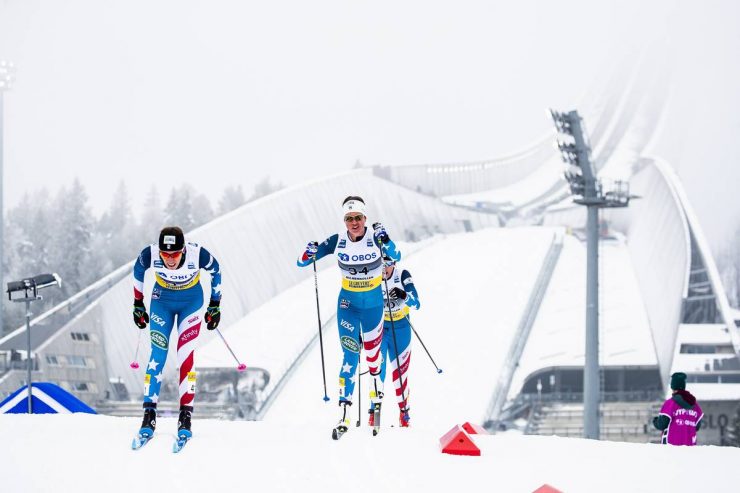 Below we have included a post-race interview with Caitlin Patterson in which she discusses some frustrations with her race.