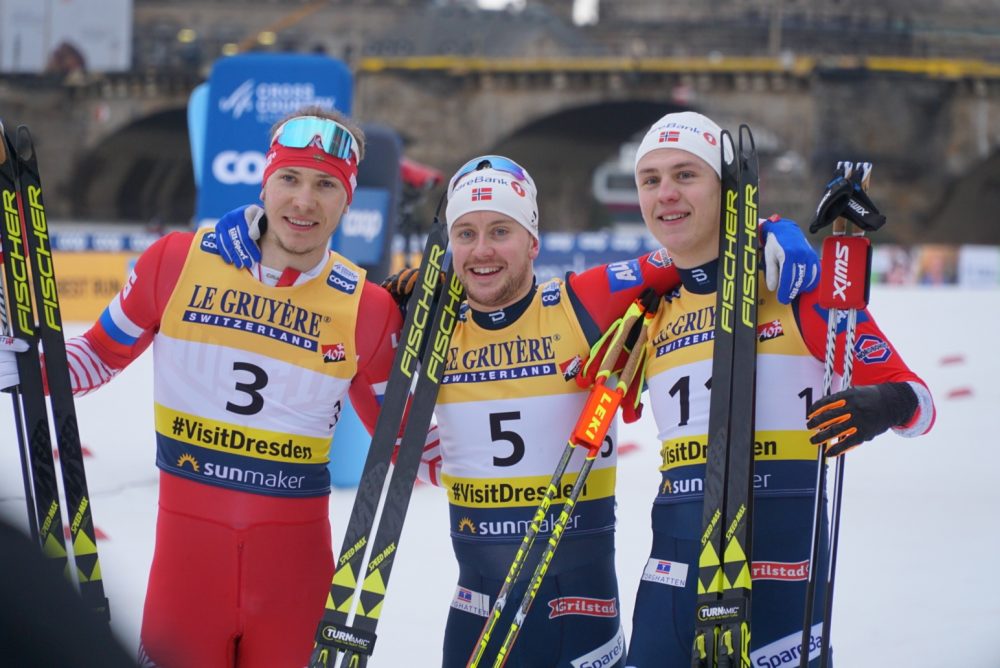 The white ribbon of snow created a stark contrast to the green grass and gothic architecture along the bank of the River Elbe for the second year of city sprints in Dresden, Germany. As is typical in these events, the 1.6-kilometer out and back course was predominantly flat with a few short hill punches and a 180-degree hairpin turn at the halfway mark, where the race seemed to truly begin. The nature of the course challenged skiers as there was little opportunity for recovery, and as always, a small margin for error.

Last year in Dresden, Italy’s Frederico Pellegrino upset a seemingly unbeatable Johannes Høsflot Klæbo in the men’s sprint, going on to win back-to-back the next day in the team sprint as well. This Saturday, after he won the qualifier in a time of  3:21.12, the question quickly became whether or not Pellegrino would remain king of the track in Dresden.

Heading into his quarterfinal, Pellegrino appeared to employ the same patient tactics which paid off for him in 2018. The Italian skied calmly in the middle of the pack for the first half of the course, moving slowly ahead after the hairpin. Coming into the final hill just before the finishing lanes, Pellegrino surged to take the lead, stepping on the ski of Frenchman Baptiste Gros as he passed by. Holding onto the lead, Pellegrino crossed the quarterfinal in first ahead of Norway’s Pål Golberg in second.

Due to the hangup with Pellegrino, Gros staggered, losing momentum, but stayed on his feet heading down to the final stretch, crossing the quarterfinal in third. More excitement ensued as the two Russians in the heat, Alexander Terentev and Andrey Krasnov, caught their skis on the pine boughs that were used to line the course and mark out the lanes and crashed in the final meters before the line.

It was ruled that the hang up caused by Pellegrino was an obstruction, earning him a yellow card and relegating him to last in his heat. He finished the day in 30th position.

With Pellegrino out of the running and Klæbo sitting out the races in Dresden to recover from his overall win in the Tour de Ski, focus shifted toward Sindre Bjørnestad Skar and Erik Valnes of Norway, Lucas Chavanat, who took third in last year’s Dresden city sprint, Baptiste Gros, and Richard Jouve of France, and Gleb Retivykh of Russia, all of whom are ranked highly on the overall sprint World Cup standings.

In the first and fastest heat of the semifinals, Skar and Retivykh jockeyed for the lead throughout the race, Skar punching ahead on the final hill, but Retivykh bested him in the final meters with a time of 3:32.58, just 0.14 seconds ahead of the Norwegian. Both Jouve (+0.20) and Gros (+0.53) advanced as lucky losers. Everyone in the first heat skied a faster time than the skiers in the second wave. Advancing from the second semifinal was Valnes (3:37.72) and Chavanat (+0.15).

As the men faced off in the final, it was anyone’s game through the first half. Rounding a turn late in the race, Gros caught his ski on a V-board lining the course causing him to fall, taking Chavanat down with him. Left standing, Skar and Retivykh again dueled for position, eager to be first to the top of the final roller. Skar attacked at this seemingly pivotal spot, positioning himself just ahead of Retivykh. The Russian fought back, not willing to relinquish the victory until the very end when Skar threw his foot forward for the win with a time of 3:25.94.

“It feels good to be the winner today,” Skar told the International Ski Federation (FIS). “It is my fourth final this year and I’ve been number four, and number five, and number six, so to be on the top now today, that’s a very good feeling.”

Despite the man-made snow and warm and wet weather leading into the race, the event coordinators were able to produce a solid and fast track for the athletes.

“Yesterday was unbelievably sugary and was 8 inches deep by the end of the testing period,” Matt Whitcomb told FasterSkier in a call. “Today they were able to take advantage of salting because it had gotten warmer and it had rained a little bit so that added moisture which allowed the salt to react with the snow an make for a very hard surface.”

“I think the conditions of the track were very good,” Skar told FIS. “But of course with the headwind up to the U-turn, it is hard to be in the front and it’s a lot of tactics, but that’s the same for everyone so you just have to go with it and try to be up there.” 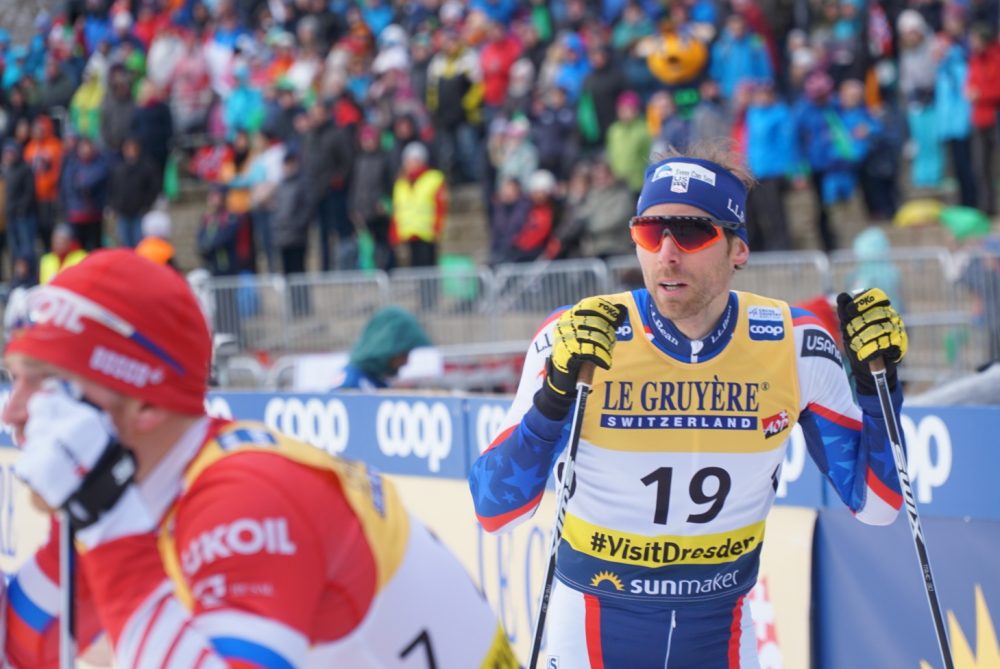 In his return to World Cup skiing after racing the domestic circuit, American Andy Newell qualified in 19th (+5.58) and ultimately ended the day in 25th. The second North American to finish in the top 30 on Saturday, Kevin Bolger (USST), qualified in 28th (+6.76) and finished in 29th overall.

Both Bolger and Newell  raced in the third quarterfinal, along with Jouve, Norwegians Eirik Brandsdal and Gjøran Tefre and Russia’s Artem Maltsev. Jouve won the quarterfinal in a time of 3:28.24, while Newell crossed in fifth (+1.31), and Bolger sixth (+1.45).  ending the day in 25th and 29th respectively. 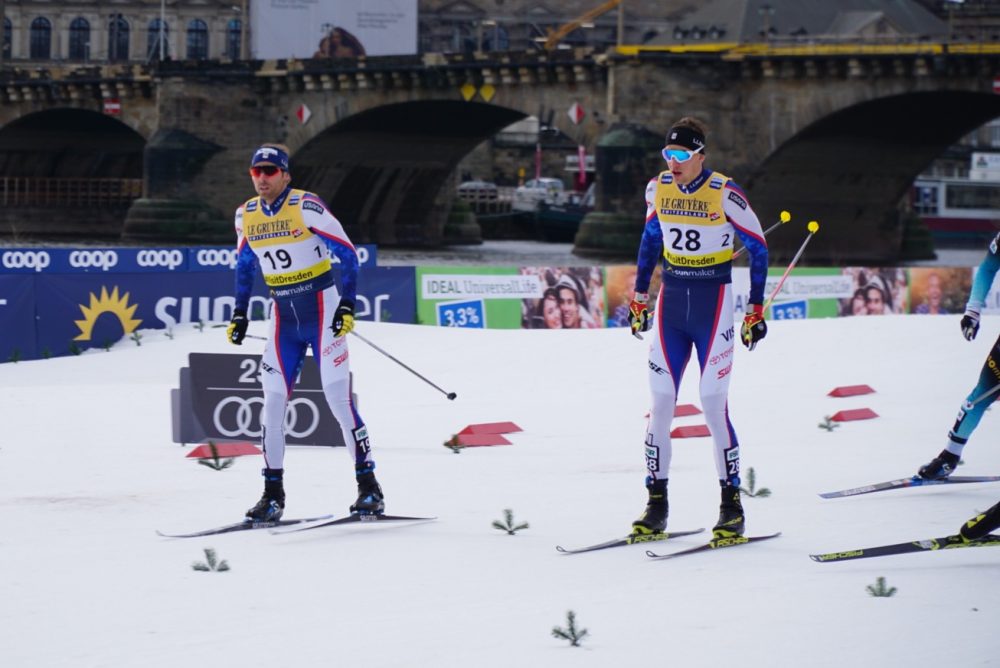 “We had Simi Hamilton get sick on Thursday, which was disappointing because he’s been feeling great, qualifying really fast, ready for big results,” said Whitcomb. “But, we decided to bench him this weekend, so it was awesome to have Andy jump in as a replacement and qualify for the rounds with Kevin Bolger. Putting two guys in there, having only started four wasn’t too bad for us.”

After racing 12 seasons as a U.S. Ski Team A-team member, Newell has stepped back this season to spend more time racing domestically. However, Newell did not see this move as retirement from international competition. World Championship qualification still remains on his agenda.

“It feels good to be back,” Newell said during a phone conversation. “You know, your first World Cup of the year, you don’t know what to expect. I was hoping to do a little bit better than I did today. It’s always hard to jump on a plane and come over and race, but I think it was a good start. 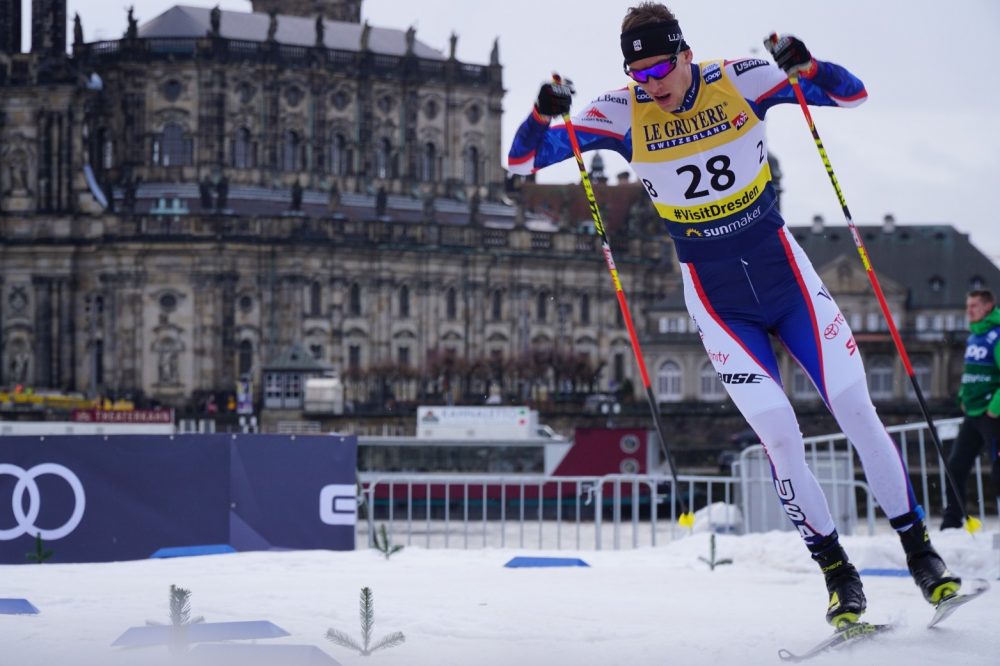 “I think we had good skis and I felt pretty good in qualification and I felt like I did what I needed to do to get to a good position,” Newell continued. “Then I think I maybe forgot how aggressive it is in the last 200-meters here compared to some other races. I remember last year I was taken by surprise by how much contact and how much jostling goes on up and over the last little bump and into the lanes. I think I was caught by surprise again this year. Even though I was in a great place with good energy, I just ended up getting ping-ponged around a little bit.

“On the World Cup here you can’t give anybody an inch,” he continued. “They’ll take advantage of that because the competition is so tight. So I think that’s kind of where I messed up today, but it’s good to check in and see how the speed is going and see what I need to work on if I am going to come back over and race later in the year.”

The final American in the race, Erik Bjornsen, finished in 33rd in the qualifying round (+7.43). Simi Hamilton did not start due to illness.